The canal system of western Europe is very extensive, and this network was built (largely in the 1800’s) to form an artery for commercial freight traffic. It is pleasing to note that there is still a huge amount of freight transported on the larger canals of northern France, Holland and Germany. Why is this pleasing? Not solely for romantic reasons, but particularly because water transport is a very fuel-efficient way to move bulk loads. Recent studies have shown that at present fuel prices a barge carrying 250 tonnes of freight competes equally with road freight – and we can be sure that fuel prices are only going to rise! 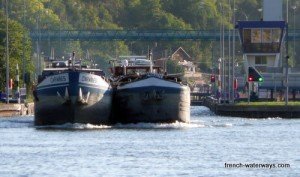 In the “hay days” of barge transport, tens of thousands of working barges were plying their trade. In the second half of the 1900’s, however, this trade reduced considerably. Smaller barges were less economic, and many went out of business and were broken up. Similarly, many of the smaller canals went into decline, some of them were even closed.

The evolution continued. In the early 1960’s, people started to explore the French canals in their own boats; fifteen years later, the first hire boats appeared, and within a very few years the first hotel barges appeared. Little by little this water-borne tourism developed – hire boat fleets became more numerous and the number of hotel barges also increased. At the same time, the French government realised that the potential for tourism on the inland waterways was huge and largely unexploited, and work was done in many areas to improve the canal infrastructure – pleasure ports were established, facilities were added, in some cases canals were re-opened after being closed for a number of years.

This growth of water-based tourism has gone unchecked. Now, every year over 330,000 visitors come to France to enjoy a holiday on a boat of some kind, and the industry is worth around 352 million euros a year. The figures for this success story might appear off-putting to the discerning traveller looking for an exclusive and special vacation, but do remember that France has 8,500 kilometres of navigable inland waterways and so it is very easy to find the calm and peace that should be associated with a holiday on the water! Even more important , though, for those seeking an “off the beaten track” holiday, is to carefully select the actual canal. On our hotel barge the Saint Louis we call the area in which we operate our “hidden corner of France”, and there are days in which we cruise without seeing another boat moving on the water! 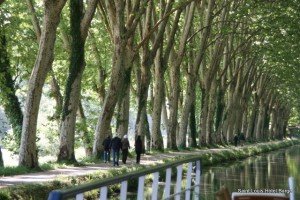 The effective re-cycling of some barges from their freight-carrying life to their tourism life has been an interesting phenomenon. You start off with a barge that has a very sound hull and excellent machinery, designed for constant daily use on the canal system, but redundant because of changes in transport economics. In place of the cargo hold you can install accommodation – bedrooms, saloons, kitchens, bathrooms. The original space was huge, and you have the opportunity to create accommodation that is high-technology, including central heating, air conditioning, en-suite bathroom facilities, and so on. In the early days of hotel barges, things were far more basic. Passengers on a hotel barge then would be likely to sleep in bunk beds, and to share one bathroom with all other passengers, finding hot or cold water as if by lottery. Nowadays, you can find some distinctly luxurious barges. On the Saint Louis, for example, you will find luxuriously appointed cabins with single beds or queen-sized double beds, with individual, spacious fully tiled bathrooms, and with a saloon that is fully panelled, that has a solid hardwood bar, and that has original barge etchings around the walls. The standard of maintenance and the attention to detail all contribute to the ambiance of luxury.

Interior of the Saint Louis

What would a guest on a luxury hotel barge expect to find? Why would this be a holiday of a lifetime? Why is a barge holiday different? The answers to these questions lie in looking at the overall package. Certainly, the barge itself would be luxuriously appointed, elegant, and pristine. Secondly, the gourmet food, the quality wines, and the caring professionalism of the crew would impress on an hour by hour basis. Thirdly, the daily excursions to well researched places of interest would add a richness to the holiday. But – beyond everything – the way in which a hotel barge cruises the canals provides the essential – and irreplaceable – backdrop to a barge holiday. By this I mean that the barge travels very slowly and quietly through the French countryside, all manoeuvres are carried out slowly and gently, the view is constantly and slowly changing, daily and hourly planning is looked after by your crew, the word “relaxation” takes on a new dimension, and you start to absorb and appreciate what we call the “Zen Factor” of barging. 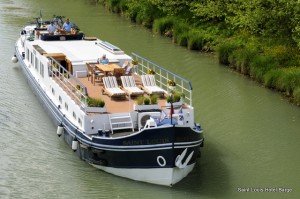 Cruising on the Saint Louis