In south-west France, in the valley of the River Garonne, there is a small market town called Valence d’Agen. We have reason to know Valence very well, since the Canal Garonne passes through the outskirts of the town, and on the first of our two itineraries our hotel barge the Saint Louis passes this way, between stops at Pommevic and Lamagistere. Sometimes we stop in the small port, and our guests can explore the town with its two market squares and its three Romanesque lavoirs.

Every year, in early August, Valence d’Agen is known for an entirely different reason. The port is transformed into a theatrical set with a traditional village created on either side of the canal. Tiered seating for an audience of 2,500 spectators is constructed. Lighting and sound is installed. Ancient carts are made ready, and ancient cars are polished. Costumes are prepared, actors are rehearsed. Valence is ready to enchant once again. 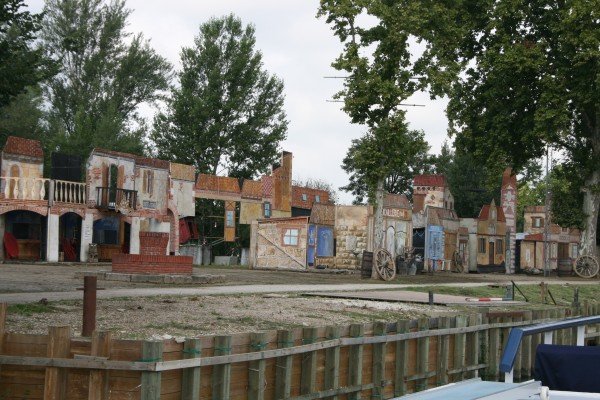 With our guests, we have just visited the 18th production of Au Fil de l’Eau – une Histoire. Each year this extraordinary spectacle is presented on eight nights in the first two weeks of August. It could be called a son et lumière, but this would be a cruel understatement. Au Fil de l’Eau is a story, a history, a tragedy, a comedy. There are scenes that are poignant. There are scenes that are gripping. And particularly there are scenes of outstanding beauty, where the whole audience gives off a whispered “wow”.

It is possible to simply buy tickets for the show, and to arrive shortly before nightfall to enjoy the spectacle. Much better, though, is to take part in the pre-spectacle long-table traditional meal, and to become a real part of this extraordinary evening. During the meal, you will be served by people dressed in costume whom you will later recognise as actors during the spectacle, and you will be entertained by accordions and barrel-organs, and by a group of workers called “the forced workers of the threshing machine” who are keen to share their jokes and their wine with you. Outside, you will find a wide range of entertainments and exhibits. A magnificent cart-horse is coupled up to a working cart, while the action stops so that a couple of children can have their photographs taken beside the huge animal. A team of volunteers are working sheaves of wheat through a threshing machine. A basket-maker is busy working his craft. A variety of vintage cars are to be found, some of them 100 years old, being shown off by their proud (and very knowledgeable) owners. And there is a group of Occitane dancers, entertaining the public to traditional dances from this part of France. All this fair-ground atmosphere serves to entertain, to help pass the evening until nightfall, and to “warm up” the audience to the period of the spectacle they are about to witness.

The action takes place on three “stages”. There is the far side of the canal, where the main part of the village is set up. There is the near side of the canal where scenes take place that allow the actors to take their show into the audience. And there is the canal itself, where five separate boats are used to present different themes and actions, including the iconic scene at the beginning and the end of the spectacle, where the narrator and his three young charges glide in their punt through a laser-lit tunnel into the past or the future. 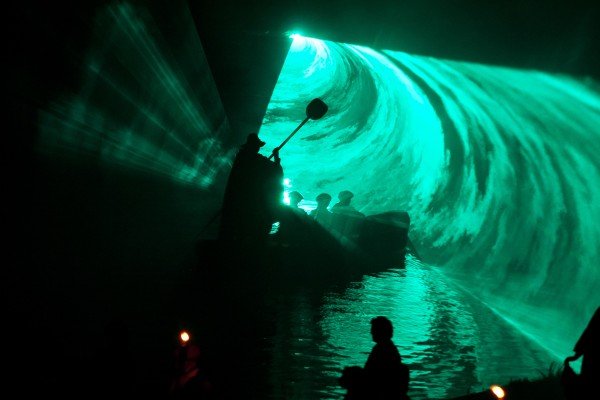 The story-line of the show is not complex. It is the simple story of the lives of three lads who were born locally in the late 1800’s, with the various events that highlighted their lives including the first and second world wars. This simple theme allows all sorts of scenes to be woven into the spectacle. For example, there is the gossip of the village women doing their washing at the canal’s edge, and there is the engagement and marriage of one of the three friends. One favourite scene is the bustling market, where comedy comes to the fore with one actor bringing a live piglet into the audience, while another who has stolen a live chicken manages to escape into the crowd and to fool the police into arresting an innocent member of the audience.

The opening scene is stunning. After the initial journey of the narrator and the three boys in their punt in the tunnel of time, everything goes dark for some seconds, and when the dawn music is introduced and the overall lighting is gently increased the audience see three hundred and fifty actors arranged in groups throughout the set. The actors are frozen, like statues. Some ten seconds later, the music changes and all the actors come to life.

One of the great things about Au Fil de l’Eau is that it is such a community achievement. All the actors are volunteers. Even though we live an hour’s drive from Valence d’Agen, we had a great sense of belonging. For example, in the winter months Barbara dances with the group who were doing the Occitane dancing, I knew the staff on the stand of the Donzac Conservatoire, we met in the audience a farmer who lives just a hundred yards from our house, and one of our French guests recognised that the man carrying the pig was the President of the regional tourist organisation. As an art form, as a cultural experience, and as a way of providing real insight into the life of the past in this part of France, we will always be delighted to bring our guests on the barge to this spectacle. In a way it is the inside knowledge of such an event that is important. Slow Travel becomes even richer when our guests discover this astonishing show.