On our first trip to Italy in 1994 we spent three weeks based in Montecatini Terme, a spa town in Tuscany about an hour from Florence. Barbara and I were told about Lucca, a small city just a little further to the west. We had never heard of it. For many years Lucca had escaped most of the onslaught of foreign tourism that blanketed Tuscany’s more famous towns. We have been back to Lucca many times over the years and have watched it grow in popularity, but in spite of increased tourism it always seems to hold onto its laid back elegance. 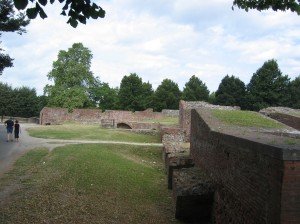 A battlement along Lucca's wall

One of Italy’s most pleasant cultural aspects is the passeggiata. Nearly every town has one. It is a leisurely stroll at a given time and place where people of the town turn out to see and be seen. It is a wonderful custom. Although Lucca’s main passeggiata seems to take place in the evening along via Fillungo in the heart of the town’s shopping district, another passeggiata of sorts takes place throughout the day, enjoyed both by Lucchese and tourists alike, along the defensive walls that circle the entire city. Construction on Lucca’s walls began in the early 16th century. These are not just your normal Tuscan city walls -THESE ARE WALLS!! They are wide enough at the top for a park-like affair, with a broad tree-lined path with benches on either side and lawns and playgrounds for children. One of the most popular things to do in Lucca is to walk, jog, or ride a bike along the 4 kilometer loop. There is almost constant activity. The walls were originally built to protect Lucca from invaders, but they now provide the city with its own unique ambiance and ritual. 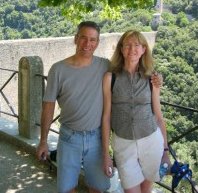 Matthew Daub is a professional artist and university professor with works in major public and private collections throughout the United States and Europe. He has been leading plein air painting workshops in Italy since 1994. In 1999, Matthew and his wife Barbara formed Arts Sojourn as “a vacation for artists and their friends.” The program is designed to appeal to artists of all levels as well as non-artists who enjoy the company of creative people in a slow travel format