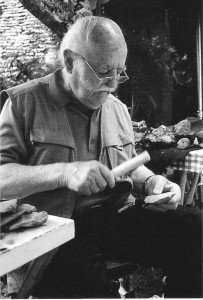 Rene Castanet, who Steve and I always think of as ‘M. Cro-Magnon’, died peacefully at home on the 28th February aged 90. His passing is a great loss, but how fortunate that his granddaughter, Isabelle has a similar passion to her grandfather’s and has been continuing in his footsteps for many years and is set to continue to do so. The first in her family to formally qualify in Archaeology (she studied in Paris), the site of Castel Merle which has been in her family for five generations is in safe and caring hands. Furthermore, she is mother of two lovely children who are showing signs of being just as empassioned as their Mum, Rene, Marcel and those who went before.

Here are some of Steve’s thoughts:

His last piece written for visitors to his museum only a few days before he died, was the story of someone living in the Abri Blanchard at Castel Merle who had made sign-notes on a fragment of mammoth ivory which would become a lunar calendar.

“One could imagine that as a Cro-Magnon intelligent, curious, searching and an artist, who, very probably, sat every night in front of his shelter to engrave in fine details on his little plaque the changing shape of the moon in its successive, regular phases from its rising to its disappearance behind the other side of the valley”.

All these qualities were Rene’s. He was enormously proud of being a Cro-Magnon and 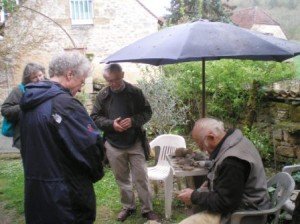 Rene knapping in his garden

continued his explorations in archaeology throughout his life. One of the very last of the self-taught farmer/archaeologist/scholars, his intellect was quick and immensely generous – a wonderful role model for modern scholars. He insisted that what was found at Castel Merle should be archived there – for how else could researchers really understand this site? He also made it an absolute principal of his or anybody else’s research at Castel Merle that results should be published – shared not hoarded, so that we could get to know better and better those distant ancestors of ours.

A truly memorable experience for Judie and I, early in our life in the Vezere Valley, was when Rene took us round the site of Castel Merle. He wasn’t just passionate, but so deeply informed and knowledgeable about this as well as so many other sites.
He pointed out the spot where nearly 80 years before, his father Marcel had discovered a baby buried in a shell of red ochre, dating from the boundary of the Aurignacian-Gravettian periods. Rene brought an even greater richness to this discovery – he talked of George MacCurdy the great Harvard professor, giving him bars of chocolate! 5 minutes later he was showing us photos of this and other scenes from the 20’s and 30’s in his private museum.

This Ice Age ‘treasure house’ he would let me explore as and when I wished He allowed me to remove artefacts from the glass cases to handle and discuss. The effect of this generosity on us, our friends and guests is beyond my ability to describe. Rene himself would point out extra details not with a laser, but with one of his own Gravettian-style points stuck with birch glue to the end of a wand! 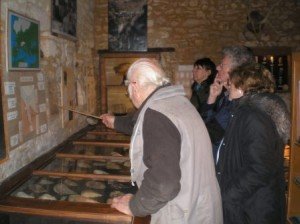 Rene with his ‘home-made’ pointer!

There wasn’t a day, he reckoned, since his childhood that he hadn’t knapped flint either at Castel Merle or in his garden at Sergeac. Seeing Rene working with flint in his garden, where he also had a collection of birds nests!, including some from Bower Birds from South Africa, next to the old Templar church, where he had excavated two Visigothic graves, in Sergeac, where he had been mayor for 42 years, we know we had had a hugely privileged snapshot of this French ‘agriculteur’ (his description of himself).

We are enormously proud to be called friends of Rene. Guardian and researcher of the sites of Castel Merle he pursued with passion and talent the legacy of his father, Marcel. A great man who left his mark on the story of Prehistory and great men never die!