The longest day of the year (21 June) seemed an appropriate day to take a walk through prehistory.

My route started from the Laugerie Cliffs across the river from Les Eyzies. Maybe several hundred Cro-Magnon people (our ancestors) had spent a couple of months during the Ice Age winters, hunting, trading, marrying, sharing ideas and beliefs that produced the art at Font de Gaume and Les Combarelles.  From there I walked around the big bend in the Vezere to the oldest site in our valley, at la Micoque. Evidence is there that some 320,000 years ago ancestors of the Neanderthal people had hunted a herd of horses over a cliff and then butchered them. Their larders would have been full that night! 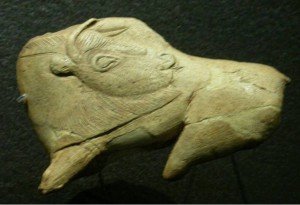 A magnificent piece of Ice Age art from La Madeleine

Another hour through the woods saw me above La Madeleine, admiring the stunning views up and down the Vezere above the emblematic site of the Magdalenian Culture which produced most of the cave art and some of the most stunning representations of the animals of the Ice Age.

Crossing the river I skirted the Parc Prehistorique at Tursac – somewhat surprised to hear the roar of a mammoth – trapped by Ice Age hunters?!  Then onwards and upwards to the highpoint of the walk – views across the river curling through the valley down below on this, the longest day of the year. Stopping to check my route, I realised that I was on top of the limestone pavement that 34,000 years ago would have had a few stunted bushes on it and would have been a lot colder than today’s blistering heat. 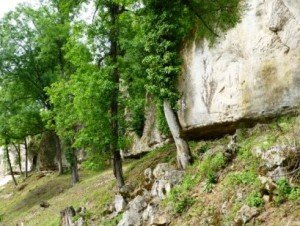 Down below in the Valley of the Rocks at Castel Merle maybe some of the earliest humans to visit the area would have been scouting out rock shelters that in a couple of months time would accommodate the tents of the hunters and their families, waiting for the arrival of the reindeer – the event around which their year revolved.  The last great hunt of the year before winter closed in providing valuable life sustaining food and materials for shelter and clothing.  The seemingly endless herds of reindeer went the Vezere Valley from the mountain pastures where they had spent the summer, migrating to their winter feeding grounds on the plains.  From here the older reindeer at the head of the herd would smell and see the water down below.  They would remember that in this little valley they could come down off the high waterless plateau, cross the river and there would be water and fresh grass available.

My walk had spanned tens of thousands of Ice Age years and had crossed the tracks of the Neanderthal and Cro-Magnon people.  I had seen rock shelters where they would have lived during their time in this valley. I had indeed walked through time finishing by coming down a steep cliff track (made by Electricite de France to access their power lines!) through a landscape at first sight very different from the Ice Age.

Nevertheless in its underlying structures it is the same place our ancestors would have known so well as they came back to the Valley of the Rocks year after year. 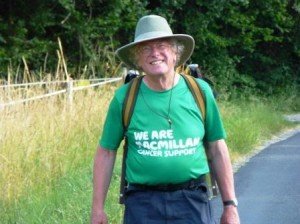 My path took me a few more miles up the valley where Judie greeted me with several cold beers!  As I rested my aching feet, I contemplated my 30+ kilometre walk through prehistory in 30O heat and wondered how challenging this walk would have been for our prehistoric ancestors?  They must have been leaner and fitter than the majority of us today!  It was a great day out in the Vezere Valley which not only added to my store of knowledge of the area, but was great preparation for a good cause – my September Challenge in the Atlas Mountains of Morocco when I will be raising money for Macmillan Cancer Support. Every donation, large or small, is appreciated.  As a well known UK supermarket says “every little helps”!