This was the trip we’d been promising ourselves for several years – it was on our ’must do’ list and thanks to a Ryanair seat sale and cheap airfares, we headed to Santander at the end of our season. Altamira was the big star attraction as it was the first of the Ice Age painted caves to be discovered. We based ourselves in Puente San Miguel and quite by chance, this is where Don Marcellino Sanz de Sautuola, the discoverer of Altamira, had lived. It was a good base for us – easy access to the autopista (motorway) and only a short distance from the spectacular Cantabrian coast – the Costa Verde – the favourite holiday destination of the Spanish royal family. 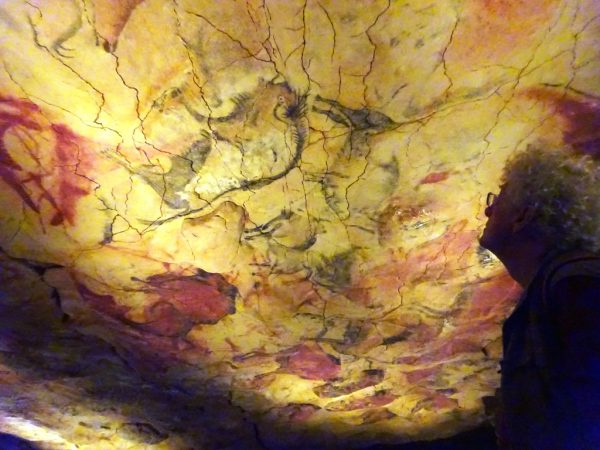 It was definitely worth the trip – these caves are at least as impressive as ‘ours’ (ie those   in the Vezere Valley, France).

The sites of some of the caves are exceptional – for example, Covalanas, high above its valley, El Pindal on the coastal cliffs in an area rightly known for its exceptional beauty. El Castillo and Las Monedas – with Monte Castillo (Castillo mountain) towering above the town of Puente Viesgo, is honeycombed with prehistoric art caves. 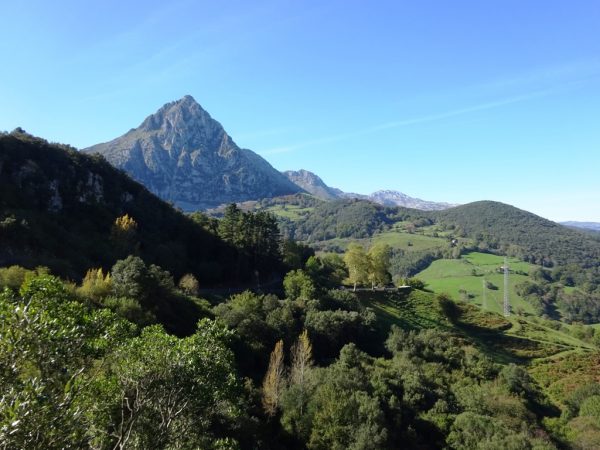 A stunning view of San Vicente from Covalanas

It is very easy to get around. The coastal autoroute is free and fast, though the numbering of the exits is somewhat idiosyncratic (or it was to us!), though probably perfectly logical to the Spanish. We had a bit of an adventure finding our accommodation – we arrived late at night in unfamiliar territory and roamed around the countryside before finding our destination. No doubt it’s because of experiences like this that our visitors say how much they appreciate being collected from the station and after the first visit of the Tour and an ‘apero’ (aperitif) chez nous (at our home) they are taken to their hotel! Easy.

We discovered an alternative to the autopista – the old meandering coast road with spectacular sea views including crashing Atlantic breakers hammering against rocky headlands and utterly fabulous beaches. 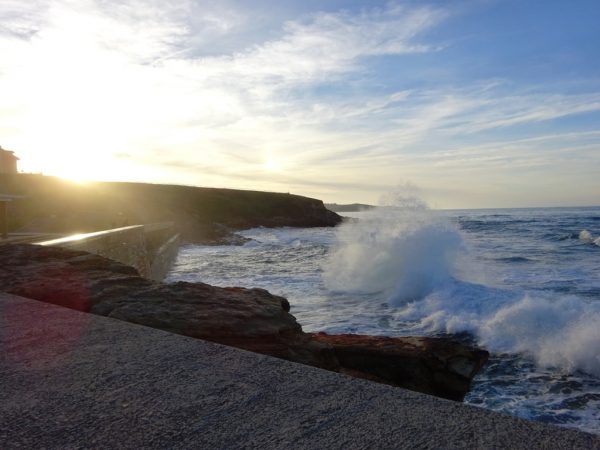 Our favourite was the Playa de Poo(!) at the end of a small ria (fjord) – it was practically deserted so we had it’s golden sands and rocky fringes almost to ourselves on a warm sunny day at the end of October. Wonderful -and there’s a good café too! 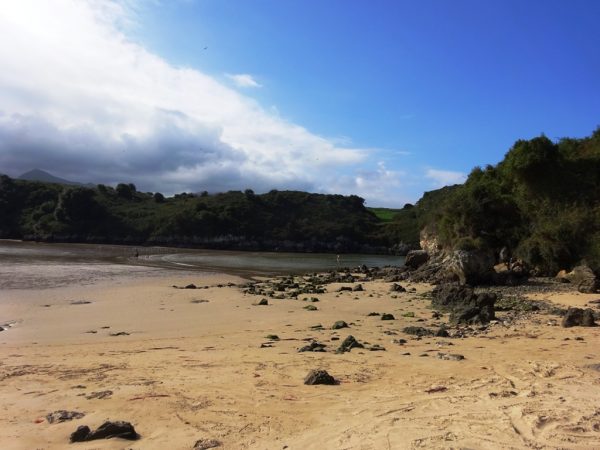 As an alternative to cave art we discovered a summer palace designed by the Catalan maestro, Antonin Gaudi. His Capricho was built for a rich lawyer who returned from Cuba to his home town of Comillas. It is completely ‘over the top’ – a minaret-like tower, the whole building covered in ceramic sunflower tiles. – and was very unpopular with the locals when first built. We dubbed it ‘gaudy Gaudi’!  but it is an incredible house and its many hidden features were enthusiastically revealed to us by our passionate, volunteer guide, Claudia. She demonstrated how the bells incorporated into the window sashes in the music room jingled when slid up and down! Showed us the slightly eccentric window blinds – in one room, 3 different types one folding, one sliding and a sideways roller blind! There are two Charles Rennie Macintosh fireplaces – an influence from far away Glasgow in Scotland! 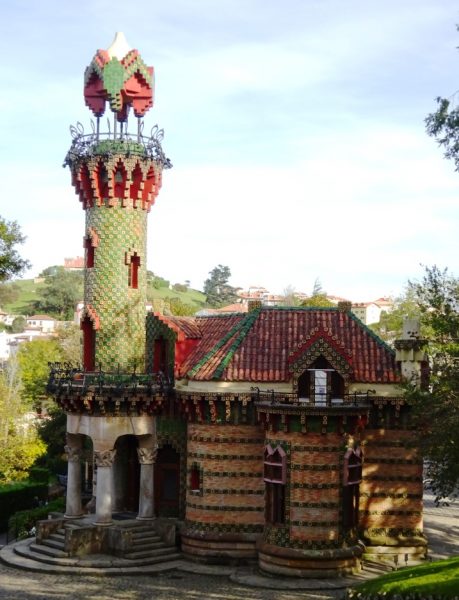 Altamira was just 15 minutes from where we were staying – and it would have been worth the trip to see just this one cave (even if it is a facsimile). The art is disconcertingly similar to Lascaux – certainly the Great Chamber with its ceiling covered in multi-coloured bison, was reminiscent of the Hall of the Bulls. The facsimile – the Nuevocueva (the new cave) is superb. In many ways it is a better visit, we are told, than the original a few hundred metres away. They’ve recreated the cave mouth so you really get the feel of it being lived in – and the daylight illuminates the art. We were able to spend as long as we wanted in the Great Chamber and could even take photographs. We boggled at the wonderful art which seemed to spin around over our heads. Some of it is older than Lascaux, some of it 2,000 years younger, sealed up by rock falls about 13,000 years ago, waiting for Maria and her father, Don Marcellino, to discover it in 1879. There is also an excellent Museum on site which explains the prehistoric cultures of Cantabria and the Asturias regions. 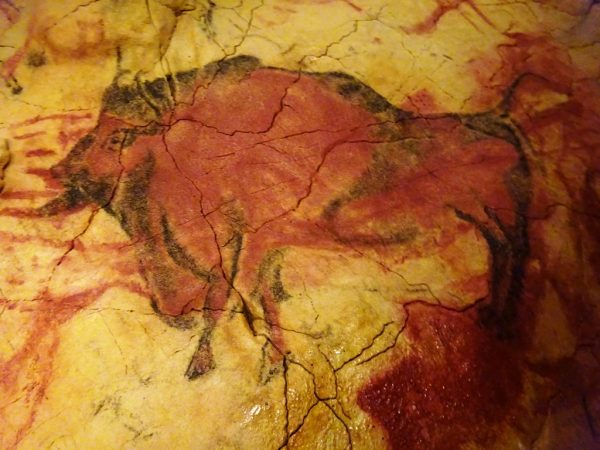 The regional prehistory museum (MuPAC) in Santander is one of the very, very best exhibitions of its type that we have seen. Brand new, using the latest techniques and the most up-to-date research to inform visitors in a remarkably empathic way. It is built under one of the old markets and there are any number of tapas bars around when you emerge in need of sustenance as we did. 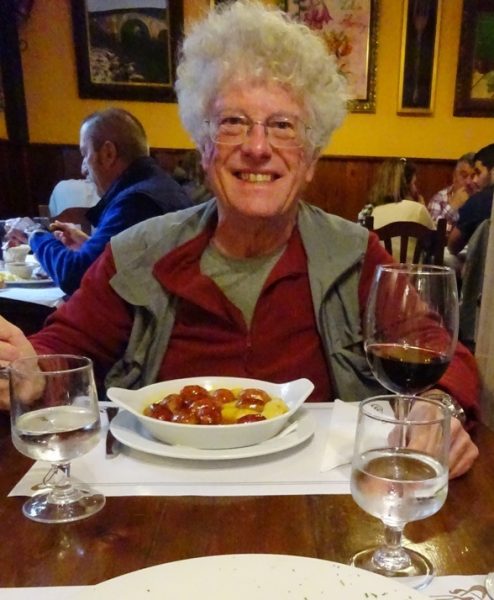 Steve about to tuck into spicy Spanish chorizo at Meson Rampalay

Another big plus for the caves of northern Spain are their entry prices. Open all year, they are very cheap – 3 or 4 euros in many cases – because they are publicly owned, but prior reservation is often necessary.

We certainly hope to go back – there is more to explore yet. The Picos de Europa are beckoning to us – as is the food, especially the fish, seafood and cheeses – superbe!