Where were you on Monday 28th September – the night of the eclipse?  Tucked up in bed maybe! Steve certainly was as he was guiding the next day, but I (Judie) was in England for a few days and saw the eclipse in Christchurch, Dorset on the south coast. I wish Steve had been there to share it! 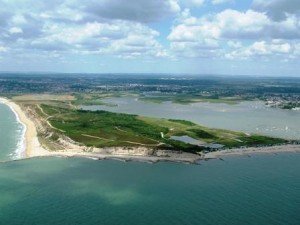 I decided to go down to Mudeford Quay which is on the opposite side of Christ-hurch bay from Hengistbury Head – as well as an Ice Age hunting camp it is also an Iron Age hillfort which has been occupied and visited by people for more than 12,000 years.  It would have been a hive of activity during the Iron and Bronze ages particularly.  Usually at sunset the Quay is a popular spot for photographers to record spectacular sunsets over Hengistbury and I was surprised that not another single soul was there on the night of the eclipse! It made it seem even more special to be there. 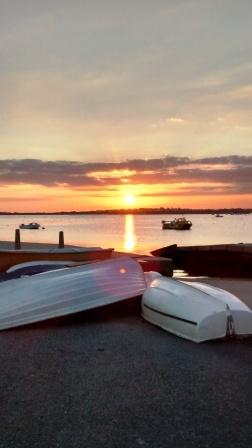 I wasn’t sure what to expect as I walked down at about 3.30 in the morning. My first sight of the moon over the trees was a dull, shadowed disc in a dark sky, the streets were dark, no street lights and there was an eerie feel. Should I be wandering around on my own? I pondered, but I felt compelled to stay around and see what happened and the Quay seemed the obvious place.  So with the help of a flashlight, I made my way down to the seafront.  Earlier the sea had been ‘storming’ up The Run – the gap where the rivers Avon and Stour meet and mingle with the sea – but now it was quiet and placid. The world seemed still, no sound of seabirds, no lap of the waves. Bizarre.

Gradually a glimmer of light appeared on the left hand side of the moon as I looked at it, just the merest hint of light. As the minutes ticked by, the sliver of light increased in size and I realised that I was actually seeing the earth’s shadow moving across the moon almost imperceptibly. This rare phenomenon, last seen in 1980, set me thinking.  I was looking across to Hengistbury Head – what would our ancestors have made of this disappearance and reappearance of the moon? Was it a message from the gods? Had they displeased them? What should they do? Make offerings? A sacrifice?  I guess everyone would look to the ‘wise man’ (or woman) for reassurance and answers. But could he or she give them any?  How relieved they must have been when the moon fully emerged again! What of a solar eclipse – how terrifying would that have been?  A lunar eclipse perhaps passed unnoticed whilst people slumbered – but if the sun disappeared? Few could miss that happening. Was it terrifying?  Or did they instinctively know what was happening? Maybe reassured by knowledge passed down through the generations – by whatever means – inherited memory possibly.  Perhaps such events were used as ‘markers’ in time – before or after the time the sun/moon disappeared/reappeared. 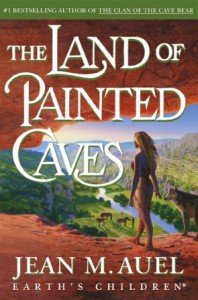 Jean Auel’s book ‘The Land of Painted Caves’ is set in the Vezere Valley, France.

Jean Auel describes at length Ayla’s lunar observations in ‘The Land of Painted Caves’ – perhaps basing her lunar calendar on the one from Castle Merle here in the Vezere Valley.  The sequences appear to be regular – what if a phenomenon like this had occurred during the observations?  Why were the phases of the moon recorded by an inhabitant of the Abri Reverdit at Castel Merle? What did they make of it?  As usual with anything to do with archaeology, there are more questions than answers.

As I stood watching the moon reappearing and the light increasing I was suddenly aware in the lessening gloom that swans were gathering in a spotlight created by the moon.  It seems strange seeing swans on the sea. They have been in Christchurch harbour ‘forever’ (swan bones were found in Glastonbury and dated back to Roman times, so they’ve been in the area for a long time).  It was as if they had been drawn to the illuminated spot. As the moon re-emerged I could see them more and more clearly. They were very peaceful and tranquil, scarcely moving. They’d glided out of the shadows and seemed to be basking in the pool of gradually brightening moonlight.  What were they making of the night’s happenings, I wondered? 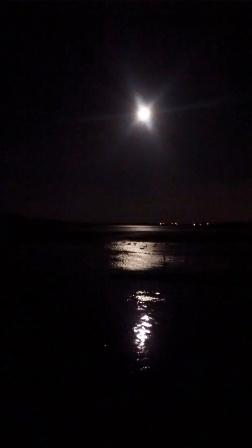 Swans basking in the returning moonlight at Mudeford Quay

It felt as if the world was waking up again from its unnatural slumber and as I walked back through the streets, rerunning scenes in my mind, there was no need for a flashlight with the moon shining at maximum power! What a wonderful experience this had been.