Readers of my regular entries in these columns will know that we operate a luxury hotel barge in south west France, in the Garonne Valley.   You will perhaps have read tales of the wonders of this area – the food, the wines, the people, some of the visits that we do from the boat – as well as the charm of the canal itself.

The Canal de Garonne stretches from the Atlantic Ocean to Toulouse.  In Toulouse there is a canal basin, and here you can take another canal right down to the Mediterranean Sea.  This second canal is the Canal du Midi. 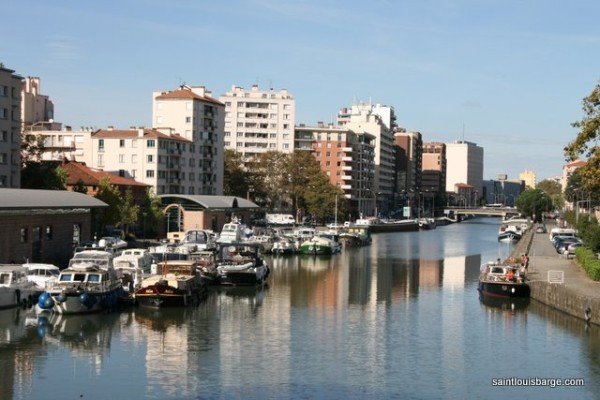 Port Saint Sauveur in the middle of Toulouse

We have just played a part in a ‘Barge Show’ that was held in Capestang, which is a small town way down the Canal du Midi, not far from Narbonne.  The last such show was held seven years ago in the port of Carcassonne, and that time we took our barge the Saint Louis to the show.  This time the distance was much greater – it would have taken us at least ten days each way to take the Saint Louis there and back, time we do not have in this busy period while we prepare the boat for the coming season.  Therefore, we went to the Show with a static display – and the Saint Louis stayed at home! 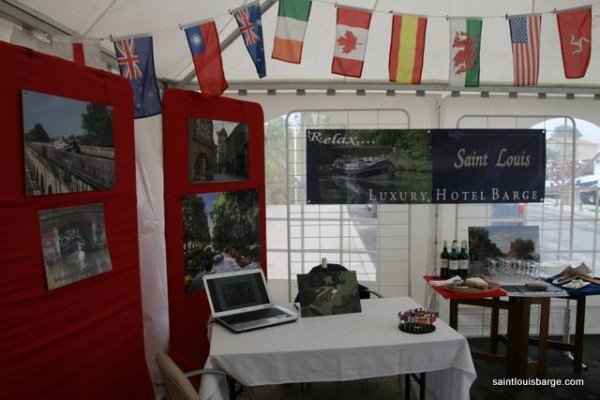 Part of the Saint Louis stand at the Show

There are many more hotel barges on the busy Canal du Midi than there are in our quiet waters, and twelve Midi barges were tied up in the port.  This was a great opportunity to renew contacts and friendships with agents who travelled from all over the world to be at the Show.  It was also a great opportunity to get together again with the ‘community’ of barge owners and operators – to discuss with them shared problems, to look at design details following any makeovers that have been done, and in general to share experiences.  Although we, on the Saint Louis, operate independently, it is very valuable to maintain good contacts within the industry.  For example, simply on the subject of staffing we were able to meet crew members who have worked with us in previous years, we were able to discuss crew matters with a specialist barge crew recruiting business operating near Narbonne, and we were approached by some very impressive crew people who are looking for positions later this year.

We also met a number of new agents, people whom we had not met before, some of whom were new to the ‘industry’ of hotel barges.  For us, however,  the opportunity to network with other barge operators was the big benefit of the Show, particularly considering that the vast majority of our bookings are direct with our guests – only a small proportion of our bookings come through agents. 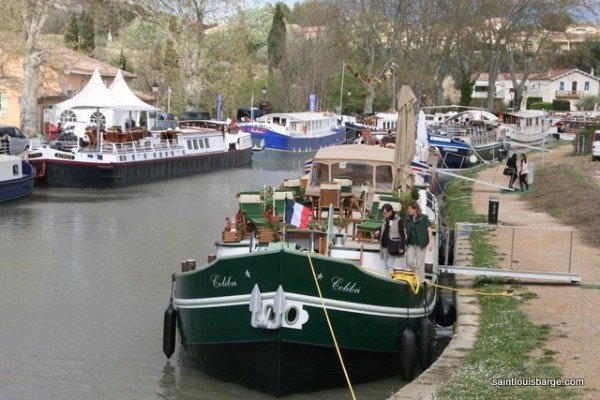 Capestang Port during the Show

Capestang has a special significance in the history of our ownership of the Saint Louis.  When we bought the boat, nine years ago, she had been working up in the north of France, not far from Dijon.  We did the delivery run down the rivers Saone and Rhone, and along the canal system that borders the Mediterranean, and the previous owner was with us for the delivery trip.  The purchase agreement that we had drafted stated that the agreement would become valid once we had passed through Capestang Bridge, which is known for being the meanest and tightest bridge on the whole canal.  We passed, with about two inches to spare on either side, but the point is that we only wanted the Saint Louis to work the tranquil waters of the Canal de Garonne, so we had to get through the bridge.   If we had not been able to pass through the bridge the previous owner would have had to take her back to Dijon! 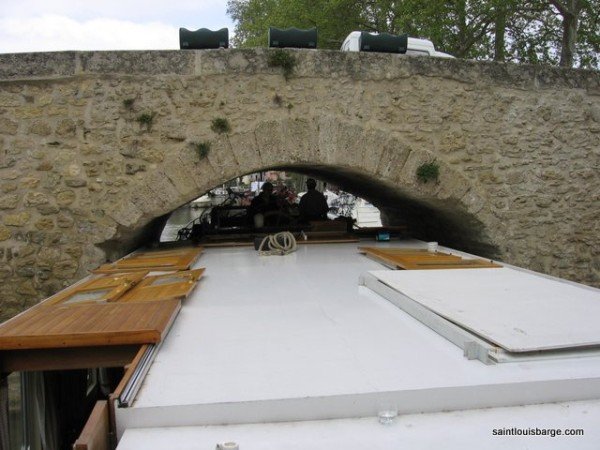 On the face of it, it may not be obvious how hotel barges may be considered as being a form of slow travel.  Consider, however, the average day on a hotel barge.   In the morning you cruise at walking-speed down the canal, giving you time to savour the changing landscape, and to chat with people on the tow-path.  For lunch, you are treated to a beautifully prepared meal made from fresh local ingredients, accompanied by award-winning local wines.  In the afternoon you go on foot or by car with the tour-guide from the boat, visiting one or more places that are selected for their local interest – many of these places are not available to other travellers.  Then for dinner, a sumptuous and beautifully crafted dinner completes your perfect slow-travel day. 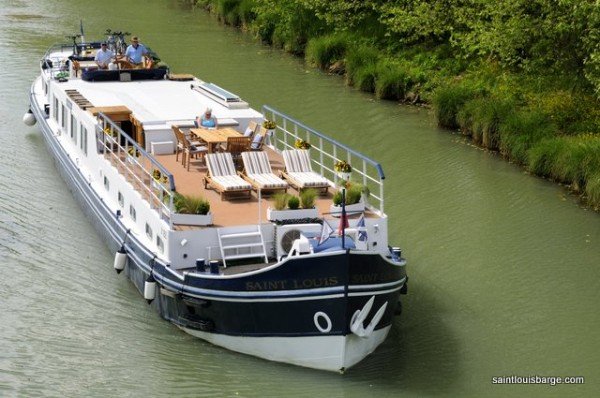 The Saint Louis cruising on the Canal de Garonne