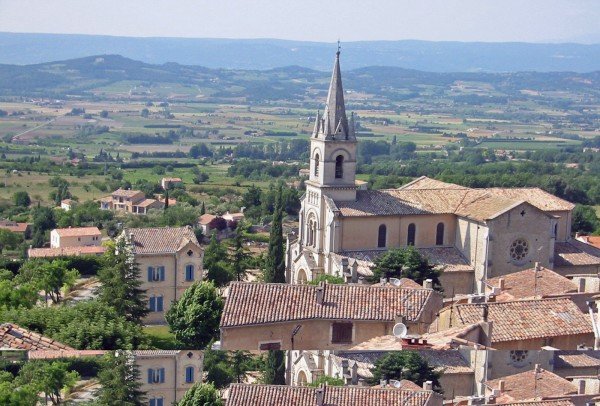 We first visited Provence for a week in early June 2003. We rented a quaint stone cottage in the medieval village of Saignon. Little did we know what a life-changing week this would be! Just a year later we quit our jobs, rented our house, put most of our belongings in storage, and took our daughter Kelly out school for her sixth grade year. In June 2004 we headed to Europe for a 14-month family sabbatical that included living in Provence for six-and-a-half months, from October until mid April.

We visited Bonnieux a few times during that first week in Saignon, and a few months later, as I searched on the internet for a long-term rental somewhere in Provence, a listing outside Bonnieux drew my attention. I remembered the ancient village on the hillside, the friendly man in the boulangerie, and the festive market on Friday morning. The farmhouse for rent had a cheerful yellow kitchen, two fireplaces, a piano, and even a cat. These all seemed signs somehow that this was supposed to be our house.

And so we rented that four-bedroom 17th century farmhouse in the countryside between Bonnieux and Lacoste, an incredible experience for the three of us. Kelly attended the village school in Bonnieux, and we took her back and forth every day, sometimes even home for lunch. As we waited outside the school gates for the children to be dismissed, we began to get to know other parents and finally to make some friends. 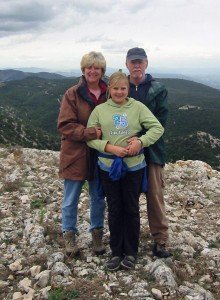 For Christmas I gave Charley a book of hikes in the Luberon. We began hiking one or two days a week while Kelly was in school. Our hiking took us out of the farmhouse, and we came to know this beautiful area intimately.

After every hike we ended up at Le Terrail, the café on the main square in Bonnieux, passing the time until the end of the school day. Despite our limited French, we started to make connections with the café staff and other regulars. Soon we were taking Kelly to lunch at Le Terrail once a week. We felt especially close to the waiter Michel.

That spring, as our time living in the Luberon was coming to an end, Charley and I explored an idea for a small group tour based in Bonnieux, a trip we called “The Luberon Experience.” We shared the idea with our friend Janice, a woman who had befriended us early in our stay, and she offered to help. A week or two before we left Bonnieux, she introduced us to Pierre, the owner of a small hotel in the village.

I was heartbroken when we left Bonnieux in mid April to continue our planned travels in other parts of Europe. But we were determined to return, and once we were back home in the USA, our plans for The Luberon Experience began to take shape. We booked one of our initial tours at Pierre’s hotel and started promoting our trips.

We’ve now hosted 27 Luberon Experience groups in Bonnieux, all but three based at Pierre’s hotel. But our connection with Bonnieux goes far beyond the weeks we’ve been there with our groups. Our family has spent numerous other vacations in Bonnieux over the past eight years: spring breaks, summer trips, and a memorable Christmas in 2010. In addition to more than six months total with our groups, Charley, Kelly and I have been housesitters and houseguests, and we’ve rented several places in the village and the countryside. Friends have introduced us to new friends, and it’s unusual for us to walk down the street or go into the café and not see a few people we know. We love the life in this little village. Some of our very best friends are there in Bonnieux and the Luberon.

For several years now we’ve dreamed of having our own place in Bonnieux, a difficult prospect with the high price of Luberon real estate and our financial commitments here at home. Then this fall an opportunity developed… not to buy, but to sign a long-term lease with our friend Pierre, for an apartment in the building he owns across the street from his hotel. It’s actually the apartment where Pierre grew up with his parents and grandparents, above what was once his family’s store. He recently restored the apartment, including installing a brand new kitchen. Pierre took me inside while they were working on it back in May… little did I realize then that it would be empty in November and ready for us to rent. It’s absolutely perfect for us: a living room, two bedrooms, a bathroom, a beautiful kitchen, and a covered terrace that looks down the little main street to the Petit Luberon mountain. 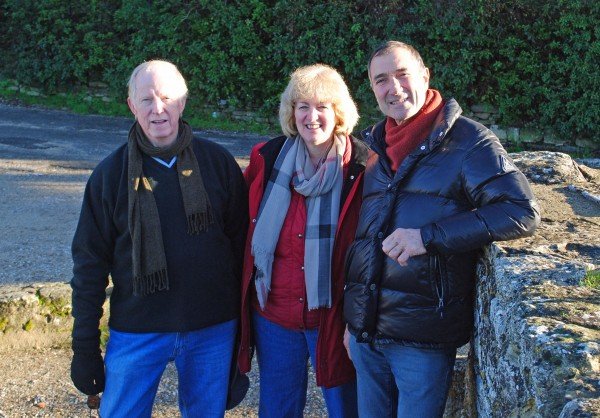 Pierre’s assistant Sophie has been such an important friend in this process. She sent us photos and video and helped us confirm arrangements with Pierre by email. We headed over in December to sign the lease, make arrangements, and furnish, decorate and equip our new home… a task we had two weeks to complete. We were lucky that the kitchen was installed, as most French rentals come completely empty. (Although we had a kitchen with appliances, we had to put up towel bars and light fixtures and will install the shower door next month.) We’ve increased our French vocabulary significantly, learning lots of new words for furniture, hardware, tools, and home décor.

Inside our Bonnieux apartment

We were lucky to have good friends like Pierre and Sophie who loaned us some furniture, offered us a place to stay until we had beds and sheets, and helped us in so many ways. Sophie went with us to set up our bank account, a process that took over two hours. We were surprised to learn we could even buy household insurance at the bank! Then she went with us to the mattress store, another process that was difficult to handle in a foreign language. Pierre helped us make the phone calls to set up our accounts for electricity and water, something we could not have done on our own. Now part-time residents, we’re having an entirely new Luberon experience! 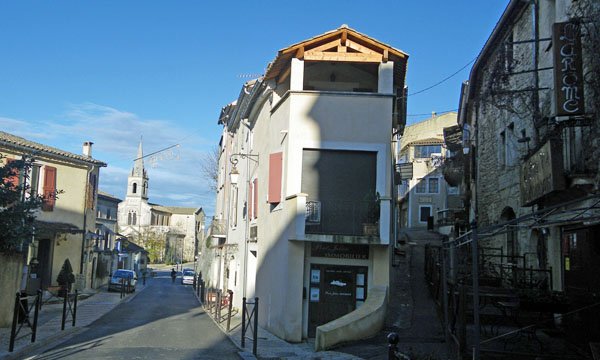 One of the most memorable moments of our recent stay was when we arrived in the village with the big white glass-fronted cabinet we bought at the brocante warehouse near Cavaillon. We planned to put the cabinet in the kitchen and fill it with colorful pottery and glasses. Charley parked our Kangoo in the Clos du Buis parking lot, and we set out, the two of us, to carry the cabinet across the street. The warehouse owner had helped Charley load it in our vehicle, and I didn’t realize just how heavy it was.

I’m not very strong. I made it maybe ten steps.

We put the chest down in the middle of Rue Victor Hugo, the narrow one-way main street of Bonnieux… just right there, in the photo above. Fortunately it was lunchtime in the off-season and there wasn’t any traffic.

We lifted the chest again and walked a few more steps, just to the edge of the street.

“No,” I said. “I absolutely cannot do this.” If I couldn’t carry it across the level street, I knew I couldn’t possibly carry it up the steps to our apartment.

We set the cabinet down on the side of the street, near the immobilier’s office. 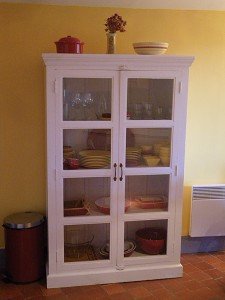 “I’ll find someone to help at Le Terrail,” Charley said, leaving me on the side of the street with our big cabinet. He knew a group of regulars would be having their lunchtime aperitifs at the bar before sitting down to eat.

Jean-Michel came out of the L’Arôme restaurant, wearing his chef’s whites. It’s one of our favorite restaurants, a very nice place. We’ve enjoyed many meals there with our groups. Jean-Michel and his wife Clara live above the restaurant and are now our neighbors.

“I will help you,” Jean-Michel said.

“But you’re cooking lunch,” I said. What a wonderful neighbor to come to my aid, in the midst of his lunch preparations. Then Charley came down the the little street with Ian, a British expat. He’s a contractor of some sort and is often found at Le Terrail. We were lucky again. Ian helped Charley carry the big white cabinet up our little street and then up the steps to our apartment. The glass didn’t break, and it was perfect in our new yellow kitchen.

We feel so fortunate to find a little home in this village that we love. We’ve spent over 18 months in Bonnieux over the past eight years, so it’s felt like home for a long time. But now that we have our own place, it’s home in a different and unexpected way.

We’re calling our apartment “Bonheur en Bonnieux” (Happiness in Bonnieux) because that’s how we feel when we’re there. Just thinking about it, writing about it now, I feel happy.

We won’t be there all the time, so we’re sharing our Bonnieux home with others. Our apartment is available for rent beginning in April 2013 and offers a great opportunity to experience life in the beautiful and authentic village of Bonnieux. See our apartment website for more photos and information.