Our family has a love affair with Provence, especially the beautiful area known as the Luberon and the village of Bonnieux. We made our first trip to the Luberon in 2003, and we’ve been spending several months a year in Bonnieux since 2004.

But how did this ever get started? Why Provence?

It all started with a book: Peter Mayle’s “A Year in Provence.”

Mayle’s famous memoir was first published in 1989, and we must have bought our first copy in the mid 1990’s. He enjoyed the book so much that in 2001 I gave Charley the BBC miniseries based on the book for a birthday gift.  Mostly filmed on location around the Luberon and starring John Thaw as Peter Mayle, each month formed the basis of one episode.

The videos sat on the shelf for a while until finally Charley and our eight-year old daughter Kelly started watching a few episodes every evening. It became a favorite father-daughter activity. Soon, they knew the characters as friends and could recite along with much of the dialogue in both French and English. 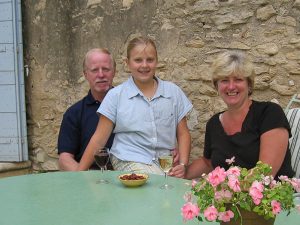 So when I started planning a two week trip to France in 2003, it was a “no-brainer” to include a week in Provence. We rented a cottage in the small village of Saignon, near Bonnieux, and enjoyed an idyllic week. We never dreamed that week would be a life-changing experience for all three of us.

The next year—as part of a 14-month family sabbatical in Europe—we rented a farmhouse outside Bonnieux for 6-1/2 months, and Kelly went to the village school. We lived just a few miles from the house where Peter Mayle had lived near Ménerbes.

After that time in Bonnieux, how could life go back to what it was before? Our lives headed off in a very different direction. Charley and I started leading tours in Provence and then other parts of Europe… I expanded our travel business to a full-time job…  we got our own apartment in Bonnieux as a second home. Two years ago our fluent-in-French daughter entered a PhD program in modern French history.

Some years after our six months living in Provence, Charley and I met Peter Mayle by chance in the nearby village of Lourmarin.

I was a babbling fan. “You changed our life,” I told him. He was friendly and very gracious… even suggested several places in Lourmarin where we might have lunch 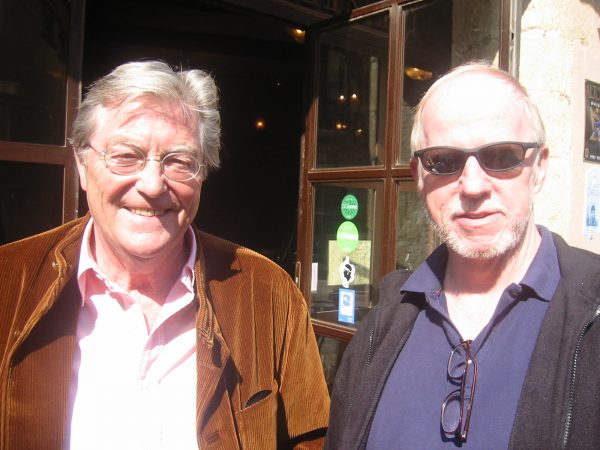 Sadly, Mayle died last year, still living in his beloved Provence. He changed not only our lives, but the lives of many others who were charmed by his books and the miniseries, and came to Provence as tourists and expatriates. A Year in Provence was the first in a new genre of travel books and also changed the economy and future of this once-unknown rural area of southern France. The book sold over 6,000,000 copies and was translated into 40 languages. Mayle went on to publish 15 other fiction and non-fiction books set in Provence. 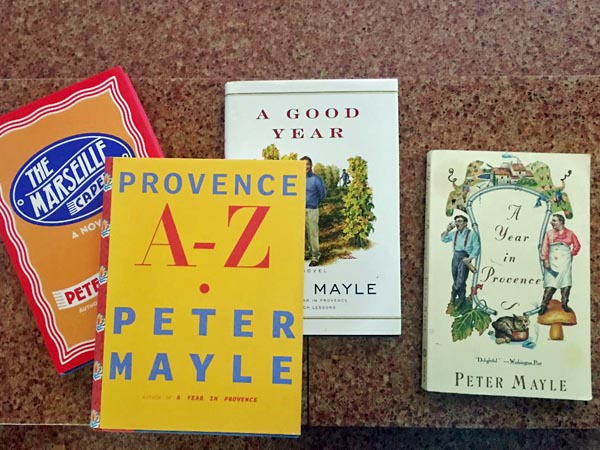 Just a few books in our Peter Mayle collection

A Good Year (a movie set in the Luberon)

One of those other Peter Mayle books resulted in a movie that also attracted visitors to Provence. Producer/Director Ridley Scott and Peter Mayle were neighbors in Provence, and apparently decided to make a movie based on Mayle’s book “A Good Year” before it was even published in 2005. Starring Russell Crowe, Marion Cotillard, and Albert Finney, the romantic comedy was filmed at one of our favorite wine estates outside Bonnieux and in other parts of the Luberon. While it wasn’t a big hit at the box office or with critics, A Good Year became almost a cult-favorite after its release on DVD and for online streaming. The critics generally agreed that the real star of the movie was the Luberon, and after watching it, many others agreed. They wanted to visit the area where A Good Year was filmed. 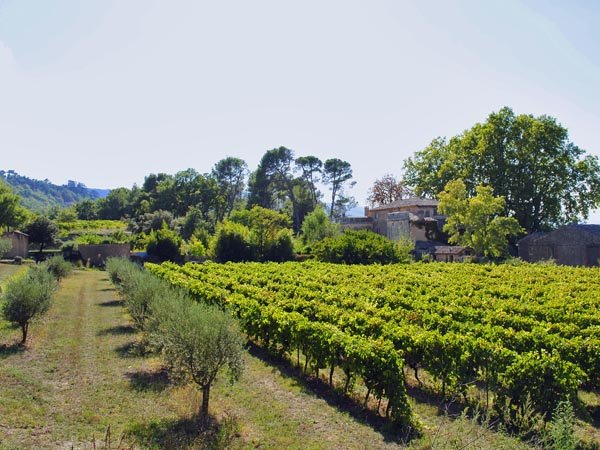 A major filming location for “A Good Year” (near Bonnieux)

That movie changed our lives too. We hosted our first two Luberon Experience tours in September 2006, a few weeks before the movie was released in theaters. The travel section of USA Today planned to run a story on the area and the movie. Their travel reporter Laura Bly was coming to the Luberon to interview Peter Mayle and found some articles I had written online. She called our home and talked to our then-13-year old daughter, who told her we were in Provence. Charley invited Laura to join us for a day with our group, which included a visit to the winery where most of the movie was filmed. It was our second-ever tour! A few weeks later Laura Bly recommended us in her feature article, along with a link to our brand-new website.

We received about 20 phone calls on the day the article came out. Over the next several years, people did internet searches on “Where was A Good Year filmed” and found our website and the special Good Year page I hurriedly posted the day after I first saw the movie. The movie gave our brand-new travel business the boost we needed, bringing us new travelers from the USA, Canada and Australia. Fourteen years after “A Good Year” was filmed, it continues to inspire travelers to come to see the special area and the winery where the movie was made.

Trailer for A Good Year (from the IMDB website)

Although we don’t plan our trips based on potential marketing help from books and movies, we’ve found they can certainly interest people in visiting an area. After all—there are so many special places to go in Europe, how do you choose one over another?  A recommendation from Rick Steves?  A place your friend or co-worker went and enjoyed? A photo you saw on Instagram or Facebook? An article in a travel magazine? Why not a place featured in a book or movie… which gave you some insight into the landscape and the culture?

Bruno, Chief of Police (books set in the Périgord)

In 2013 we began offering a trip in the Dordogne in southwest France. We named our trip The Périgord Experience after the ancient name for this area. We chose the Périgord based on our family travels… we loved its natural beauty, architecture, and distinct culture and cuisine. Centered around two rivers, with prehistoric caves and medieval castles, this area offers a variety of experiences near the interesting riverside village of Montignac where we wanted to base our week. 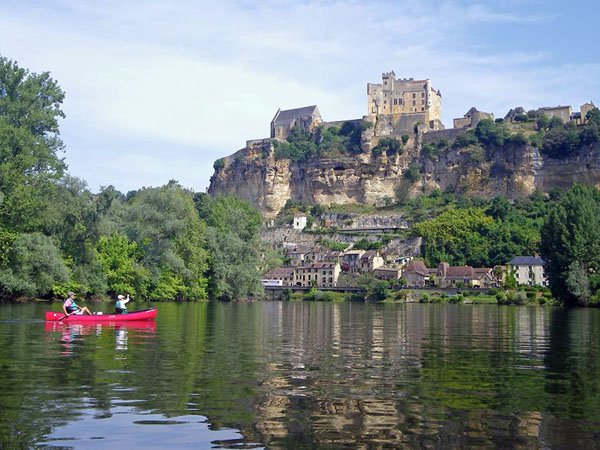 The Dordogne River and Beynac Castle

Little did we know at the time that many travelers would be drawn to our Périgord trip because of a book… a series of books actually. Martin Walker’s “Bruno, Chief of Police” books are set in an imaginary village not far from where our Périgord trip is based. Bruno is not just the chief of police… he’s the only policeman in his small village.  In addition to solving crimes, he travels around the area, falls in love, cultivates a vegetable garden, cooks delicious meals of regional specialties, and enjoys time with his friends.

Walker is well-equipped to write about this area, as he’s had a second home there for 20 years. These are fun and interesting books that also provide a realistic look at life in the remote Périgord. Book #15 in the series will be released in June 2019. We’re big Bruno fans, and strongly recommend reading the books in order.

One of our newest trips is The Cornwall Experience in southwest England, based in the small fishing village of Mousehole. This is another place our family spent time during our 14-month European grand tour. Cornwall is increasingly familiar to others because of two very-different British series: Poldark and Doc Martin, filmed on location in Cornwall.

Based on the historical novels by Winston Groome, the BBC has produced two Poldark series, one in the mid 1970’s and the current series starting in 2015. Featuring handsome hero Ross Poldark, both programs are set in the late 18th and early 19th centuries and involve the declining mining industry in Cornwall. 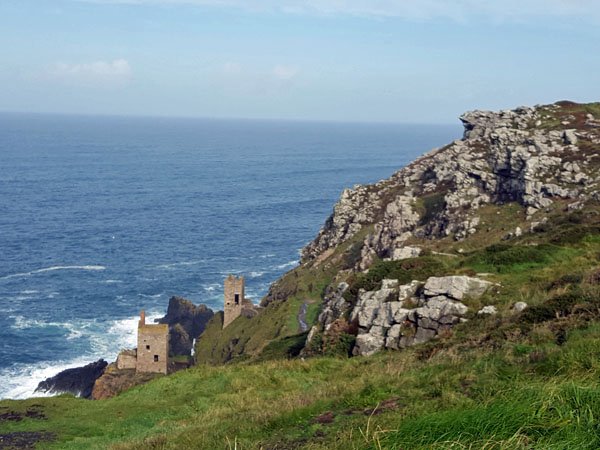 Poldark country on the coast of Cornwall

Doc Martin is an award-winning comedy-drama starring Martin Clunes, set in modern times, featuring an eccentric village doctor, his family, and his equally-eccentric neighbors living in the fictional village of Portwenn. There have been eight seasons of Doc Martin, and we’ve enthusiastically watched every one.

The Poldark and Doc Martin series also star the stunningly-beautiful Cornish coastline and countryside.  If our Cornwall travelers haven’t watched these two shows before they book our trip, we strongly encourage them to!

Other British television series that inspire me

I enjoy British television and have learned a lot from other programs. Inspector Morse, Inspector Lewis and Endeavour made me eager to spend more time in Oxford, an optional day trip during our Cotswolds Experience week. 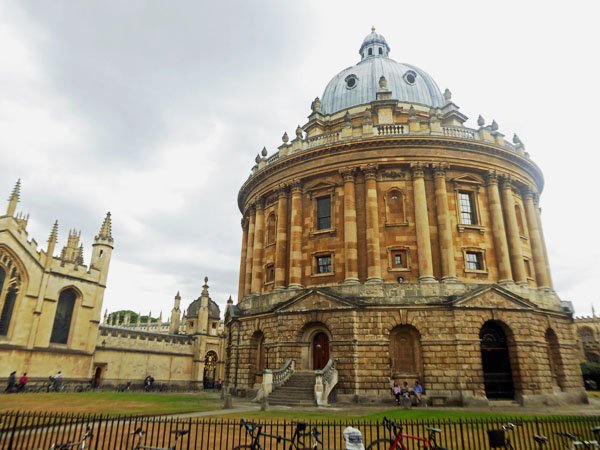 The Radcliffe Camera at Oxford University

The Father Brown television series– now in its 7th season– features a mystery-solving Catholic priest in a Cotswolds village. Much of the filming takes place in Blockley, just a few miles from our village of chipping Campden. Scenes are filmed all over the Cotswolds, including places like Sudeley Castle and Moreton-in-Marsh that we visit during our Experience week. It’s always fun to spot places we know.

“Vera” (set in Yorkshire) and “Shetland” (set in the Shetland islands 100 miles off the coast of northern Scotland) inspire me to get to know other, lesser-known parts of the UK. (I’m sure there aren’t nearly as many murders as happen in all these shows!)

The British reality show “Escape to the Country” helps city-dwellers consider their move to a rural area and helps viewers like me learn more about these areas. And I’m enchanted by the British-ness of “The Great British Baking Show,” especially the friendly competition/collaboration between these amateur bakers of different generations and from different walks of life.

Travelers on our Chianti Experience week in Tuscany will also find inspiration in books and movies.

American writer Frances Mayes is known as the “Peter Mayle” of Tuscany, with her first memoir “Under the Tuscan Sun,” later loosely-made into a movie of the same name. Mayes has been a prolific writer, often including recipes in her books and enticing others to enjoy the landscape and lifestyle of Tuscany that so captivated her heart. 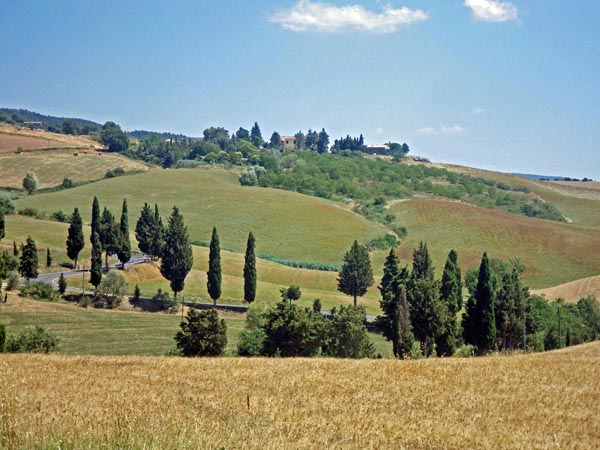 Under that Tuscan sun…

The setting of a book or movie really can be integral to the story and can inform us about another place and beckon us to visit in person. I’ve mentioned just a few books, movies, and television series that have inspired us. I’m sure you have your own list!

Many people rely on guidebooks or internet sites to help them make travel decisions. Guidebooks are important, but they focus primarily on practical details to help you plan transportation, choose hotels, and organize your itinerary. A book, movie or television program offers something different: emotion and inspiration, what many of us hope to find through travel. Books and movies can help you choose a destination that calls out to you for some unknown reason. Books and movies can help you visualize and anticipate your travel experience.

Since our very first group back in 2006, we’ve always sent travelers a specially-chosen book when they book a trip. (No surprise – our book for our Luberon Experience week in Provence is the Peter Mayle classic, “A Year in Provence.”) We also recommend books and movies to enjoy before or after each trip.

Books, movies, and tv shows: what better way to anticipate your journey and then to re-live your memories when you’ve returned home?

We’re busy getting ready to begin our 2019 season in Cornwall in April and will announce on 2020 schedule in just a few days. In 2020 we’ll offer European Experience trips in Cornwall, Provence, Tuscany, the Perigord, the Cotswolds, and Puglia. Seek out books and movies set in these special places, get inspired, and join us to experience them in person!