The French are known for their bread. Around the world, consumers appreciate the breads that are typically French, especially baguettes and croissants. Whether the French bread to be found in the far-flung corners of the globe compares with the bread to be found in France is perhaps debatable. Equally, it is debatable as to whether there is any corner of France where the culture of bread-making is as well advanced as it is in the wheat-growing rural region of south west France. 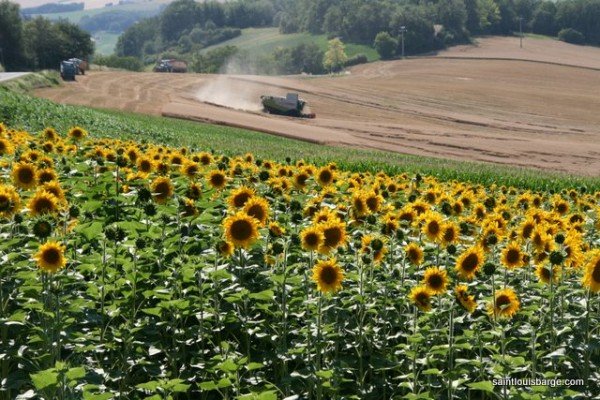 Harvesting wheat in the rolling hills of Gascony

We have been lucky, even privileged, to spend over ten years in south west France. One of the reasons why this is the case is to do with the quality of the bread that is to be found, and the overall appreciation of this locally-produced basic foodstuff.   Let me explain.   For the past nine years, my wife and I have been owner-operators of the Saint Louis, a quality hotel barge offering week-long cruises for up to six people in the Garonne valley, between Toulouse and Bordeaux. We have welcomed guests on the boat from all the corners of the globe, and we have been able to observe and, I suppose, evaluate our guests’ reaction to the bread products that are to be found here. Very frequently, our guests arrive saying that they cannot eat bread, it makes them feel ill or uncomfortable. Very often, when they see the spread laid out for them at breakfast on their first morning, they cannot refrain from sampling some of the attractive crusty breads that have come fresh from the local baker that morning. The comments that follow are almost invariably along the lines of ‘That’s really remarkable – I cannot eat bread at home, yet I have had no bad feelings at all after eating bread this morning’.

Why should this be? There can only be one reason. In this part of France, bread is made locally without additives or preservatives. It is for this reason that the bread is unacceptably hard within twelve hours of being taken out of the baker’s oven – it is made to be eaten fresh.   The culture of bread making and of bread eating is at a high level, and artificial ‘second-best’ products have no place in this discerning market-place.

Only yesterday, we went to a local farmers’ event called ‘Battage a l’ancienne’ – threshing in the old style. This well-attended annual event showed the machinery and methods that were used in the wheat harvest between the wars. As distinct from the modern combine harvester that can clear a hectare of wheat in fifteen minutes, we were treated to a look as to how it used to be, with the labour-intensive stages of cutting with a horse-drawn binder, stooking the sheaves by hand, carting the sheaves to central storage, and then threshing the sheaves to obtain the grain. The interest still shown in these old techniques is, I am sure, linked to the interest in the local production of cereals for bread-making. It is an intrinsic part of the local culture. No traditional local event here can take place without food, and the tables were laden with local products – cheese, wine, and of course a range of crusty bread. 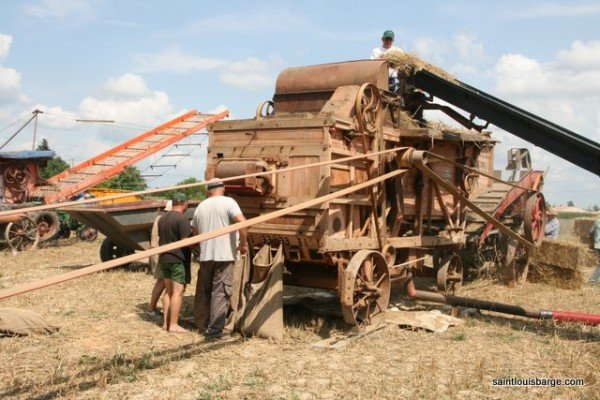 The different bread shapes and styles to be found here is impressive. You can start off, of course, with the ubiquitous ‘baguette’ or stick. (a baguette magique is a magic wand, particularly well-known since Harry Potter emerged onto the literary scene). A broader, softer version of a baguette is ‘une flute’, named after the musical instrument. There are some interesting bread types that are normally shorter and fatter than a baguette or a flute – these are the cereal bread (pain au céreals’) and the maize bread. The classic wheat bread range continues with ‘une couronne’ – in effect around six bread rolls joined together in a circle to form a crown, and the very shapely ‘épi’ – an épi is the French for an ear of wheat, and it seems fitting to shape the bread to resemble the origin of the flour that goes to make it. For the morning, you will of course find croissants – named after the crescent moon, and the two delicacies of ‘pain au chocolat’ and ‘pain aux raisins’ – pastry-type breads made to include chocolate and raisins respectively. 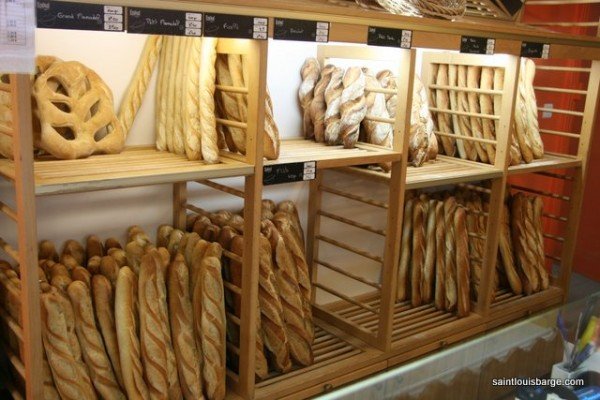 Inside a local baker’s shop – Montech

The bread types and shapes that I have listed here can be viewed as the minimum range – no self-respecting baker would dream of not having all these bread types, of course all made by hand on the premises.

Another important indicator of the importance of fresh artisan-produced bread is the fact that virtually every village, no matter how small, has at least one baker. For example, we lived for a while just outside the village of Cahuzac-sur-Vere, with a population of just 1047 people. This village has no fewer than three bakers.

On our hotel barge, our guests very often accompany the Chef on his early-morning visit to the local baker. Here they will see life as it is, with local characters coming in for their daily purchase. Some of the bakers themselves are of course dynamic and interesting people who take a delight in showing visitors their premises – this includes for example a friendly baker at Boe who still works with a wood-fired oven. The caricature of the beaming baker is often to be found in reality. 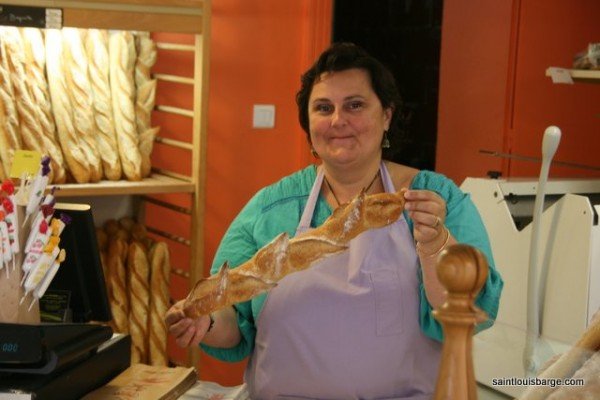 The beaming baker – holding an épi.

There is no doubt that bread is taken seriously in this part of France. Take the example of one of our lovely neighbours who on one occasion came to dinner and was shocked to discover that there was no bread on the table. He could not countenance a meal without bread, so he walked back to his house to collect a loaf from there! The bread tradition here is deep, and it is entirely in sympathy with the local agricultural traditions. With the range and quality of bread that is available, all made from locally-grown wheat, the local love of bread is unsurprising. In this context, you have to feel sorry for those of our guests who arrive on board and announce that they are on a ‘carbohydrate-free diet’. I ask you, with all of these amazing bread experiences to be enjoyed, why not just relax for a week and savour the best bread in the world? 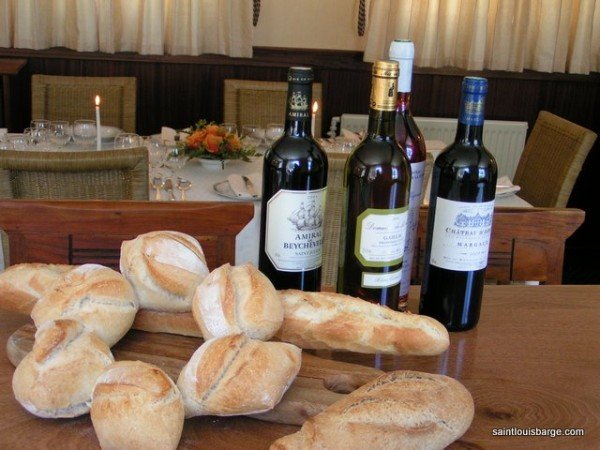 Local fare – with couronne and baguette 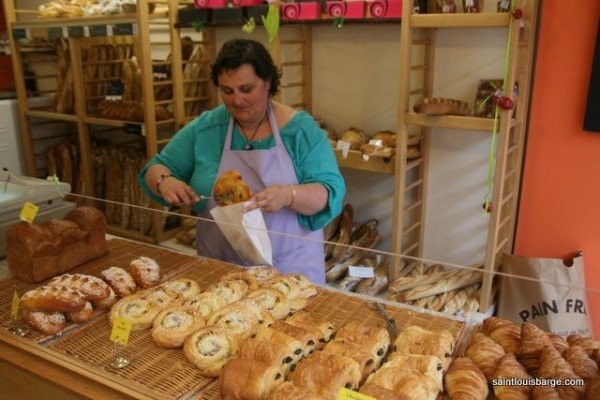