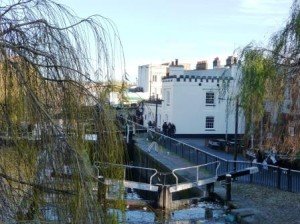 For us the winter time offers opportunities to explore other areas and catch up with family and friends, often in UK.  We are in windswept, storm bashed England right now staying with family in north London. So not only were we lucky enough to have a blue sky, sunny day – but also we were extremely fortunate in having an opportunity to join a guided walk around Old Camden Town. 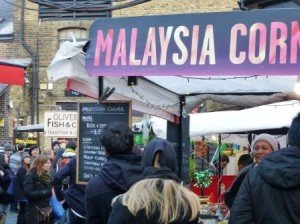 We’ve often visited the market before – it’s a favourite of ours for various reasons, starting with its wacky market!  Colourful, bustling, busy, eclectic with clothing from vintage (still got some of that in my wardrobe!) to designer-labels-in-the-making, it’s all in the Camden markets (there’s 6 or so of them in a small area).  On a previous visit having ‘done’ the market (or part of it!) and lunched at one of the many and varied venues – from good ol’ British Fish & Chips to exotic curries of various origins – we walked along the canal tow path. Passing the famous London Zoo in RegentsPark, we saw keepers taking reindeer for a walk – it seemed a bit bizarre, especially with the reindeer connections in the VezereValley!).  Our ambling took us to an area of London called ‘Little Venice’ – it’s delightful and a cup of tea from the floating café there was very welcome.

On this occasion however, our walkabout was in the company of a brilliant guide – Judith Clute. We’d picked up a London Walks Company leaflet quite by chance when staying overnight some distance from the city centre.  Even in the depths of December, there are numerous walks scheduled and they take place rain or shine.  We were lucky enough to have ‘shine’ – and not too cold either. 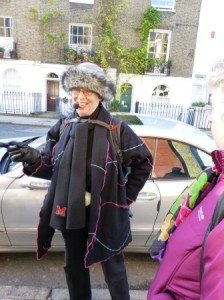 We linked up outside the Camden Town tube station and Judith started her walk, punctuated by numerous stops giving us all sorts of nuggets of information about Old Camden.  For example, we were standing right by the first Ladies public toilets in London which are there as a result of George Bernard Shaw’s intervention.  He was a radical 19th century playwright (the next time you see ‘My Fair Lady’ remember this!) who felt that the ladies of the area should have a ‘convenience’ at their disposal! Not to be left out, a facility for the gentlemen was added later!

Camden was a poor part of London originally populated by Irish labourers in the 19th century and from 1938 the All Irish Dance Hall  was where they ‘let their hair down’. Later this became the Electric Ballroom much used by the Rock & Rollers of the 1950’s. The area is still famous for the numerous bands that are associated with the area – British Indy Rock started here.  And, surprisingly, the long running (50 years) and much-loved tv series, Dr Who started here.  In the 1930’s there was a plan for a deep express line to Charing Cross (Deep Level Tunnel). Work started, but was abandoned just before the Second World War (the tunnels were used as air-raid shelters). Later these DLT tunnels were hired by the BBC hired as a setting for the famous tardis and dalek scenes.  Who would have thought that was going on under their feet some 30 metres down in 1963?

Judith is a ‘mine of information’ as we went round she told us about various characters (Bernard Shaw we’ve already mentioned, Charles Dickens, Dylan Thomas, Amy Winehouse, George Melly, the Clash and places too, such as Rowton House (originally a cheap lodging- house for 1103 men – currently a hostel but for about 500).

We’ll be writing this up more fully, so if you’re interested, let us know. 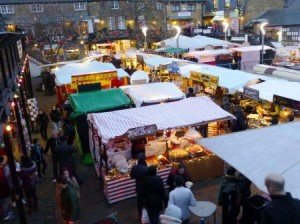 But let’s move on to the Camden Markets – this area with its locks and canal links was once a thriving depot and buildings now used by traders were warehouses for a variety of goods brought in by horse drawn barges.  Gilbeys (well known for their gin) was one of the largest firms there and they had extensive stables for the numerous horses used for towing the barges. There was even an animal hospital.  It seems extraordinary now, but this unique and special area was almost lost in the 1970’s when there were plans to fill in the canals and turn them into roads!  Fortunately, tycoon Richard Caring (very appropriate name!) stepped into the breach in the 1980’s.  When he and his son narrowly escaped death whilst scuba diving in Indonesia when a tsunami hit, he took stock of his life after.  He realised that market trading was an important part of his life and – long story – he purchased the stables and horse hospital thereby rescuing them from the dastardly developers.  It’s also thanks to him that the area is resplendent with huge bronze horse statues – imported from India as ballast! 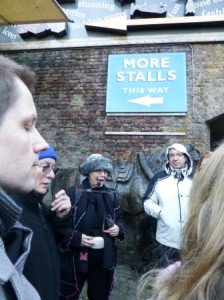 Today the market is thriving and long may it remain so –  if you get an opportunity, do take time not only to visit the markets, but the surrounding area too.  If you are lucky enough to be in the company of an expert guide like Judith Clute (who is also a local artist) you will really share an experience ‘under the skin’ of one of the most fascinating parts of London.