After all the recent anniversaries to do with the First World War, 2019 will no doubt see many people remembering that it was 80 years ago that the Second World War started. Many Britons found themselves on the ‘front line’ at home, facing up to bombing raids, living on increasingly meagre rations and, to use a wartime catchphrase, years of having to ‘Make Do & Mend’. Nearly all of us had family and friends who fought in one of the armed forces. For our parents and grandparents it was their lives – history becomes very real and personal.

With this focus in mind, it seemed a very appropriate time for us to explore the Ramsgate Tunnels. This is a unique labyrinth of tunnels which cost the equivalent of £4 million in today’s money. The project was funded by the UK Government which was originally reluctant, but thanks to the powers of persuasion of the Mayor of Ramsgate, Mr. A.B.C. Kempe, the funding was approved. The planning was meticulous – the main entrances, for example, had shallow 13-step flights with right angled bends to protect from bomb blast and allow 2500 people to enter in 5 minutes. Entrances were sited around the town so that they could be reached within 15 minutes after the sirens had sounded. They were dug by Kentish coal miners who worked round the clock, digging 8 – 10 yards a day and completed the task in 6 months. An amazing feat. 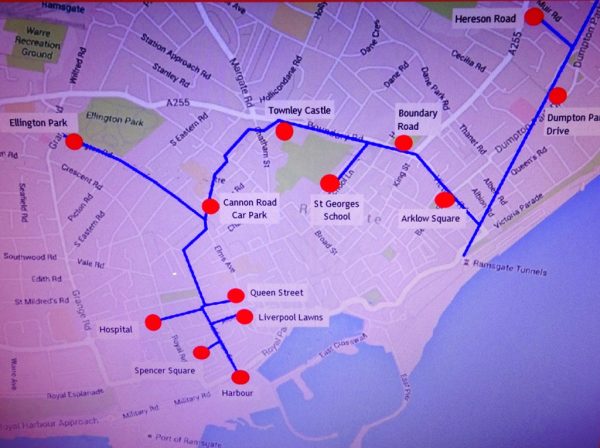 The reopening of the Tunnels was equally amazing. They had almost become forgotten and consigned to history, but an inspired group of locals carried out the extensive work necessary to open them go the public in 2017 and tell the story of life during the Blitz for the people of Ramsgate.

These tunnels provided – in the same the the London underground did – a safe haven of shelter for the residents of Ramsgate during the numerous bombing raids which rained down on their town during the Second World War. Not only that, so many families lost their homes – obliterated or made unsafe by the bombs – they needed a temporary refuge and Tunnel Town was formed. 345 bombed out families’ primary address was ‘c/o Ramsgate Tunnels’. You could liken it to a shanty town – temporary structures of flimsy timber construction and fabric walls – but in the safety of the newly created underworld. One man was so badly affected by the experience of the bombing, he remained underground for the entire duration of the war. Sadly when he emerged at the end of hostilities, he collapsed and died just outside the entrance to the tunnels – the nearest there was to a fatality associated with the tunnels. Miraculously, no-one died down there, despite the difficult conditions – although there were 3 who started their life there, babies don’t wait for a break in an air raid for Mum to get to the safety of a hospital! 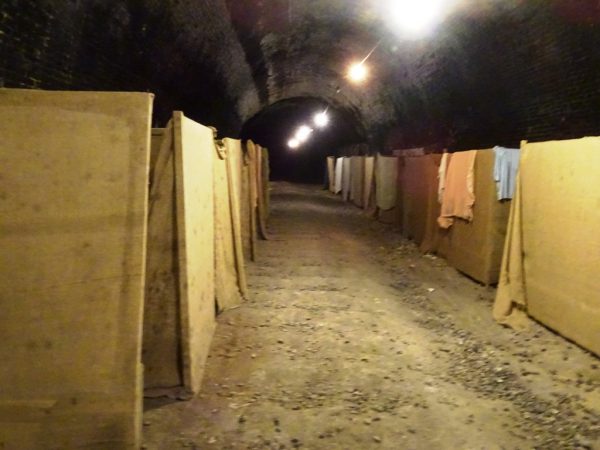 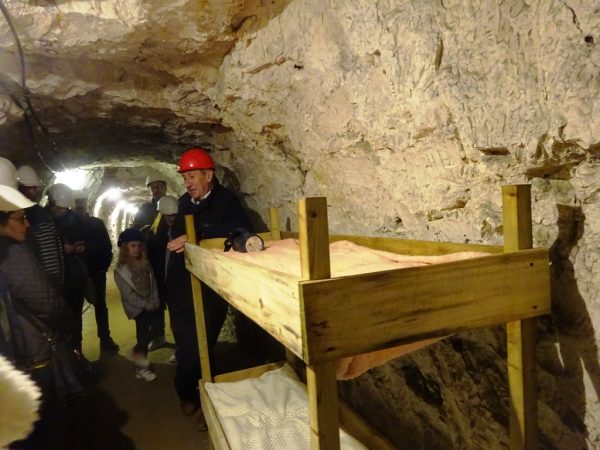 Volunteer guide, Tony, by one of the numerous bunks that lined the tunnel walls.

We were guided through the tunnels by Tony & Mark, both volunteer guides at Ramsgate Tunnels which are now open to the public. Both are deeply passionate and knowledgeable and really convey how life was there for the local people. How they had to obey the instructions of the ARP (Air Raid Precaution) wardens who were in charge of the tunnels – their word was final, no negotiation. Without an entry pass, chances of getting in were very slim! There had to be rules – one of which was no smoking (for obvious reasons!) – and even the illustrious Winston Churchill, Prime Minister of Great Britain at the time, had to obey when instructed to desist from smoking his trademark cigar by a warden! As Tony said, he wouldn’t have wanted to be the one to tell the great Winston that! (Apparently Mr Churchill in his fury, threw down his cigar which the enterprising ARP Warden scooped up. Seemingly he made a tidy profit selling slices of it in one of the local pubs!)

Steve, trying to get round the ARP Warden perhaps having forgotten his entry pass?

The entry Pass shown above, has the childhood address of Mark, our volunteer guide!

A few facts. The tunnels opened 1st June 1939 by HRH The Duke of Kent were designed to shelter up to 60,000 people, although usually it was between 25 – 30,000 who took refuge there. At times this number was exceeded, for example in 1940 during the Dunkirk Evacuation – what a contrast the 6 feet wide, 7 feet high tunnels must have been for the soldiers who had been exposed as they had been on the beaches on the French coast. The tunnels were constructed 50-75 feet below ground so they provided sufficient protection against the 500 and 1000 pound bomb the town was subjected to – Ramsgate is in the county of Kent which was known as ‘Bomb Alley’.

The Tunnels are well worth a visit if you plan a trip to England. The Normandy beaches are over the channel and if you plan a visit there, you could take the Calais-Dover ferry and visit for yourself – returning to France the same day if you wish. More information can be found at www.ramsgatetunnels.org

Next time we’ll hop across the Channel and tell you about another incredible feat associated with D-Day – the artificial port at Arromanches.