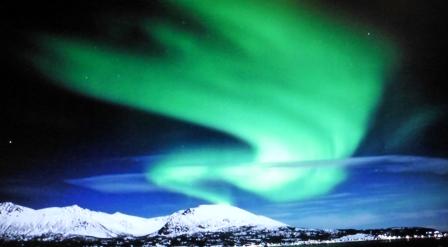 We have just returned from a winter holiday in Norway – our quest? The Aurora Borealis– Northern Lights – but for us they were to be frustratingly elusive despite this being an optimum time for viewing them (the Solar Maximus). The activity was there, but obscured by heavy cloud and/or minimised by light pollution.

Nevertheless it was a great trip up the Norwegian coast on one of the post/freight vessels that travel the route up to North Cape, the northern-most tip of Norway and over to Kirkenes, near the Russian border. And the weather was unseasonably mild – plus 10oC when we arrived in Bergen! Even further north in Kirkenes it was a mere -12 oC, cold to us perhaps, but mild as far as the locals were concerned. “When it gets to 20 oC, we head to the lake for a swim” we were told by a British ex-pat who has lived near North Cape for nearly 40 years. 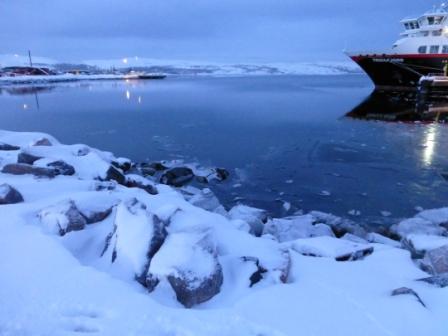 The icy waters off the Norwegian coast

Being winter, we also experienced the low light levels that the season brings – not the 24 hours of darkness as it is generally said, but in January 15 hours of darkness and 9 hours of twilight – but all the same it is pretty gloomy. Each year around the 24th of January a holiday is declared when the sun first makes its appearance over the horizon again – and having experienced the sombre days, we can understand why it is cause for celebration.

These conditions set us wondering – why, about 10,000 years ago, would our Cro-Magnon ancestors have left the comparative warmth and comfort of the Vezere Valley for the cold, inhospitable northern climes? The reason that people settled here in what is now South West France is largely due to the milder climatic conditions and also, significantly, because it was on the migration route of the reindeer. This, without doubt, was the most important animal in terms of their survival – there was not a part that was not used, but that’s another story. So why head further north away from the sunshine – and thus better light levels – and follow the retreating glaciers? Because that’s certainly what happened. How do we know? The DNA of present day reindeer matches that found in this area (the Vezere Valley). So again, the Cro-Magnons were following their dinner!

And amazingly, rock art appears about 6000 years ago – so much so that the largest collectiom of rock art in Norther Europe can be found in the Alta region of northern Norway and the area was listed as a World Heritage Site by UNESCO in 1985.  So our ancestors had the time available to execute the art – life can’t have been too bad up there! 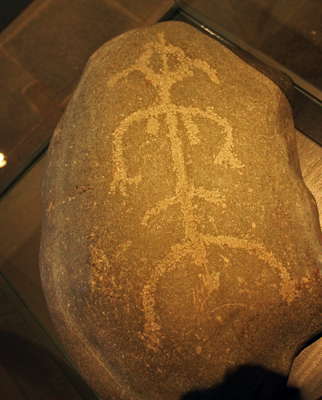