August is party time in the villages of Italy. Posters advertising festas or sagras sprout from trees and lampposts; leaflets pile up in bars and tourist information offices. A festa was originally a solemn religious festival and sagra derives from sacra meaning sacred, but both have morphed into excuses for high spirits and enjoyment. My friends call me a sagra junkie, and I admit I can’t stay away. Most serve good food cooked by the people of the village, but only one I’ve been to so far started with a blessing of motorcycles before the supper accompanied by folk musicians and dancers. 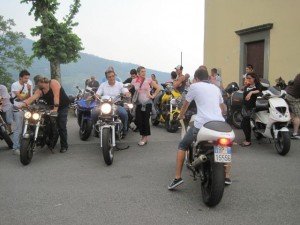 Tonight I can choose among twelve different ones in the Garfagnana alone, which is a tiny part of Tuscany north of Lucca. There’s the ‘Sagra della porchetta’ — a meal based around succulent herby roast pork and served in the sports ground of Villetta. 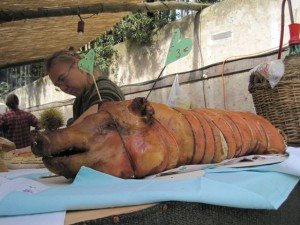 But the view will be more spectacular from Trassillico, a village balanced on a razor-edge ridge in the shadow of a fifteenth-century fort, which serves Garfagnana biroldo (our sensuously spiced blood sausage) with creamy polenta. 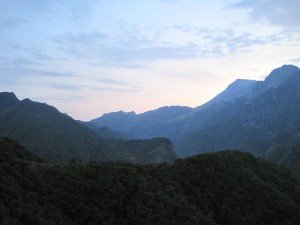 The ‘Sagra della trota’, a menu based on trout from clear mountain rivers sounds enticing too. If I’m feeling homesick for England, I could scoff some fish and chips at Barga. Or maybe I should choose one of the three mediaeval festivals, such as ‘I banditi dell’Ariosto all’ora di Cena’ (‘The bandits of Ariosto at dinner’), where the mountain village is romantically lit by flares, the inhabitants are dressed in mediaeval costumes and each course is served in a different courtyard of the village. As the sun sets and lights begin to twinkle in the valley far below, a band of rowdy brigands bursts in through an arch and demands payment, but is bribed with wine and good food to join the company of diners. This probably sounds embarrassing to Anglo-Saxons, but the villagers are as unselfconscious as if they were wearing jeans and horsing around with their friends in the bar. 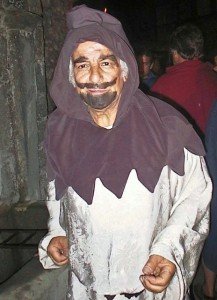 I love to include village festivals in my tours, partly because they’re fun, but also because they’re the opposite of a tourist attraction. These are parties the people of the village throw for themselves — the permanent inhabitants, the émigrés who return to their ancestral homes for the summer and the few foreigners who have bought houses in the village or are staying at a nearby agriturismo. One of my sagra calendars says, ‘Now is the time to rejoice with our people. Popular traditions are the essence of a community, the spirit that, throughout time, remains alive and is transmitted from one generation to the next’. Children are important. At parties they learn effortlessly about the best things from their past. 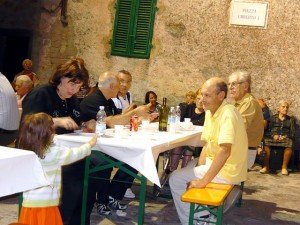 But Stefano Baccelli, the President of Lucca Province, comes closest to what I feel: ‘The occasion may be an art show, a theatre production, a local folklore event, the passion for artisan crafts or our traditional flavours. In the end, the motivation is of little importance: the thing that counts is the desire for a voyage, for discovery, the will to re-establish a profound dialogue with our history, our traditions, our landscape. If you share this with us, you cross “bridges” and enjoy the journey: welcome back on the human planet.’

Heather Jarman helps you discover the hidden culinary treasures of Lucca in northwest Tuscany. You can join me for a day, a week or as long as you like. Try to include a weekend so you can come to a sagra. Find out more at Sapori e Saperi Adventures and follow Heather’s own adventures on her blog.