Our visitors usually find out about us through our website or the occasional advertising we do and often because a visitor who has spent time with us, whether on one of our Caves & Castles fully guided Tours or self catering holiday, is so enthused, they tell their friends and family. In fact, a good percentage of the people who book with us do so because of a referral.

However, one recent booking came to us by a very strange route! She had been intrigued by an article in the Sunday Times’ Confessions of a Tourist column and after some quick googling, found our website and booked a holiday with us.

So what was the storyline? Well, the idea of the column is that people write in with their confessions about their holiday escapades. In this particular case, a lady, Jenny, had written in to saying she and a friend, Mo, headed to Europe each year, their interests being art and architecture, whilst their husbands went off on walking holidays.

Casting around for ideas, Mo says how about “CavesandCastles” and they decided to book. In the article, some details have been changed, for example Steve has become Michel and French and his English wife is said to cook “gastronomic meals” – judging by some of our visitor’s comments, perhaps there is an element of truth in that! In fact, we’ve been told, we don’t say enough about the meals we provide both here at Les Rosiers and local restaurants, but that’s another story.

The next event has fortunately not happened on one of our Tours. Mo friend became ill as a result of eating moules mariniéres the previous evening and had to miss the visit to Lascaux II the following day. Again there are clear connections with our website “the stunning replica of the world-famous painted caves” and Rouffignac the “Hundred Mammoths” cave. As we read, we are more convinced that it is one of our Tours that is being referred to. 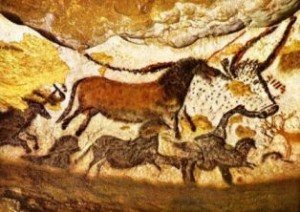 Then the story really moves on. Without the company of Mo, the confessor then tells how a fellow tour member, good looking Andrew, moves in. Previously they had exchanged a little conversation and he had glanced at her with “a conspiratorial light in his eyes” when sitting opposite herself and Mo at dinner. As they stood together waiting to go into Lascaux II and chatted “he made me feel bright, young and single” “This I knew was a dangerous feeling.”

They enjoyed seeing the “brilliantly reconstructed cave paintings” but she was somewhat distracted by her feelings and their whispered exchanges. “I knew I was ready for anything that might happen”.

They then share lunch and head to the next cave – Rouffignac. 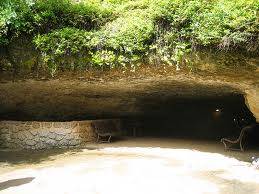 Entrance to Rouffignac – the scene of the confession

There is some amazingly factual information in the article – “the guide’s torch picked out the bumps in the rock walls showing the way the prehistoric artist had followed a curve to outline the haunch of an animal”. But then we go into fantasy again – “the flickering light and the sound of Michel’s translation became a distant background blur. I was conscious only of Andrew and myself. We were way behind the group, but still well ahead of the following one. As the tension between us rocketed off the scale, Andrew pulled me into a dark niche – and then and there we engaged in an overpowering passionate love-in”. As we said, this has moved into the realms of fantasy. But how fascinating! Who would imagine such things? Surely not someone who had been on a Caves & Castles Tour? We’ve searched our minds, but cannot come up with anyone who fits the bill and certainly no-one has suffered ill-effects from meals shared with us. How intriguing!

They say there is no such thing as bad advertising and seemingly this is true. The result of the article for us was a delightful couple booking a Custom Tour and we have every reason to think from their comments that nothing was lacking from it. And they’re going to recommend us to their friends and colleagues – and that can’t be bad!