My first memories of Sticky Toffee Pudding are from 2004, the summer our family walked 192 miles across England on the Coast-to-Coast walk. Every night over 2-1/2 weeks we stayed in a small hotel, inn or B&B, and every night after our long day of walking we enjoyed a hearty British meal.  Because we were walking 10 or more miles a day, we could enjoy dessert with every meal with no qualms.  At some point early in the walk, one of us ordered Sticky Toffee Pudding, and… wow! It’s since become our favorite British dessert, one worthy of dreams. 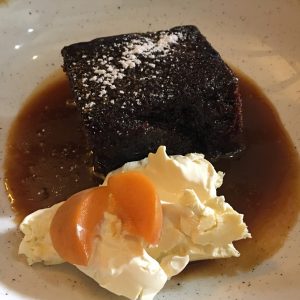 I was surprised to learn that Sticky Toffee Pudding is a relatively-recent arrival on British menus. One story is that it originated in Canada and was first prepared in England during World War II, when Canadian soldiers gave the recipe to a British hotel manager so she could make them a favorite dish from home.

The “Great British Puddings” cookbook says Sticky Toffee Pudding originated in the 1970’s, though exactly where is unclear… chefs in the Lake District, Lancashire, Aberdeen and the south of England all claim to have created this now-popular dish. So who really knows?

The British term for the dessert course is “pudding,” and you’ll often see that term on menus or pub blackboards. But don’t think of “pudding” as Americans do: a thick milk-based dessert that you eat with a spoon. English puddings can include a whole range of sweets including fruit pies, cheese cakes, and elaborate steam-cooked concoctions… the traditional British “puddings.” Some of these traditional puddings date back hundreds of years.

Each of the classic puddings has its own devotees but we think one pudding–Sticky Toffee Pudding– stands tall in the hierarchy of after-dinner treats. My husband Charley described Sticky Toffee Pudding as “a tastebud-exhilarating mix of dark, rich buttery date cake, thick and hot toffee sauce, all to be covered with clotted cream, an English invention that’s just a tad short of being creamy, whipped butter.”

Over the past 15 years, we’ve sampled Sticky Toffee Pudding at restaurants and pubs all over England. Our standards are high, and we’re sometimes disappointed. For us, the all-star Sticky Toffee Pudding is served at the special family-owned inn where our groups stay in the Cotswolds– the Lygon Arms in Chipping Campden. 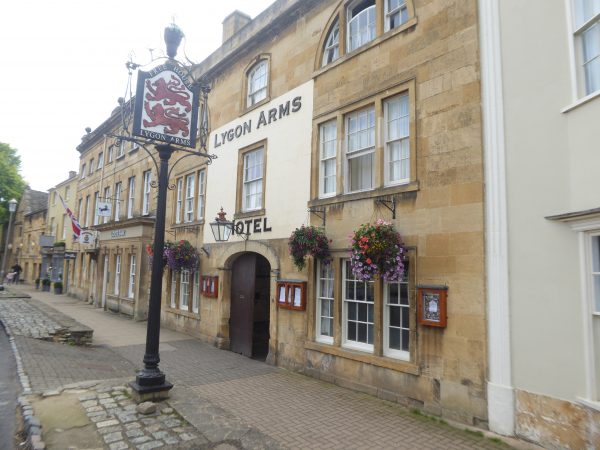 A wonderful inn, pub and restaurant; a welcoming and enthusiastic staff; a ideal location in the best village in the beautiful Cotswolds. And the best Sticky Toffee Pudding in the Cotswolds… maybe in all of England! 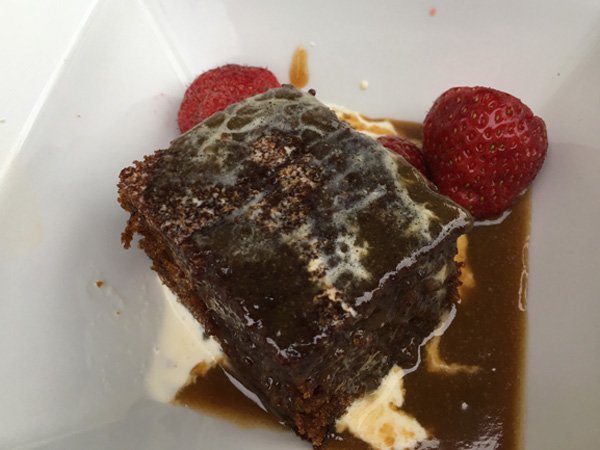 The Three Ways House in the nearby village of Mickleton is world-famous for its puddings. Since 1985 they’ve hosted The Pudding Club, an evening dedicated to celebrating traditional British puddings. They host Pudding Club evenings several nights a month, serving a small main course and seven different puddings. Charley and I attended a few years ago… what an experience! You can have as many servings of pudding as you can handle. (The man sitting next to me—a middle-aged postman at a bachelor’s party—ate 17 servings, far surpassing my four!) Afterwards the entire room votes on their favorite. No surprise— their Sticky Toffee and Date pudding usually beats out all the others. 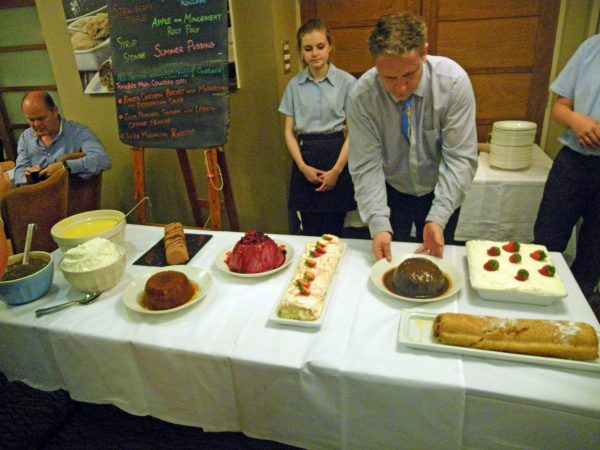 Seven puddings to try at a Pudding Club dinner

Our Cotswolds Experience groups enjoy a special dinner at the Three Ways House, though we have a starter, a proper main course, and a buffet of “just” three puddings. That’s probably enough for us. Some people try all three, and some go back for seconds. My favorite there is the Syrup Sponge, another of the steamed puddings. 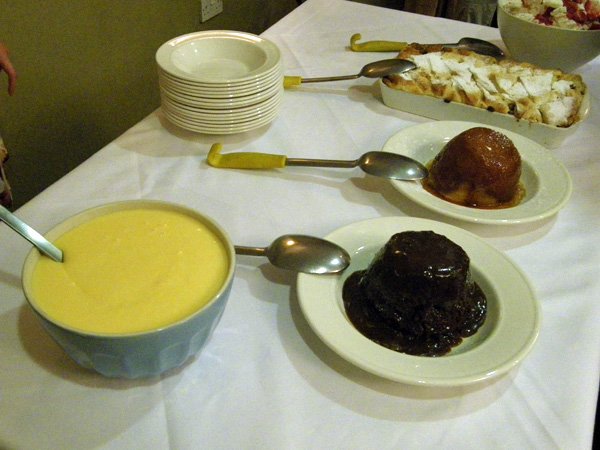 Our “pudding buffet” at the Three Ways House.

We like the Sticky Toffee and Date pudding at the Three Ways House, but Charley insists it’s in second place to the Sticky Toffee Pudding at the Lygon Arms, and I have to agree. The Lygon Arms normally serves theirs with clotted cream. The Three Ways House recommends “lashings of custard”… the big bowl on the left in the photo above. I prefer it with vanilla ice cream, melting a bit as it sits next to the warm soft-cake pudding with the wonderful toffee sauce. (The sauce is made of butter, double cream, and dark brown sugar.)

This past summer we hosted a Return to the Cotswolds group, mostly travelers who had been with us in the Cotswolds before and wanted to come back to enjoy new experiences. There were many Sticky Toffee Pudding (STP) fans in that group… so much so that we planned a very special experience during the week, with the help of the Lygon Arms owner Sandra and their long-time server-extraordinaire Jo.

Sandra and Jo welcomed our group for an evening at a beautifully-restored 16th century house in the nearby village of Lower Quinton. In addition to a delicious barbecue meal, Sandra arranged for Jane Rapp—who prepares many of the cakes and puddings served at the Lygon Arms—to give us a cooking demonstration of Sticky Toffee Pudding, the version we’ve all enjoyed so much. 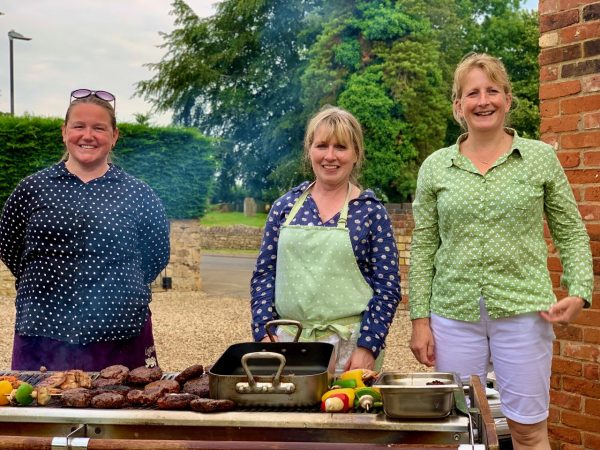 Our hosts at the barbecue – Jo, Sandra and Jane (photo by Mindy Smith)

There was one very secret ingredient that surprised us all… the dates were soaked in coffee before being they were pureed and added to the batter. 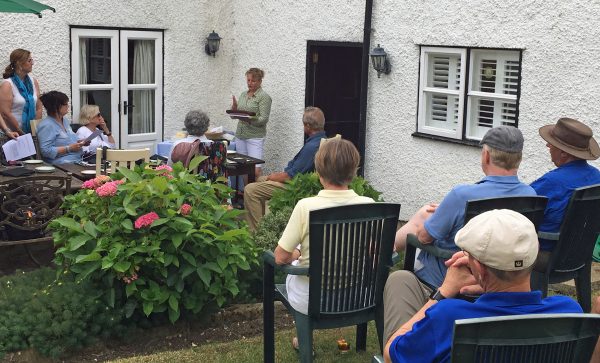 Our Return to the Cotswolds group at Jane’s STP demonstration

At the end of our meal, we all savored the special Sticky Toffee Pudding Jane had prepared. (She shared with us that she had studied baking with Pru Leith, who lives in the Cotswolds and now judges The Great British Baking Show.) 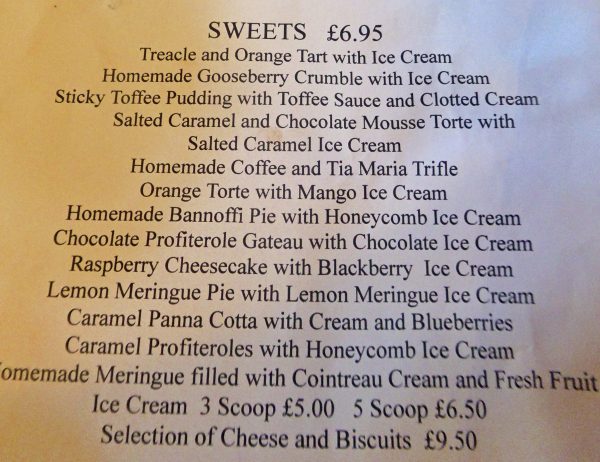 Some thoughts from Charley about Sticky Toffee Pudding: 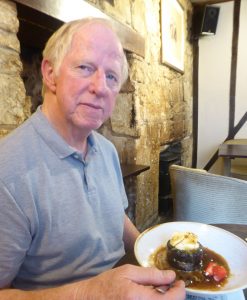 “The best way to enjoy STP is to banish any thought of counting calories from your mind and dig right in– and use a really big spoon. After the first bite, any remaining caution is thrown to the wind and you congratulate yourself for having discovered what might be the world’s best dessert.

“As I think about STP, I can practically smell the warm and rich caramel notes swirling off the dish. Perhaps that’s the best way to start to enjoy STP. Lean over the bowl and inhale the seductive aroma and watch the cream begin to melt and blend with the warm syrup. I love this pudding because it checks all the boxes – sight, smell, taste.

“Okay, now I’m really ready for a big bowl of STP, preferably from the Lygon Arms.”

You can enjoy the Lygon Arms, the Three Ways House, Sticky Toffee Pudding and much more of the beautiful Cotswolds on our Cotswolds Experience or Cotswold Gardens Experience weeks this July. We’d love to have you join us!

We’ll also be back in the Cotswolds in 2021, and we hope Jane will once again join our Return to the Cotswolds group to share the secrets of her Sticky Toffee Pudding recipe.

Learn more about our Experiences in the Cotswolds in these other blog posts:

Garden Experiences in Cornwall and the Cotswolds

A Cotswolds Experience: The Cotswold Lavender farm near Snowshill

A Cotswolds Experience: A Walk Along the Cotswold Way