On 28 February I was in Oristano in Sardinia. It was martedì grasso, Fat Tuesday, the last day of Carnival before Lent. Oristano has celebrated this day for a long time, 552 years to be precise, as the festival Sa Sartiglia. You can imagine that in over more than half a millennium it has accumulated many meanings and observances. 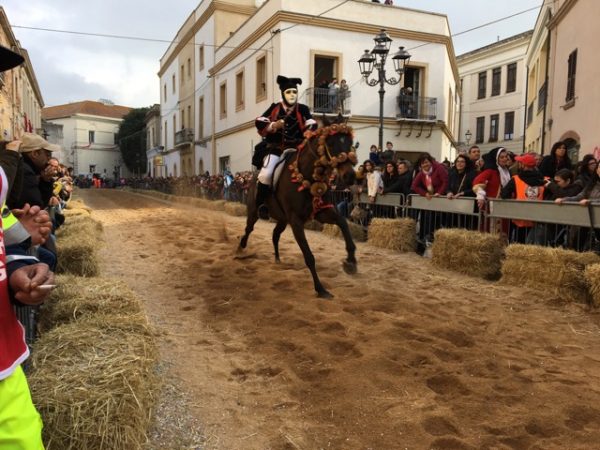 Cavaliere galloping toward his star

At its most basic and obvious it’s a giostra, a joust like the one at Arezzo with a feat to perform at the end of a charge on horseback. At Sa Sartiglia the horseman (with one or two exceptions they are all men) attempts to insert his lance in a small hole in a star dangling by a thread while galloping at full speed.

At a more fundamental level is the idea of trasvestire. Although our noun ‘transvestite’ derives ultimately from the same Latin root as this Italian verb, the similarity is misleading. In Italian the word means simply ‘to disguise’ or ‘to dress up as’ anyone or anything. For Sa Sartiglia, farmers and craftsmen dress up as knights and joust with fate. In the past it was their day of glory in which to display their horsemanship and affirm their equality with the nobility. Wearing their eerie, expressionless white masks, they could be anyone. 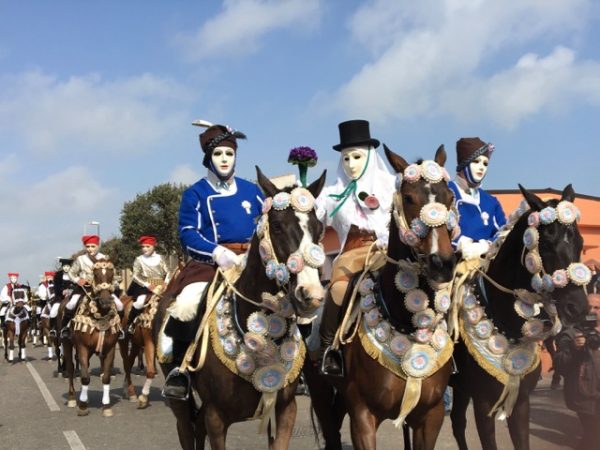 Despite the merriment, the masks seem sad.

Today two charitable organisations, descendants of the mediaeval gremi or guilds are entrusted with perpetuating the tradition. The contadini (farmers) guarantee the funding and the falegnami (carpenters) do the organising. Is this division of labour significant, I wonder. The word ‘gremio’ turned up some interesting meanings. It’s the archaic version of the present day grembo meaning ‘lap’ or ‘womb’ and by extension any community with the aim of giving spiritual refuge. Now you can figure out why the word for ‘apron’ is grembiule, not that my lap feels much spiritual uplift when I’m  doing the washing up in one!

Each gremo has its own day for the tournament. On Fat Tuesday it’s the carpenters’ turn. After some preliminary waving of banners and sounding of trumpets and drums, the ceremony of dressing of the Componidori (the leader of the event) begins at noon. The outdoor courtyard is packed with spectators. I squeeze in and some kind veterans give me a place near the front because it’s my first time there. 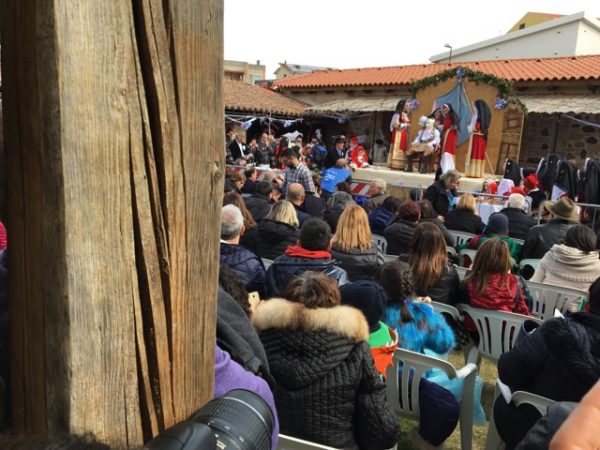 Playing to a packed house

Don’t imagine the buttoning of a shirt, the zipping of trousers, the throwing on of a cape and the balancing of a hat on a head. The dressing takes an hour an a half during which expert seamstresses stitch every garment in place, especially the mask. I overheard one spectator wondering whether he’d remembered to fare la pipì before taking his place on the stage. 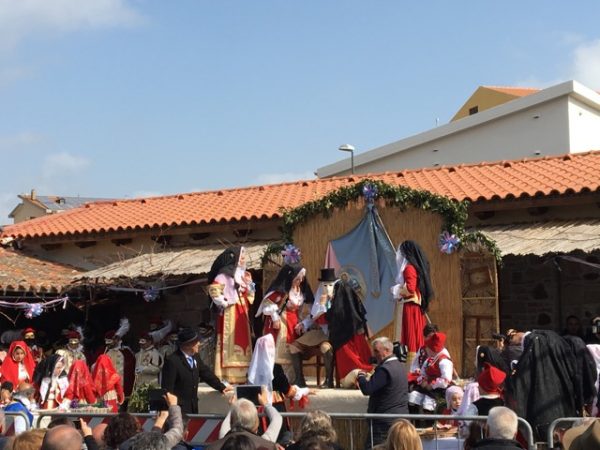 Women in traditional dress patiently stitch the mask in place.

It was thoroughly boring at the same time as being absolutely fascinating. Maybe for him, a craftsman, to be transformed into a noble in the space of 90 minutes was a dream come true, a great honour to participate in a ritual not only of his own city but practised by kings from Charlemagne onwards, who invited the public to their bedchambers for their rising and dressing.

From time to time the tedium was broken by a roll of snare drums or the blast of trumpets, one of which finally signalled the Componidori rising from his chair, mounting a horse, and, before exiting to lead the cavalcade, making the sign of a cross with a baton of sweet violets, symbol of spring and new growth. 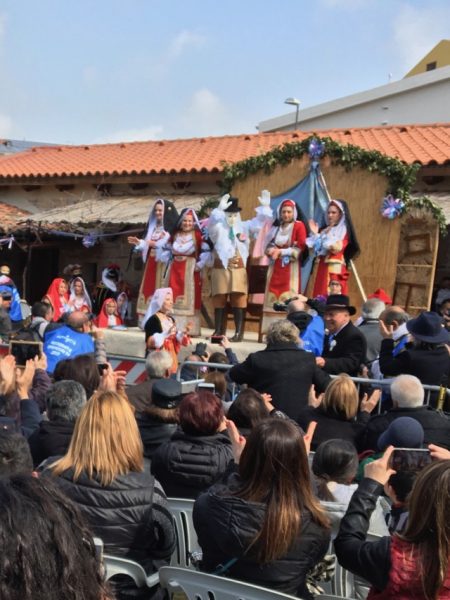 The fully dressed Componidori finds his feet and salutes the cheering crowd. 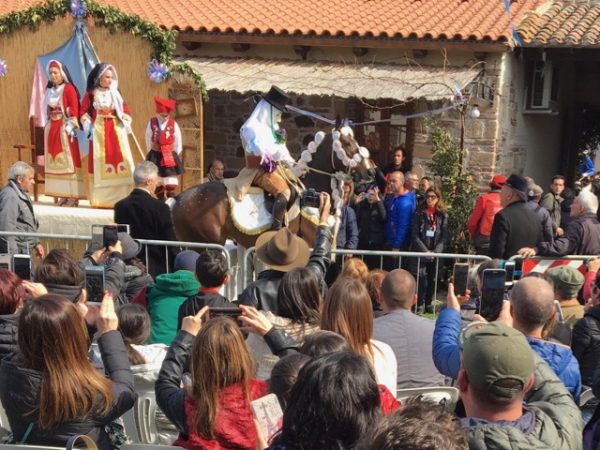 He mounts his bedecked horse and the seamstresses admire their handiwork.

The rest was more exciting but less intriguing: the procession, the pounding hooves, the cheers when a lance pierced the star. 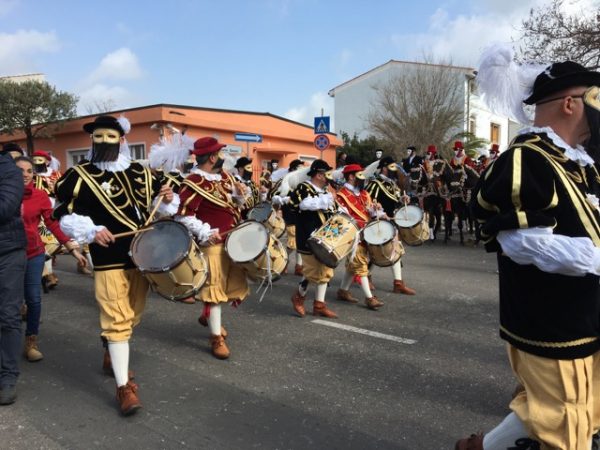 The drummers lead the procession to the start of the joust. 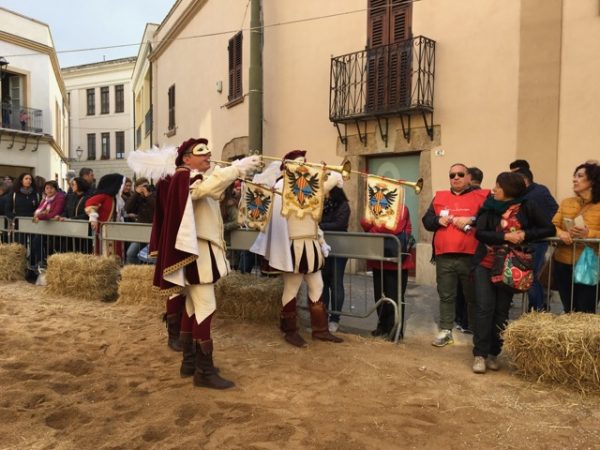 The trumpeters announce the imminent arrival of a cavaliere. 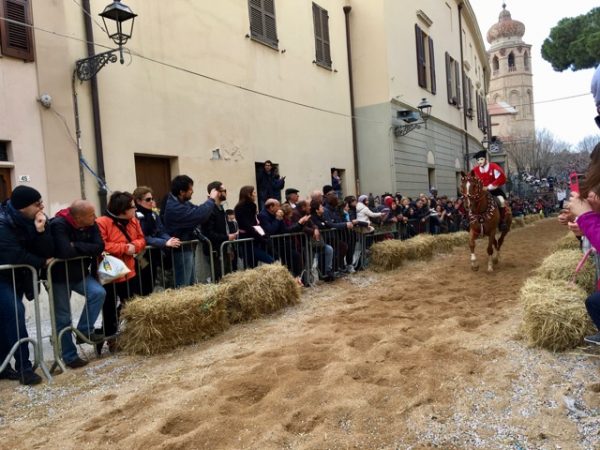 Once you get your eyes and ears in, you realise Sa Sartiglia had its roots in pagan solstice festivals heralding fresh spring growth and appealing for a bountiful harvest. For those lucky horsemen who manage to insert their lances in the hole in the star, the earth will bear abundant fruit. Some of it was available at the food stalls lining the streets of Oristano. 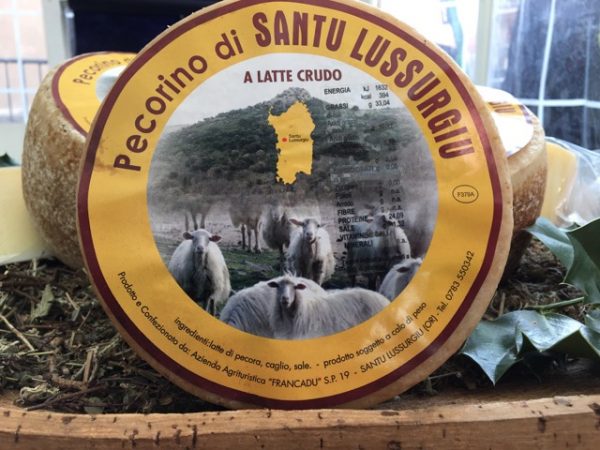 I’d like to thank Antonio Arca, my Sardinian friend who suggested I attend Sa Sartiglia. We hope to offer more tours to Sardinia in future. Right now, there’s still one place left on the Celebrating Sardinia tour in April 2017, and new dates for 2018 are already on the website: http://www.sapori-e-saperi.com/small_group_tours/celebrating-sardinia/. If you’re lucky enough to live near London, you can get some of the wonderful food from Antonio’s market stalls: http://www.capocaccia.co.uk/.