The Dordogne is best known for its rivers, forests, castles, and prehistoric caves. But it’s also renowned for its outstanding regional cuisine. If you’re planning a trip to the Dordogne in southwest France, you’re in for a special culinary experience… one featuring a duck, a goose, a walnut and probably a strawberry too. 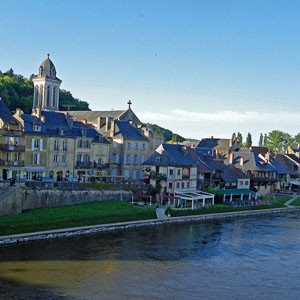 Montignac, on the Vézère 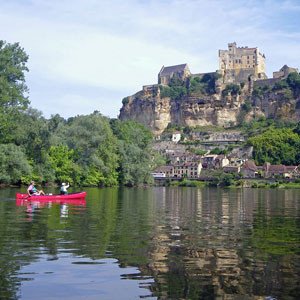 Chateau de Beynac, on the Dordogne

The Dordogne (often called the Périgord) is one of the top gastronomic regions of France with an unusually distinctive cuisine drawn from its agricultural heritage and products from its forests. We’ll return to the Dordogne this summer with our Périgord Experience groups, and our meals are always a highlight of our week.

The Dordogne is one of France’s 96 départements, formed after the end of the French Revolution, taking its name from the 300-mile Dordogne River. The area generally corresponds with the former province of Périgord; the names “Dordogne” and “Périgord” are used interchangeably, particularly when referring to the distinctive Périgordian cuisine.

Duck is on almost every menu in this region. A duck breast is as common in the Dordogne as a chicken breast is in the USA. It’s absolutely delicious! And in this area most cooking is done with duck or goose fat… not butter or olive oil, as you’ll find in other regions of France.

Here are some of the dishes and ingredients you’ll find on menus in the Dordogne, as well as in markets and specialty food shops:

Confit de canard – a delicacy that involves preserving duck legs/thighs in fat and salt until the meat is fried. Some of the fat is then used to seal it into its tin or jar. The skin is crispy and the meat is deliciously tender and flaky.

Magret de canard – duck breast from the Mulard breed of duck, served in a variety of ways, grilled or with a sauce. The French usually order their magret à point, generally equivalent to the American “medium rare.” 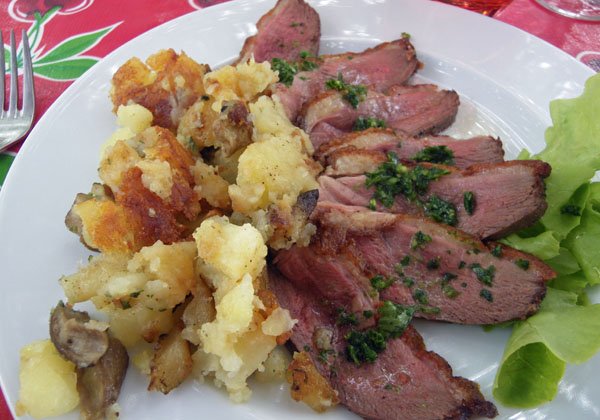 Salade Périgourdine – another salad variation frequently found on menus. This salad usually includes gésiers and may also have sliced duck breast, often smoked, and some foie gras. Vinaigrettes used in salads in the Dordogne are made with walnut oil. Salads also usually include walnuts.

Foie gras – This is the premiere delicacy of the region, sold in specialty shops and at farms and served on most menus, often as an entrée or first course. Ducks and geese are both farmed in this region for foie gras, their livers enlarged through a force-feeding practice called the gavage. (We’ve watched the process with both ducks and geese… it was interesting and not at all what we expected.) The fattened liver from these birds can be bought entier (whole) or incorporated into a pâté, perhaps with morceaux (bits). Fig or onion chutney and toasted brioche often complement foie gras. 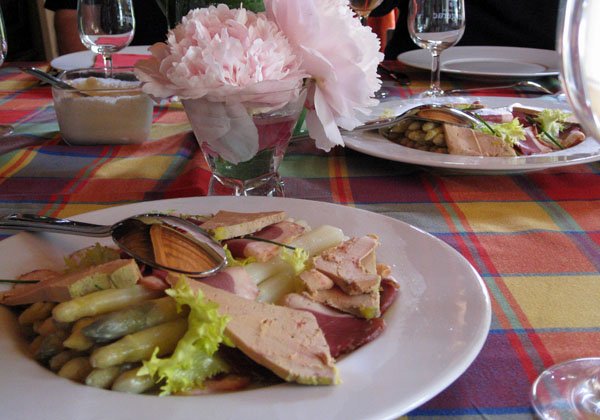 Pommes de terre à la sarladaise or just pommes sarladaise – In the region around Sarlat, these sliced potatoes (sometimes with mushrooms) are fried in duck fat and served as a side dish with almost every main course.

Fraises (strawberries) are grown extensively in the Dordogne (25% of the total production in France), and you’ll find them in markets and on menus in the summer, usually as an option for dessert. There are several different varieties, including the gariguette, mara des bois and charlotte, and they’re juicy, sweet and delicious. We also see the tiny fraises des bois, wild strawberries found in the forest. 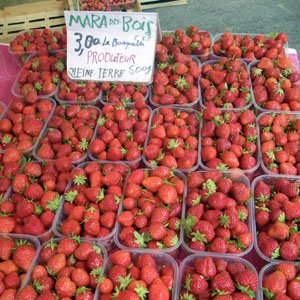 Strawberries at the market 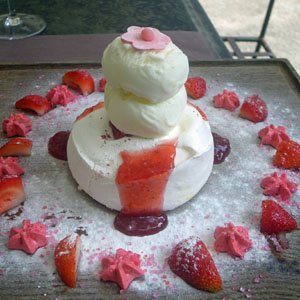 And a beautiful strawberry dessert…

Cabécou – a very popular goat cheese, made in small medallions, from nearby Rocamadour in the Lot. It’s often served on a bed of salad greens and drizzled with walnut oil.

Périgord truffles – also known as “black diamonds” for their rarity and high price. The fungi are notoriously hard to find. There are special truffle markets held in the Dordogne from the end of November until around mid-March. Any dish that is described with sauce Périgueux or à la périgourdine includes truffles. 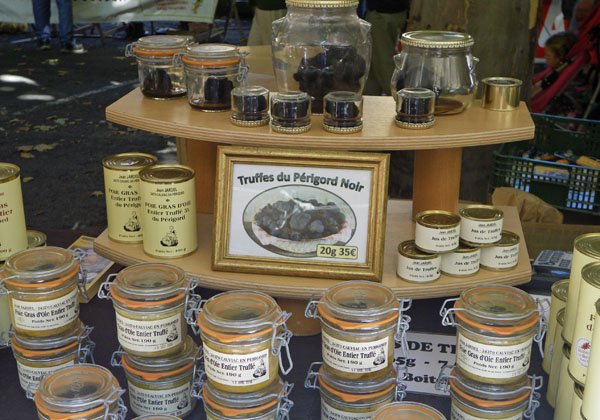 Truffles and foie gras d’oie for sale at the market

Cèpes – wild mushrooms, abundant in the forests of the Dordogne. These might be included in an omelette as a first course or as the main course at lunch. Other types of edible mushrooms are often found in dishes in the Dordogne, such as girolles and chanterelles.

Noix (walnuts) – the variety of walnuts grown in the Périgord are small but are full of flavor… and they’re everywhere! Walnuts are pressed for their oil and made into wine and liquors. They’re sold in their shells, out of their shells, coated in praline, turned into candy, cake or cookies. 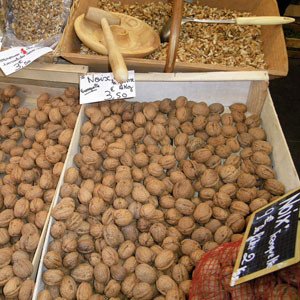 For sale at the market 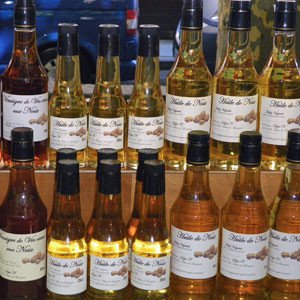 To learn more about the cuisine of the Périgord, we recommend the book Walnut Wine and Truffle Groves: Culinary Adventures in the Dordogne by Kimberley Lovato and Laura Schmalhorst, with beautiful photos by Lou Lesko.

Or better yet, join us for The Périgord Experience… we’re booking now for 2015!