We’ve only been here a fe 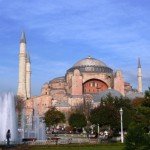 w hours, but have already been astounded by the history and sights within a few feet of our hotel in the old Sultanahmet district. We walk out the door, and there’s an ancient bazaar, full of tempting treasures, with the majestic Blue Mosque towering behind. A few steps further and there’s the Haghia Sophia (left) , the former center of Orthodox Christianity dating from 537 A.D.
We’re welcomed to the Hotel Seraglio with Turkish coffee and Turkish delight – both delicious. We’re both surprised by what Turkish delight actually is – we expected something overly sweet, more candy-like. But this is rather like a chewy marshmallow, not sugary, rolled in shredded coconut. Yum! We’re looking forward to trying more flavors.

Through the years, we’ve learned that Rick Steve’s travel books are just right for a first-time visit to a city. Kirk is leading us on the historic core walk from Steve’s Istanbul tourbook.
We gawk at the mosques, then go under- ground…. and into a forest of columns, reminding 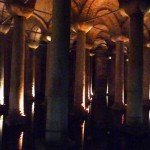 us of the Cathedral in Cordoba, Spain. Is this another center of worship? No, it’s an underground cistern, built by the Emperor Justinian at the same time as Haghia Sophia to provide water for the city.

It’s an astounding engineering feat, with its 336 columns supporting brick vaults high above. There are just a few inches of water in the cistern now, but it used to be 6 feet deep.Back above ground, we enter the Haghia Sophia, ascending a stone ramp to the upper gal 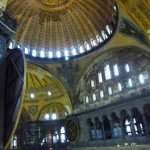 lery. Emperor Justinian demanded the biggest dome in the world way back in the 6th century, and that’s what he got.A beautiful pattern of lights,  suspended from the dome far above., adds to the beauty of the space.
They were added in the 1800’s by Ottoman rulers – candlelight at that time. Must have been magical! It is as bright as daylight when you stand beneath the lights on the ground floor.
Covered with plaster or whitewash during the Ottoman regime, exquisite Byzant 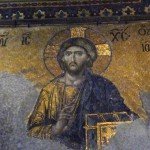 ine mosaics have been carefully exposed now that the space is a museum rather than a mosque.

We’ve seen photo after photo of the glittering Deesis mosaic, Christ responding to his mother Mary and John the Baptist, but the gaze of those eyes, in person, is soulfully shiver- inducing.
To make such a realistic face with tiny pieces of stone – amazing!
As we walk from Haghia Sophia towards the Blue Mosque, the  call to prayer trembles in the air above…. wafting from first one mosque, then another, then another.
We are charmed with this city, an exotic taste of the far East on the edge of Europe.

You can enjoy more of our journey with a simple click or two:

Night and Day in Byzantium

Lunch on Another Continent 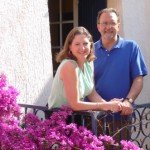 ’re interested in the stories that make the places we visit come alive.
We’ve visited Europe more times than we can count, learned some entertaining stories there, and met some warm and helpful people who also enjoy the wonders of music and life in Europe.
Between our music-related travels, we split our time between our homes near Washington DC and the south of France. We look forward to sharing these stories and friends and experiences with our Music and Markets guests.
While both of us have experience in organizing travel and music groups Kirk’s background is in project management and competitive writing, and Anne is an accomplished pianist with over thirty years of teaching experience, and a travel and food writer specializing in France and Italy.