All our European Experiences trips are based in small villages in the midst of beautiful countryside. For several weeks every year or two, sometimes for a month or more, Charley and I return to each of these special places and make our home there. We welcome our groups to relax and learn with us, to immerse themselves in the unique culture, and to savor a village experience.

There’s something about life in a French or Italian or English village that’s very different from life at home for us and for most of our group members, whether they come to Europe from the USA, Australia or Canada. An important part of all our Experience weeks is the ability to experience a village—the same village—for a full week. That village experience is inspiring, thought-provoking, and sometimes even life-changing. 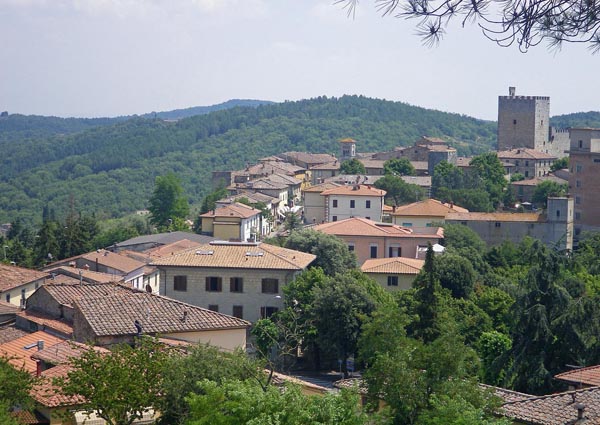 In each of these villages, we’re surrounded by history—a long history—going back hundreds, even thousands of years, living in ancient buildings that somehow manage to provide the comforts we expect today. We delight in the ability to walk to a small grocery store, a café, the post office, a bakery or gelato shop. We share a sense of community with neighbors, as we encounter the same people on a daily basis, exchange greetings, and sometimes even make a friend. And we soak in the views of the countryside beyond the village… the old farm buildings, perhaps a castle or another village on a nearby hilltop, and the fields of crops, vines, fruit trees, olive trees, or grazing animals. We ease into the rhythm of a simpler life.

Our Special Village in Chianti

2016 will be the fourth season we’ll be in the Chianti region of Tuscany with our European Experiences groups. It’s been more than 10 years since Charley and I first visited Castellina with our daughter Kelly during our 14-month sabbatical in Europe. We were staying in another part of Tuscany for a month and drove up to Chianti for a day of exploring. Castellina was our first stop along the Via Chiantigiana, the famous wine road between Siena and Florence. I still remember walking down the pretty pedestrian street, stopping to sample (and buy) Chianti wine at a wine shop, lingering over lunch at a small restaurant, and marveling at those drop-dead views from the back of the village. We returned to Castellina a few more times during that month. Although we enjoyed every place we visited in Tuscany during that long month (how could you not?), we found ourselves most drawn to Chianti. 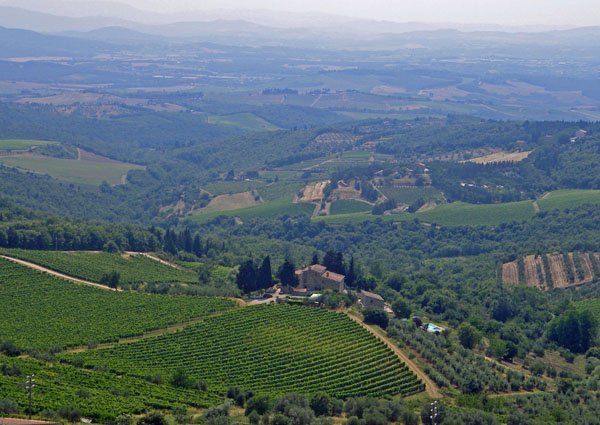 View of the Chianti countryside from the Castellina fortress tower

After two seasons based at a country hotel between Greve and Panzano, we decided The Chianti Experience needed to be right in a village. We visited several village hotels around the area and found the perfect place in Castellina-in-Chianti. We were there with our groups in 2014 and will be back again this year.

With a population of about 2800 people, located on a hilltop along the Via Chiantigiana, Castellina is one of the most important and interesting villages in the Chianti region. It’s a center for Chianti Classico wine and also for tourism… and offers spectacular views of a countryside covered with vines, olive trees, and forests.

Castellina’s history goes back thousands of years, to Etruscan times in the 7th century BC. A major route passed this way in those days too, linking major trading cities. Many important Etruscan finds have been made in this area. Just a few minutes’ walk from the village center of Castellina stands a little hill now called Montecalvario, topped with two cypress trees. The hill includes an Etruscan tomb with four burial vaults, dating back to the 6th century BC. 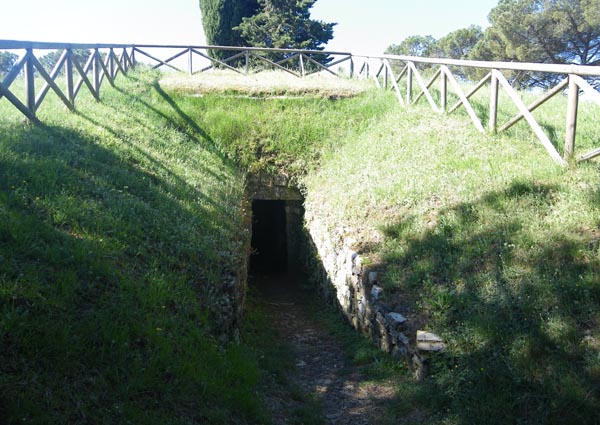 Later the Romans were in the area, and then in the 12th century Castellina came under the control of Florence. Castellina developed as a strategic outpost because of its location between Florence (25 miles north) and Siena (15 miles south). These two cities battled for hundreds of years, and a fortress and massive defensive walls were built to protect Castellina.

Today Castellina is a much more peaceful place, especially in the early morning when I like to wander the streets. 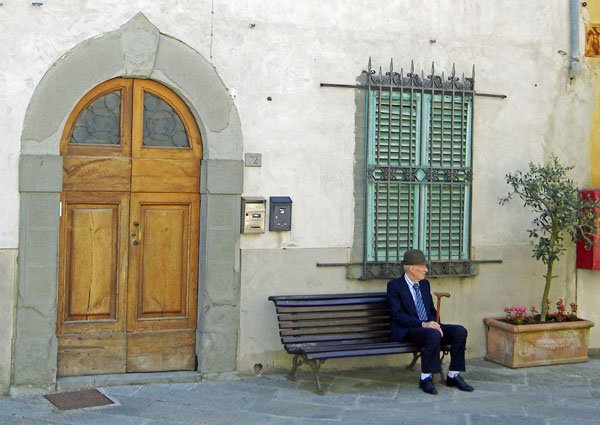 The main street, Via Ferruccio, is pedestrian and is lined with beautiful stone buildings, many dating to the 14th and 15th century. Today these ancient buildings house a variety of shops, wine cellars, restaurants, galleries, and private residences. Several of the restaurants have outdoor seating along the street in the warmer weather. There’s a busy outdoor market—mostly food—on Saturday mornings.

Castellina is a very attractive and clean village. Outside the ancient walls that once held back enemies, there’s now an broad walking path. Many homes and business are decorated with flowers—often container gardens, and there are unexpected and interesting sculptures around the village. 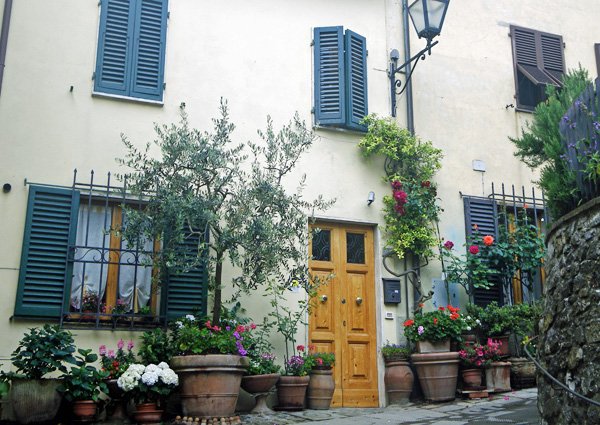 Our group’s hotel, the impressive Palazzo Squarcialupi, occupies a former 15th century palace that once belonged to a noble family. Facing Via Ferruccio on one side, it overlooks the countryside from the back with a swimming pool set among the vines. This small family-owned hotel has preserved its gracious Renaissance style, but also offers a comfortable and friendly environment for our groups along with modern conveniences. 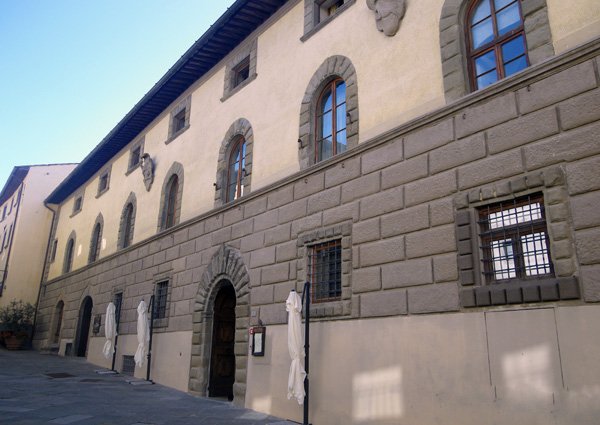 There’s much to see and do in Castellina. I especially like the colorful Pep Bizzarrie ceramics shop on one end of the village. And I enjoy visiting the little food and wine shops to stock up on local specialties to carry home. There are several good restaurants as well as wine bars. (In addition to the hotel’s restaurant, Taverna Squarcialupi, we like Il Re Gallo, a homey place that’s very popular with locals.) 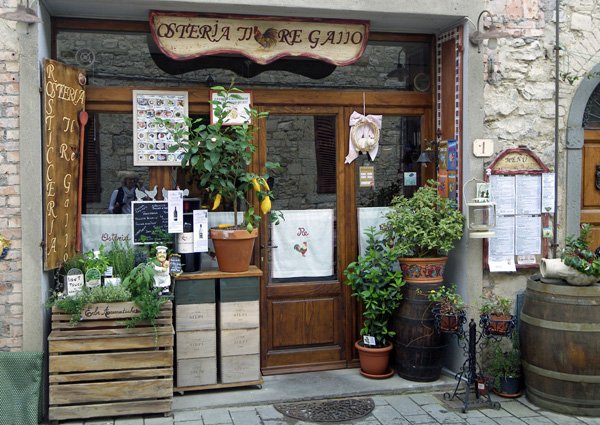 Charley and I are also good customers (too good!) of the famous Antica Delizia gelato, considered by many to be the best in Tuscany. The main shop is located across the main road, at the other end of the village, but there’s a small branch right next to our hotel. This is an important daily stop for many (most?) in our groups. 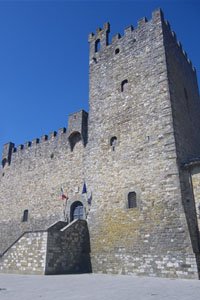 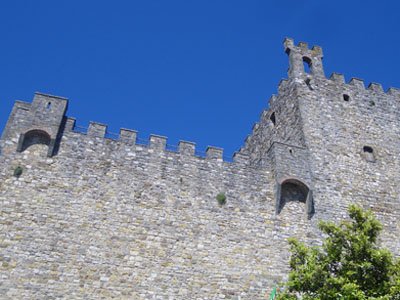 The ancient castle/fortress (pictured above) sits on Piazza del Comune, between Via Ferruccio and the main SR222 road, and dates back to the middle ages. Today the fortress includes the town hall and the Archaeological Museum of Chianti. You can climb to the top of the 14th century tower for spectacular views of the village and the surrounding countryside.

The Via della Volte, an underground tunnel that extends beneath the old walls, is one of Castellina’s most unique features. Once an open passage used for defense, it’s since been closed and private homes built above. Visitors can now walk along the passage and there are a few shops and restaurants. When we were there in 2014, one night the village hosted a big wine dinner in the tunnel. (The Via della Volte features in Charley’s book, A Villa in Tuscany.) 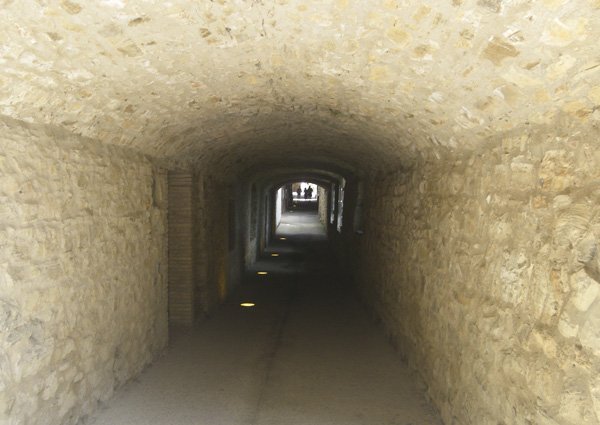 The church of San Salvatore is another important place in Castellina. The church was originally built in the 16th century and rebuilt in 1945 after it was damaged in World War II. You might be especially surprised to see the relics of St. Fausto in a glass case in the church. I won’t post a photo, but believe me, he is there! 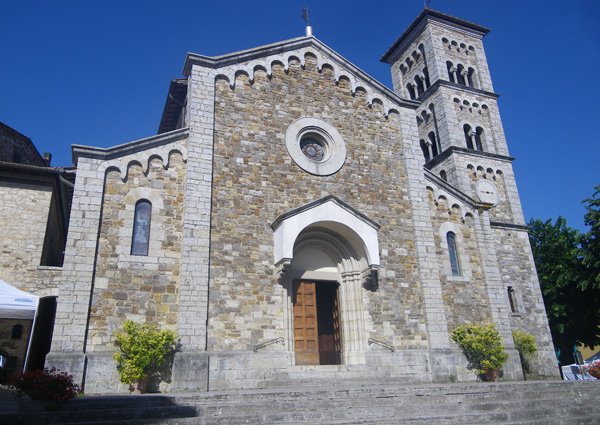 Italy is a favorite destination for travelers from around the world, and Tuscany is a magical place people dream of experiencing. Castellina-in-Chianti is the quintessential Tuscan village, encompassing the history, environment, culture, wine and food that we all find so appealing. Charley and I are counting down the days until our arrival on May 23, anticipating our extended stay in Castellina, and to introducing our groups to this very special place.

Enjoy Castellina-in-Chianti with us this year! We still have some openings in our 2016 Chianti Experience weeks, May 28 – June 4 and June 4 -11. See our website for more information. We’d love to have you join us.