Well, perhaps the situation isn’t quite that bad, but tickets for Font de Gaume are certainly becoming increasing reduced in number each year.  Grotte de Font de Gaume is one of the Vezere Valley’s gems.  It is a polychrome masterpiece dating back 15,000 years.  The image known as the ‘Kissing Reindeer’ is possibly the best known painting from here – the artists of Font-de-Gaume were able to show very real emotions in their painting – the tenderness of one reindeer licking another, for example. 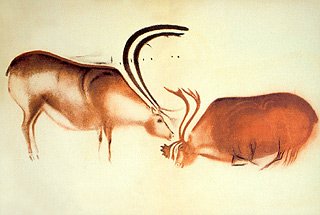 Font de Gaume was discovered on the 12th September 1901 by Denis Peyrony, a teacher from Les Eyzies. Dazzled by his discovery, Peyrony wrote to Abbé Breuil (who was known as ‘the Pope of Prehistory’) “the paintings are utterly beautiful……….,”

At this time rock art was not yet really accepted, with some archaeologists doubting their authenticity and antiquity, but there could be no doubt of the great antiquity of Font-de-Gaume because calcite had covered some of the pictures; this could only have happened over a very long period.

The quality of the two-coloured or multi-coloured paintings is exceptional, with the animals being partly or totally first engraved on the wall. Equally the natural contours of the walls are used with great skill to represent certain parts of their bodies. The artists have total mastery of the spatial organisation of the cave, using the natural contours to show the musculature of the animals.

One of the frieze of 5 bison at Font de Gaume
(photo courtesy of http://www.culture.gouv.fr/culture/conservation/fr/grottes/Pageshtm/11714.html

As you possibly know, the original Lascaux cave had to be closed because the paintings there were deteriorating due to over-visiting. The problem is the carbon dioxide and moisture in people’s breath – it causes a mould to grow on the surface of the cave walls, damaging and obliterating the paintings. It is a tremendous problem – not easily remedied, if it is possible at all.  This is why today we visit Lascaux II, the facsimile f the original Lascaux – and in future will be visiting Lascaux 4, but that’s another story.  Lascaux 3 is a mobile exhibition that went from Bordeaux in France to Chicago, Houston and Montreal. It is currently in Brussels and will be going to Paris, Geneva and Tokyo. It will certainly ‘whet people’s appetites’ for Lascaux 4 which will be much larger and comprehensive. 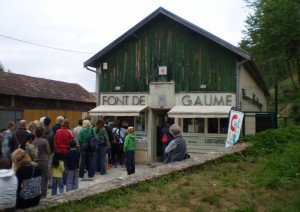 A few tickets are available on the day, but many folk are disappointed, especially in the high season.

Unfortunately, similar problems are arising in Font de Gaume and there has been concernfor some time about the condition of the cave.  During 2013 monitoring equipment was installed which gives statistics about the air quality and there is a definite correlation between increased humidity and increased visitor numbers – not surprisingly. The guides were observed and the length of Tours timed so the affect on the humidity could be observed.  As a result of these studies, the optimum Tour length was worked out and also the optimum number of visitors to be permitted to keep the cave in balance.  Sadly this number is drastically down on previous years – it is only currently 80 visitors a day, whereas when we started doing Tours in 2007 it was 180 per day. We always endeavour to book advance tickets for our guests so they don’t have to queue like this. You have to get up early! 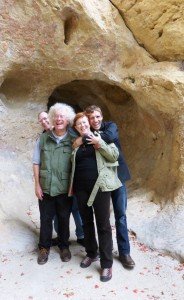 Steve with recent group – they were amazed at Font de Gaume! Don’t miss out.

It is hoped that these measures will keep problems in check – unlike the original Lascaux – and closure will be avoided. But, be warned, if the problems persist and increase the cave will be closed to visitors and another opportunity to visit an original cave will be lost.  We are privileged to have access to this and other sites and we should not take it for granted. This is something that not all visitors seem to understand – these caves are fragile and irreplaceable, so frustrating as it is, it is also understandable to us that entry is restricted.

Steve’s brother was a man of wise words – one of his sayings was “you only regret the things you don’t do”.  So don’t end up regretting it, plan your visit to the Vezere Valley and Font de Gaume sooner, rather than later!