Sant’Antioco is a small island off the southwest coast of the large island of Sardinia, an island squared you might say. Sant’Antioco is afflicted by two winds: the maestrale from the northwest and the levante from the east. One or the other blows nearly every day, but since they take turns, there’s always a calm sea for fishermen on the leeward side of the island. 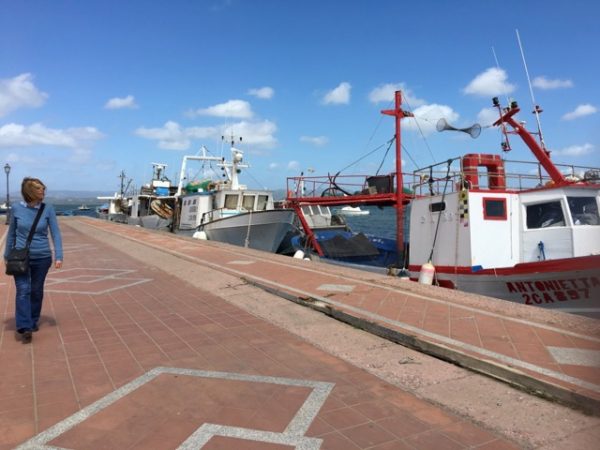 Blowing from the northwest

On a bright spring morning the fishing boats are tied up to the quay, squeezed in side by side. Too many fishermen chasing too few fish. 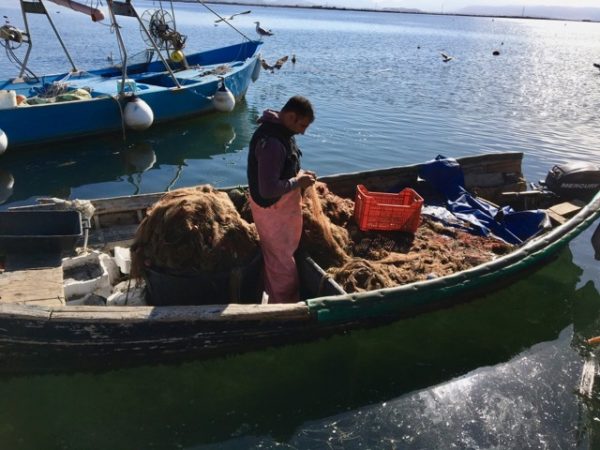 A fisherman patiently removes fish from his net while waiting for customers to arrive and buy them.

Many of them augment their income by offering pescaturismo, fishing excursions for tourists. I’m excited. For years I’ve wanted to learn about fishing in the Mediterranean, but it took a long time to find the right place and fisherman. 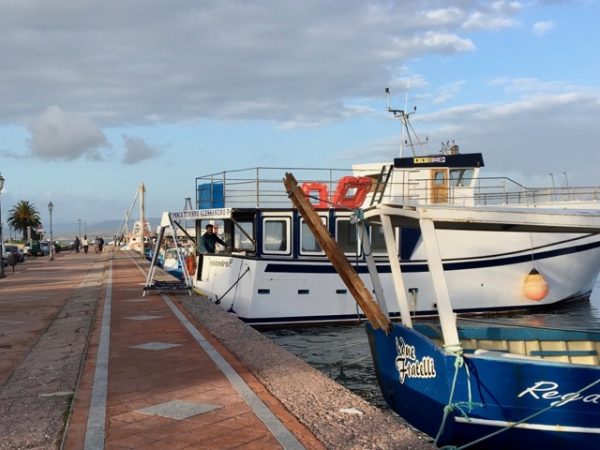 A fishing boat doubling as a tourist attraction.

We arrive at our boat the ‘Alessandro P.’ and the live Alessandro, son of fisherman Mauro Pintus with whom we’re going fishing. Soon Mauro, his wife Roberta and their 14-year-old daughter arrive all lugging groceries. We climb aboard from the stern onto the working deck. 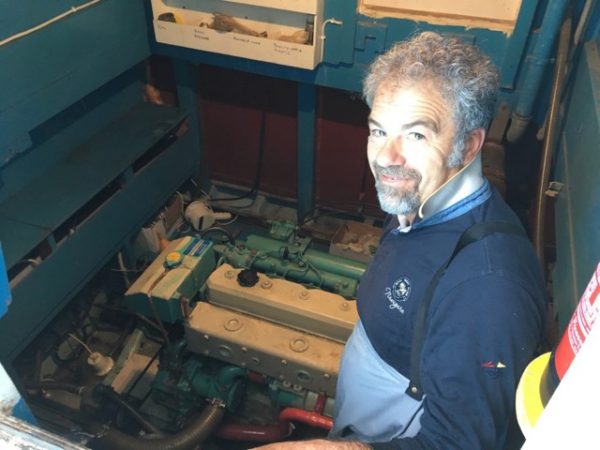 Mauro checks out the engine.

We proceed along a narrow corridor past the engine room and the galley and climb out onto the prow and onto the upper deck where lounge chairs await the non-fishermen in the group.

With Mauro at the helm we chug out into the lagoon to find the nets Mauro and Alessandro set last night. This must be travel at its slowest, apart from crawling. The distance we covered by mini-van in five minutes takes at least thirty in the boat. I thought it might be boring, but at this speed there’s an infinite variety of detail to observe: birds overhead, features on the shore and especially the changing colour of the sea. 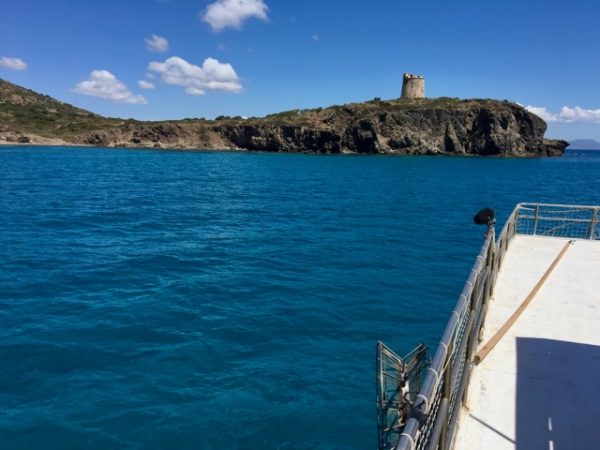 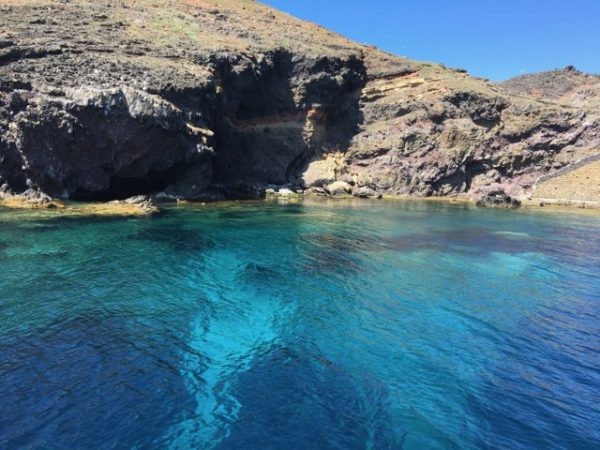 After a while we stop seemingly at a random spot in the sea, and the action begins on the working deck. We’ve reached one end of Mauro’s net which he laid the night before. He marks the end by tying an empty plastic container to it which floats on the surface of the sea. Now we learn what the strange wheel on the port side of the boat is for. 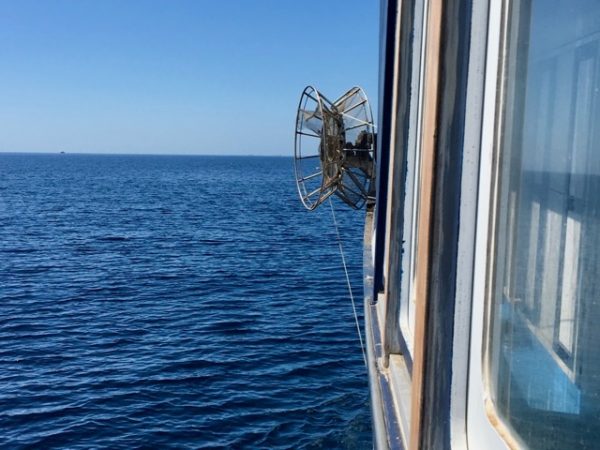 Pulley to reel in the net 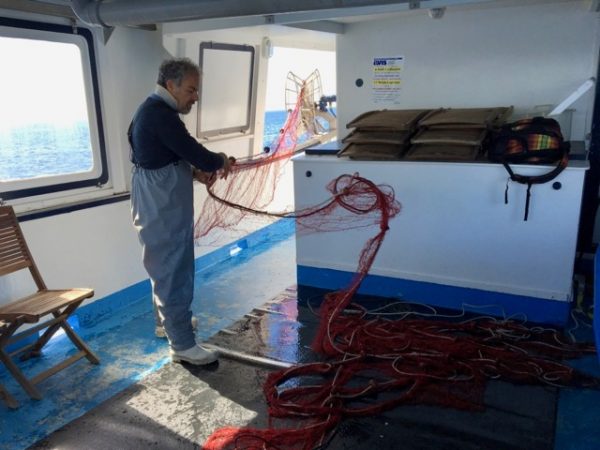 Mauro begins to reel in the net. 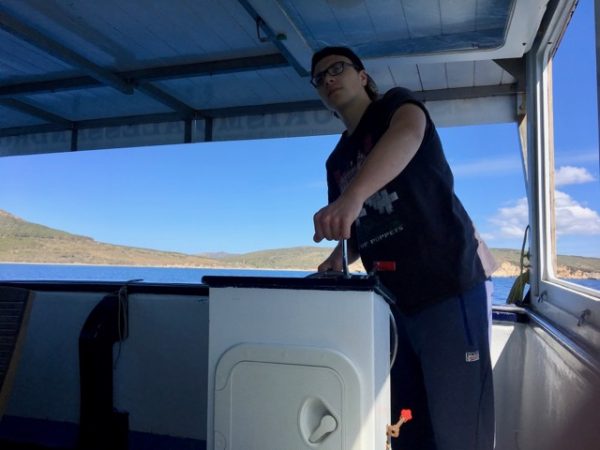 Alessandro is still learning from his dad, who shouts instructions to stop or go, always following the line of the net.

The net isn’t anything like I’d imagined. I guess I’d been thinking about illustrations in children’s books of a large square net that gets filled with fish and you pull it up from the four corners. Instead this is a very long, narrow net, about a metre in width and a kilometre long with a thick rope running along each side. 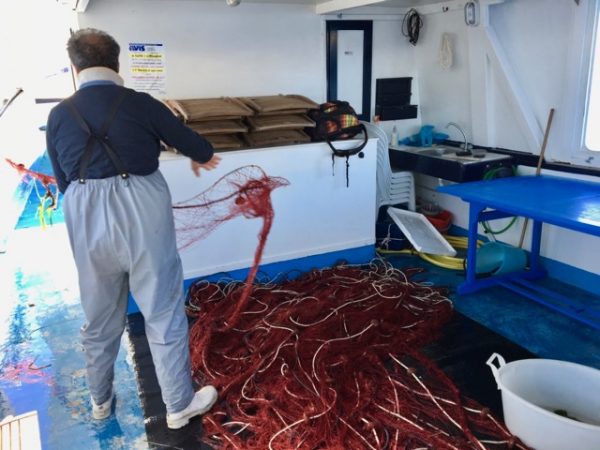 It takes a long time to reel in a kilometre of net.

At first there aren’t any fish. Then a couple of sea cucumbers. Not edible, says Mauro. He uses them as bait. 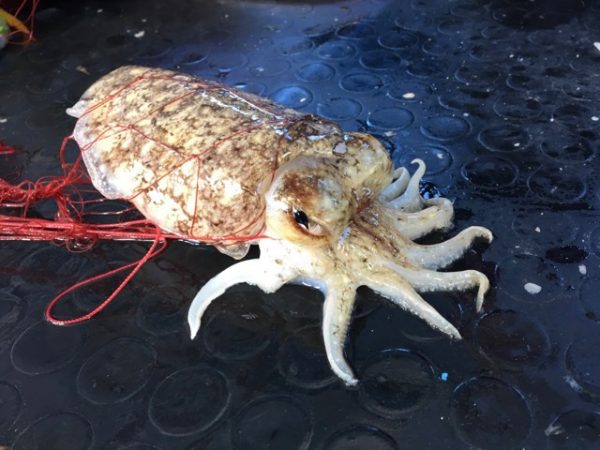 I feel sorry for this creature, but I’m also a carnivore and am sure our ecosystem wouldn’t work if we all lived as herbivores at the bottom of the food chain with no one at the top eating meat. But I also want to be aware of what is being killed and how. 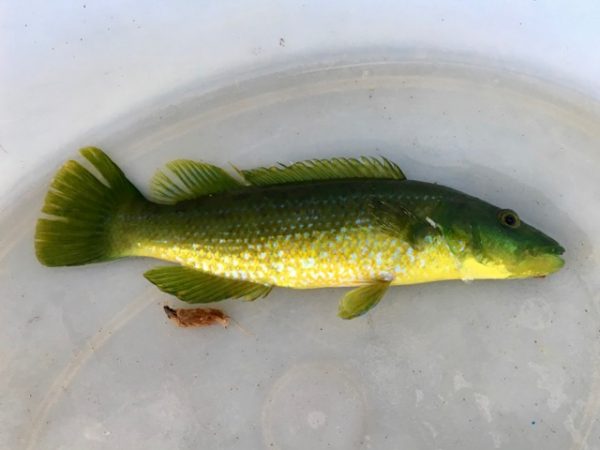 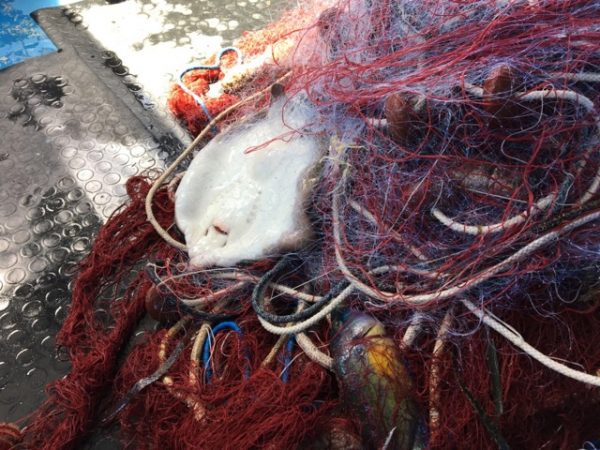 Mauro invites us to help take the fish from the net as he continues to reel it in. 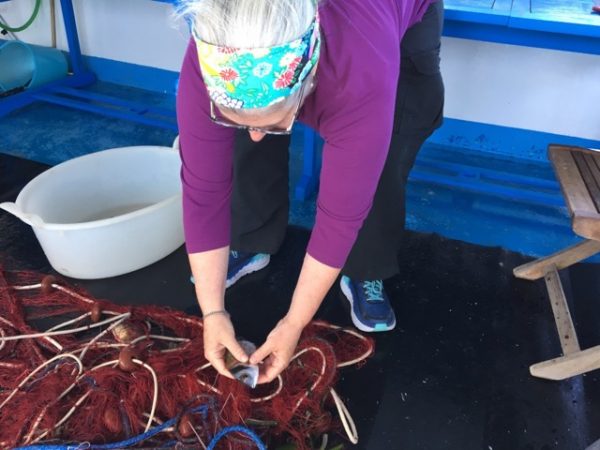 Claudia attempts to untangle a fish from the net. 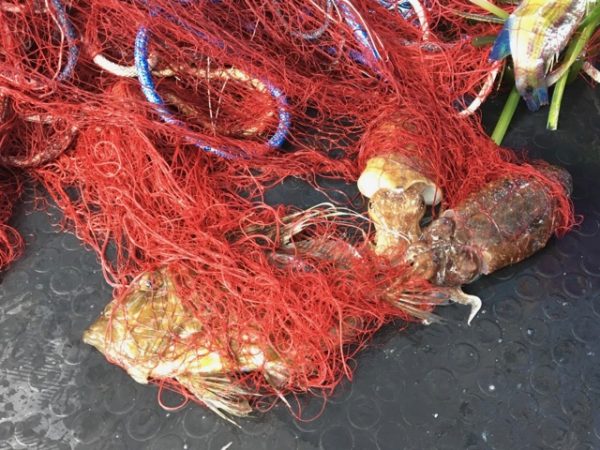 This fish is bigger than the holes in the net and its fins keep getting caught.

Even though we follow Mauro’s instructions to extract the fish head first, it’s not easy. If lunch relied on us, we might starve. 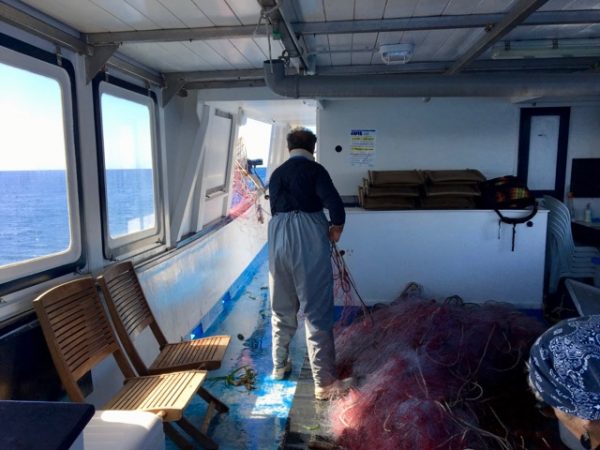 Still reeling. It’s beginning to seem as if it’s an infinity net. 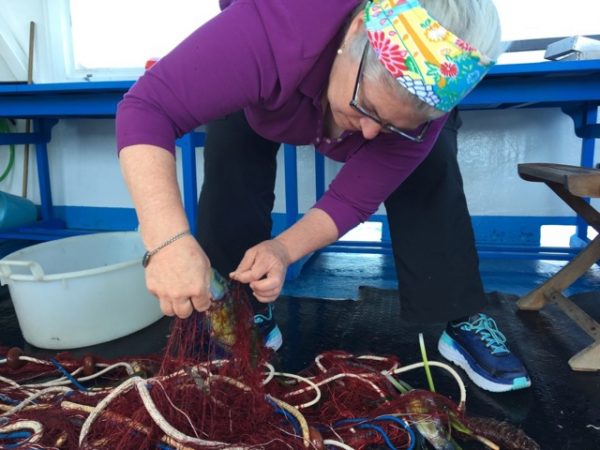 Claudia still working on that fish. 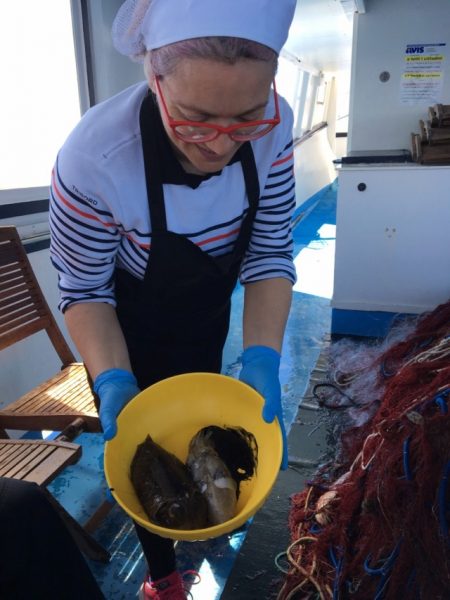 Roberta comes to see what fish she’ll have to cook for lunch. We’ve managed to free a couple of seppie.

Finally we come to the end of the net which is piled in a heap on the working deck. Mauro joins us at the task of untangling fish from the net. We soon tire and go look at the scenery from the upper deck. 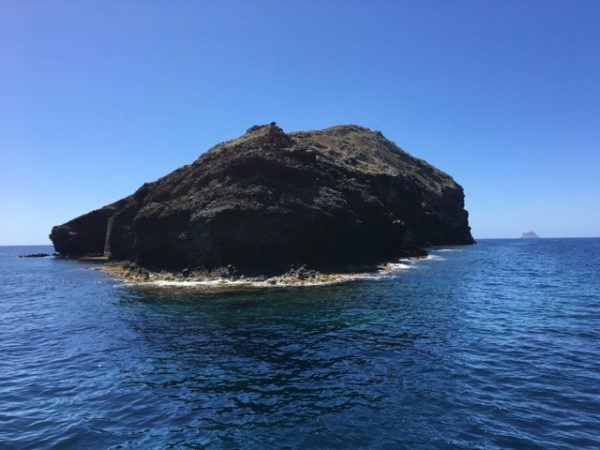 Isola della Vacca (Cow Island) and the tiny Isola del Tauro (Bull Island) in the distance. Surely too far away to have produced the rock called Vitello (calf).

Good smells waft up from the galley. 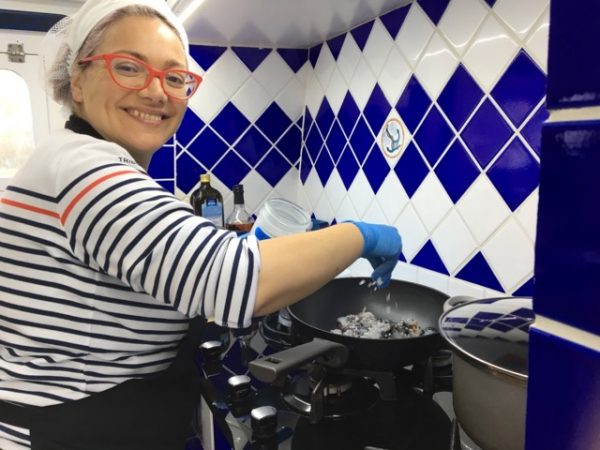 Roberta is working on several dishes at once. There’s no fishy smell from fish straight from the sea.

When we’re called to lunch, we find the working deck transformed into a cheerful dining room. 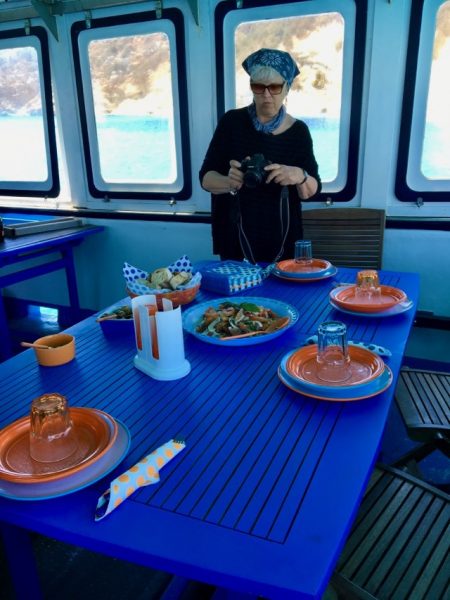 Marilyn is wondering what’s on the menu? 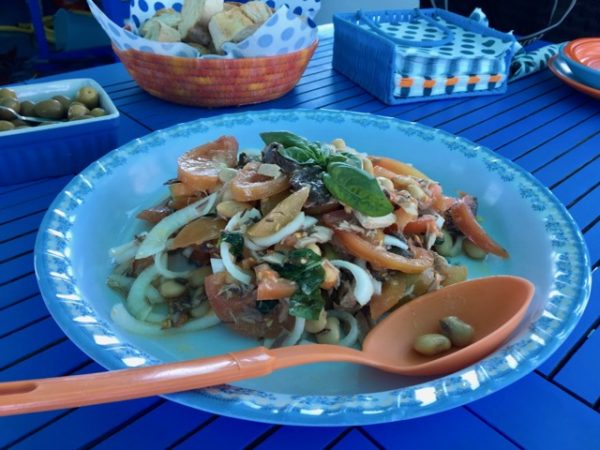 I ask Mauro about tuna. We all believe that tuna is fished out. I’ve been avoiding eating tuna for several years, but will have to be polite. Mauro states that there are too many tuna. That’s why the catch is so small. Tuna are at the top of the food chain, and if there are too many, like the wolves eating my shepherd friends’ lambs, they decimate the populations of smaller fish. So why are we always hearing that there are no tuna left? He says it’s mainly due to the politics of fishing. Who’s allowed to fish where and how much. He presents it as a war between fishermen and politicians with marine scientists and environmentalists somewhere in between. Clearly some more research is in order.

He and Roberta and two other fisher families have formed a cooperative to bottle tuna and two fish salads, octopus and mixed seafood. The men fish and the wives work in the bottling plant which we visit when we’re back in Sant’Antioco. 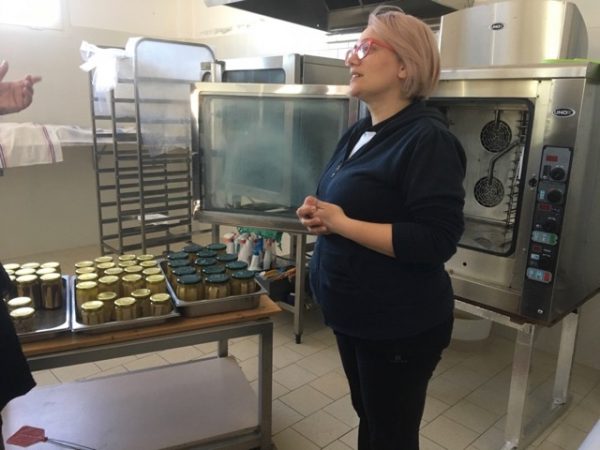 Roberta explains how they do the processing.

Whatever the truth about tuna, this is the best tuna salad I’ve ever eaten. 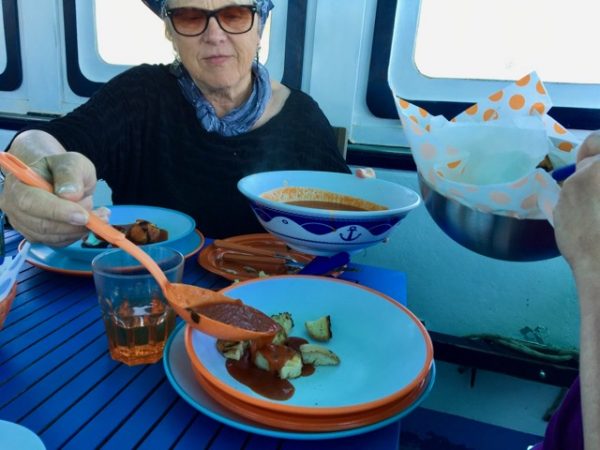 Marilyn dishes up the next course which is a zuppetta.

The zuppetta is a rich tomatoey fish broth ladled over toasted bread. 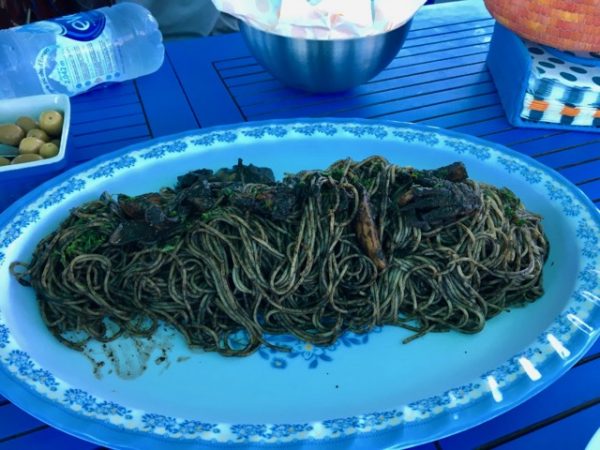 A stunning spaghetti in seppie ink with gamberi (prawns) comes next. 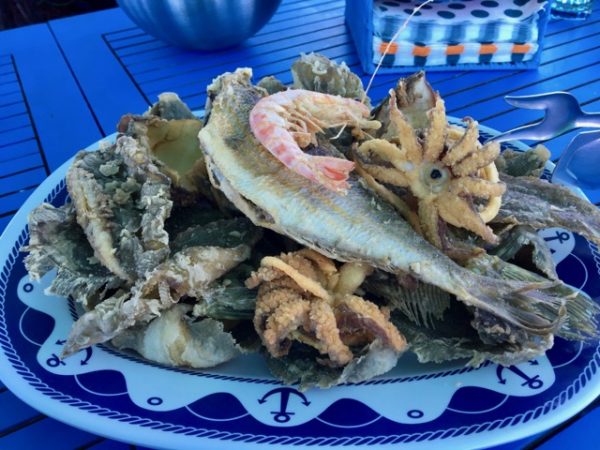 By now we were struggling, but the fried fish is light and not at all greasy. A joy to eat. But this isn’t the end after all. 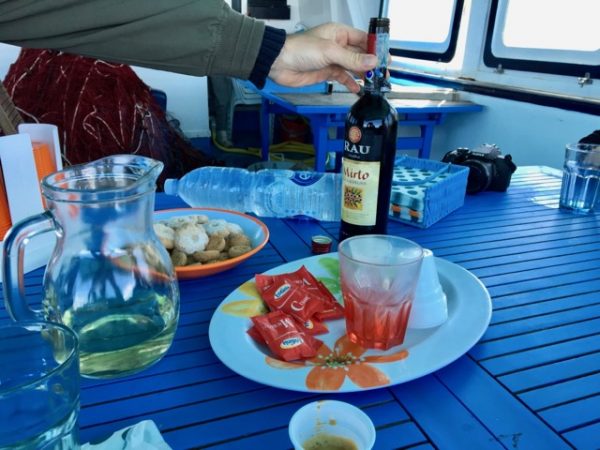 Some biscuits appear along with a bottle of mirto, the typical Sardinian digestivo.

Mauro disappears for a moment and returns with his guitar. We hadn’t been expecting entertainment. It turns out Neil Young is one of his favourites, and he’s delighted that Claudia knows a few songs.

We won’t win the Eurovision Song Contest, but it’s a lot of fun. 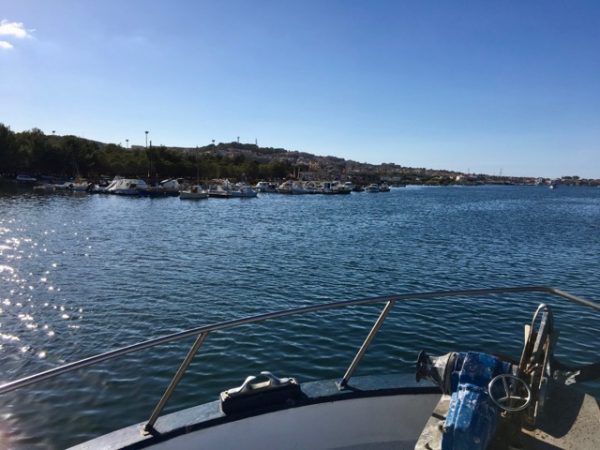 With the sun setting we head back to Sant’Antioco. 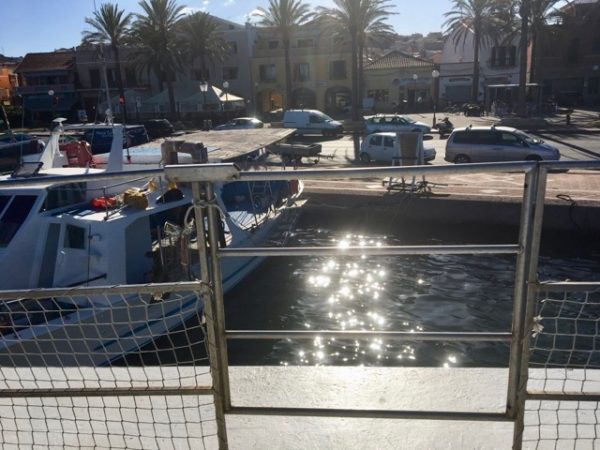 The end of a perfect day at sea.

Come fishing with us next April http://www.sapori-e-saperi.com/small_group_tours/celebrating-sardinia/