I scream, you scream, we all scream for ….GELATO! 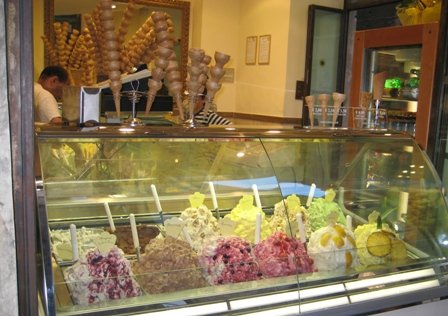 It was blazingly hot in Florence in late May – a good excuse for multiple daily visits to our favorite gelaterias as we introduced our grandchildren to the delights of Italy.
The apartment we rented  happened to be just around the corner from Vivoli, Florence’s most famous gelateria, so right after dropping off our luggage at the apartment we began the kid’s gelato education there.  And from there, this important phase of their gustatory education continued through our days in Florence:
Our grandaughter, Cassidy, tried different flavors on our gelato tour, but grandson Connor, delighted with his initial choices of cream and orange at Vivoli, became quite the expert on the very best of those two flavors as he sampled them at each place we paused.
Our first stop in France, on the way to our house in the Languedoc, was a short overnight in Nice, and we made sure to fit in a stop at Fenocchio in old town.
With their hundred flavors to choose from, each one of us could find just the right taste for our evening stroll through Vieux Nice.
We spoiled ourselves with gallic tastes while in France, no more gelato til the night before we flew home, when Amorino in Aix en Provence proved a nice finale to the ice cream adventure, with it’s rose-shaped cones.
A few weeks after the European trip with our daughter and family, she and the children came to Virginia for a quick visit, and we continued the gelato hunt there. For a few years I’ve had my eye on the gelato counter at Wegmans grocery store. Each time I meet a friend there for coffee, I’m tempted by the colors and flavors, but had not yet tried it. So after lunch there, we all had a cone. As Connor licked his I watched him: “Well?….”
“No, Gran, this is NOT gelato.”
It looked like it! But just didn’t have the taste and consistency.
That very weekend, a new gelateria opened up within walking distance from our house, so one evening we walked over and joined the long line snaking out the door. Would this be the real thing?
Yes indeed, Pitango does it right – we all were transported to Italy with the first lick. What a treat to have this place so close!
And the hunt continued as we spent a long weekend in Naples, Florida with the family. They live in Orlando, and have not been able to find any authentic gelato there, and our daughter Sunshine, a terrific researcher and planner, had read about one in Naples. So after a fun afternoon at the beach, we sought out Freddo. I can still taste the salty caramel gelato – one of the best I’ve ever had.
I’ve heard that Grom has opened a couple of outlets in New York City – we’ll have to try that out next time we’re there. We can imagine standing in the shadow of Florence’s campanile (yes, Torino is the home of Grom, but we’ve only tasted their gelato in Florence) while licking our cones.
Any other gelato finds in your part of the world? Pass on the hints so we can all enjoy it!
************************************************************************************************

The best way to describe us (Kirk and Anne Woodyard) is that we’re interested in the stories that make the places we visit come alive.
We’ve visited Europe more times than we can count, learned some entertaining stories there, and met some warm and helpful people who also enjoy the wonders of music and life in Europe.
Between our music-related travels, we split our time between our homes near Washington DC and the Languedoc in the south of France. We look forward to sharing these stories and friends and experiences with our Music and Markets guests.
While both of us have experience in organizing travel and music groups Kirk’s background is in project management and competitive writing, and Anne is an accomplished pianist with over thirty years of teaching experience, and a travel and food writer specializing in France and Italy.