The long awaited opening of the facsimile of the remarkable cave discovered  18th December 1994 by 3 speleologists (cavers) has at last happened.  On 10th April 2015, it was officially opened by Presidente Hollande and then Saturday, 25th April was opening day to the public.  For us, it so often happens that events take place when we are not here in France or not available for some reason – but this time, the timing was perfect. Before the beginning of our guiding season, we planned a visit to Roman Provence (that’s another story!) followed by a visit to the Ardeche where ‘Chauvet’ is located.  Like the Dordogne, it has stunning scenery with cliffs and rivers, although it is more mountainous, the geology is also limestone (good for cave formation). 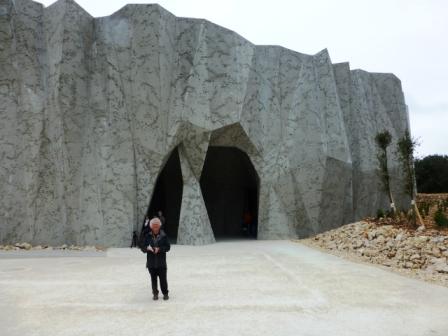 Steve emerging from ‘Chauvet’ – looking more than a little pleased!

Chauvet was named for the first of the 3 speleologist discoverers to actually set foot in it – Jean-Marie Chauvet.  Being the smallest of the group, Eliette Brunel was the first to actually see into the space that Jean-Marie had discovered by feeling a draught of cool air – a sign that there is a cavity in the ground. The third member of the team was Christian Hillaire.

How awesome it must have been to wriggle into the tight space and see the calcite formations that are at the beginning of this vast caverne. Then as they made their way through the darkness only with the aid of their head torches, to have wonder after wonder unfold.

This was the beginning of what would be a long road to the 10th April 2015, the opening day.  The team called in Jean Clottes, an eminent prehistorian and Chief Inspector of Prehistoric Art in France.  He visited with the discoverers and was overcome by emotion at what he saw. The perfection and quality of the artwork has to be seen to be believed.  It was quickly decided that this space could not be opened to the public. There could be no possibility of these precious and fragile works being damaged in the way that the Lascaux paintings had suffered – initially from over-visiting and more recently from use of inappropriate lighting or investigation methods.  It would only be archaeologists, scientists and the privileged few who visited this cave in the interest of protecting it.

To keep this brief, we will move on to the replica cave that is now accessible to all.  What the visitor sees is amazing – but also the process of creating it is an incredible story in its own right (to follow). 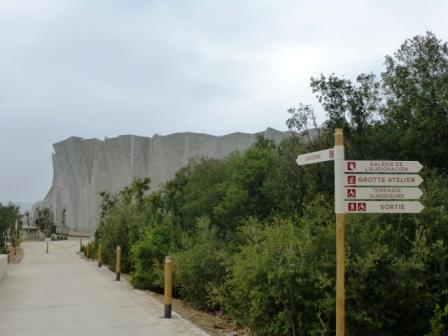 After the site guide’s brief introduction, a door slides back – the scene takes your breath away – a magnificent calcite stalagmitic wonder with the caverne winding away beyond it, the walls adorned with magnificent images and geological marvels.

The very first image is hidden behind the calcite – a tiny image of a mammoth just faintly visible through the age old layers, which are invaluable for dating and authenticity.  This cave is the most securely dated of any so far discovered – having been sealed by a rock fall 21,000 years ago and uncontaminated by inappropriate investigation, the dating is – pardon the pun – rock solid!  225 readings have been taken and the results show the age as 34,000 – 36,000 years ago.  Lascaux is a mere youngster at 17,000 years old! 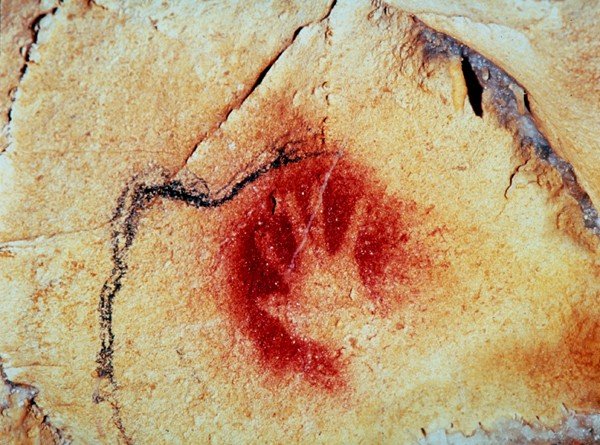 How like the images in Pech Merle! But that was so much later than Chauvet (Caverne Pont d’Arc)! ®JeanClottes

The visit then proceeds – there are 10 stations and at each stop the guide explains and points out the special features, for example, the horses (this maybe the most familiar image from Chauvet?), the palm prints, the butterfly – and perhaps our favourite, the only known cave art image of an owl!   It is indeed an awesome journey which culminates in a 12 metre long hunting frieze which runs from right to left. Lions chasing bison, rhinos running in all directions, 2 fighting each other.  The use of perspective and the way movement has been portrayed is awe-inspiring – it is the first ever animated film!  And in the midst of it all is a perfect image of a horse set back in a niche in the centre of the scene; it fits the space so perfectly.  It’s hard to comprehend how all this could be produced with just the light from flickering lamps or torches – and our ancestors could not have stepped back and taken in the entire scene as are able to with modern lighting.  We can never truly understand the thoughts and emotions behind these wonderful works of art – but how privileged we are to be able to see it in all its glory. And it is thanks to all the dedicated artists and technicians who have created this space for us to enjoy – in their own way, they have achieved every bit as much as Mother Nature and the original artists and are to be highly applauded. 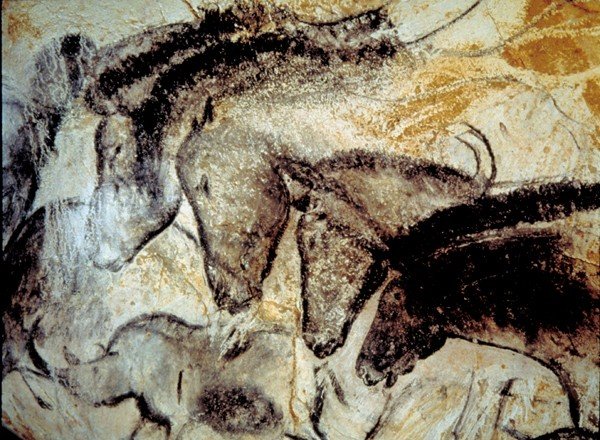 If you have an opportunity to visit this very special place, now known as Caverne Pont d’Arc, we would urge you to – and remember as you following the winding walkway, everything you are seeing – the ground areas, the walls, the entire structure and, of course, the artwork has been painstakingly recreated – it is so realistic, it is hard to believe it is not actually rock surfaces and geological formations formed millions of years ago.  It is a real masterpiece.

Further information is available on our website. To book tickets go to www.cavernedupontdarc.fr – there are 7 English Tours per day. Unfortunately, it is too long a drive from the Vezere Valley where we are, near the Lascaux ridge, but we plan to produce an e-guide to Caverne Pont d’Arc/Grotte de Chauvet.  So although you won’t be able have the benefit of Steve as your personal guide, it will be like having him as a guide-in-your-pocket!  If you want to be kept up-to-date about this, drop us an email.