Why ‘Medieval’?  – why not a Medieval Castle? – because Guedelon ‘medieval’ castle is being built right now!

It is a site we have known about for a long time since we moved to France, but our trips to and from England didn’t allow us the luxury of deviations to go exploring (perhaps as members of Slow Travel Tours we shouldn’t admit to this!)  But more recently, we have been able to travel more in keeping with the Slow Travel Tours philosophy.  Thus we, at last, made a visit to Geudelon – a ‘medieval’ castle in the making in northern Burgundy, south-east of Paris. 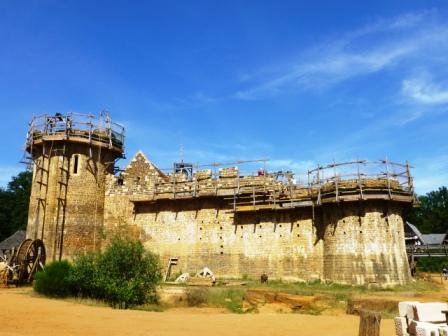 Guedelon –  a ‘medieval’ castle in the making

In the forests of northern Burgundy, one of the most extraordinary archaeological experiments we have ever seen has been unfolding.  Guedelon is a 25 year project which since May 1998 has been allowing visitors from around the world to watch a team of builders construct a castle using 13th century techniques. 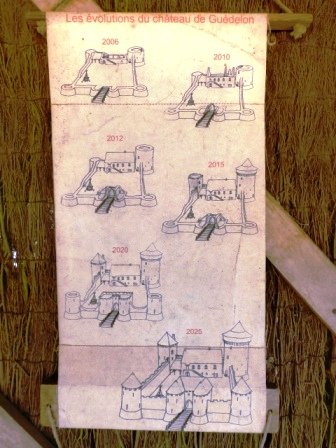 Saint Louis (Louis IX)  reigned from 1226 to 1270; a time when the construction of stone buildings was at its height and when the Capetian kingdom of France was at its most potent.  The kings of the 13th century followed the lead of Philip Augustus (ruled 1180 – 1223), consolidating and extending their power within (and without) France, to be the most dominant force in Western Europe.

But to come back to the present.  Absolutely everything needed for the building of this ‘medieval’ castle is on site or very close by.  The iron-stone quarry for the majority of the masonry is less than 50 metres from the north wall of the chateau (castle), the pale cream limestone for window details no more than 15 kilometres away. The site is in the depth of huge forests, filled with oak and chestnut trees for all the complex carpentry needed.  For good measure, a plentiful spring of water was discovered only 6 metres down, right in the middle of where the castle courtyard will be.  This was definitely a huge plus, considering the amount of lime mortar that has been and will be mixed to create the thick, towering, stone walls. 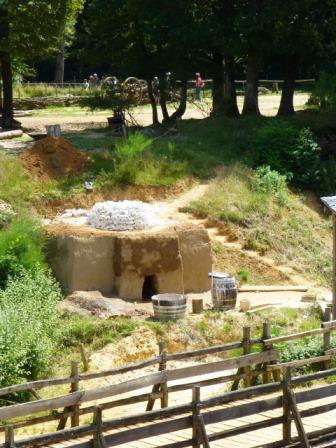 The idea for building a castle from scratch arose from an archaeological report written for the owner of the chateau de Saint-Fargeau, Michel Guyot.  For 20 years he had watched in awe as a succession of craftsmen had worked on its restoration to its former glory. The report had identified the 13th century origins of the chateau, and thus the idea of this “amazing project” was born.  Voila, as the French would say.

At the heart of the project are 40 professional craftsmen.  They are helped by teams of volunteers who want to share in this amazing ‘chantier’ (building project) both in the physical labour and in the interaction with the hordes of visitors – Guedelon is the second-most popular tourist attraction in Burgundy after the medieval Hospice (hospital) at Beaune. 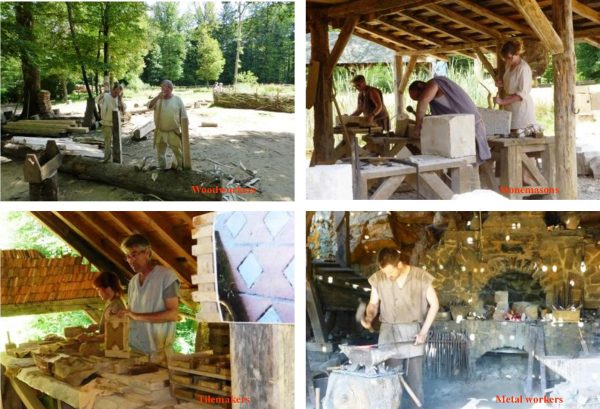 Some of the traditional trades people at Geudelon

There are also 3 animals, vital to the project – the cart horses that transport materials on site.  They have been chosen for their calm temperament, essential when so close to the public. They are Kaboul, an Ardennais, Idole, a Percheron and Paloma, a Comtois originally from the Jura mountains. It takes nearly two years to train them for the very specific demands of the site – for example, manoeuvring with extreme precision backwards!  Though this is a 13th century site, horses (and all the other workers) are protected by 21st century laws so the three are only allowed to work on average two hours a day.  The same laws also stipulate that the ‘medieval’ scaffolding should be secured with modern bolts in the interests of safety. 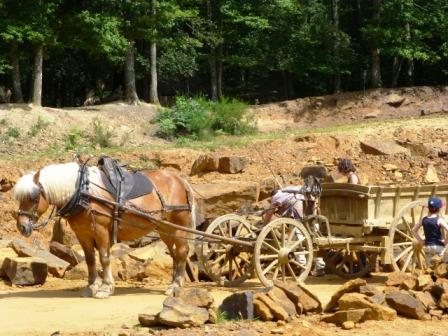 Even materials are transported in the 13th century way

Steve’s brother once said “you only regret the things you don’t do” – we certainly regret not having had the time to deviate from our usual route in previous years to have been able to follow this site over the last decade – but this surely won’t be our one and only visit!