I will never forget the first time I drove through the Ribeira Sacra, a series of hillsides and valleys in the Galician interior.  My mother and I were on our way from Pontevedra in the 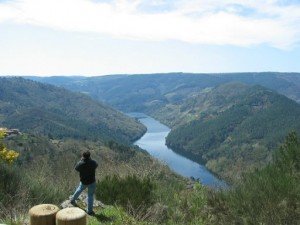 southern part of Galicia to the parador in Vilalba, and our route took us up motorway 540.  We drove through a lush and mysterious valley, covered in vines and dotted with  Romanesque churches.  I was immediately transfixed – on the road from point A to point B I had no idea I would be visiting this area many times in the future.  Something about the energy coming at me from those hillsides went straight into my heart.

Later on, at the parador, I went into the bar and saw for the first time in my life, Ribeira Sacra wine on a menu.  Knowing it was local but not knowing it came from the valley I had just driven through, I ordered a glass and was just as mesmerized by the glass of wine as I had been on the drive.  There is something that all traveling wine lovers know – a glass of wine is going to taste better when you are in the region it is made.  And this wine, at this parador, after driving through the region where the grapes were grown and the wine was made was no exception to this rule. 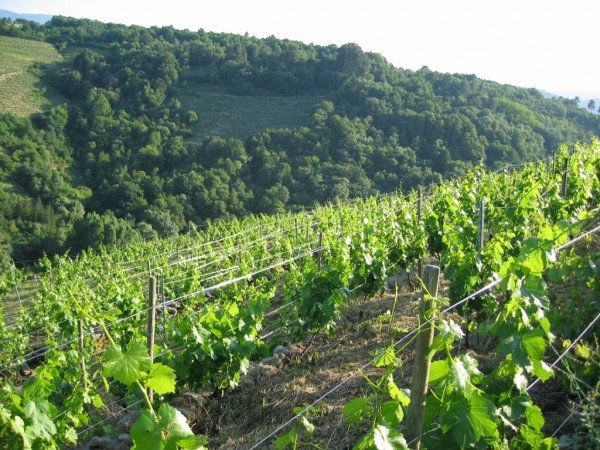 The Ribeira Sacra is a relatively unknown wine growing region to wine consumers outside of Spain.  The vineyards are planted on hillsides so steep that it is virtually impossible to use any kind of machinery on them.  Therefore, all the grapes are picked by hand.  In the past, grapes would have been carried down to the river in baskets, where they would end up in a structure to make the wine or on a boat to take them somewhere else.  This was one part of a river-based culture that the Galicians had until General Franco came to power.  Franco built five dams that essentially destroyed the centuries-old lifestyle that the Galicians lived.  Now, grapes are transported up, or down, to the winery facility or road, either by hand in baskets or by a a pulley system.

When I first started visiting the area, I had a romantic notion in my mind about how much fun it would be to work the harvest there.  That notion was reversed the afternoon I had the opportunity to walk up a few steps into one of the vineyards. The grapes are planted on terraced, narrow paths with a steep walkway dotted with stepping stones.  These particular stones were fairly haphazard and the incline was such that even walking up and down for 15 minutes would cause sore muscles where you didn’t know you even had muscles.  And this was just walking.  I can’t imagine spending hours in the hot sun on those hillsides, or carrying baskets full of of grapes up and down.  It is backbreaking – though of course very seasonal – work. Observe the below photo – do you think you could walk up and down those steps carrying a big basket of grapes? 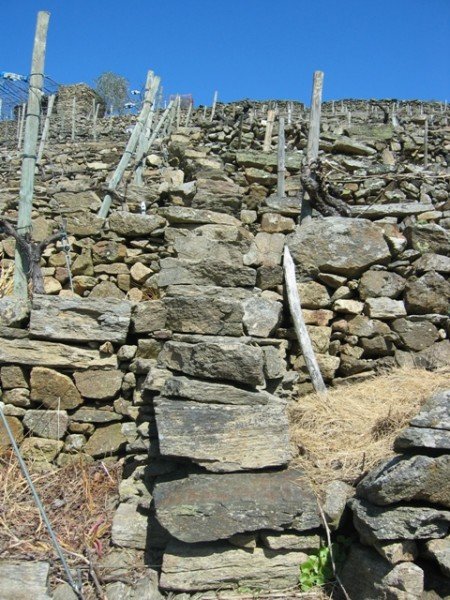 Once, on a sightseeing outing with Irene and Ian who own the fabulous Casa Santo Estevo (where we stay during our tours of the Ribeira Sacra) I was taking some photos alongside the river when Irene suddenly called out “Esther!”  High up on the steep hill, there were a few ant-sized people picking grapes.  One of them was Esther Teijeiro Lemos, owner and 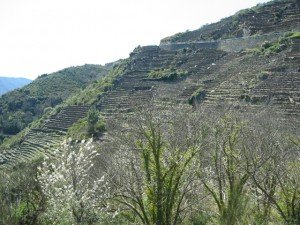 winemaker of Bodega Diego de Lemos.  Generally, you would not find the owner of a winery – especially one who is near retirement age – on a precarious slope on an extremely warm day picking the fruit.  That’s what you have employees, or at least grandchilden for.  But there was Esther, waving down at us while I prayed she would not invite us to come on up to join them.  I’m the lazy one and would rather wait until we can meet her at her pretty riverside tasting room and restaurant.

Many grape varieties are grown in the Ribeira Sacra, but the most prevalent and successful these days is the red Mencia variety.  Mencia, which is grown in other parts of northwest Spain but not too much outside that region, makes a light, fruit-forward, easy to drink wine.  If you’ve ever had a bottle of wine from the Bierzo region in Spain, you’ve most likely tried Mencia.  And now the wines from the Ribeira Sacra are more readily available, at least in the United States, than they were when I had my first sip back in 2006.