What comes to your mind when you think about the Cotswolds? Rolling hills with fields of grazing sheep? Buildings of honey-colored stone? Lovely gardens? Perhaps a castle or stately home?

Our Cotswolds Experience groups find all this and more when we spend a morning at Sudeley Castle, a privately-owned castle with 1000 years of history, located just outside the village of Winchcombe in the northwestern Cotswolds. The estate today covers about 1,200 acres, including 14 acres of gardens. 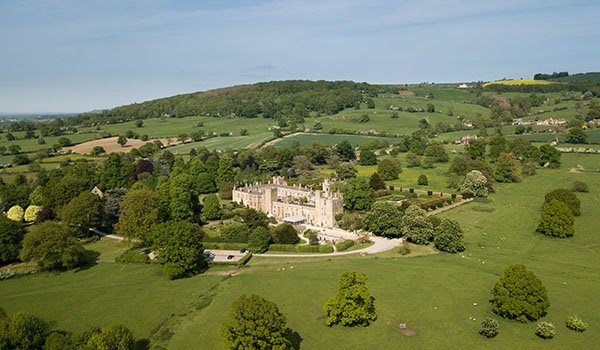 In days past, many famous figures spent time at Sudeley Castle. Richard III owned it (twice) in the 15th century. Henry VIII visited with his then-wife Anne Boleyn in 1535. After Henry’s death his final wife, Katherine Parr came to live with her new husband Thomas Seymour, then the lord of Sudeley. Her ward Lady Jane Grey—another fated English queen—accompanied her. Katherine Parr survived Henry but didn’t survive long after, dying after childbirth a year later. Her stepdaughter Elizabeth I visited several times in the late 16th century. 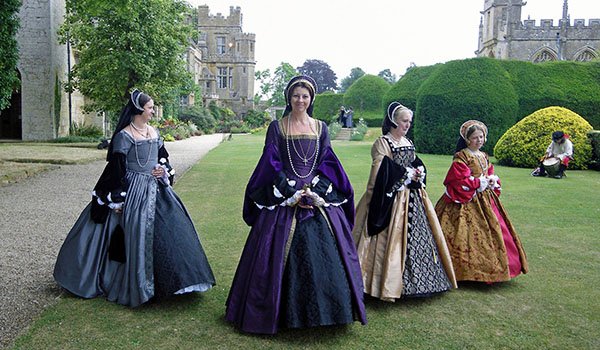 Fifty years later, the splendid castle was almost totally destroyed during the English Civil War and lay in ruin for 200 years. In 1837 the two Dent brothers—wealthy glovemakers from Worcester—bought the castle and began to slowly restore it. Emma Dent’s husband inherited Sudeley Castle in 1856, and she took a serious interest in its restoration and was also a major benefactor in Winchcombe. After her death, her husband’s nephew inherited the estate, and it continues in the family today.

Fast forward to 1969 when owner Mark Dent-Brocklehurst, his American-born wife Elizabeth and their two young children came to live at Sudeley Castle. The couple realized that the only way to save the castle was to open it to the public, and they began a serious program to transition the castle from a family home to a tourist attraction where they could also live. Mark died just a few years later and Elizabeth carried on the project. Now Lady Ashcombe (from her second marriage), she and her two children continue to develop Sudeley Castle. 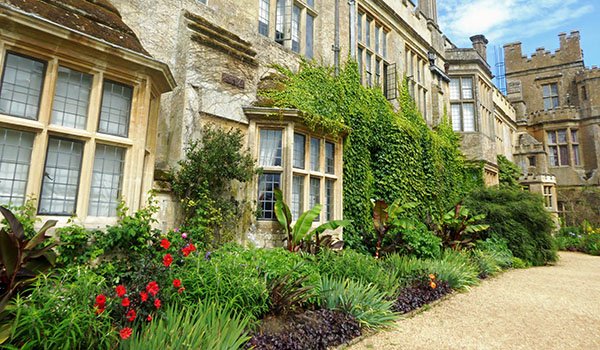 Colorful border outside a restored portion of the castle

We’ve seen many changes over the 10+ years we’ve been visiting. You can easily spend several hours at the castle—or most of a day. There’s land that’s open for local people to walk, often with their dogs and holiday cottages to rent. With the right budget, you could hold a wedding or fancy party here. On school breaks, they run special programs for children.

The owners are creative about other ways to use the extensive property and to bring local people back. Giffords Circus usually performs for a week here every year and sets its big tent up in one of the fields. Once we were there for “Tudor Days.”  Another time there was a food festival set up by the parking lot. Sometimes there’s unique art or sculpture. And I was delighted to spot the castle on an episode of Father Brown (mostly filmed in the Cotswolds).

There is truly something for everyone at Sudeley Castle. Part of the castle is a museum with interesting exhibits about the history and its residents. We especially like the display on the six wives of Henry VIII. Several rooms that were previously part of the family residence are now open to the public. Two of the oldest rooms in the castle were recently as they would have been in the days of Katherine Parr, and there are interesting short films about Katherine and Lady Jane Grey. 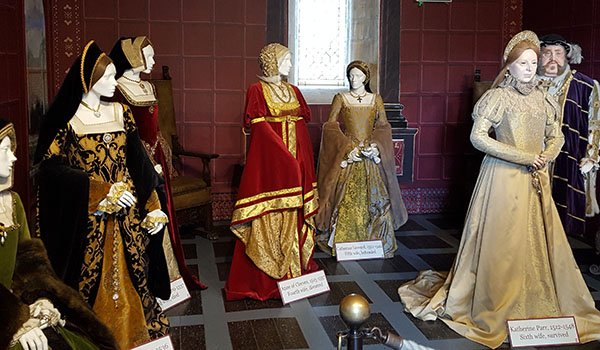 Henry VIII and his Six Wives

The beautiful 15th century Norman church – St. Mary’s– now contains the beautiful tomb of Katherine Parr. She’s the only English queen to be buried on private land. (This article about Katherine Parr and how her remains came to be in this tomb is especially interesting.) The church is actually part of the parish of Winchcombe– not a private chapel, though services are only held here a few times a year. 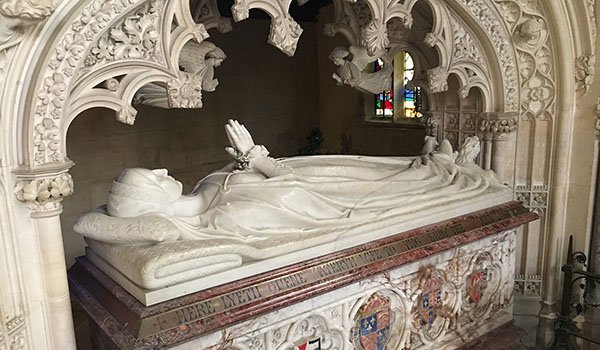 In the Sudeley Castle pheasantry, there are seventeen species of pheasants, several that are extremely rare and endangered. We never know where we’ll find the two peacocks, who roam nearby. 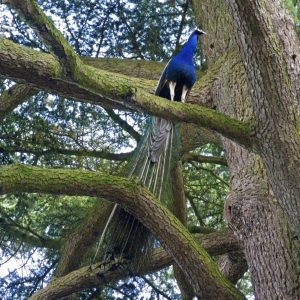 Charley and I often take a break in the large tea room adjacent to the castle, and there’s also a place to have a drink and a snack in the Visitors Center. Of course, I always enjoy browsing in the gift shop.

I’ve saved the best for last, because then there are the gardens– ten different gardens– each one quite different and spread around the property, surrounded by beautiful farmland and views of the Cotswolds hills. The gardens around the ruins of the 15th century tithe barn and the castle ruins are especially unique, and there’s an interesting mix of plants, shrubs and trees. The Queens’ garden is the showpiece, located where there was a garden in Tudor times. It honors the four English queens from the Tudor era with a connection to Sudeley Castle: Katherine Parr, Anne Boleyn, Elizabeth I, and Lady Jane Grey.

And I love the small knot garden, nestled by the ruins of the 15th century Banqueting Hall. The design of this garden is based on the pattern of a dress of Queen Elizabeth I and includes 1,200 boxwood plants.

I like to spend most of my time at Sudeley Castle in the gardens and wandering the grounds, best described with pictures rather than words. This is just a small sample! 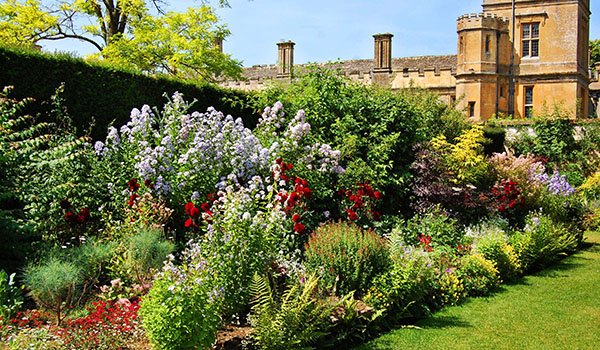 Colorful border in the secret garden 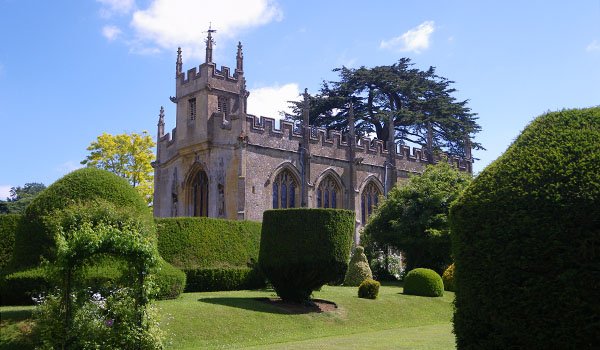 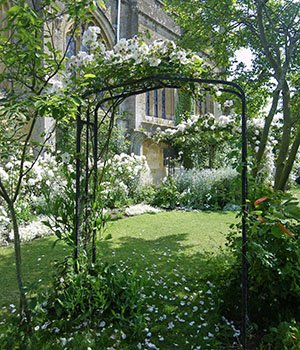 White garden outside the church 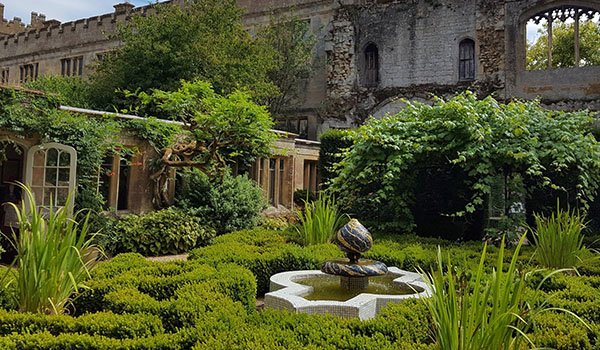 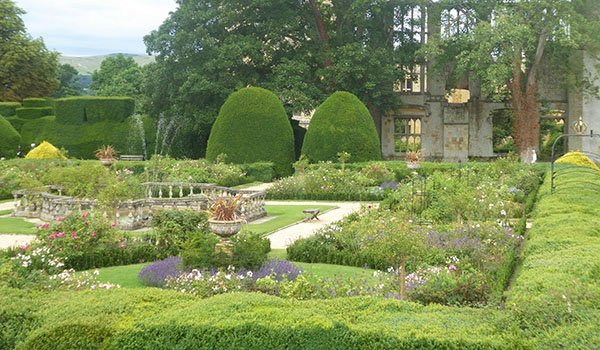 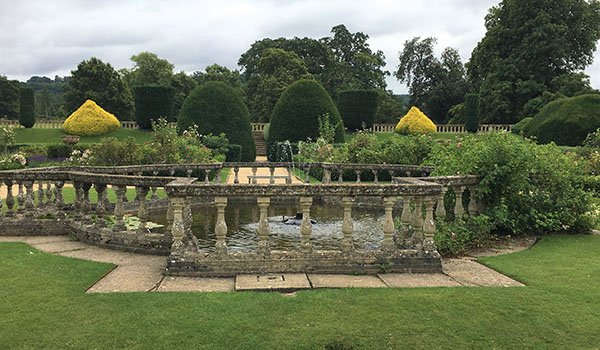 Another section of the lovely Queens’ Garden 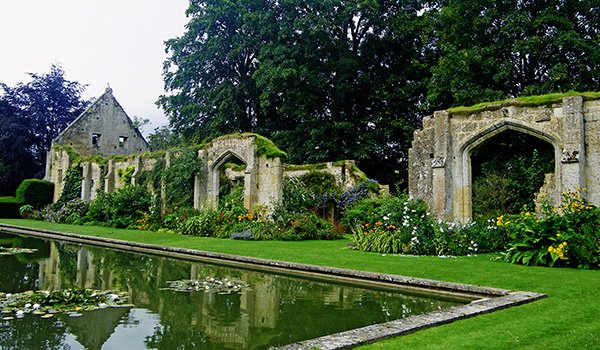 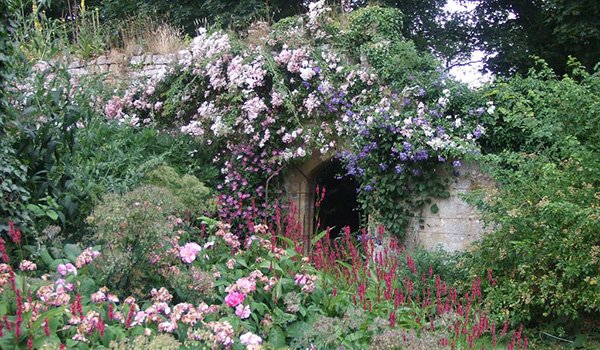 Inside the tithe barn 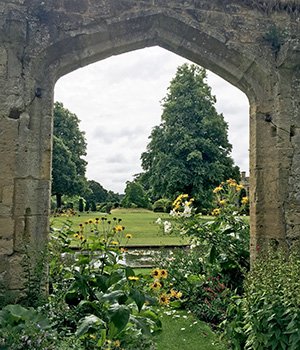 Beautiful views from the tithe barn 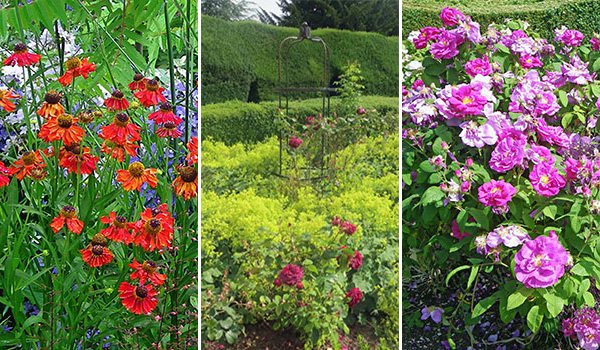 I enjoy the beauty of Sudeley Castle, in the midst of the rural Cotswolds countryside. I enjoy the subtle changes in the gardens from visit to visit, year to year, the lovely mix of colorful flowers. The history is fascinating, and after at least 15 visits, I continue to learn something new every time.

But I’m most touched by the story of the family who took on this legacy and found a way to keep the castle and much of the land still in the family. And that makes Sudeley Castle a very personal place to visit, an intimate experience.

We’ll be back in the Cotswolds in 2021 for our Cotswolds Experience week and also a Return to the Cotswolds week with a special emphasis on gardens. In 2022 we also hope to offer a Cotswolds Walking Week.

Learn more about our Experiences in the Cotswolds in these other blog posts:

Garden Experiences in Cornwall and the Cotswolds

A Cotswolds Experience: The Cotswold Lavender farm near Snowshill

A Cotswolds Experience: A Walk Along the Cotswold Way