At the beginning of May I begin looking hopefully at the mountain slopes across the valley from my village near Bagni di Lucca in Tuscany. I scan the green woods for the first signs of the white, sweet-scented acacia flowers, because that’s when beekeepers will start adding supers to their beehives so bees will unwittingly store honey for us in the extra space and not just for their own colony. In early June I can begin taking my tour guests to Francesca Buonagurelli, a beekeeper. She shows us how a beehive works and describes some of the amazing behaviour of bees. For instance, if you move a beehive a few inches to the right, the bees will only land on the left side of the landing stage, the part that still overlaps with the old position, and it will take them several days to reset their GPS and begin using the portion of the landing stage that is outside the old position. Our favourite show-stopper question is: how many bees are there in a healthy colony? Go ahead, have a guess and send me your answer. 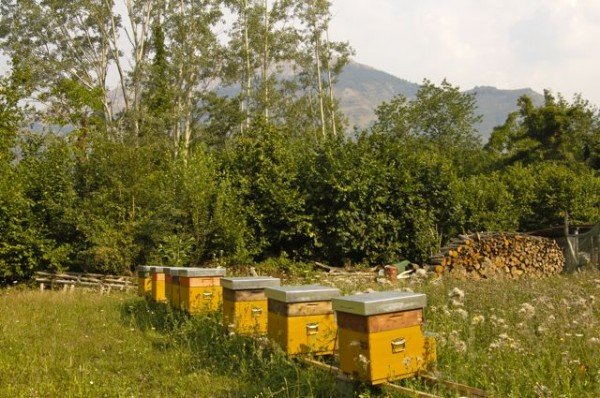 Another surprise is the weight of a frame with a honeycomb full of honey. First our guests hold an empty frame and then Francesca hands them a full one, taking the precaution of not letting go until they’ve demonstrated that they’re strong enough to hold it on their own — especially important with young children. How much do you think it weighs? 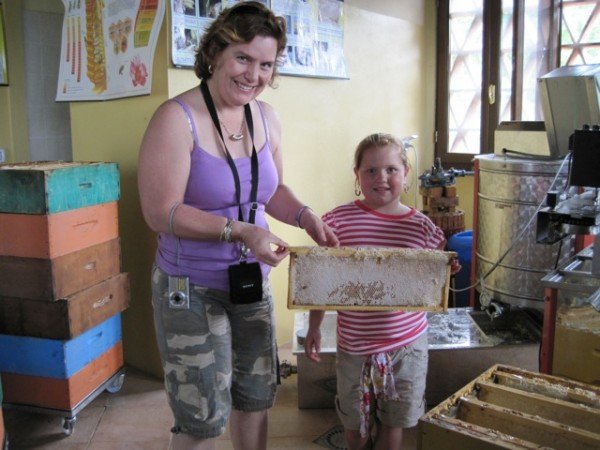 Next we get to help scrape the wax caps off the cells in the honeycomb and taste the honey. 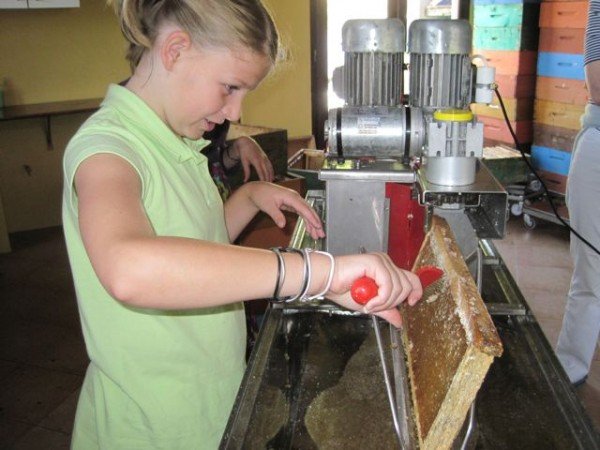 Pure acacia honey is colourless and delicately sweet. In our area beekeepers try to keep it separate from the other types of honey. As soon as they see the acacia flowers dying and dropping from the trees, they remove the supers from the hive so the bees can’t add nectar from other flowers. After helping Francesca extract the honey from the comb, we relax in the shade of her cherry tree for a spuntino (snack) of cheese, bread and honey. Francesca also collects chestnut honey. The chestnut tree flowers from mid-June and the honey is brown and has an attractive bitter edge to its sweetness. A recent custom here is to combine honey and cheese: sweet acacia with the citrusy flavour of fresh pecorino (sheep’s milk cheese) and chestnut with stronger-tasting mature pecorino. 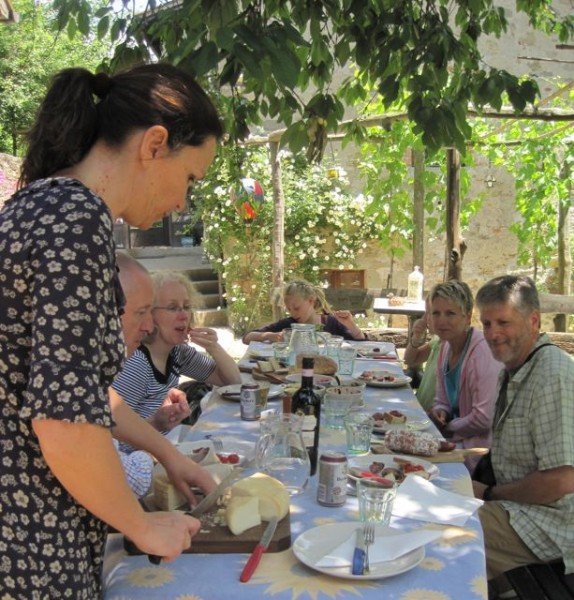 While munching meditatively and contemplating the splendid view of Barga across the valley, I came up with the idea of combining these three country foods in a single week-long tour, and so the ‘CHEESE + BREAD + HONEY’ tour was born. The first one just took place. We stayed in an idyllic, peaceful former monastery, enjoying cushier amenities than the original Franciscans. The tour started with a summer solstice village festival and included making bread in a wood-fired oven with a village baker, a day at a farm watching mamma make pecorino and ricotta followed by lunch and the visit to Francesca to learn about honey, plus walks in the mountains and much more. Next year’s tour will take place from 17–24 June 2012.