On the first night of my June tour Bread, Cheese & Honey we go to a summer solstice festival at the village of Trassilico, strung out along a narrow ridge in the Alpi Apuane high above the Serchio Valley. It was once a fortified town much coveted by rulers from the Romans to the Este dynasty of Ferrara to the Republic of Lucca, and the ruins of a fort crown the summit. 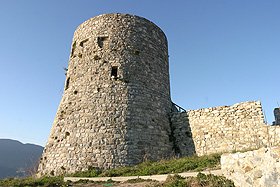 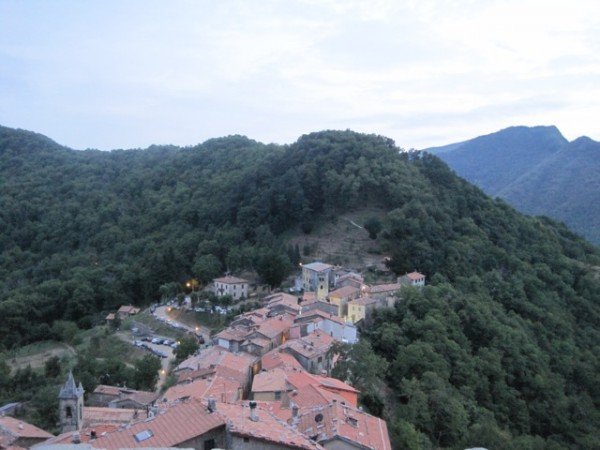 This year a native of Trassilico, a pensioner who had been an archivist in the Lucca State Archives, offered to give us a guided tour of his beloved village. Pietro Rocchi welcomed us on the warm summer evening and led us to a spring with a long history and many legends attached to it. Since he spoke only Italian, it was my job to interpret to my guests. I begged him in advance to speak slowly and clearly and to leave time for me to translate, but his enthusiasm kept running away with him. What he was explaining was genuinely interesting, but its intricate detail was akin to examining each individual stitch in a complex tapestry. There weren’t any historians in the group, and I could see several beginning to shiver in the damp shade of the stone structure around the spring. 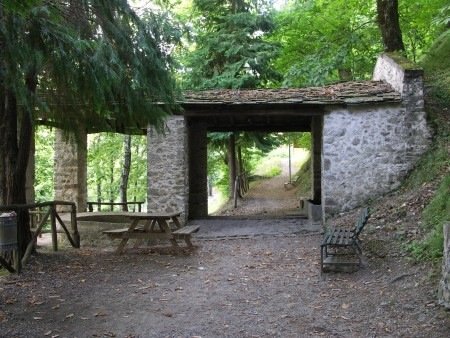 We managed to lure Pietro up to the rocca, the Este fort, still warm in the rays of the setting sun, but not without many a stop on the way to show us the exact spots where the tough inhabitants had bravely resisted recurrent sieges, tricked their enemies and won the battles. Now the group became interested and began to ask questions. 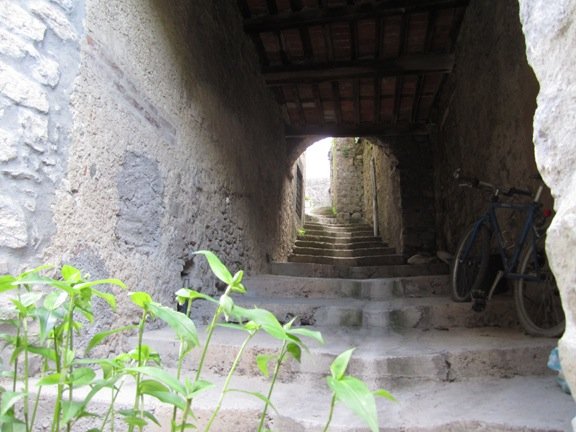 The way up to the fort 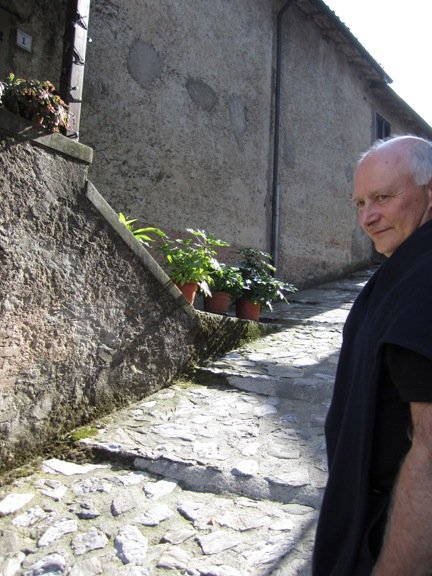 Pietro waiting for us to catch up 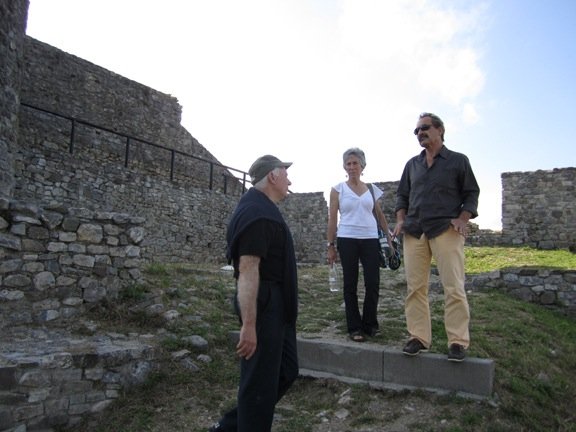 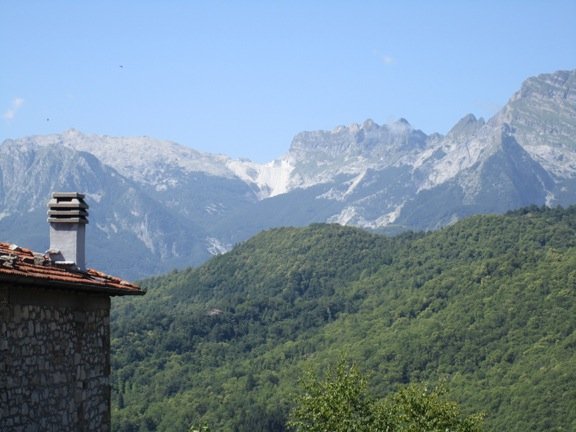 It was worth it

On the way back down to the main piazza by a different route, Pietro showed us a wall partly constructed of old tombstones. He was the person who had deciphered the inscriptions and signs carved on them and had realised that the cemetery from which they came must have spanned the transitional period from paganism to Christianity. The retired Episcopalian minister in the group explained some puzzling symbols, which Pietro was interested to know about too. 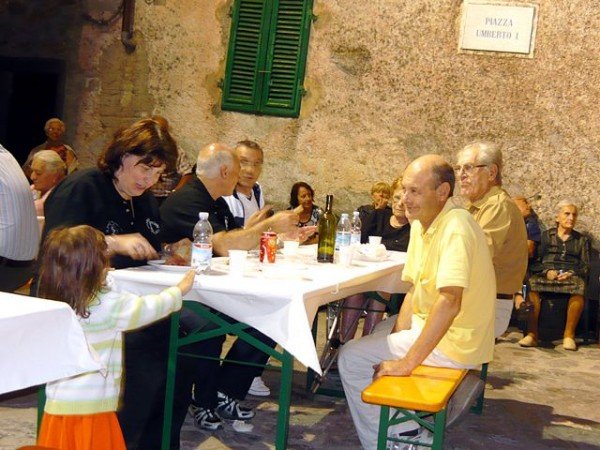 Back in the piazza some of us tucked into the festival food while others preferred a small restaurant that, with typical village hospitality, provided a table for our communal supper, even though we weren’t all ordering from its menu. 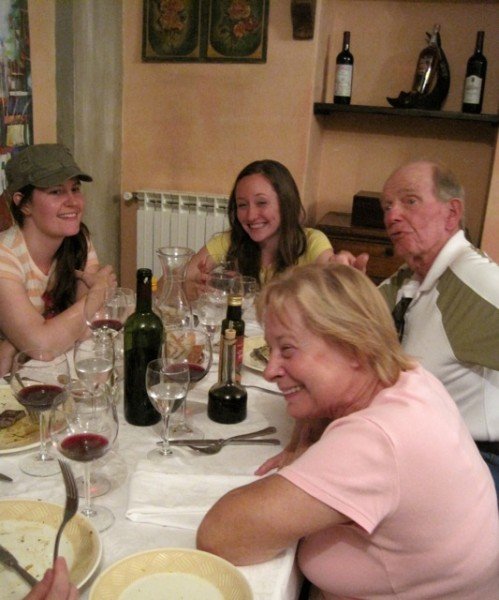 I later wrote to the friend of a friend who had recommended Pietro as a guide to thank him. I said how interesting it was, but perhaps a wee bit too long and detailed. He reproved me with this slow travel wisdom: ‘When Pietro is your guide, he is like a river in flood and from that one sees all the love he bears toward his village. Your clients must keep in mind that a tour of Europe cannot be accomplished in a week or there is the danger of Stendhal’s syndrome.’ The alarming symptoms include rapid heartbeat, dizziness, fainting, confusion and sometimes hallucinations when exposed to a large amount of especially beautiful art or a surfeit of choice among too much beauty. Whew! That was a lucky escape. Much healthier to slow one’s pace, to bathe in the flow of Pietro’s words, to take time to ask questions and engage in a dialogue, and to appreciate the depth of history in a single extremely beautiful village. 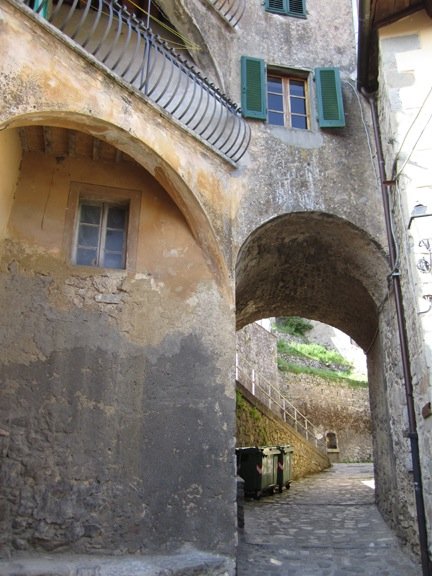