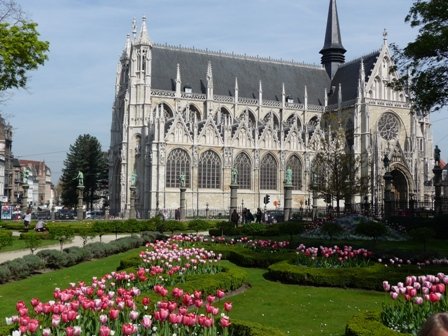 Our interest in the country of Belgium began decades ago, after reading a letter to the editor of a now-defunct travel magazine about what fun a weekend in Brussels can be – a quick non-stop from the east coast of the US. We thought, “Why not?” and planned a long Valentine’s Day weekend trip to the land of chocolate! 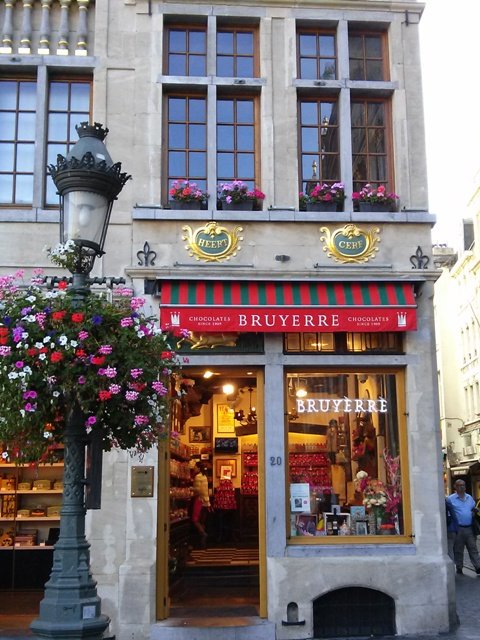 Since that time, it’s become our favorite connection/layover airport on our trips from the US to Europe – an easily navigable airport, a lovely Brussels Air lounge to wait in, and, if we have time, just  20 minutes by train to the city center from the airport.
After including Belgium in our Amsterdam Grachtenfestival summer tour for several years, we now offer the two countries (Belgium and the Netherlands) as one of our customizable Dream Tours.
So what’s the draw of this small country, the HQ of the European Union?
We spend a few days there on our tours, but even with just a few hours, Brussels is worth a stop! It’s an easy walk from Central Station to the historic center, passing through Galerie Royale Saint Hubert, an elegant 19th century arcade filled with inviting cafes ( stop for coffee and pastries in one) and shops. 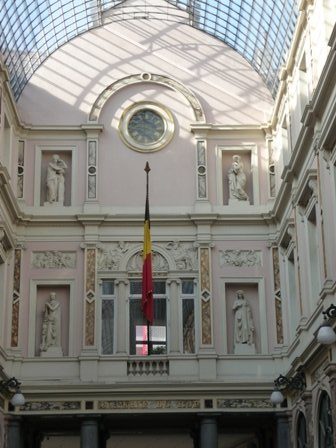 Of course there are chocolate boutiques, ever-present in Belgium, 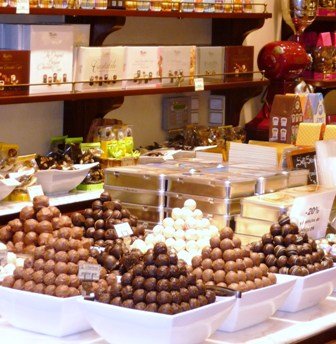 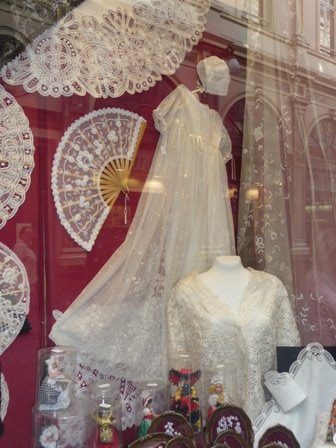 we remember buying a pretty lace-trimmed white dress for grandaughter Cassidy, now 24, when she was one.
It’s almost frightening how time speeds by!
The Grand Place, described by Victor Hugo as Europe’s most beautiful drawing room, is bustling already. 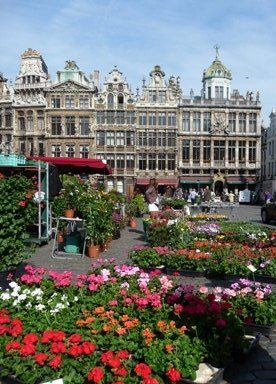 The flower market carpets the cobbled square,and the freshly minted gilding on the ancient buildings just dazzles the eye 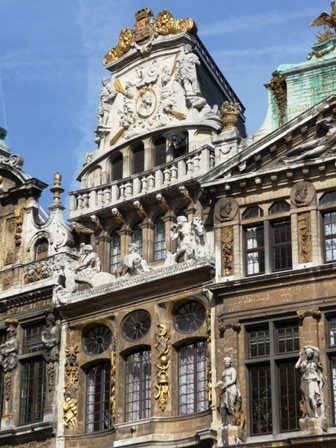 from one end of the square to the other.
It’s Saturday, so the antiques market is set up on Place du Grand Sablon, 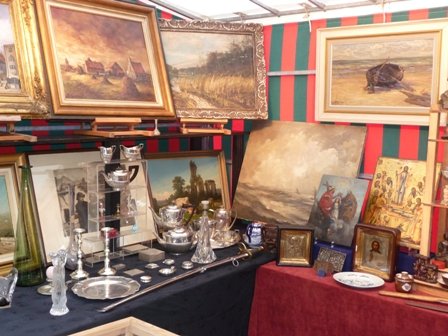 another open-air favorite of ours.
The green and red booths cuddle close to the pretty late- Gothic church 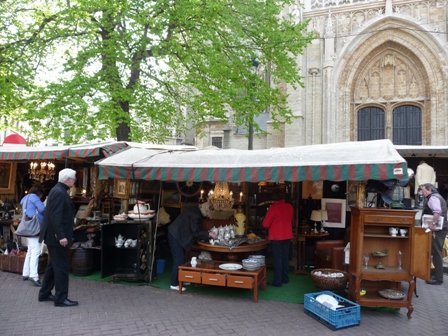 and the savvy vendors discreetly hawk their fine silver, china and art.
Across the street is where we first discovered Pain Quotidien, decades ago. 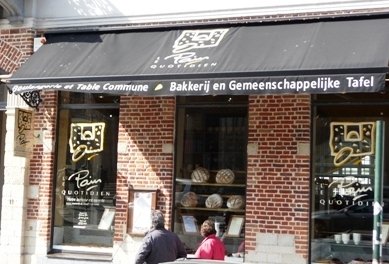 Belgium is where this yummy bakery and cafe started.
Just uphill from the church is the gorgeous Petit Sablon garden,

radiant with tulips on an April morning.The surrounding fence is topped with bronze statues representing the trades of earlier centuries, such as this harvester. 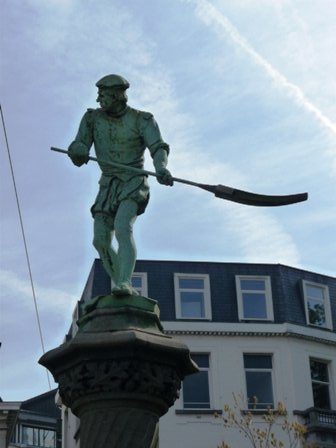 There you have it – a little taste of Brussels! And now for some another Flemish treasure.
The romantic medieval town of Bruges is an easy day trip from Brussels, deserving of a blog post all its own. 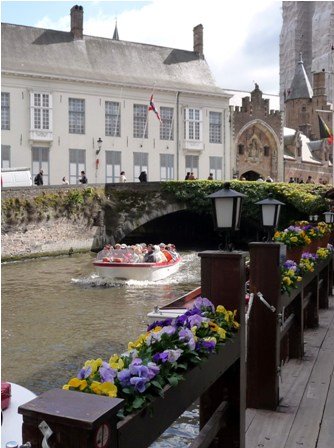 But how about lesser-visited Antwerp, one of our favorites?
The best (and most convenient) introduction to this lesser-known Belgian gem is to arrive at grand old Antwerp Central, a fitting tribute to the glory days when trading ships brought immense riches to the city, making it the wealthiest in Europe in the 1600s. 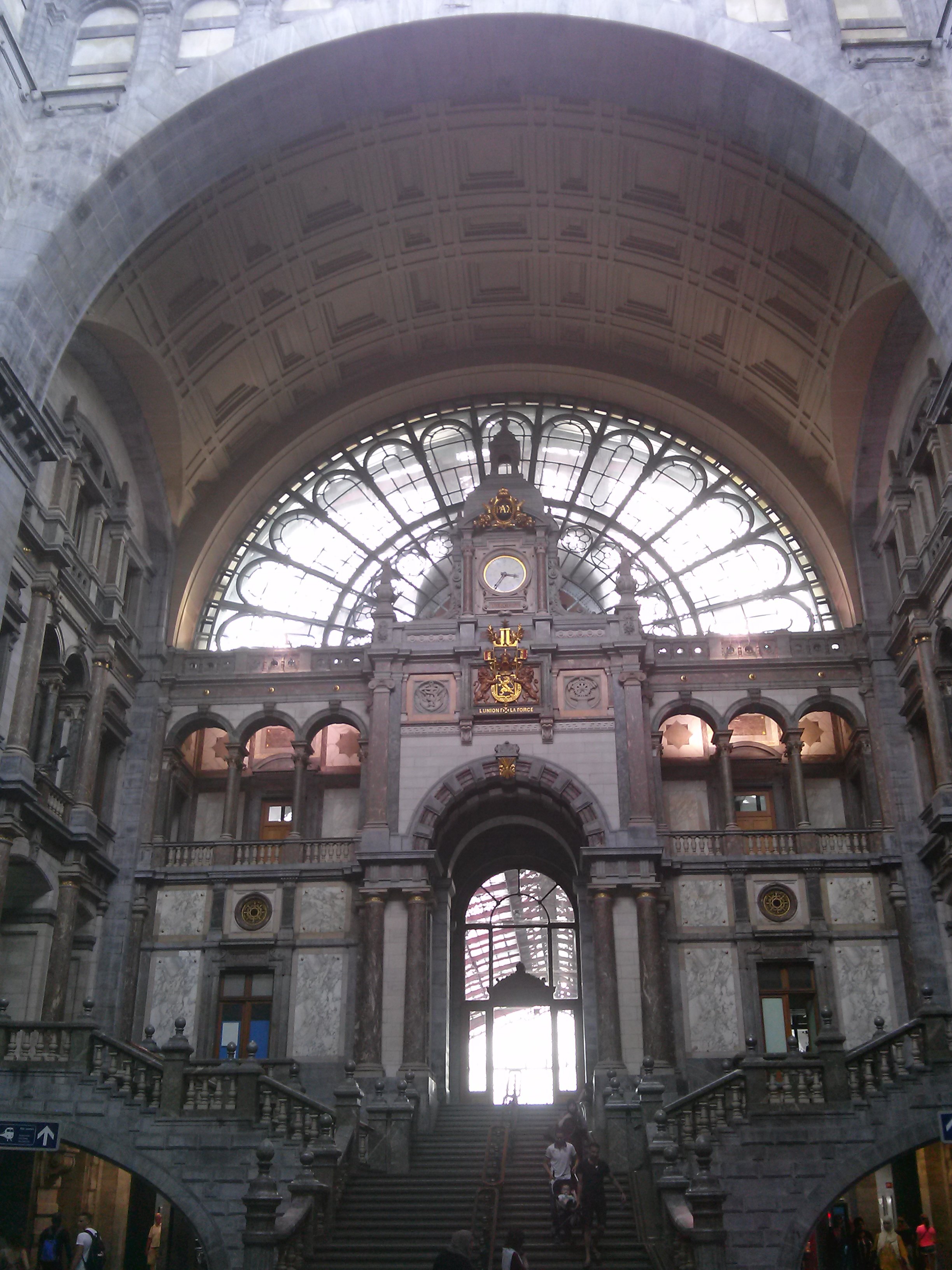 One of the pleasures of Antwerp is how easily accessible the sights are – most within a 30 minute walk of the train station!  A walk down the Meir, Antwerp’s elegant shopping avenue, 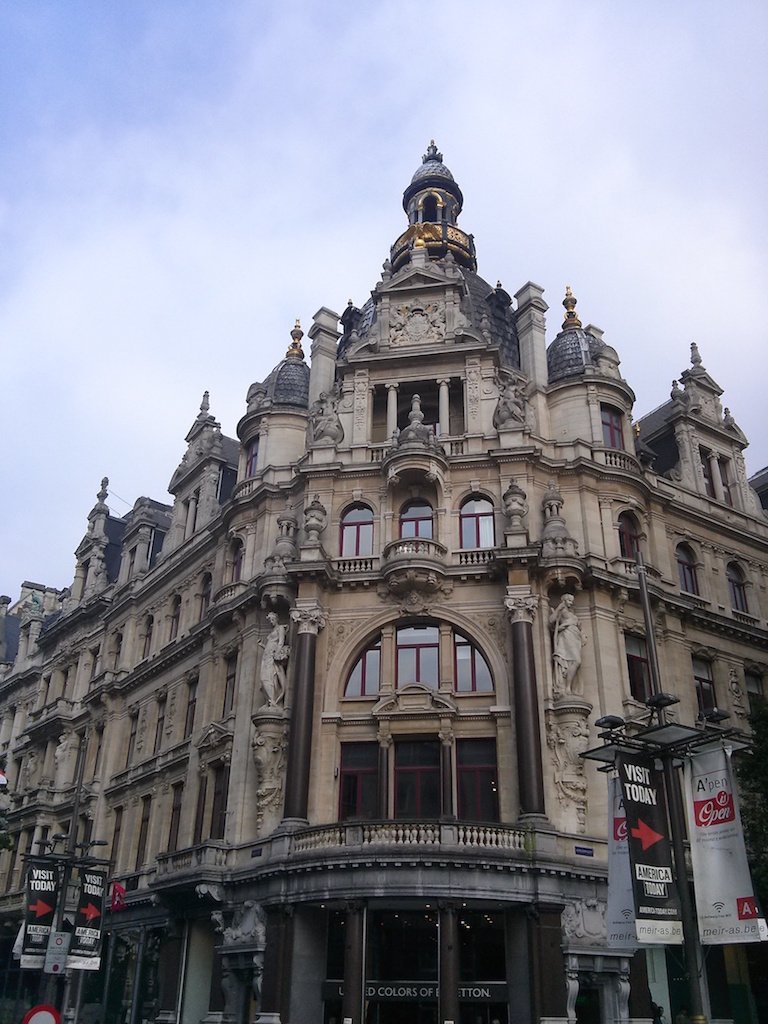 takes us by impressive palaces, now occupied by familiar main street emporiums, such as H & M and Benetton.
Turning left on Wapper, we step back in time a few centuries as we enter Rubens’ home and studio. Rubens acquired the house in the early 1600s and established his living quarters in the left wing – one of his few self portraits hangs in the dining room. 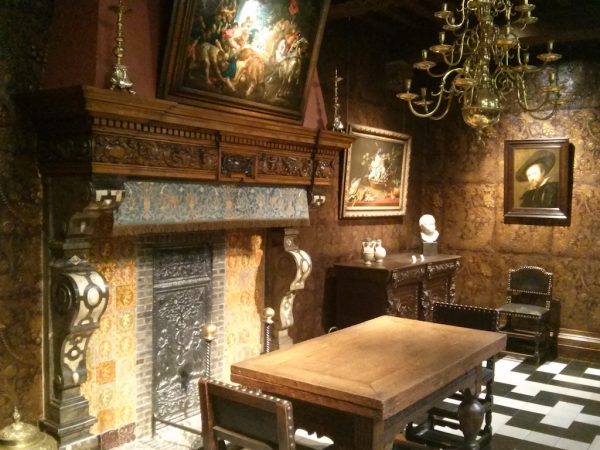 The shorter-than-expected beds, cozy behind curtains, were designed for sitting-up-sleeping, 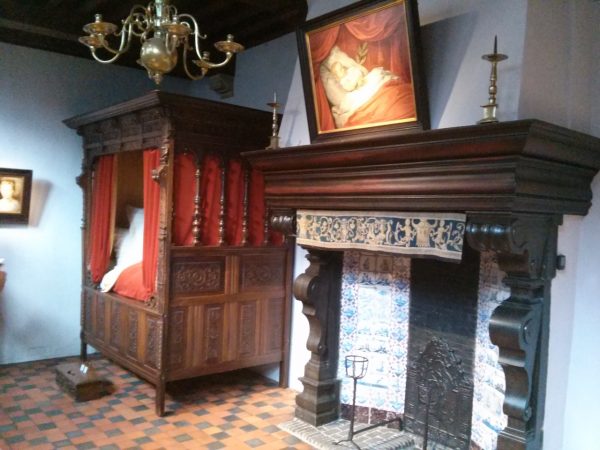 the prescribed healthy way to sleep over 400 years ago.
Rubens added a new Renaissance wing to the right side, housing his studio. The simple brick façade on Wapper hides a glorious work of art in the back, facing the garden. Influenced by his years in Italy, he commissioned this sculpture-dotted courtyard and the loggia which connects the two structures. 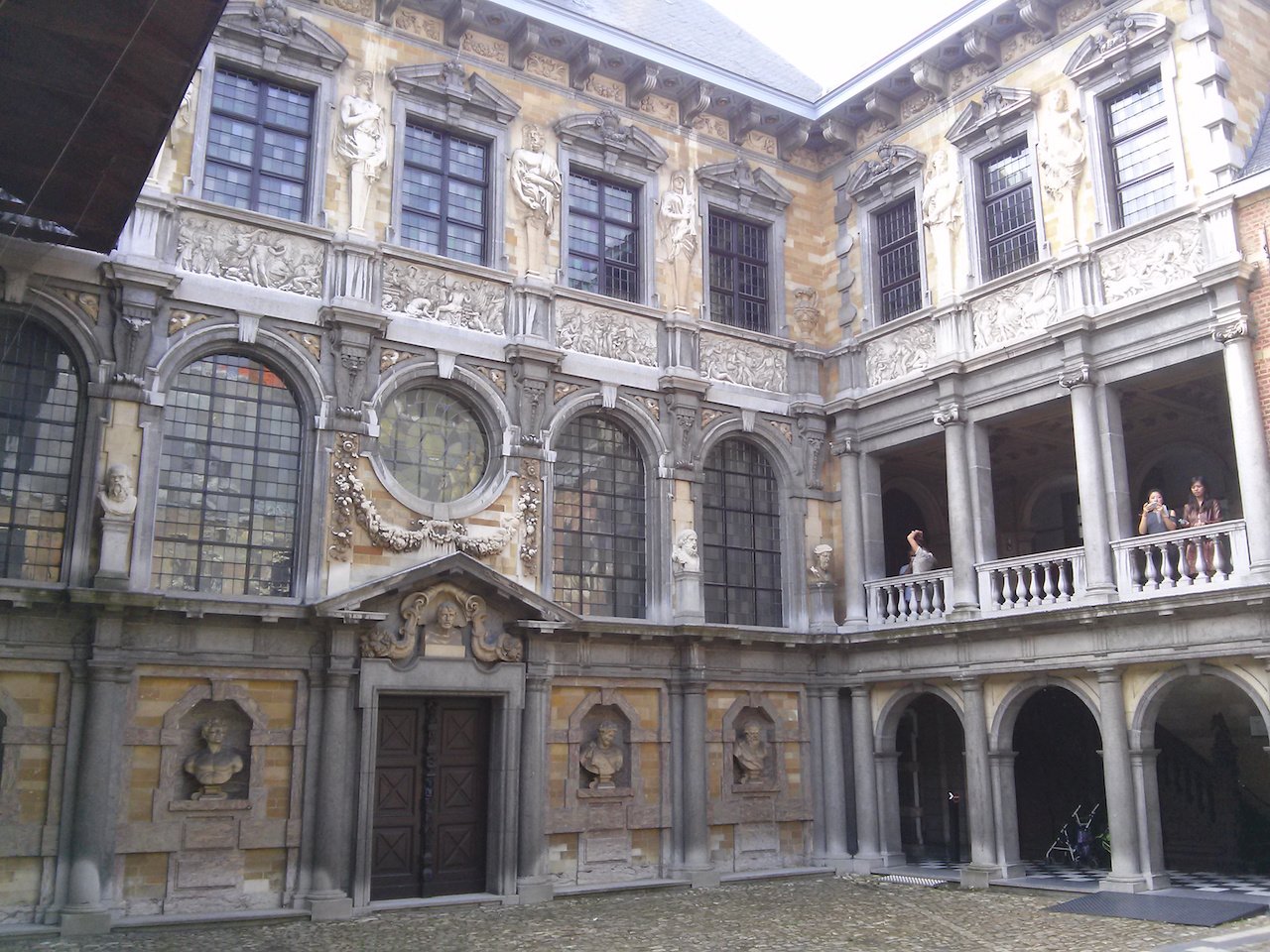 The light-filled studio, now a gallery, is just the kind of museum we most enjoy – intimate and focused. 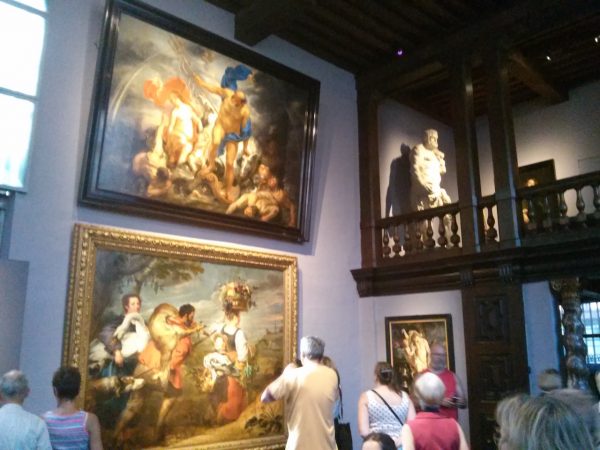 Canvases of Rubens, his studio, and his contemporaries invite a closer look – oh how I love the intricate ruffs of his time! 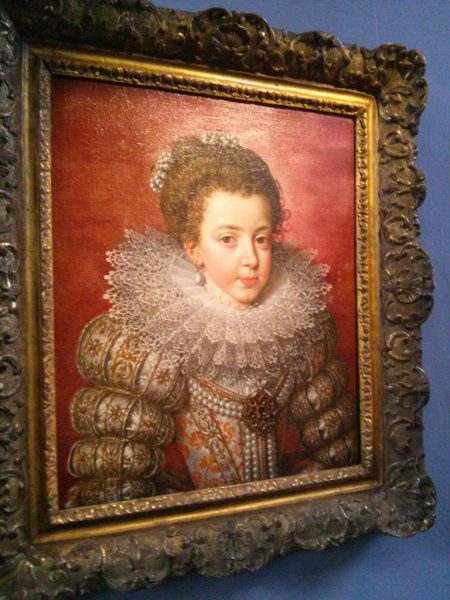 In the linen closet, a room beside the bedroom, the wire frame that enabled these complicated frills to stand is on display – I always wondered how starch could be enough to support those elaborate neckpieces!
I’d love to just sit and enjoy the peaceful beauty of the garden that Rubens depicted in a canvas or two, 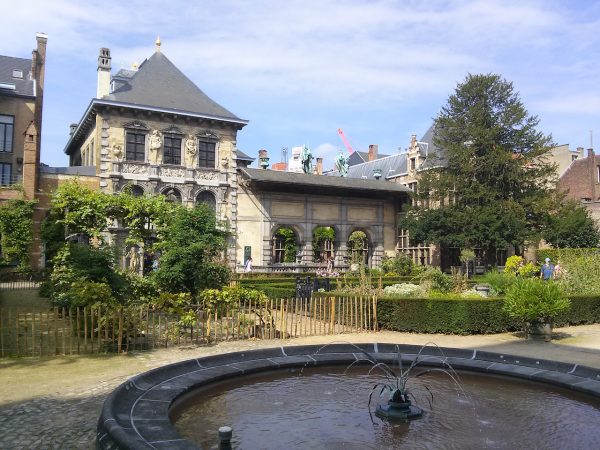 still inviting today …. but it’s time for an iconic Belgian meal.
Which would you choose – ever-popular Mussels and Frites? 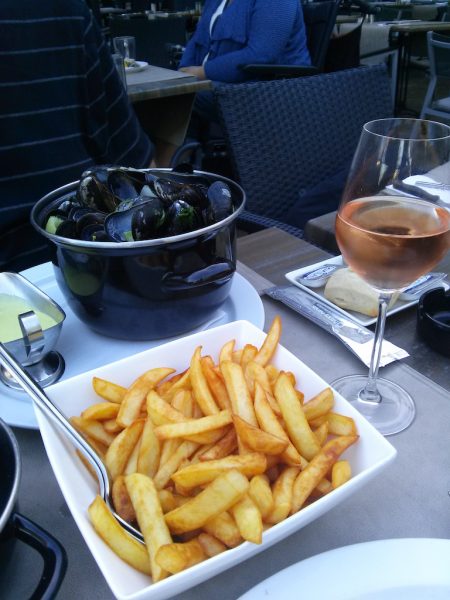 Or this enticing plate of seafood? 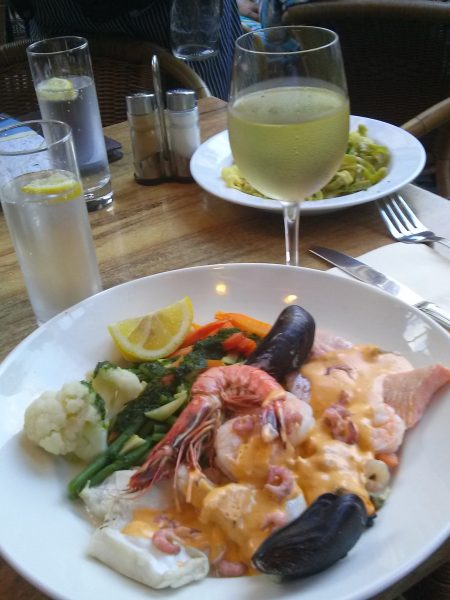 A challenge of a choice!
Keep following the Meir towards the river and you’ll come to Cathedral Square, 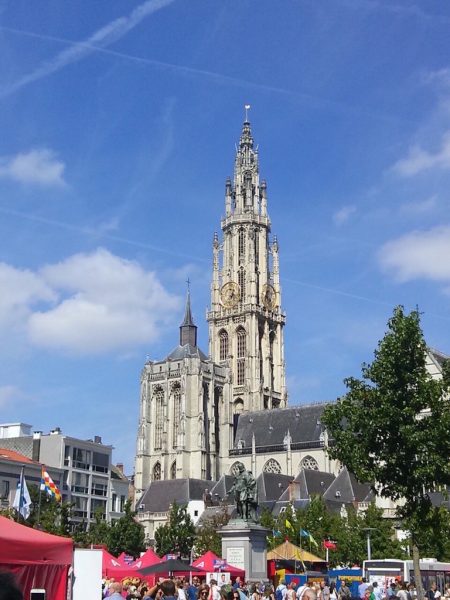 where the spire of Cathedral of Our Lady, still the tallest structure in the city, soars above the bustle of cafe life.
Rubens left his mark, of course, on the richly decorated Cathedral, with not just one, but three huge paintings, such as this Descent from the Cross. 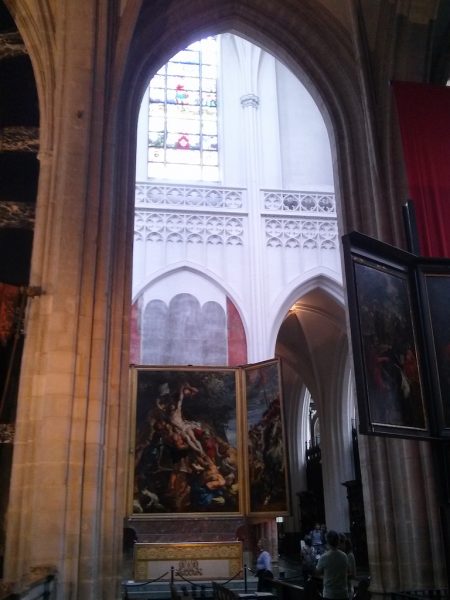 On the other side of the cathedral is the Grote Markt square, with the hand-throwing statue (a rather gruesome Flemish folktale) in the center. 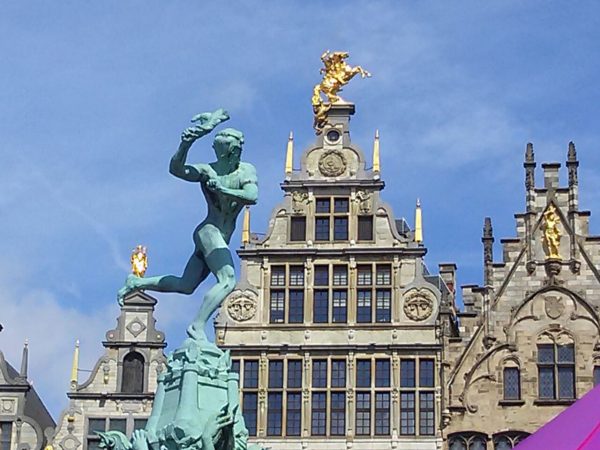 Gilt-topped guild houses surround the square, the golden statues atop celebrating the trade associations of the city’s industries, or their patron saint – such as a sailing ship, a man on a rearing horse, or St. George and the dragon. The stately façade of City Hall dates from Antwerp’s Golden Age 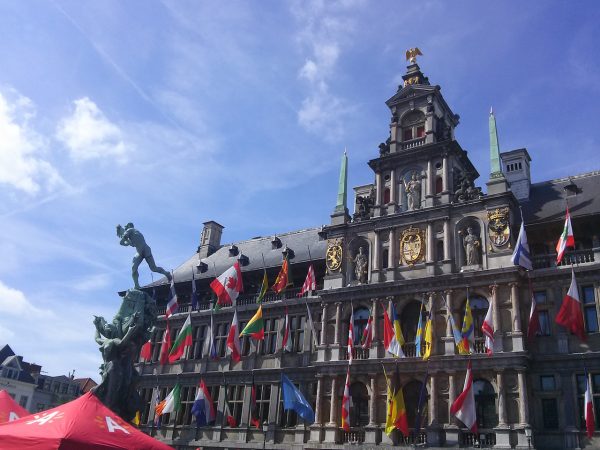 and is adorned with flags from many countries, representing the importance, even then, of international trade to the city.
When in Belgium you MUST…have some chocolate, right? We oblige, with an afternoon snack, 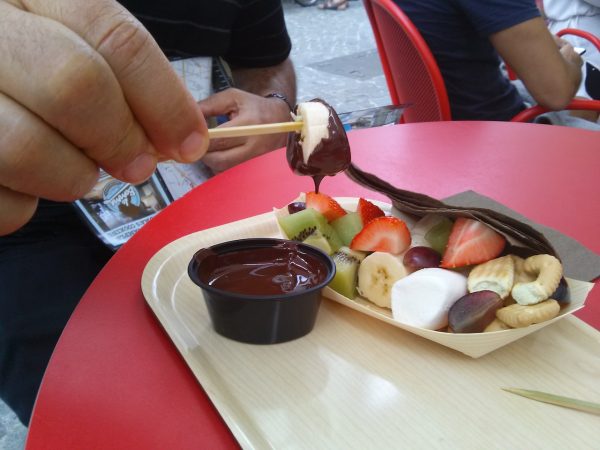 before exploring a smaller square or two 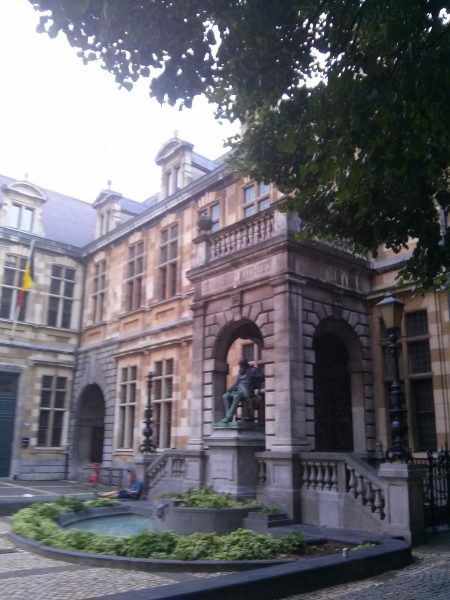 After dark we head back to the shimmering Grote Markt 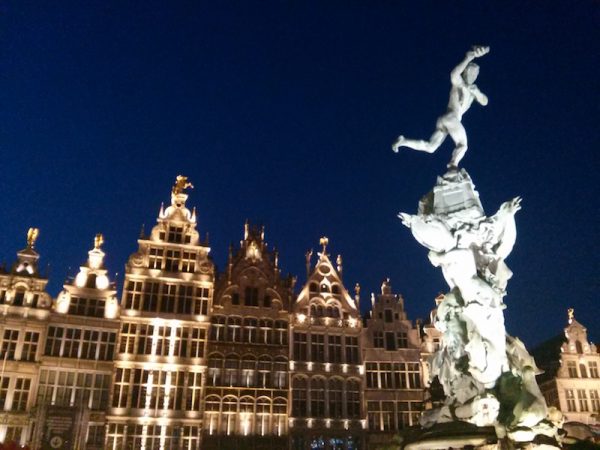 to bid farewell to this gem of Flanders.
So have we influenced you to add Belgium to your must-visit list? Get in touch and we’ll work with you on a customized itinerary to see just what you’d most enjoy!