A vicolo is a very tiny street, no more than what most Americans would consider an alley. Yet, in Italian towns much of the local life can be experienced in these narrow passages. The vicoli often wind like a maze through the most ancient parts of town, forming a web of connections between neighbors and neighborhoods. In medieval times, when these streets were laid out, they needed only to be wide enough for an ox cart to pass. The narrower and more labyrinthian the passage, the easier it was to defend, as a result many vicoli are not wide enough to accommodate even the smallest modern car. The buildings on either side run continuously, a series of attached apartments often three and even four stories tall, the windows of one home directly facing those just across the vico.
I have spent countless hours painting along these narrow vicoli. It is one of my favorite things to do in Italy, not only for the visual complexity that I find so compelling as an artist, but also for the uncensored view of Italian town life. To the background din of plates clattering, frying pans sizzling and toilets flushing, I have heard shrieking arguments that made me afraid that a murder might take place at any minute. I have listened to children being scolded, slapped and then, a few minutes later, praised and loved by their cooing mothers. I have heard passionate love-making in the middle of the day. All of life is played out in an Italian alley. I don’t believe that “What will the neighbors think?” translates well into Italian.
Above all what has impressed me is the pervasive goodness and generosity of the Italian people. On many occasions I have painted directly beside a resident’s front door. I always try to be respectful of their space, but I could easily understand if my presence provoked annoyance or at least raised some suspicion. However, my imposition has not only been tolerated, but I have been greeted with genuine warmth and cordiality. I have been invited in to lunch (which I declined), have been invited in to see the owner’s art collection (which contained both a Picasso and a Kandinsky), been asked if I needed to use the bathroom, been handed a beer, and on one occasion had four coffees in china service brought down on a tray for me and my nearby painting companions.
The following watercolors were all painted along various vicoli in the Umbrian towns of Spoleto, and Spello. Umbria is the location of our 2012 Arts Sojourn. 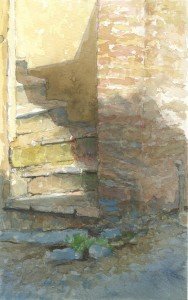 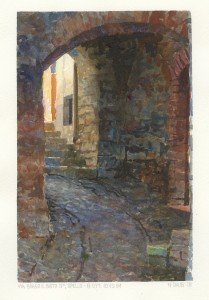 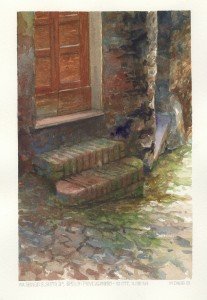 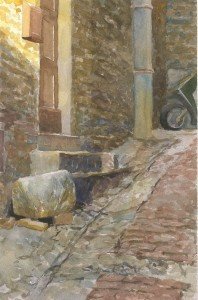 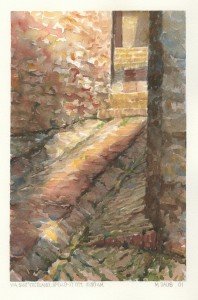