We always enjoy reading the ‘round-robin’ type letters that so many friends and family circulate around with their Christmas greetings, whether by email or post. Everyone is so busy these days, a resumé of the family’s year is a great way to keep in touch.

Since we’ve been running our Caves & Castles Tours, we’ve been privileged to be included in these special communications sent our by new friends we have made and shared special time with here in the Vezere Valley.  It is so gratifying to know that having left us on real high, minds full of inspiration, in awe of all they’ve seen, these feelings last and are pleasurably recalled in festive letters.

Some folk fly in from the States, New Zealand or Australia, just to take a tour with us! Others take a slower route taking in friends and other places they’ve longed to see. Obviously it depends on the time available – the freedom to travel is one of the joys of time not being so heavily committed to work.

This is a edited extract from one of our newly-made friend’s family newsletter and a great example of slow travel weaving one adventure into another!

“In mid September I left for my European adventure, starting with 3 days 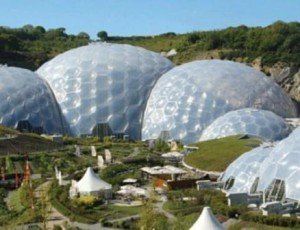 in Cornwall where I had a great time exploring my friend’s studio. She’s a textile artist and  specialises in natural indigo dyeing. I also visited the Eden Project with her (great geodesic domes and multi climate gardens). (Brings back memories, we visited years ago – must ago again! SJB)

Then I went to Wales and first visited the Roman Fort of Isca in Caerleon – it has a wonderful museum with tiles mosaics, glassware and pottery.  Next I went and stayed in a small village, Mumbles, down the coast from Swansea and walked on the coastal path gazing down on beautiful golden sandy beaches. I also did some family history research whilst I was there.

I love travelling by train and both in England and France, loved watching the changing landscape, towns ended, fields with sheep, cattle and crops began. No urban sprawl or mall creep.  I paused overnight in London, took the Eurostar to Paris and then on to Brive la Gaillarde and the Dordogne.

This was the heart of my trip. When I was 19 I saw a print of the ‘Chinese horse’ a beautiful painting in earth colours. I was astounded to learn that it was a prehistoric painting dated 17,000 years ago from a cave in France, la Grotte de Lascaux! I have wanted for years to see these cave paintings. Before leaving home I’d found Caves and Castles online. This is a tour company run by Steve and Judie Burman, an English couple living in a small farming village in the Vezere Valley. I was joining one of their small group Cave Art & CastlesTours. 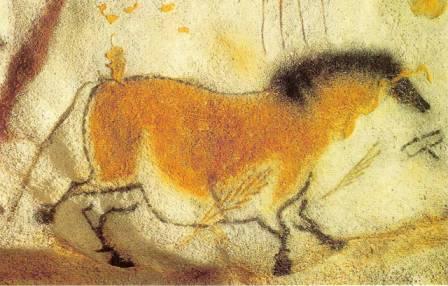 Steve is an archaeologist. He took us out each day for a week to see sites where evidence of both Neanderthal and Cro Magnon peoples was found. The Cro Magnons were fully modern humans and lived as hunter-gatherers in the rock shelters of the limestone cliffs along the Vezere 20,000 years ago. There’s also caves which weren’t lived in, but they often did engravings, drawings and paintings in them.  The majority of the images are of animals: horses which were not yet tamed and seldom hunted, bison, mammoths, woolly rhinos, ibex, aurox bulls and cows, deer,  bears, lions, and a few of reindeer, their main source of food, clothing and tents. I was blown away by the accuracy and obvious respect with which the artists had observed and reproduced these animals

We visited five different caves: Rouffignac, Lascaux II, Cougnac, Les Combrelles and Font de Gaume. Also, a working archaeological site at Abri Pataud, two large  museums  and a small private one at Castel Merle. Steve was an excellent guide and supplemented as well as translated the information given by French guides 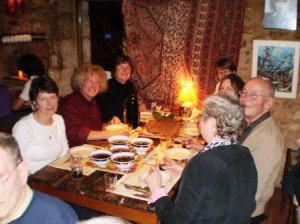 Steve (centre, left) and Judie (back, right) share a meal with new friends at a local auberge

Judie manages the business and fed us very well, both breakfasts and dinners. On two evenings they took us out to restaurants run by friends, one out in the countryside featuring cuisine sauvage. We feasted on excellent wines, local cheeses, and locally grown foods including homemade head cheese and liver pate from a pig they had raised. The dishes were garnished with zinnias and oak leaves from the garden and the mushrooms were freshly picked in the woods.

On our last day Judie and Steve took us back to the train station and saw us off with packed lunches!  Wonderful hosts.

That afternoon I arrived in Paris, checked in to my hotel on the Left Bank 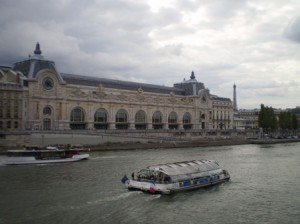 The Musee d'Orsay viewed across the Seine, Paris, France

and went out again immediately.  I caught a bus to the Musee D’Orsay, here were the Impressionists I wanted to see: Van Gogh, Gaugin, Degas, and an Englishman, Alfred Sisley. How refreshing it was to see landscapes and people, light and sky as subjects after the darkness of the caves.  The next day, I walked all over the right bank past Notre Dame Cathedral and the Louvre and went to the Musee des Arts Decoratif  This gallery/museum featured turn of the last century art in all forms: art nouveau, art deco pieces in glass, pottery, ceramics, furniture, draperies, and painted screens. Another section had haute couture of the 70’s and 80’s with videos of runway shows as well as the dresses and suits designed by Dior, Chanel, Yves St. Laurent and others.

After that I walked through public squares filled with families out for the day. There were groups of musicians playing classical and jazz, kids on scooters, in line skaters racing and a great sense of camaraderie wherever I looked. I did some shopping, and found some good food (though not as wonderful as in the south).

The next day I made my way by Metro to the Gare du Nord where I went through customs to leave France then customs to enter England and then on to the Euro Star train back to London.  I caught a train for Cambridge to begin my visit with neighbours from home. Both are historians and with them I was able to tour the grounds of several of the colleges that make up the historic university.

Cambridge has a wonderful museum, the Fitzwilliam. Here I saw an amazing collection of Egyptian grave figures – bird headed women, early bronze age sculptures from  Grecian sites around the Aegean, decorated pottery throughout the ages, and a few more impressionist paintings.

Then it was back to London. We had a visit to the Victoria and Albert Museum where I saw some historic textiles. The next morning, I made my way to Gatwick airport using my Brit Rail pass for the last time (a bargain).  After a nine hour flight, it was great to be greeted by Geoff. After lunch, I started the final leg of my journey home where I received a rapturous welcome from Gemma (our dog) – and Paul too, of course!

What a great slow travel tour! – and whether you have to snatch a week of precious holiday from work or can be more leisurely, perhaps you’ll be one of those people who include us in their festive round-up recalling the awesome art in the prehistoric caves and the lasting effects it had on you. We do hope so. 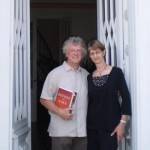 Steve and Judie Burman live in the beautiful Vezere Valley in the Dordogne region of South-West France.  Together they run Caves and Castles, specialising in prehistoric Cave Art and medieval Castles Tours.  Small groups tours (up to six people) are based at their recently converted farmhouse.  Alternatively, they offer non-residential tours for a day or longer.

Professional archaeologist, Steve and his wife Judie love to share their passion for the ‘Cradle of Humanity.’  Its history and culture are awe-inspiring.  The area is also famed for its gastronomy and wine. You won’t be disappointed!