Many will know the name ‘Lascaux’ and realise that this is one of the most stunning cave art sites in the world!  Today we visit Lascaux II – a painstakingly accurate facsimile of the fragile original which was closed in 19 as it was deteriorating as a result of over-visiting.  The problem put simply is that people breathe!  The increase in carbon dioxide upsets the delicate environment of the cave plus the importing of spores and bacteria leads to mould growth which damages the painted surfaces.  Something had to be done, otherwise this world treasure would have been lost.  Fortunately, André Malraux in April 1963 made the bold decision to close the cave.  Then in 1972 the decision was taken to create the walk-through facsimile that we can visit today. Some people are put off by the fact that it is a facsimile and we can understand that.  But we have said and do say “go and see it, you will be a-mazed”. And you know what?  People are – and they’re glad they went. It is so incredibly accurate (within 3 mm of the original) and also replicates the complex cave surface, it’s not just a flat representation.  The cave art is stunning – you can see videos and pictures, but you can’t get the true scale of the art without being there. You are quie simply, in the main part of the cave, reacting to what you see with all you senses – intellectual, physical and aesthetic.

The most famous scene from Lascaux is the ‘Hall of the Bulls’ – it is magnificent with the four giant aurochsen, the largest art forms from the Ice Age – and the Axial Diverticule (which the great prehistorian, Abbé Breuil named the ‘Sistine Chapel of Prehistory’. You just have to see it to really appreciate it.

Add to this the fact that the facsimile, Lascaux II, was produced without the aid of computers and it is truly awesome!

Lascaux Back to Back Bison, known as the ‘Sistine Chapel of Prehistory’

So what about Lascaux III – the travelling exhibition that will be heading to Chicagofor its opening March 2013.  We have seen it in Bordeaux where it is currently showing and have to say we were disappointed!  This is something we’ve reflected on since our visit.  Why is this?  Well, we think first and foremost it is because we have seen Lascaux II.  Not only that, but we have visited Le Thot here in the Vezere Valley where you can see additional scenes from Lascaux and also get an understanding of how the cave art was created – especially if you visit there with Steve.  The technology that has been used to create Le Thot is state of the art and whereas when Lascaux II was produced, the survey involved 1500 measure-ments, all taken manually, this is now done using sophisticated computerised surveying equipment.  This is much quicker and far less labour intensive than traditional surveying methods. Thus Le Thot was created.  The sad thing is a lot of people visit there and think nothing of it!  We have observed people as they walk through the space which is cleverly constructed so that you get the feeling of being in a cave.  They just pass by the masterpieces on the walls not appreciating what is in front of their eyes.  They don’t have any greater understanding of how the cave art was produced, what it was produced with than when they walked in!  The scenes you can see there include the Hand Imprint panel, the Swimming Deer, the Black Cow, the back-to-back Bison (all from the Nave) as well as the Falling Man panel from the Pit. 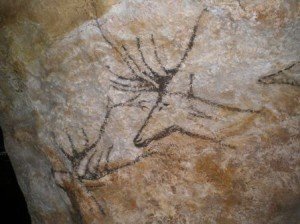 So what of Lascaux 3, the travelling exhibition to be shown at the Field Museum in Chicago.   Basically, it is the scenes you can see at Le Thot, but in Bordeaux, in our opinion, they are not as sympathetically mounted those in the VezereValley.  Intrusive girders support the meticulously reproduced scenes and breaks up the vista.  There is a lot of information available, but again,  in our opinion, it is not accessible enough.  A French friend who visited the Bordeaux exhibition said his experience was spoilt by the positioning of the information panels resulting in limited viewing. In a crowded exhibition space, this is bad news.   I think we were also surprised because there is so little mention of the stunning scenes reproduced in Lascaux II which have to be the ‘crème-de-la-crème’.  Will Chicago visitors really get a true feel ofLascaux? We don’t think so.

But there’s an answer to this – visit the VezereValley!  Even French visitors are knocked out by the beautiful scenery.  Here you can visit Lascaux II and wonder at the scale, complexity and sophistication of the art – you can even forget it is a facsimile as you gaze upwards and around you!  You can visit Le Thot which has similar content, but is far less crowded than Chicago will be and better displayed, in our opinion.   And there are also numerous other incredible cave sites to visit too – and for those with wider interests, there’s over a 1000 chateaux (castles) in the Dordogne– and the food is great! 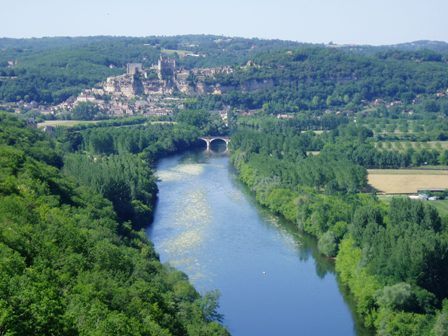 If you visit the Chicago exhibition at the Field Museum, we would be interested to know what you think, so why not drop us an email?  Did it work for you?

One thing this certainly does remind us is how extremely fortunate we are to live and work in the Vezere Valley – come and join us on a Caves & Castles Tour and you’ll find out why!