The latest news on Lascaux 4 is that there has been real progress through the winter and the project seems well on track to open in 12 months’ time.  Foundations have all been laid, walls etc are now shooting up; the whole site is buzzing with workers and materials being delivered.  Three huge cranes that tower over the site look incongruous against the densely wooded Lascaux ridge as a backdrop. 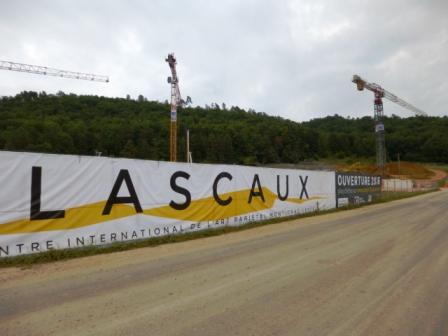 This is the latest major project in prehistory – to build a state-of-the-art facsimile to allow a walk through of the whole of Lascaux plus an exhibition of other rock and cave art from sites in France and around the world.

Designed by Norwegians, the International Rock Art Centre (Lascaux 4) has been funded by local, regional and European grants.  However, the French Government could not spare any money to chip into this very exciting project!

Artists, sculptors and modellers are working flat out to reproduce the cave art. If you have seen Lascaux II and Le Thot in the Vezere Valley or if you have encountered Lascaux 3 on its travels, you will know the breathtaking effect that is being developed.  Though the technology of the measurements and construction is very much 21st century, the paintings are being produced in Montignac using the exact same techniques and materials as the Ice Age artists.  The companies involved are world leaders in this type of work and at least two of them are based in Montignac.

The new centre is being built at the bottom of Lascaux hill in a long, low, very modern building cut into the natural slope.  As far as one can find out – all the artists are meeting their deadlines, with everything looking good for summer 2016.

Work in progress on Lascaux 4 (photo courtesy of Projet Lascaux)

At the same time, 5 hours drive away in the Ardeche the long-awaited facsimile of the Grotto de Chauvet is in the final approach to its launch at the end of April this year. This cave was discovered by 3 cavers late in 1994. It pushed back the dating of cave art to a staggering 34-36,000 years ago – the painters had very conveniently drawn many of the pictures in charcoal, gathered from fires in the cave, only a few metres away.  So direct dating of the art was possible using Carbon Dating which measures the radioactive decay of C14. Some of you may have seen Werner Herzog’s staggering film ‘The Cave of Forgotten Dreams’.  In 2D it’s amazing; in 3D it takes your breath away. It is another treasure house of Ice Age art and is twice as old as Lascaux.

Something like 1000 drawings/paintings and engravings have been found so far at Chauvet. The bestiary displayed is also wildly different from the Perigord caves – for example the list includes 80 felines, mostly cave lions, 79 mammoths, 72 woolly rhinos all the way down to 2 musk ox and 1 eagle owl. There are negative and positive hand prints, vulvas and above all, cave bears. Apart from 19 pictures, 4000 cave bears bones have been recovered, including some 40 skulls.

Very quickly it was announced that the public would never be allowed into the original cave to avoid another Lascaux ‘disaster’.  The facsimile is being constructed using ideas developed for Lascaux 3. Some of the numbers are boggling – 16 billion digital survey points to reconstruct the cave; Lascaux 2 had 1500 ‘spots’ measured  40 pre-digital years ago to guide the builders of the steel framework.

It is exciting times for the prehistoric art world – and us.  We have tickets for the long awaited opening day of Chauvet 2 on 25th April!  We are expecting to be seriously ‘blown away’ and will let you know what we think in our next blog – so watch this space…..