You don’t have to loiter long in a bar in Italy in a small town or village to hear evidence of campanilismo. It’s part of the Italian nature to be convinced that the customs, food, landscape and architecture in the shadow of his or her campanile is best and, furthermore, that the people of the next town are stupid, stingy, lazy, rogues or worse. This is nowhere better demonstrated than in the case of cacciucco (pronounced catch-chooc-co). Cacciucco is a typical Mediterranean fish stew and is the cause of much playful, sometimes acrimonious, banter between the towns of Livorno and Viareggio, on the coast of Tuscany. As Emiliana Lucchesi puts it: ‘There is as much discussion about the “citizenship” of cacciucco as about the sex of angels’ (Cucina di Lucchesia e Versilia). 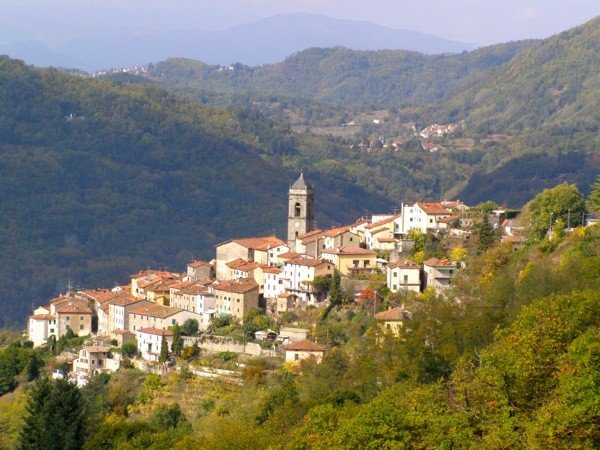 She says ‘it seems documented that cacciucco “is” Livornese’, but as if ‘seems’ and ‘documented’ weren’t contradictory enough, she puts the correct subjunctive form of ‘is’ (sia) in quotation marks. The subjunctive is the tense of doubt; it must follow ‘seems’ because ‘seems‘ means you don’t know.  So why the quotation marks? Is she trying to provoke the Livornese or pacify the Viareggians? The Italian language is rich with innuendo. I don’t know how we would we would sit on the fence so succinctly in English. Even though she was born in Viareggio, she refrains from using the subjunctive when giving the Livornese credit for codifying and publicising the dish. 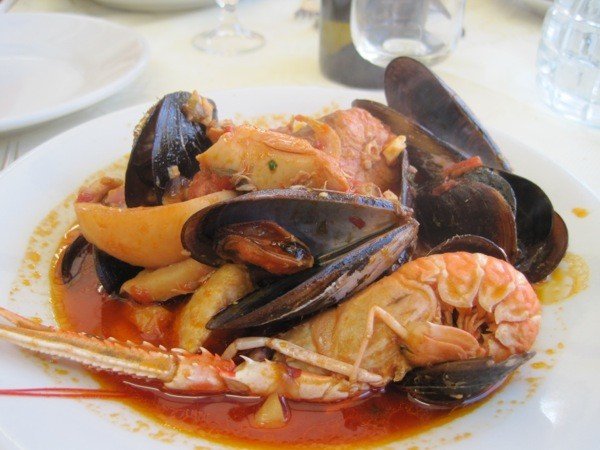 It’s a different matter for the Livornese. Several families from my village in the mountains emigrated to Livorno, and come back often for weekends and an extended stint in summer. They give no quarter to the notion that Viareggio could possibly be the true owner of the dish. They’ve volunteered to prepare a cacciucco dinner for the village and have published their manifesto on the noticeboard in the main piazza: ‘Woe betide anyone who says there’s a version of caciucco in Viareggio!’ 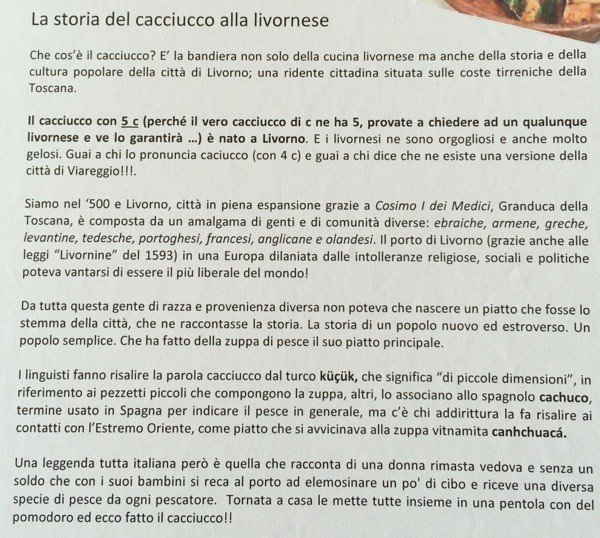 Manifesto of the cacciucco of Livorno

If we’re especially alert, this teaches us something about the Italian language: the doppia. In the final sentence of the last paragraph, count the number of c’s in the name of the stew and then the number in the previous sentence.

As a general rule in Italian you pronounce every letter, including double consonants. A foreigner attempting to speak Italian needs to beware, since if you pronounce only one of a double consonant, the meaning of a word can change substantially, frequently to a word with a lewd connotation. There are however a few towns where they don’t say the doppia, and Viareggio is one of them. If you don’t pronounce the first double ‘c’, you’ll be tarred with the Viareggio brush. (Why the Livornese believe their enemies can pronounce the second doppia escapes me; perhaps all manifestoes are flawed.)

History is often encapsulated in legend, which people I know continue to recount. According to one legend, a poor widow of Livorno, with only a crust of bread and not a penny to buy food for her children, went to the port to beg and was given a different fish by each fisherman. Returning home, she put them altogether in a huge pot of water, tossed in the stale bread and cacciucco was born! 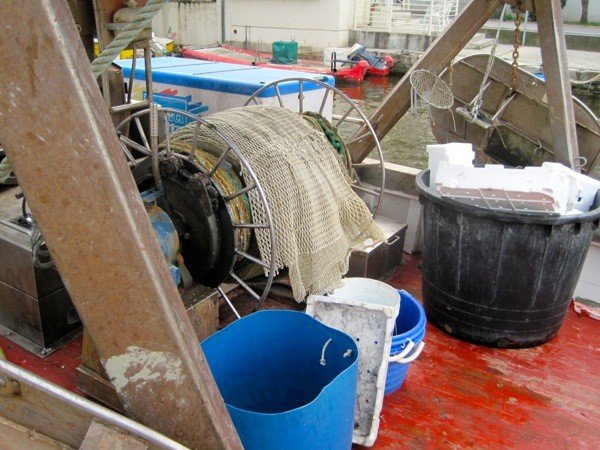 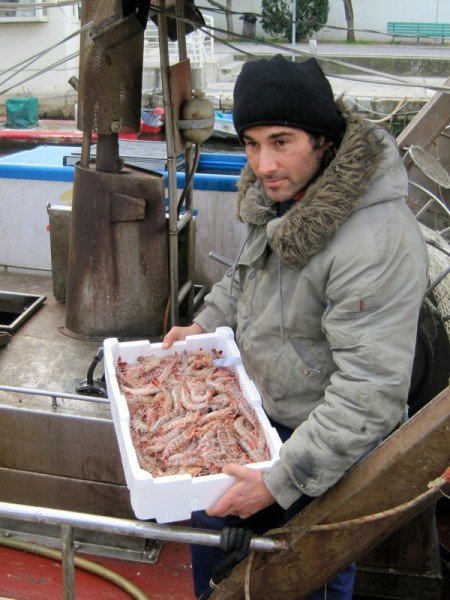 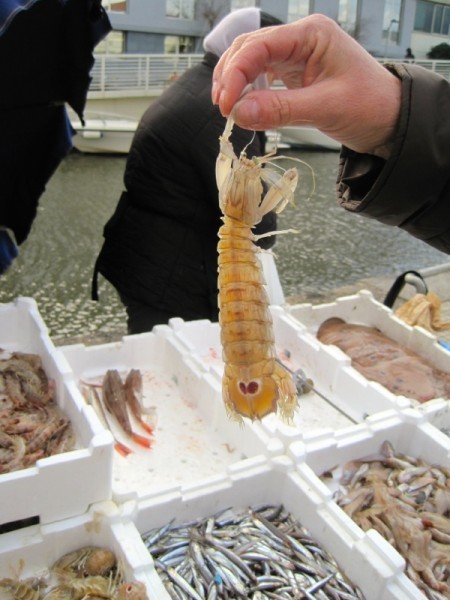 One mantis shrimp on offer

To this day the stew is composed of pesce povero, the leftovers from the catch which fishermen can’t sell to restaurants and supermarkets. They’re often small and bony or look unappetising and have colourful names, like scorfano (scorpion fish), gallinella (means ‘little hen’ and is a gurnard), pesce prete (means ‘priest fish’ and is an Atlantic stargazer), tracina (lesser weever), grongo (Conger eel) and palombo (common smooth-hound shark). It’s hard to believe that tomatoes only came into widespread use in Italian cuisine in the 19th century and are highly unlikely to have formed part of the orignal recipe, but now tomato paste is considered an essential ingredient, as is peperoncino (chili pepper). 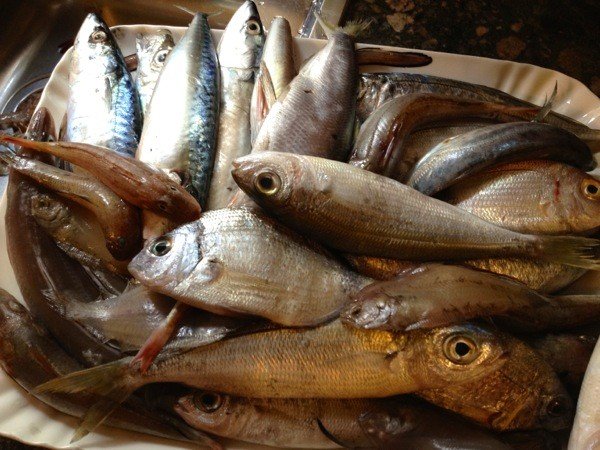 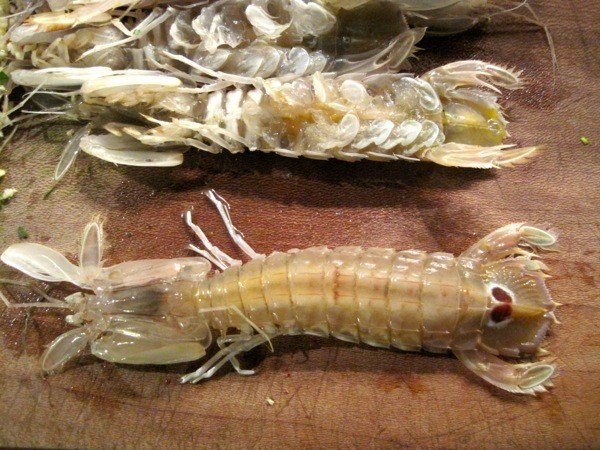 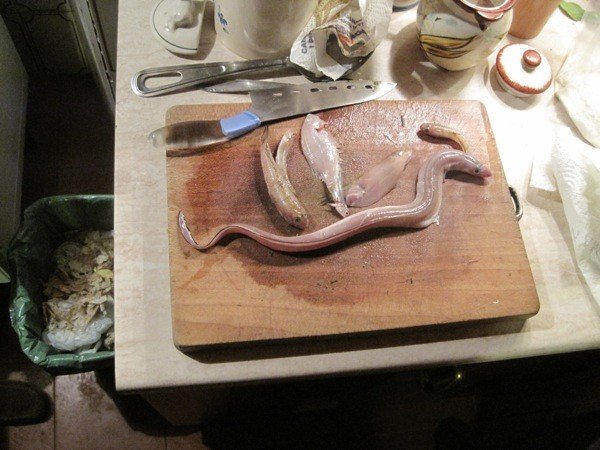 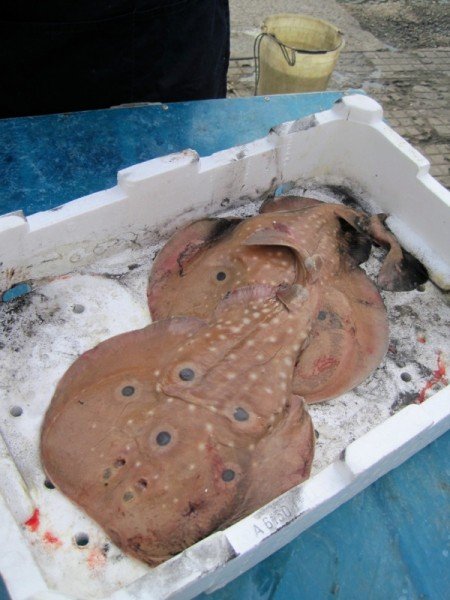 There’s another linguistic lesson we can learn: cacciucco belongs to the category of dishes called zuppa. English speakers immediately think ‘soup’, but zuppa is a special type of minestra (soup) which contains slices of stale bread. And here is a lesson in history and culture: in the waste-not, want-not peasant economy of the past, there were many ingenious ways of dressing up stale bread with simple sauces (think of crostini) and seasoned liquids (better known than cacciucco is ribollito).

The word zuppa arose somewhere between the 14th and 16th century from the Gothic suppa meaning a slice of bread immersed in liquid. Our Livornesi tracked down the origins of cacciucco to 16th-century Livorno when the port was expanding under the rule of Cosimo I de’ Medici, Grand Duke of Tuscany. The population consisted of a gallimaufry of peoples from around the Mediterranean basin, and speculation over the origins of the name range from Spanish to Vietnamese. According to Emiliana Lucchesi, there is no dish like cacciucco for revealing the characteristics of a people: both are colourful, piccante and humble. 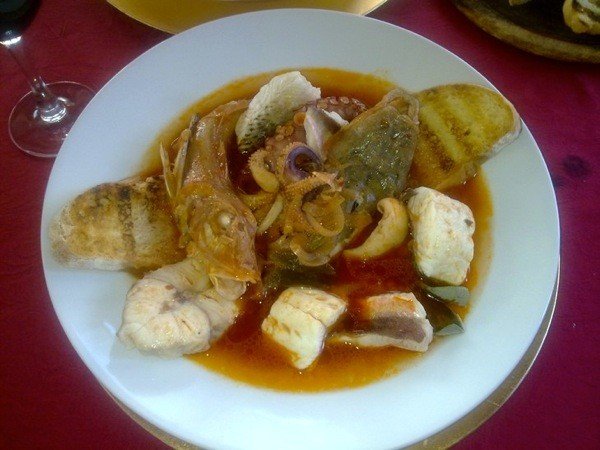 The one and only cacciucco alla livornese (photo: Associazione Cacciucco Livorno)

She traces its arrival in Viareggio to the Viareggian artist Lorenzo Viani, who tasted it in 1936 at a grand cacciucco banquet organised in Livorno by Costanzo Ciano. After much broadcasting and flag-waving on the part of Viani, it became a must at the trattorias of Viareggio frequented by artists and intellectuals. How many Italian artists, musicians and intellectuals have helped diffuse and popularise Italian cuisine! Rossini and Puccini for a start. 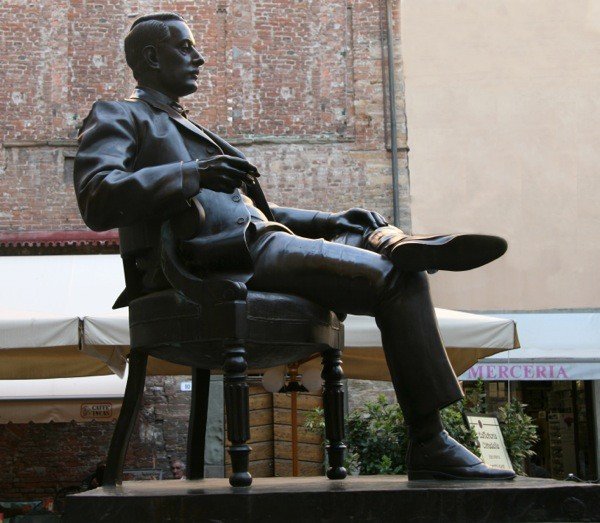 Who would have thought a fish stew had so much to offer. And you haven’t even tasted it yet. I’ve only been to Livorno once and I’m sure if I went and hung out in one of the bars, I’d come back with even more cacciucco teachings. There’s a great satisfaction to be gained from staying in one place long enough to plumb the depths of its history and culture. Or, if you don’t have all year, take a week and go with a guide steeped in the knowledge. Sapori e Saperi organises fishing excursions with a fisherman who only catches fish in abundant supply, and cooking lessons learning the traditional seafood recipes of (oh horrors) Viareggio.