The Italy of Sofia Loren

Earlier this year, we researched Naples, Procida and the amazing Amalfi Coast so that we can offer these locations on a new Romantic Amalfi Coast & Bay of Naples Photo Tour. And here is what we’ve discovered.

We started our exploration in Naples, curious what to expect after reading mixed reviews about this big city in the south of Italy. If you only spend a short time in the wrong part of town (mostly the area near the harbor), you will not like this city — guaranteed. But after navigating all kinds of unappetizing matter on the grimy streets of the harbor district for one day, we dove deeper and fell completely in love. Naples is filled with centuries of incredible art and architecture, has mouthwatering street food at every corner in the center of town, is known for the best coffee in Italy and is, in our humble opinion, inhabited by the consistently nicest and most laid-back locals in all of Europe.

For photographers, Naples is absolutely intriguing with its glorious churches, monasteries, cathedrals and stunning  views over the Mediterranean Sea and mysterious Mount Vesuvius. Even the modern underground stations are incredibly photogenic.

For a less photography-focused visit, we recommend that you follow travel guru Rick Steves’ walking tours. You can even download them to your mobile for free. 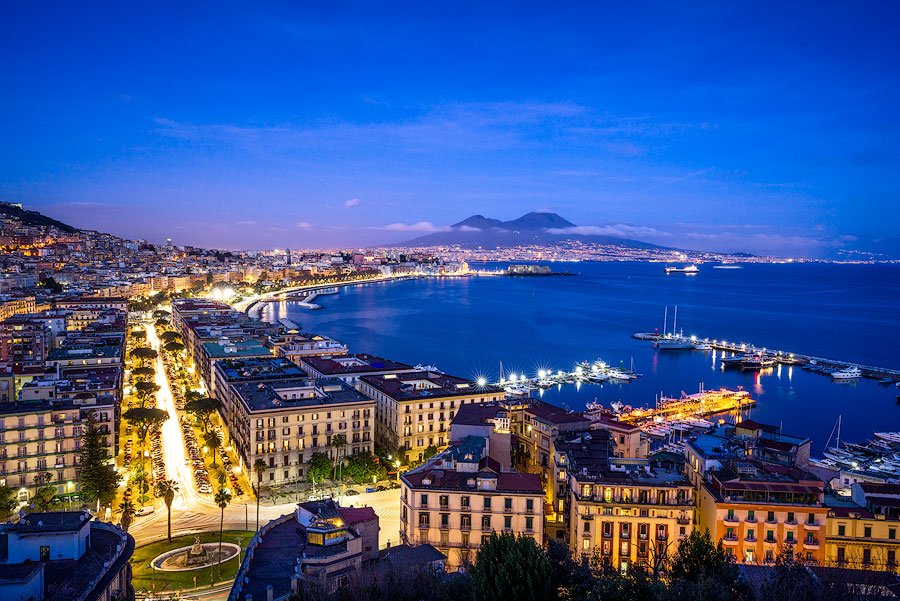 Naples, Italy, at night with Mount Vesuvius in the background 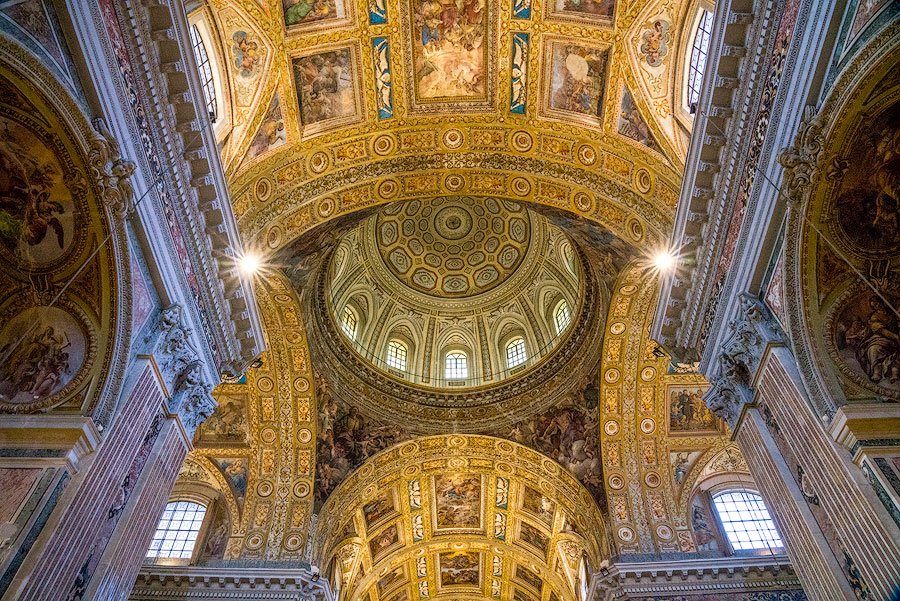 The glorious interior of Gesu Nuova in Naples, Italy 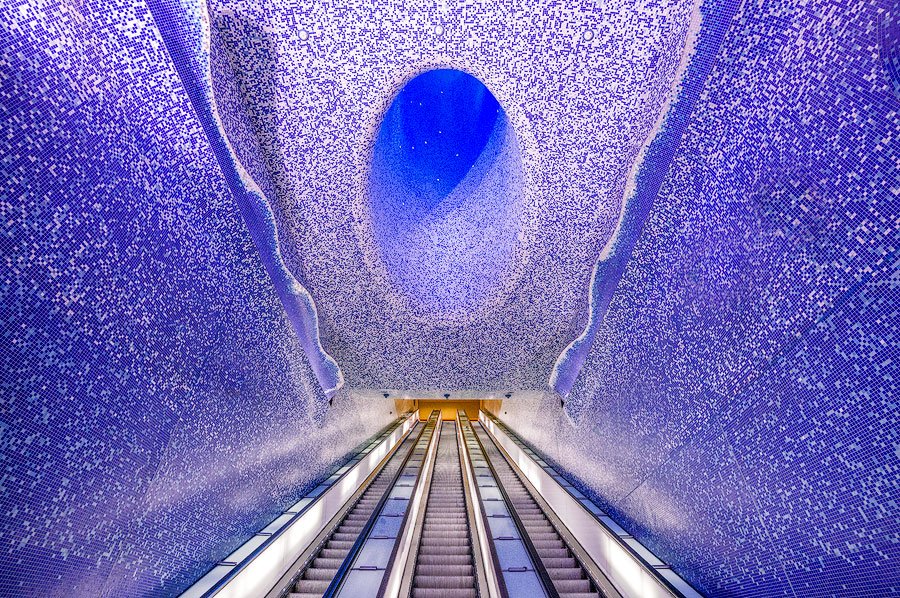 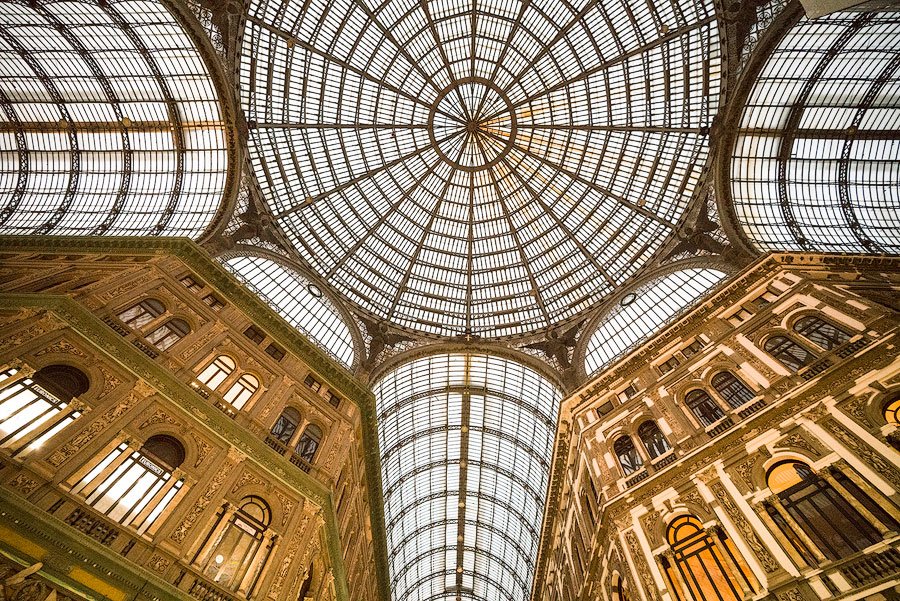 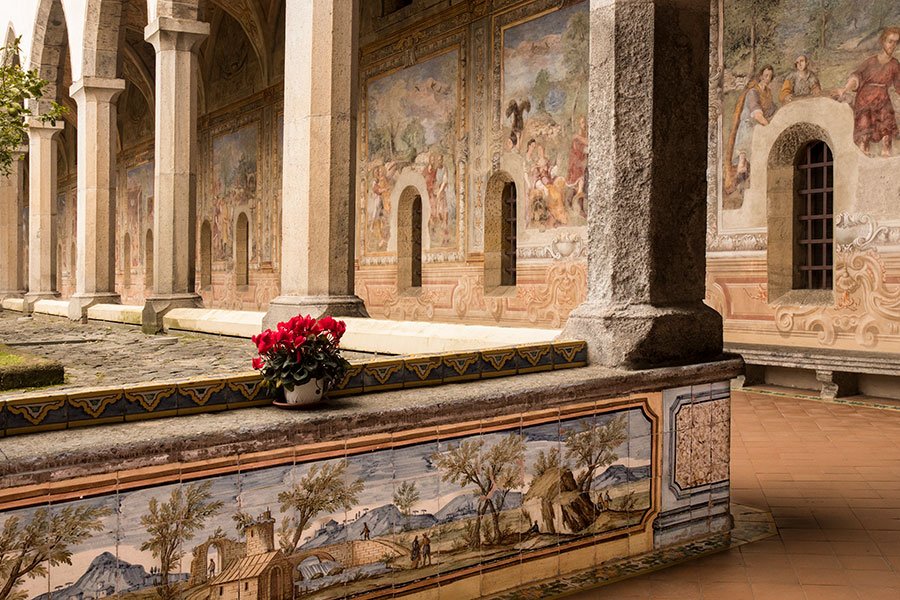 The tiled cloister in the Santa Chiara Monastery in Naples, Italy

After several days of shooting (and eating) in Naples, we took the ferry to the small island of Procida. It takes approximately one hour to get to this undiscovered gem, where you feel time has stood still and you’re transported back to the 1950s. Unlike its close-by sisters Ischia and the glamorous Capri, Procida is not gentrified and gets a fraction of the tourist traffic while being just as intriguing (if not more so), colorful and photogenic. The charming movie “Il Postino” (The Postman) was filmed there 24 years ago and it hasn’t changed since. Get the movie from your local library and then visit Procida and it’s colorful back alleys and stunning viewpoints. 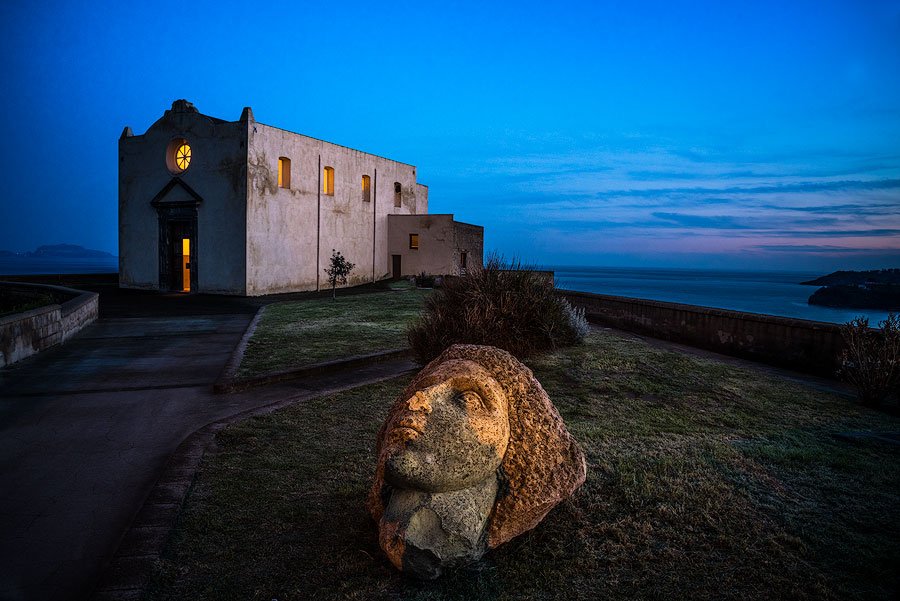 The chapel of Santa Margherita Nuova on the island of Procida, Italy 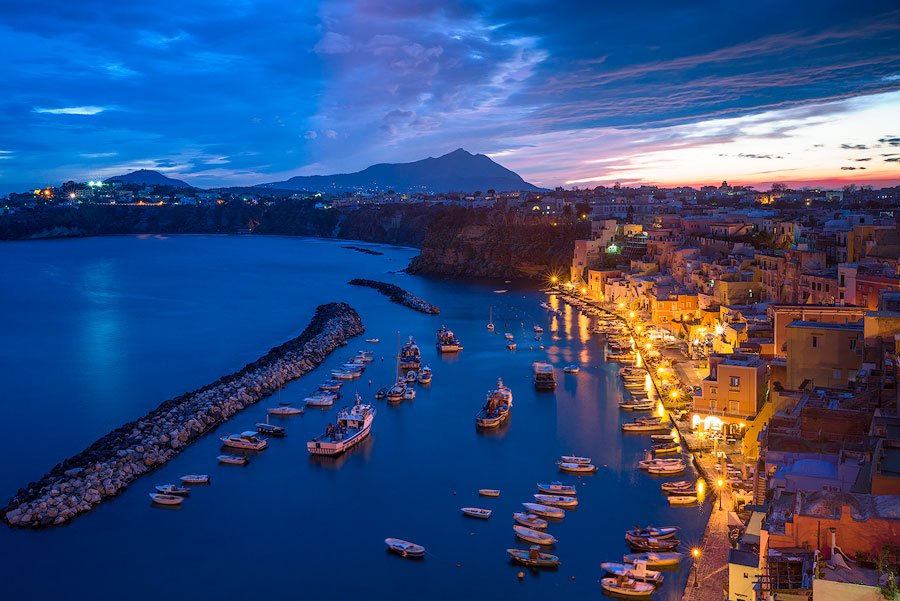 View of the harbor on Procida, Italy, at night 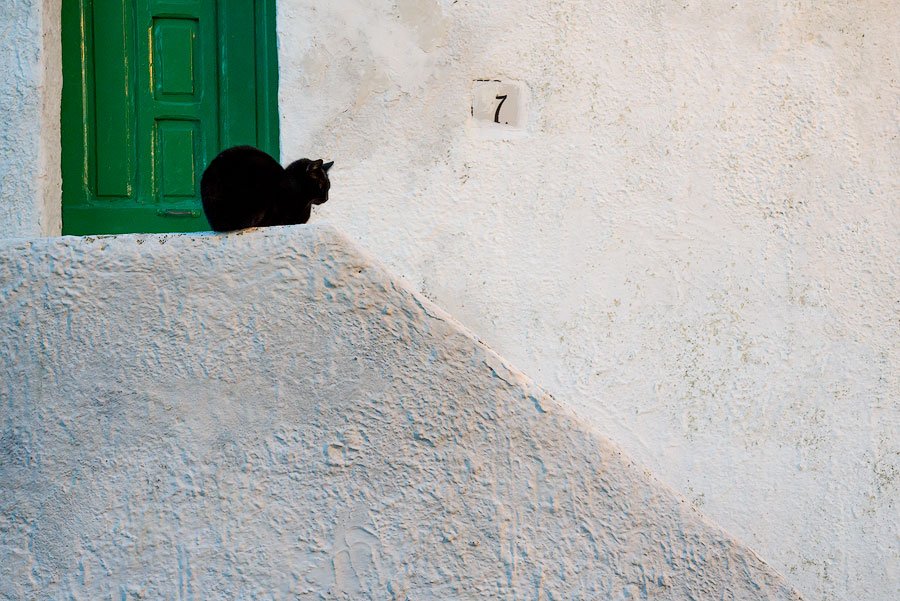 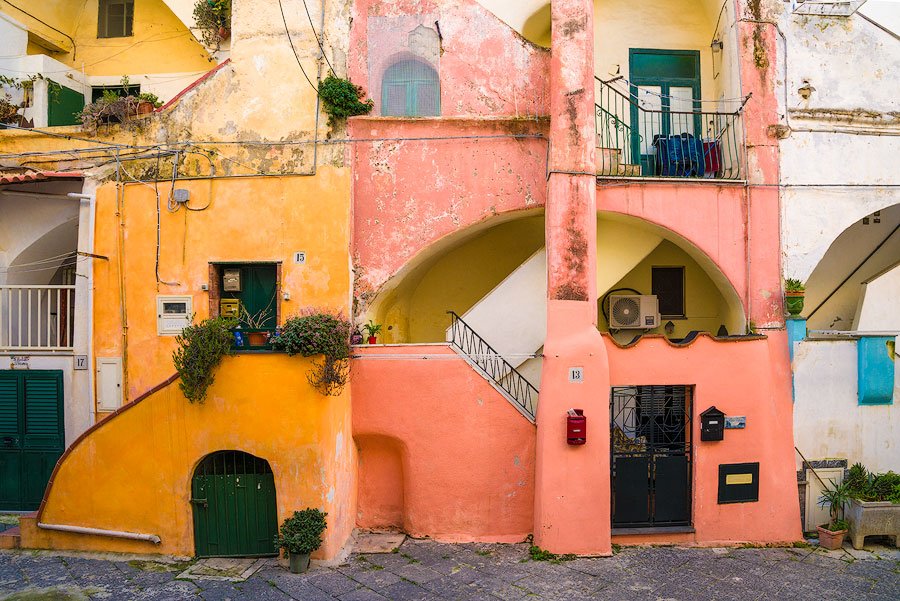 The colorful courtyard of Casale Vascello on Procida, Italy 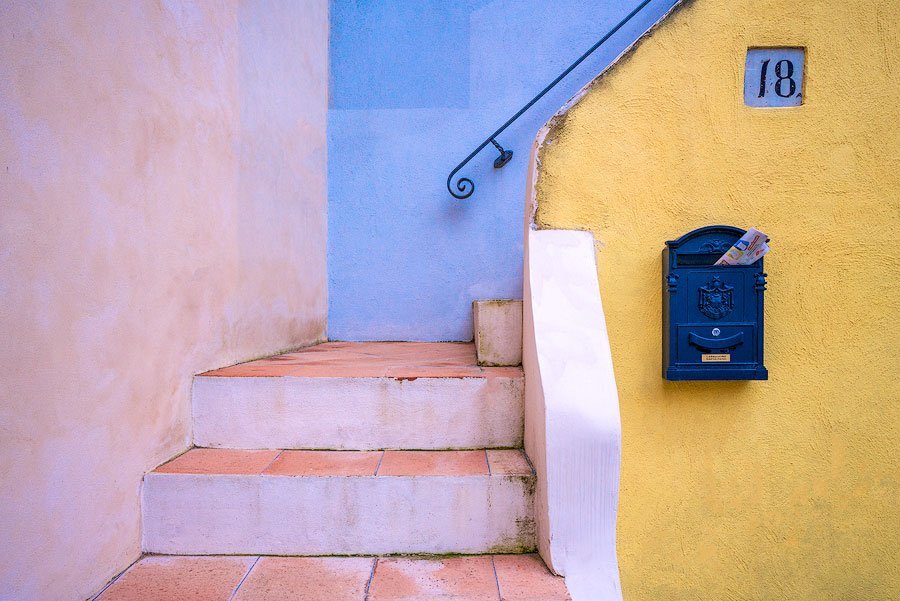 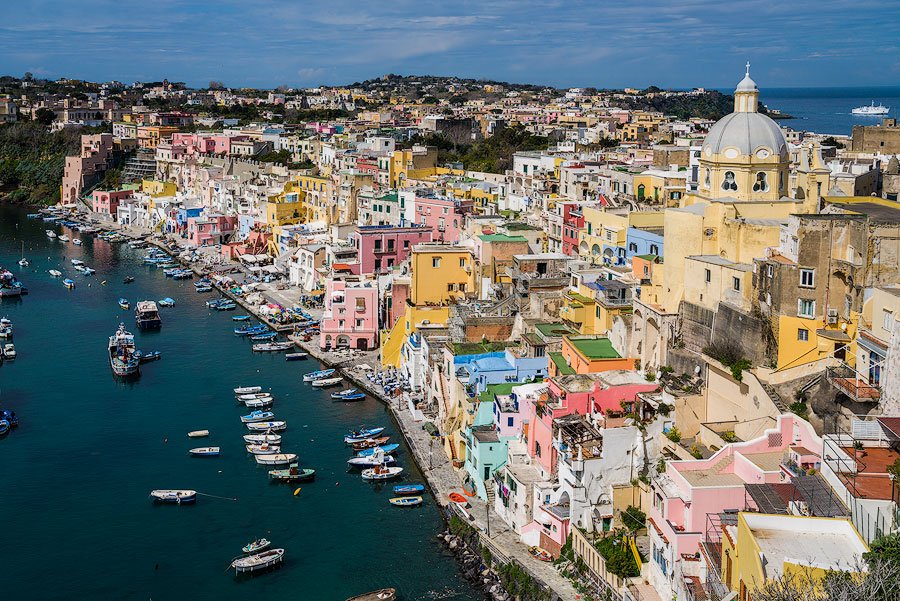 Colorful houses in the Marina Corricella on Procida, Italy 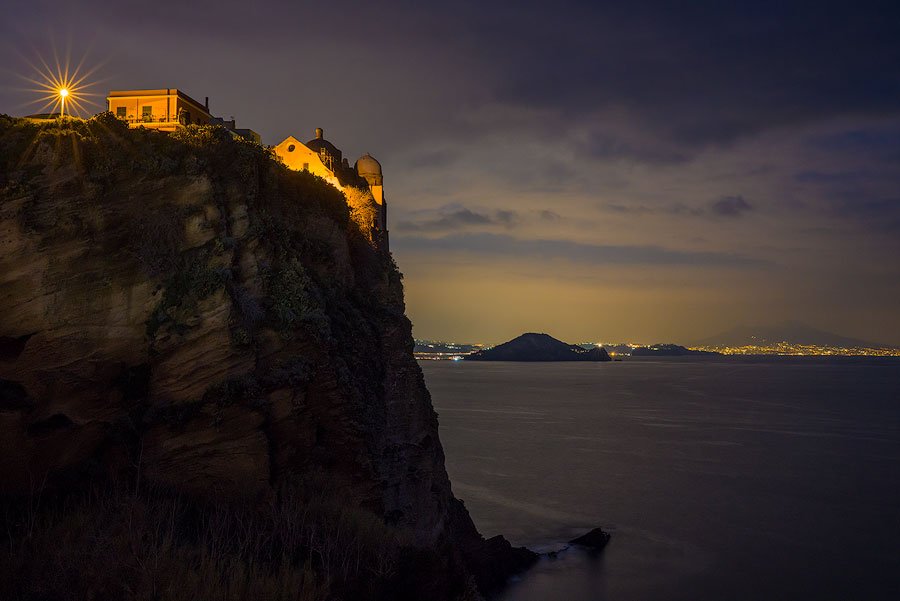 From Procida we returned to Naples, rented a car and braved the insanely curvy roads of the magnificent Amalfi Coast, a 50-kilometer stretch of coastline in Italy’s Campania region. What seemed like an acrobatic impossibility at first (think one-lane blind hairpin curves and many of those), soon became quite manageable. For the most part, people drive fast but carefully.

The Amalfi Coast is to this day a popular vacation destination with its sheer cliffs, rugged shoreline and pastel-colored fishing villages. The coastal road between Salerno and Sorrento winds past grand villas, terraced vineyards and miles of lemon groves.

The stars of the 20th century adored the beauty of the Amalfi Coast. Richard Wagner, John Huston, Humphrey Bogart, Gina Lollobrigida, Sofia Loren (who used to own a white mansion up in the mountains), Truman Capote, Greta Garbo and Robert Capa all vacationed here, especially in the glamorous hill town of Ravello.

The towns of Amalfi, Positano and elegant Ravello way up in the mountains were the places we found most interesting to photograph and we’re looking forward to sharing iconic scenes as well as hidden gems with our participants at our Romantic Amalfi Coast & Bay of Naples Photo Tour in April of 2019. 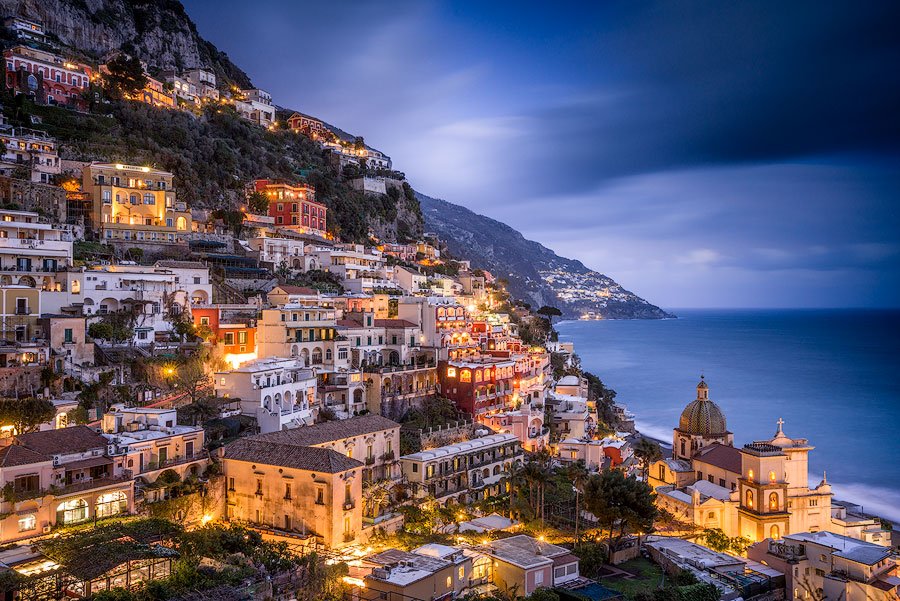 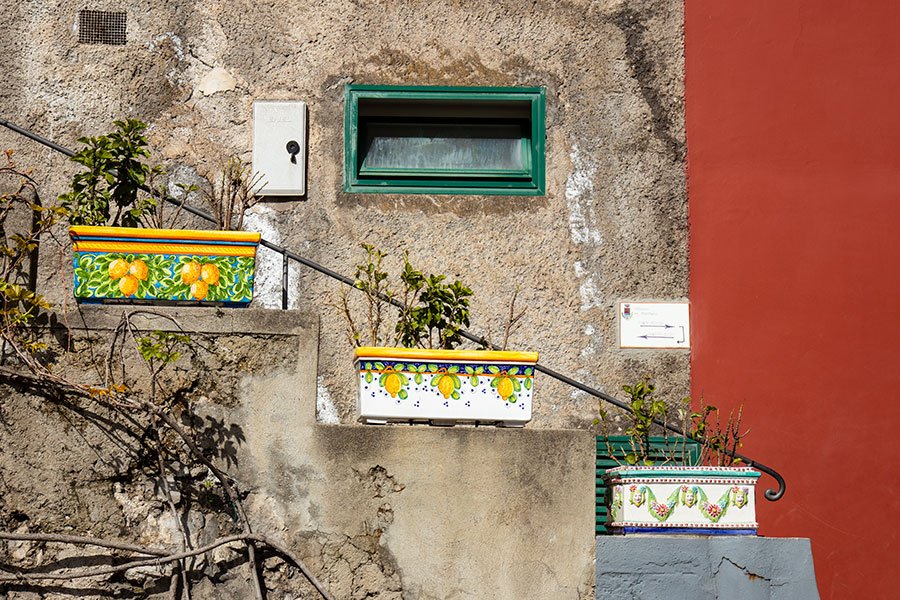 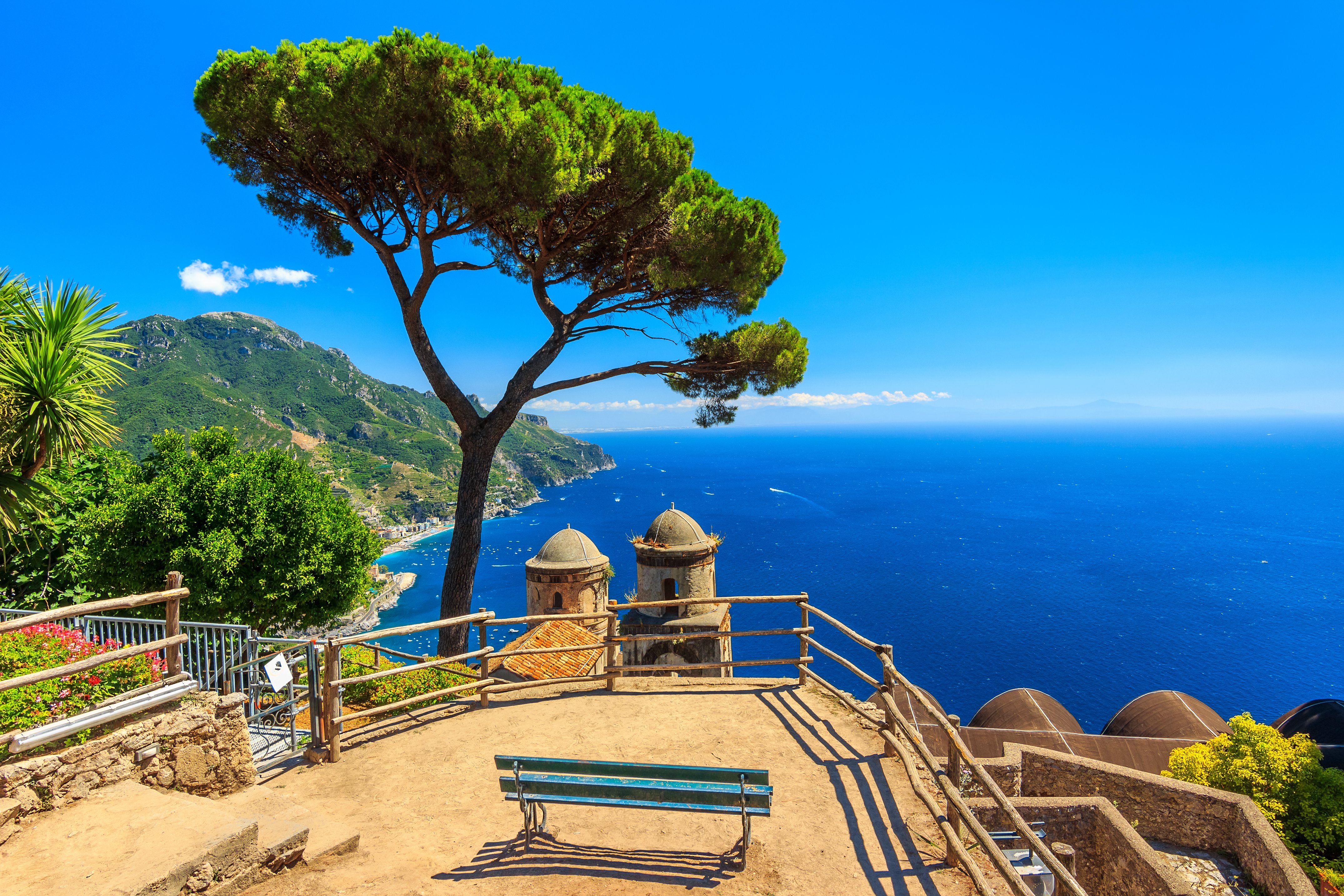 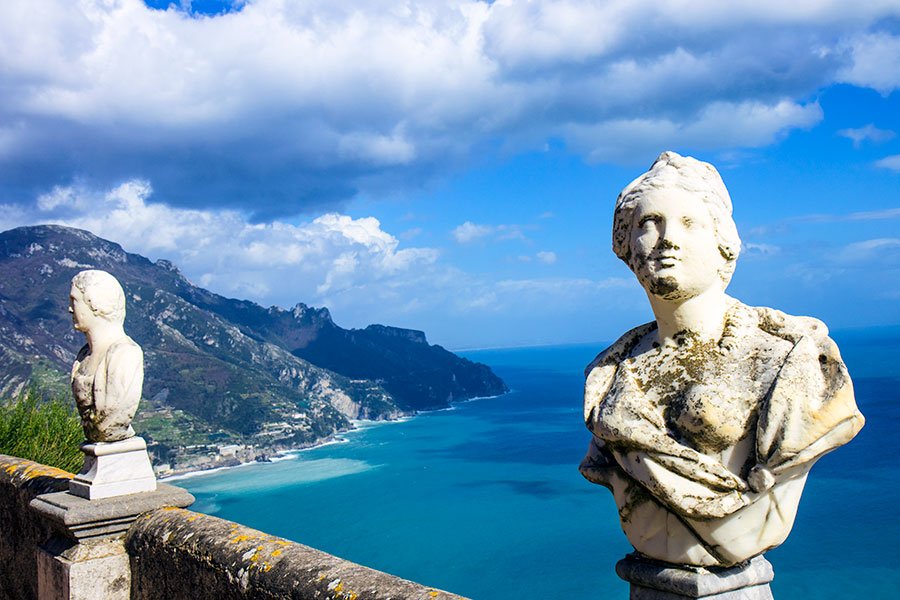 Detail at the Villa Rufolo in Ravello, Italy 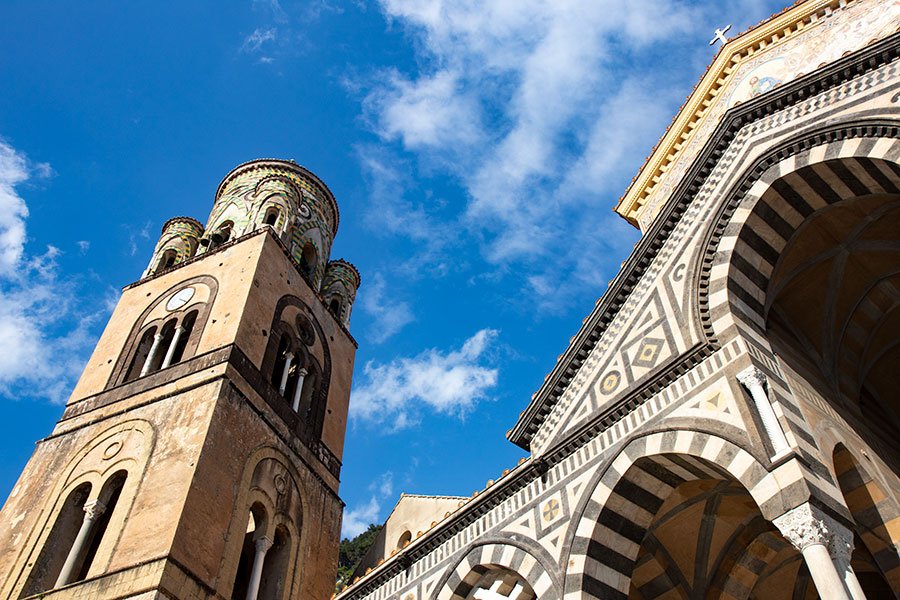 The beautiful cathedral in the town of Amalfi, Italy 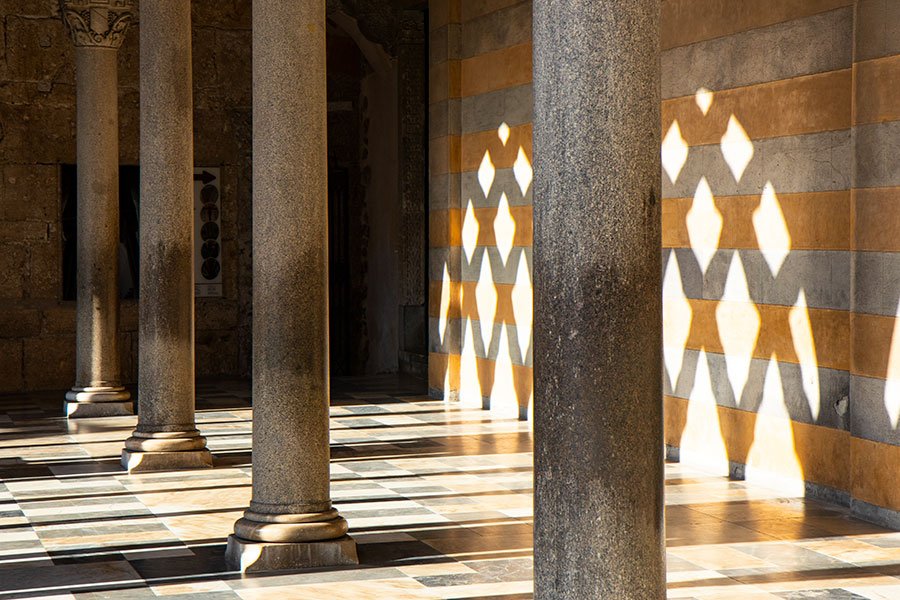 Detail of the cathedral in the town of Amalfi, Italy 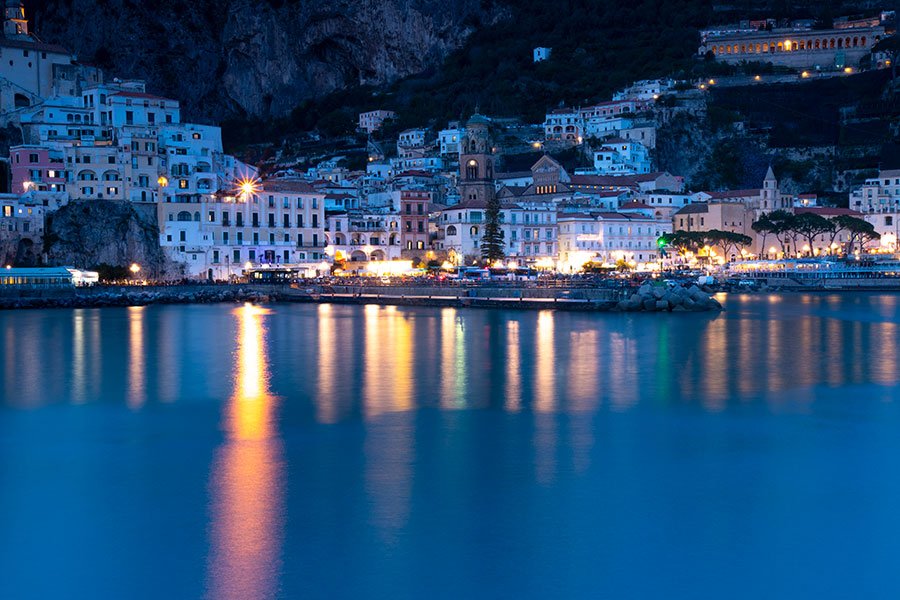 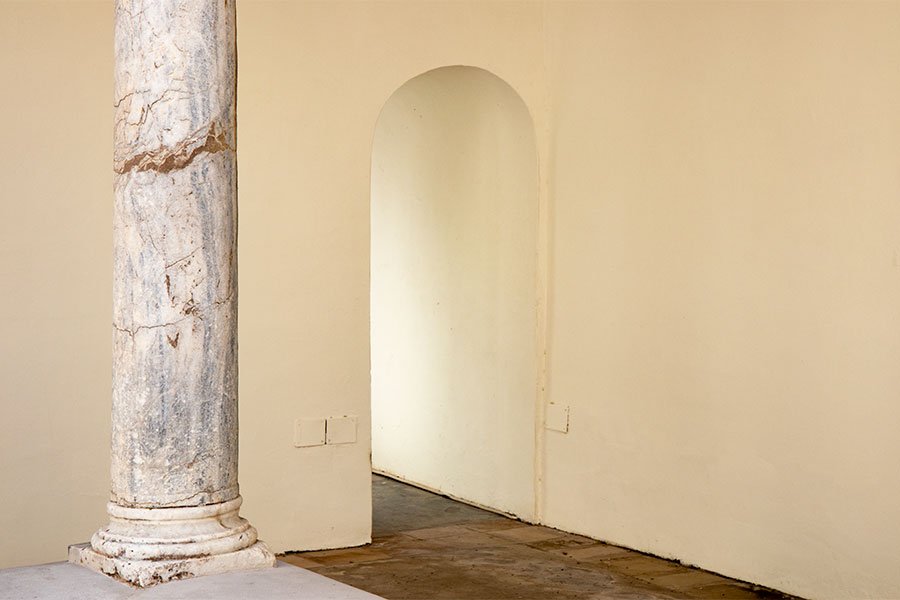 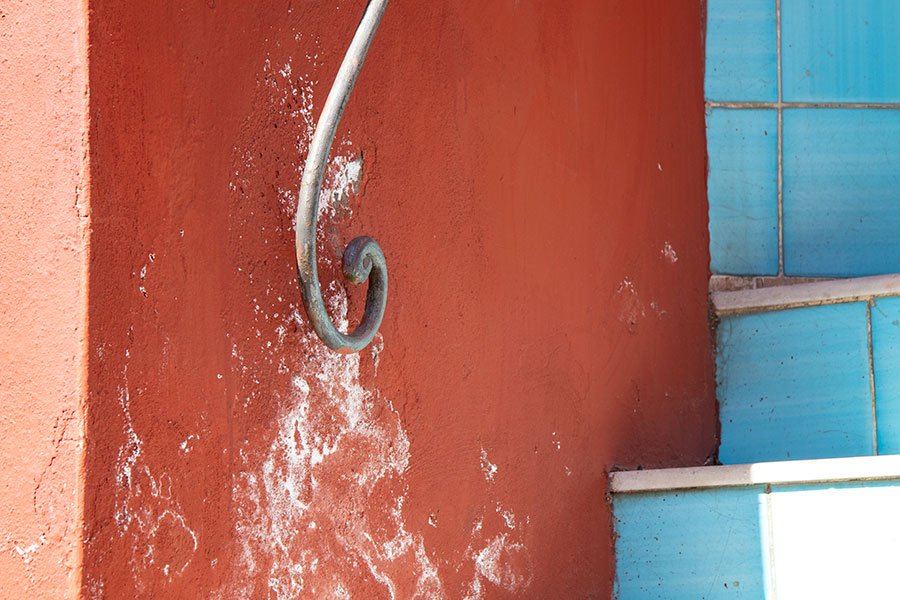 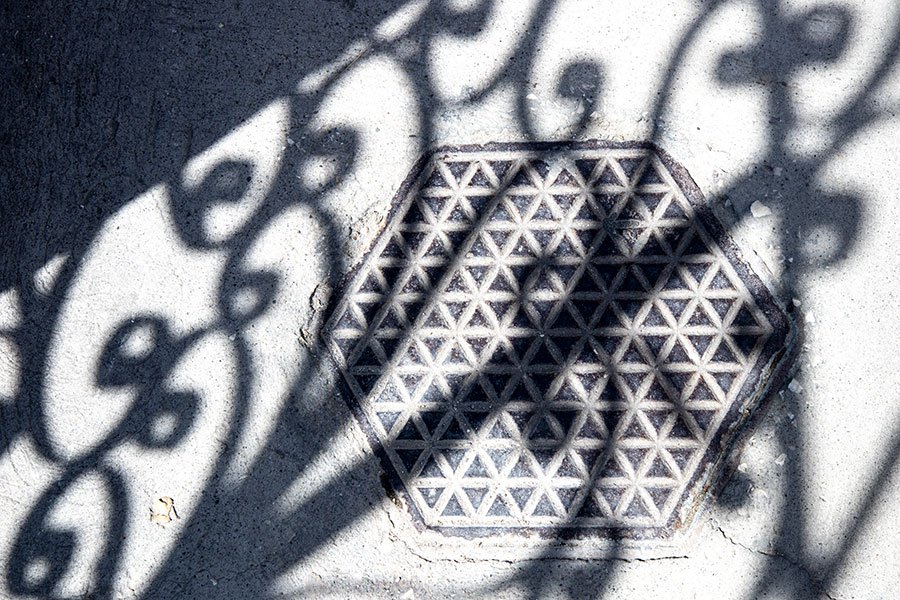 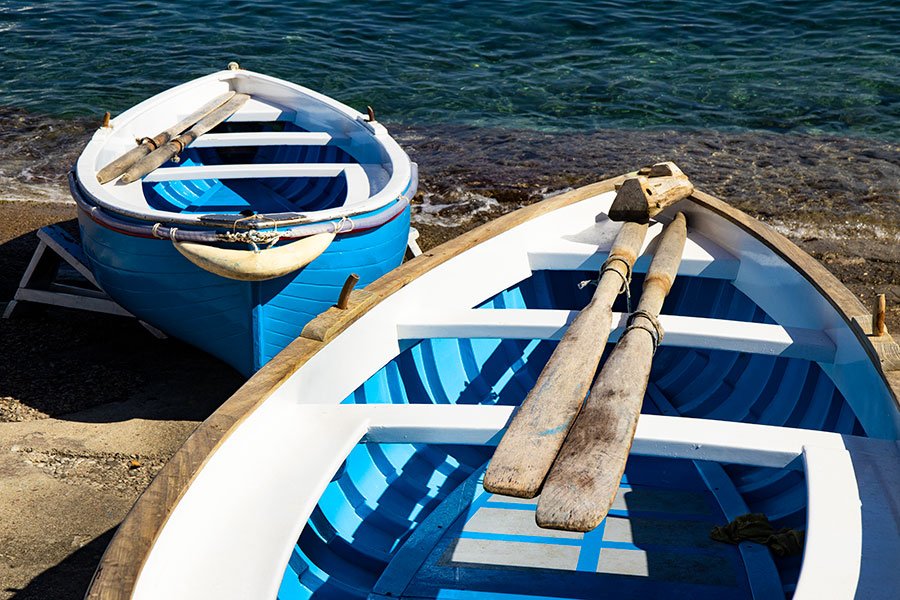 And speaking of Sofia: Here she is, in all her comedic glory acting as a not very talented show girl with 3 wicket dance moves. Click here and enjoy!