It was a morning in late June, four years ago now. Our family was housesitting for friends, enjoying a month at their beautiful home between Bonnieux and Lacoste. We were happy to be back in the Luberon.

That summer we often got up early to hike in the morning, before the day was too hot. On this particular morning, I planned a circular route around the nearby village of Saignon, a hike that took us up on the Claparedes Plateau, a rocky shelf that stretches in front of the Luberon mountain between Bonnieux and Saignon. This is an area with remains of many ancient settlements… a quiet area undiscovered by most tourists. A long road stretches straight from one end almost to the other, scrubby woods and lavender fields on either side.

Our trail emerged from the woods into a field, and there on the right, at the far end of the field, was a beehive shaped stone structure, one of the Luberon’s famous “bories.” We were delighted. We’d seen many bories, but this one was different… perfectly shaped, with a few rows of lavender bushes down one side. A dirt path extended before us to the borie; we walked down and examined it closely. There was a covered well, a stone enclosure, and a low covered structure on the back. 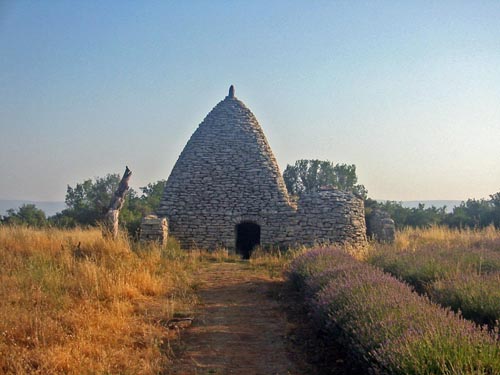 Our first visit to the borie

We knew about bories, as they are found throughout Provence and especially in the Luberon. A “borie” is a type of stone hut, constructed of stones cleared from the surrounding fields and made without mortar, the stones carefully selected and stacked a certain way to make them sturdy against rain and the Mistral winds. Some of the bories were used as shepherds’ dwellings, a place to shelter while they were tending to sheep or goats in remote areas. Others were used as animal pens, to store tools, or to protect a water source. Many bories stand alone, but some bories are clustered in settlements.

I don’t know why, but I’ve always been fascinated by the bories. I read that the earliest bories date to the Neolithic Age… I’m sure these are now just piles of stone. Most of the bories in the Luberon were constructed in the 18th and 19th century, when there was a big emphasis on agricultural development and new fields were cleared of stone. There are a few thousand bories in Provence, and over 1600 are protected and catalogued in the Parc Naturel Regional du Luberon as an important part of the patrimoine (heritage). The Parc’s logo (seen on the left) is a borie.

On that first visit, the borie seemed strangely familiar. Later, I realized I’d seen it on some calendars and postcards, surrounded by lavender. Although there was some lavender nearby when we first discovered it, there’s not much lavender in the field these days… just a variety of wildflowers, different on every visit. I’ve probably now visited this borie 25 times, and it is different every time, depending on the season, the weather, and even the time of day. I’m determined to one day see the borie in the snow. 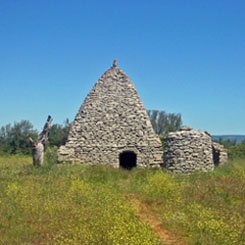 The borie in May… 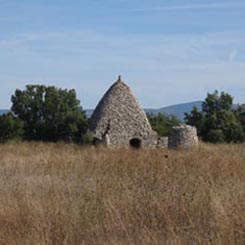 We discovered the borie in June 2006, and we’ve shared it with every Luberon Experience group (19 of them) since our first trips in September of that same year. I like to make it a surprise… an unannounced stop. We take the route from Bonnieux to Saignon along the plateau and pull over on a small road. “We’re going to stop here for a minute,” we say. “There’s something we want to show you. And bring your camera.” Everyone follows me along the rocky, narrow path, the Grand Luberon rising steeply to our right. Just two minutes from the road, we turn a corner, and there’s the borie at the end of the field, usually surrounded by a vibrant blue sky.

It’s one of those “Ohhhhhh” moments. We talk about the borie and walk close to inspect it and look at the well. Some people go inside, and others walk all around. It’s spacious inside, with a type of loft or platform. There’s always some discussion about the construction. In May and June people are interested in the flowers and the butterflies in the field. Everyone takes photos. 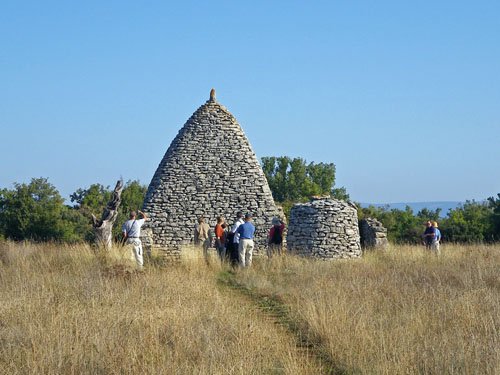 Our group explores the borie (Sept 2009)

Despite its presence on calendars and postcards, I think of the borie as “my” secret spot in the Luberon. I ‘ve never seen anyone else there. It’s just is a short walk off a little road in an isolated area, and you have to be hiking or know that it’s there. You can’t see it from the road and there’s no sign or parking area. Lots of tourists visit the “Village of the Bories” in Gordes, but this is different… more personal… more real.

I’d love to know the story of this borie. When was it built? Has it been restored? It’s so perfectly constructed, with its pointed spike at the top. There’s a sizeable well, some stone enclosures, perhaps for animals or chickens. Did a shepherd make his home here a few hundred years ago, tending to his sheep in solitude? Where was his family? And who owns the field now? I’d love to let them know how much this special place means to me and how much I enjoy sharing it with others. 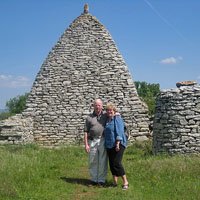 Kathy and Charley Wood lead European Experiences, week-long “slow tours” in some of the most beautiful areas of Europe, including The Luberon Experience in Provence, France. Their 2011 trips will include three weeks in the Luberon and two weeks in the Chianti region of Tuscany, Italy.

Kathy and Charley have been traveling in Europe for almost 20 years and love sharing their special places in Europe with others travelers. Read more about Kathy and Charley here. After almost three months in Europe, they’re now settling back at home… and looking forward to being back in the Luberon in September.