At least part of each of my tours takes place in the Serchio River Valley between the Apennines and the Alpi Apuane. The Apuan Alps form a short, little known mountain range which runs parallel to the north Tuscan coast, about 7 km (4.3 mi) inland, consisting of 33 main peaks ranging from the low Monte Antona at 907 m (2976 ft) to the highest Monte Pisanino soaring to 1946 m (6385 ft). Even if you haven’t heard of the Alpi Apuane, you probably know about Carrara, its marble and Michelangelo’s fondness for it. If you’ve flown into Pisa or driven down the coast from Genoa to Pisa, you might have mistaken the gleaming white quarries for snow on the peaks. 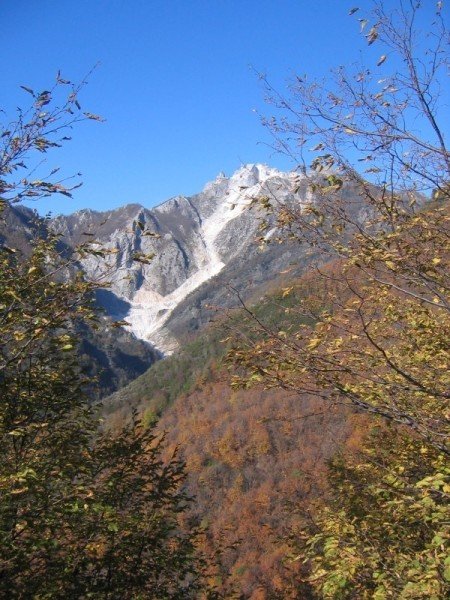 Recently I attended the opening of an exhibition of three female sculptors, which started me thinking about the importance of marble in this area. 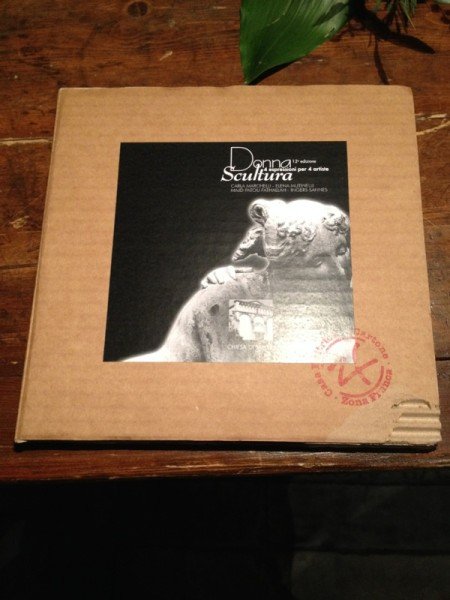 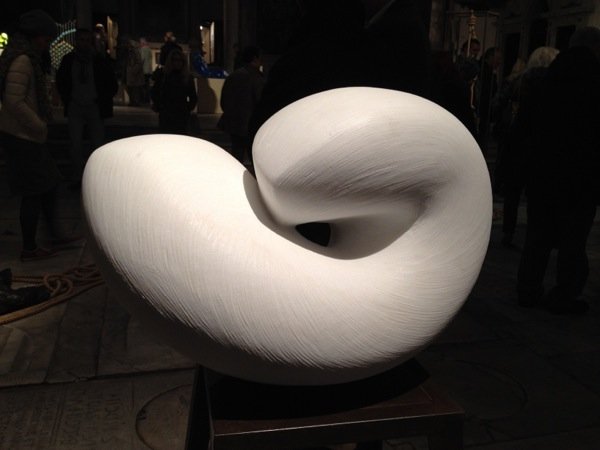 Marble is everywhere. At the mouth of the Arno, the quay is composed of random chunks of marble. 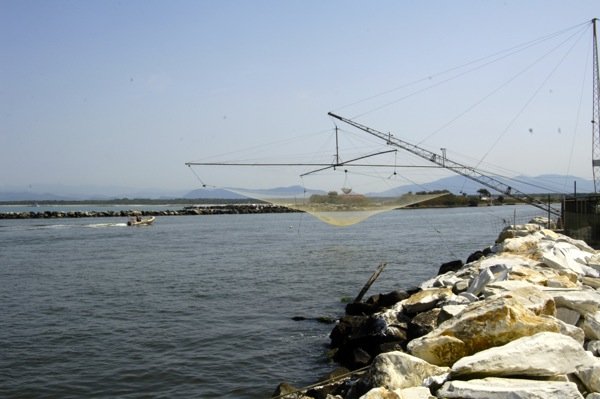 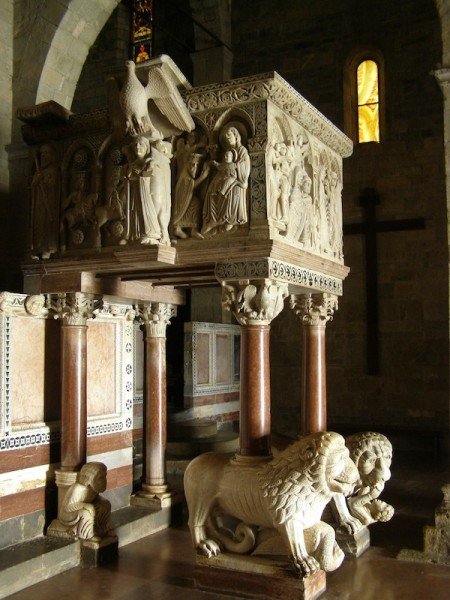 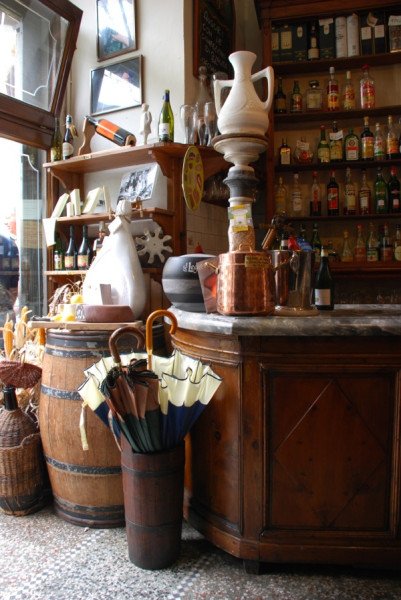 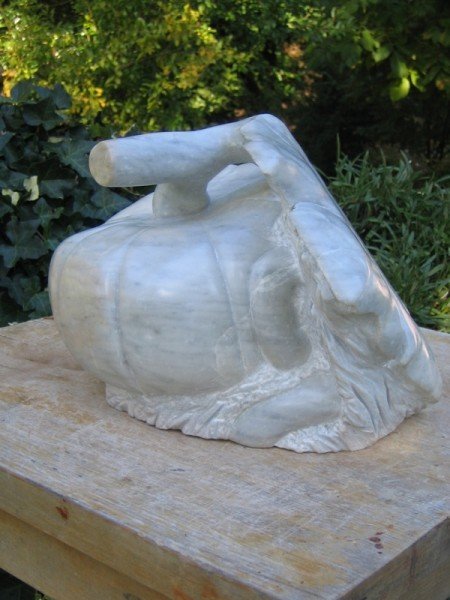 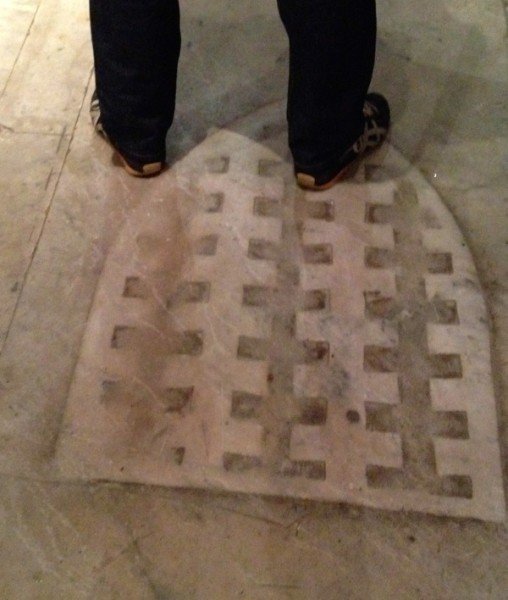 The marble triangle that resonates with me is the one in which marble artisans are the pivot point between food and art. A quarryman extracts the marble, a marble artisan shapes a conca (a marble basin) in which a norcino (an artisan pork butcher) cures lardo (slabs of pork back fat, cured with salt and herbs), which in the past sustained the quarryman. 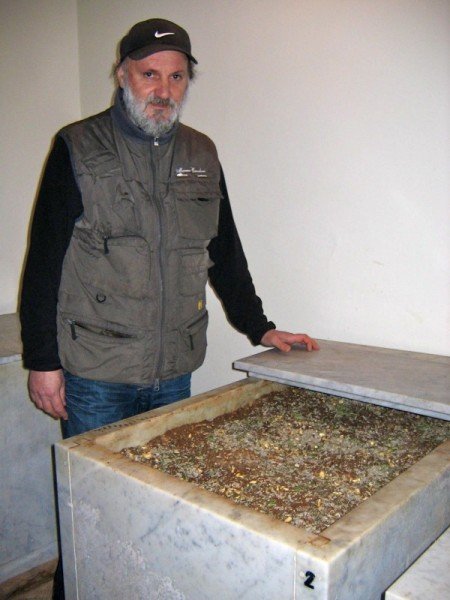 Fausto Guadagni with his lardo in a marble conca, Colonnata

In the days before the internal combustion engine allowed quarrymen to drive to work from their homes at the base of the Alpi Apuane, the men stayed in the quarries the whole week, coming home only at weekends. Without refrigeration, they needed high-energy food that didn’t spoil. Their families produced lardo from the pig they slaughtered in January. Along with a chunk of lardo, each man carried up to the quarry a loaf of home-baked bread and, in summer, some tomatoes. In this chicken-and-egg situation, it’s hard to know which came first, the quarryman or the lardo. 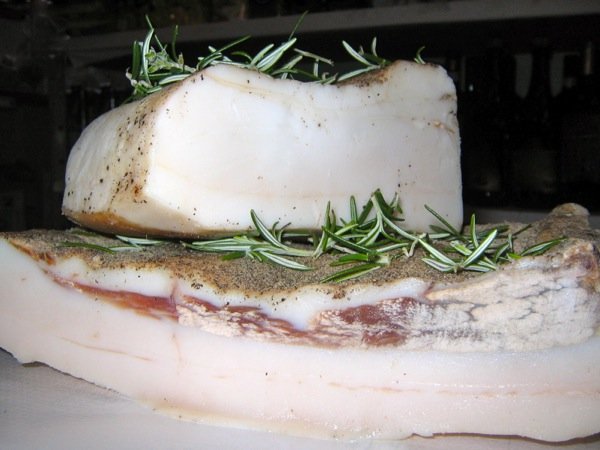 Lardo, the perfect nourishment for a quarryman

The conche were often decorated, sometimes simply with a date and the initials of the artisan, sometimes with geometric designs, so a cellar full of conche becomes a craft exhibition, as well as a place for maturing lardo. 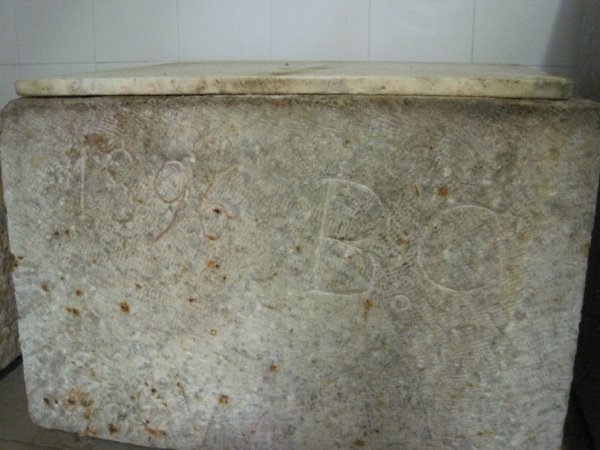 Massimo Bacci’s conca dated 1896. It’s not as old as it appears. B.C. are the initials of the artisan. 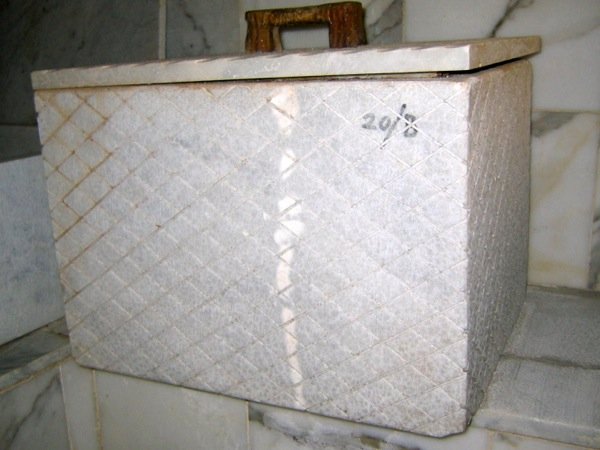 One of Fausto Guadagni’s conche 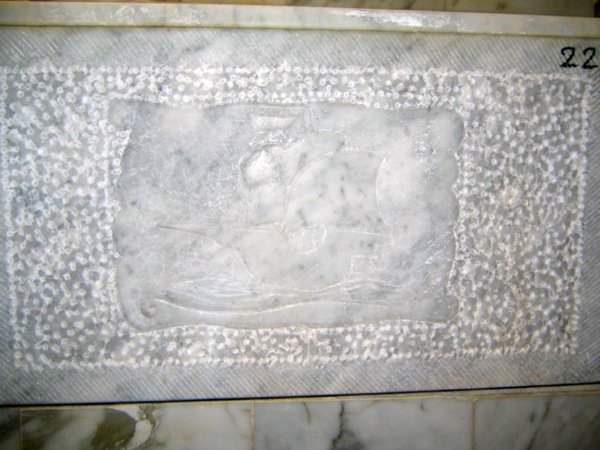 Fausto has quite a collection

A specialised branch of marble artisans work in sculpture studios. I learned about them from my friend Inger Sannes, a Norwegian sculptor whose exhibition started this train of thought. 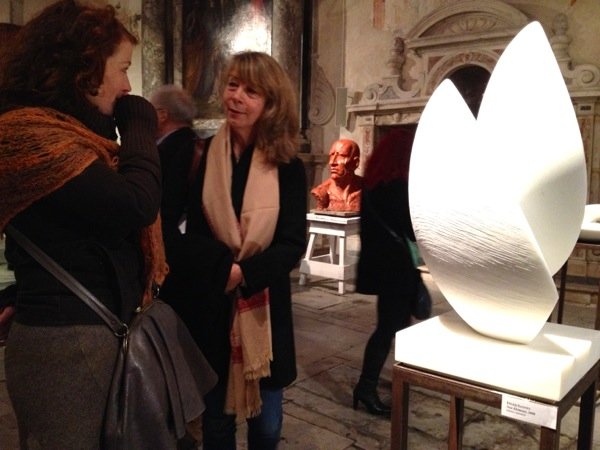 Inger Sannes (2nd from left) at exhibition in Sant’Agostino, Pietrasanta

She chose to work at Studio Sem in Pietrasanta, the town where Michelangelo stayed when he came to select marble for his commissions. 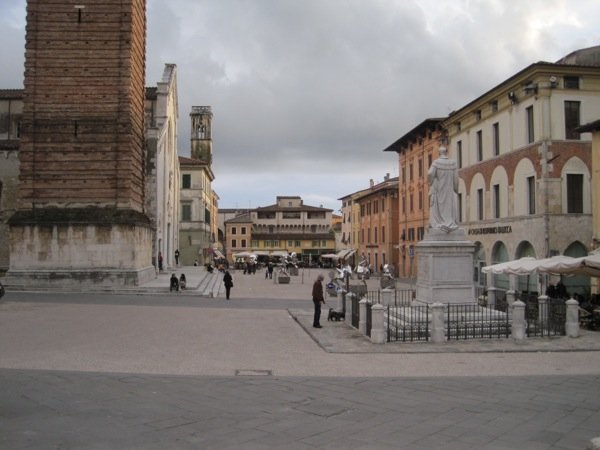 Founded by Sem Ghelardini in the 1950s, his studio became renowned for producing large-scale works by celebrated sculptors like Henry Moore and Joan Miró and still attracts sculptors of the calibre of Helaine Blumenfeld and Damien Hirst. The studio’s artisans use techniques passed down through their families. Their numbers are in steady decline, a species long endangered by the rise of the romantic solitary artist and, most recently, by technological changes. Some sculptors, like Inger and Eppe de Haan, use the artisans to rough out a sculpture and sometimes to help finish it, whereas others entrust the execution of the entire sculpture to the Studio, working closely with the artisans during the finishing stages. 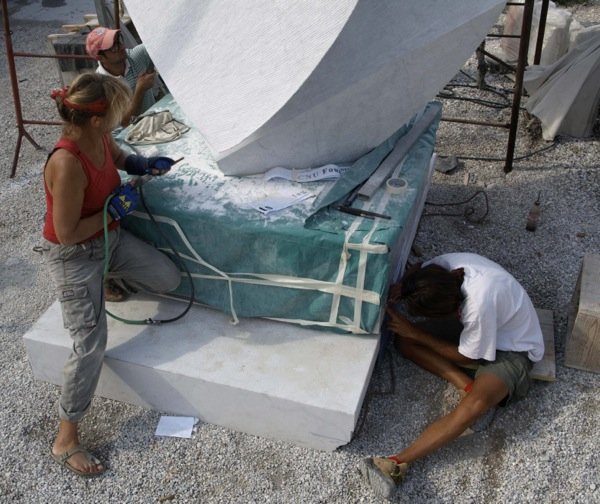 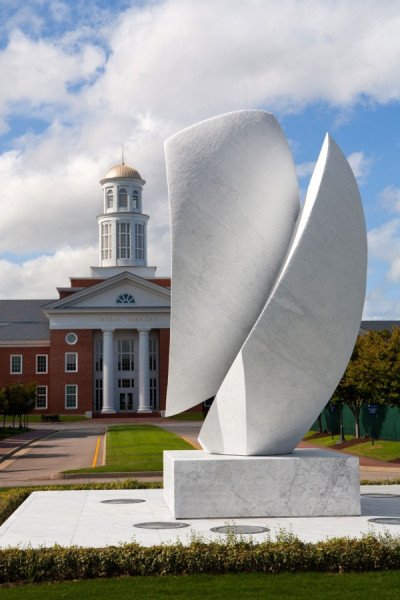 I enjoy taking my guests along the marble path I’ve discovered leading from the quarries of Colonnata to museums showing techniques of quarrying and transporting marble since Roman times, from a lardo producer and lunch in his restaurant to Pietrasanta and Studio Sem. Despite a looser link to marble, I sometimes add a visit to Terenzuola, a wine producer whose Colli di Luni DOC Vermentino is the perfect accompaniment to lardo. The only connection I can think of for taking people to Birrificio del Forte is its proximity to Pietrasanta. The excellence of its artisan beer is enough to justify the link for me.