The week-long cruises that we run on our hotel barge the Saint Louis are in south west France, largely between Toulouse and Bordeaux.  We do not normally take the barge into either of those two cities, but rather we travel gently through the unspoiled countryside along the Canal de Garonne, in an area that used to be called both Gascony and Aquitaine.  Gascony is famous for a number of things, including Armagnac, Henri de Batz who became known as d’Artagnon of The Three Musketeers fame  –  and numerous mediaeval towns and villages.

Foremost among the mediaeval masterpieces in this area is Moissac Abbey.  The date and the detail of the founding of the abbey is a matter of some conjecture, with some authorities attributing it to Clovis I (481 – 511 AD) while others attribute it to Clovis II (635 – 657 AD).  Archaeology has shown that there were already settlements in the immediate area, and remains of a Gallo-Roman hypocaust have been uncovered.   After it was founded, however, the Abbey struggled to find its position of strength in the region, and it is believed that it had severe financial problems.  That all changed in 680 AD, however, when the Abbey was given an extraordinary donation by Nizezius and his wife Ermintrude, who made over to the monastery thirty thousand hectares of land in the Garonne valley.  This gift effectively included some eighteen villages, complete with all houses, mills, churches, serfs, settlers and freemen. 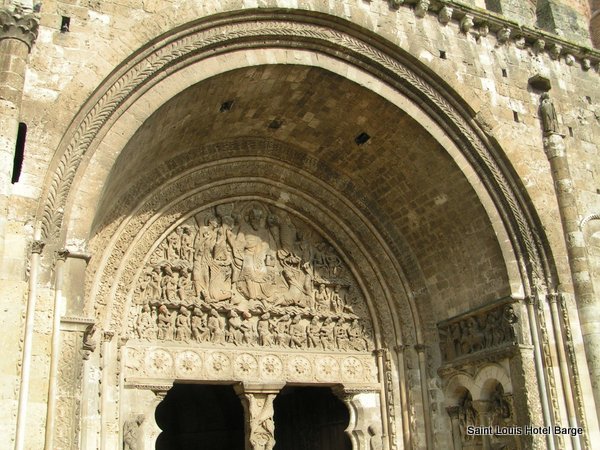 The entrance to Moissac Abbey - "The Tympanum"

The history of the Abbey during the following few hundred years is uncertain, because documentary evidence has been lost, but certainly the area in which it stands had invasions from the Saracens, the Normans and the Magyars.

Building and re-building on the site took place almost continually, particularly after 1048 when the order was absorbed by the immensely powerful Cluny order.  A new church was built in 1063, and the present cloisters were constructed in 1100 AD.

At this time, the scriptorium was enlarged.  Moissac Abbey is known as the City of Roman Art, partly as a result of the very considerable works produced in the scriptorium.  The monks made their own parchments, inks and paints, and the scribes copied both religious and profane texts.  Many of the originals of these works are to be found in the French National Library.

After the Hundred Years War, Moissac Abbey went into decline, and in 1466 it was separated from Cluny.  The Abbey was later secularised, and after the Revolution the religious community disappeared and the buildings were sold off.

The Cloisters are said to be the finest in the world;  there are seventy six columns that support the cloister roof, placed alternately as single and double columns.  The columns are surmounted by carved capitols, each depicting stories from the Bible or scenes from wild life. 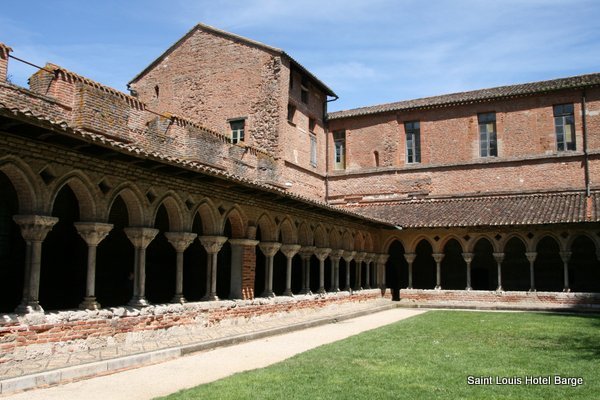 Within the courtyard formed by the cloisters there stands a magnificent cedar of Lebanon.  The story goes that a native from this part of France travelled out to the Holy Land, where he collected a number of plant species including some of the local trees.  He returned in 1812, and one of the trees was planted in the cloisters.  Hence, we can date this particular tree quite accurately! 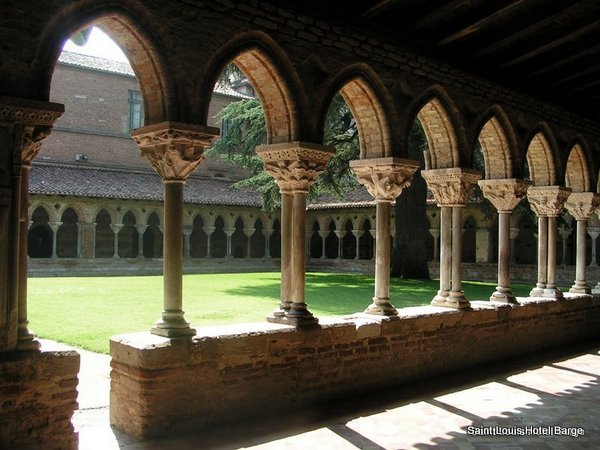 There was one other step in the demise of the buildings which we see today in that in 1845 the Toulouse – Bordeaux railway line was laid, and the original plan was to run the railway bang through where the cloisters are.  Fortunately that plan was eventually changed and the refectory building was demolished for the railway instead,  but the line is still very close and every passing train serves as a reminder to anyone sampling the extraordinary ambiance in the Cloisters that we are now living in a very different era from that in which the Abbey was built.

This part of France enjoys a very gentle level of tourism, quite unlike the crowded places of Paris or Carcassonne.  Moissac Abbey has been presented to the public in a very sympathetic way, and it is the busiest tourist destination in the Département, but you are unlikely to find crowds here, even in the height of the season.  South west France does not do crowds!  However, you are likely to find pilgrims in Moissac.  The ancient pilgrimage route of Santiago di Compostella passes through the town, and the pilgrims invariably visit the Abbey before making their way along the canal towpath to Pommevic, then onwards towards the Spanish border.  Only 1,200 kilometres to go from here!