OK, six months passes and I return to Italy for vacation, tour leading and to finish the sale of a lovely piece of agricultural property in Bagnoregio.  If you recall, I had completed the first step in the process of the sale by paying a deposit of half the amount of the agreed upon price.  The next step was to pay the balance and sign the paperwork, which would put the deed in my name.  Sounds simple enough to me, most especially if one speaks fluent Italian (which at that time I did not)!  I would spend the better part of a day regretting that “infraction”, if not several others. 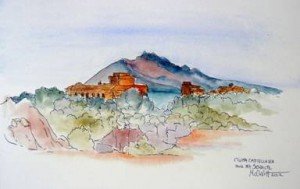 In order to complete the transaction the notaio (para-legal), Bruno, the owners and myself would need to travel to Viterbo, the “county seat” of the region, a forty-five minute drive.  After agreeing to meet late morning  in the piazza, the farmer arrives with not just his wife, but her two sisters, their daughter and a niece.  And, no car!  Why would the farmer bring a car? He and the missus never traveled out of Bagnoregio and the only vehicle he owned was a tiny, three wheeled, one passenger truck that sounded like it had a sewing machine for a motor.  He drove that twice a day, his only vehicle, to the property we were exchanging where he spent his time gardening and managing his chickens, rabbits and several sheep.  No way was he driving to Viterbo, he informed us, so after some negotiating it was determined that Bruno and I would be driving the group to Viterbo in our two cars. By now half an hour has passed and we’ve not even left the piazza! 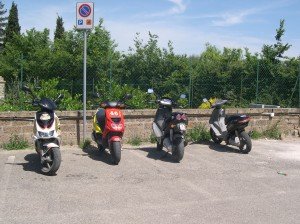 Did I mention that the whole family showed up wearing, again, their “Sunday best”? Yes, and it was clean, pressed and vintage mid-century, same as the first meeting.  And of course, everyone was talking all at once with instructions for seating, routes, and who knows what else, as I was still struggling to understand Italian.  I was fortunate enough to have mama and her sisters in my car, with not word of English between them, shouting louder and louder at me in hopes that I would understand what they were saying by raising their voices ever higher.  “Capice? Capice?  That, I understood and my answer was continuously, “no, non capisco, mi dispiace”………or in English:  “Do you understand?  No, I do not understand, sorry.  And I’m not even sure that was the correct Italian response!

So needless to say, after trying to navigate the two lane road,  find Italian translations in my rattled brain and doubting my decision to own this beautiful two and half acres of farmland, I was a bit frazzled and had a pounding headache when we arrived.  But reminding myself I has more than half-way through the process I just kept telling myself it would be over soon.  In retrospect, which is always so much more fun to ponder later, I wouldn’t have changed a thing.  It’s one of those events that sticks out in my memory as an unbelievable piece of theater that could not have been fabricated had someone tried.

We arrived at our destination, a very ancient government building just outside the town’s historic center and ended up in a room just large enough to  house an enormous marble topped conference table that could seat twenty comfortably.  We were about ten, including Bruno, myself and the county clerk who would be conducting our business.  After getting ourselves seated and organized the clerk passed around a pile of papers and asked us all to sign, which each in turn did.  That is until the papers were passed to one of the older sisters in the family.  She crossed her arms and stated emphatically, “no escrito”.  And refused to sign.  After she repeated this twice more, my heart landed in my stomach and my bravado completely disappeared.  Oh well, nice try, I thought.  I guess this was just not meant to be.  Stay tuned for the next chapter in my quest to have property in Italy!