It was the olive harvest of November 2004 that set me on the path to creating Sapori e Saperi Adventures and organising my special type of slow travel tours. I was staying on an estate near Lucca with a modest number of olive trees. At the beginning of November three men arrived carrying nets and bamboo poles. They spread the nets on the ground under the trees and began to beat the olives from the trees with the poles. 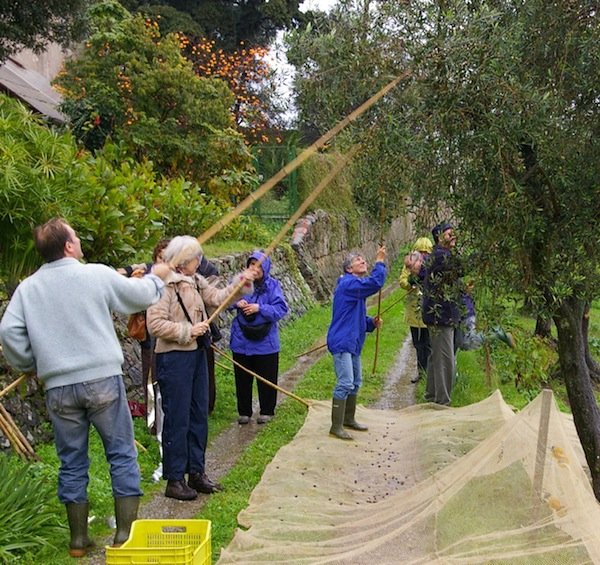 I knew nothing about how an olive was transformed into oil, and I wanted to learn. My request to help was greeted with dismay, almost alarm. The estate manager explained that while they worked they gossiped, often using foul language, and they worried that my presence would cramp their style. I promised not to stay too long, but got to do enough to understand that a green olive is an unripe black one, not a different variety, and that when you pick, you pick all the olives on the tree, some of which will be fully ripe and others only partly ripe. Judging when to harvest is part of the skill of producing a top quality oil. 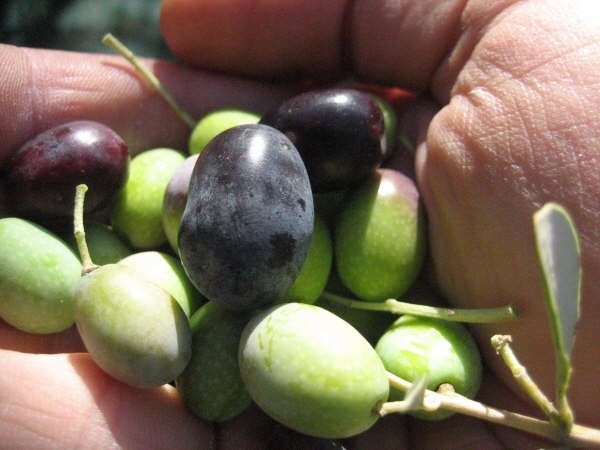 I now know that beating up olives with a stick is not the best method of getting them off the tree, but at the beginning you grab whatever opportunity comes along. 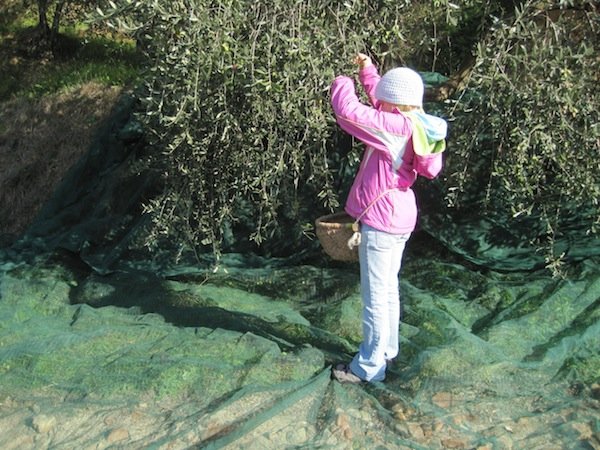 Picking by hand doesn’t bruise the olives. It’s so easy even a child can do it. 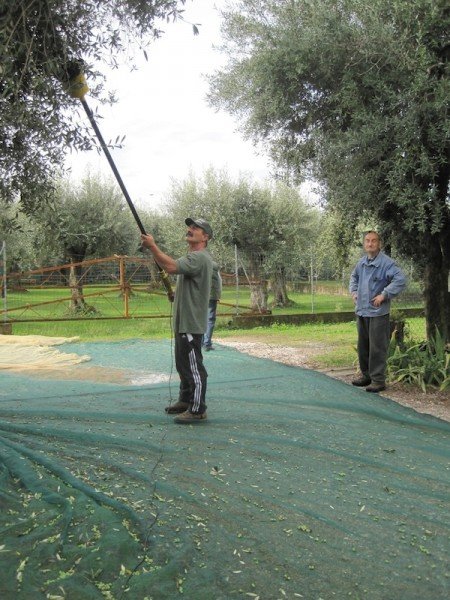 If you’ve got lots of trees to pick, you can use vibrating plastic fingers to do the work.

I also went to the olive press (frantoio) with the olives. Since nearly everyone in the Province of Lucca has at least a few olive trees and harvests their olives between mid-October and the end of December (depending on how you want your oil to taste), the presses are open 24/7. Like going to the doctor, you have to book an appointment, which in our case was at 10 pm. However, the frantoio wasn’t at all like a doctor’s waiting room. It was buzzing with life as people arrived with their cases of olives while others watched as their olives were being processed, partly for the excitement of seeing their new oil streaming out at the end, but also to make sure no one else’s olives were substituted for their own. Coffee and bread (on which to drizzle your new oil) were available in the corner, and children and dogs were underfoot. 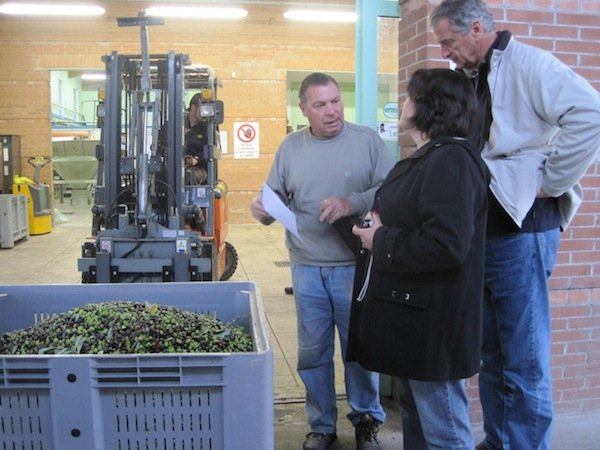 Augusto Orsi compares notes with other oil producers in a good year at the press. 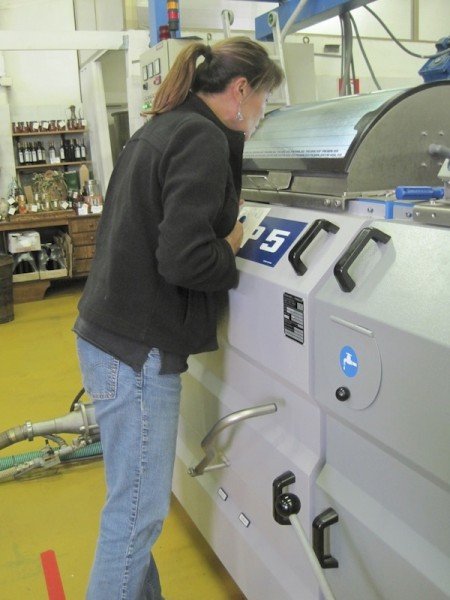 Checking how your oil is progressing. 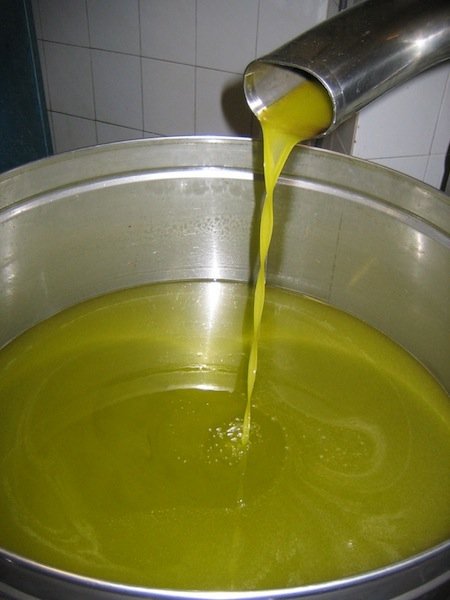 This year there is none of that. The olive groves are empty of harvesters and the presses are mostly silent. The olive fly has had a feast and left not even the crumbs for us. If there’s an olive left on a tree, it’s inhabited by an olive fly larva greedily sucking the olive dry. The rest have dropped wizened to the ground. 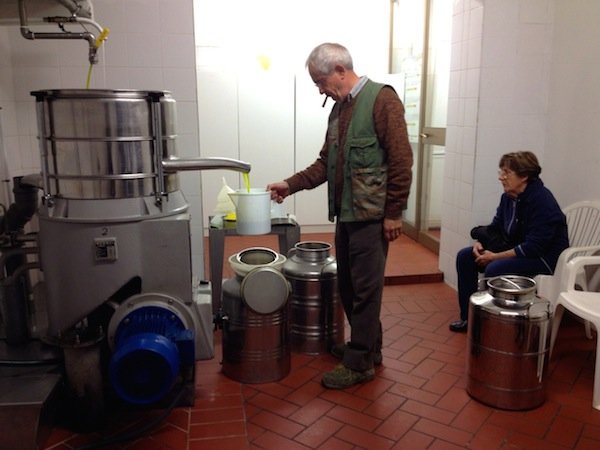 The lone customers at the frantoio this year.

Picking and pressing olives is a popular activity among my guests. We go to Alle Camelie, an organic olive estate where the young farmer, Claudio Orsi, puts you gently to work. You’re out in the Tuscan countryside; it’s not too physically taxing; you learn things that are useful to you at home (like how to taste oil, buy good oil and store it); and you get a fabulous lunch on the olive estate. 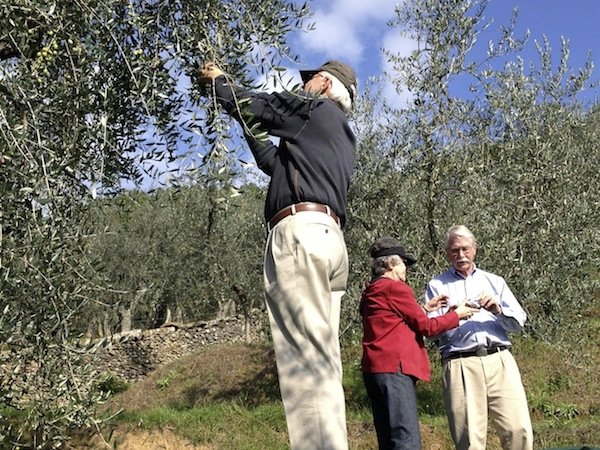 Harvesting olives under the Tuscan sun 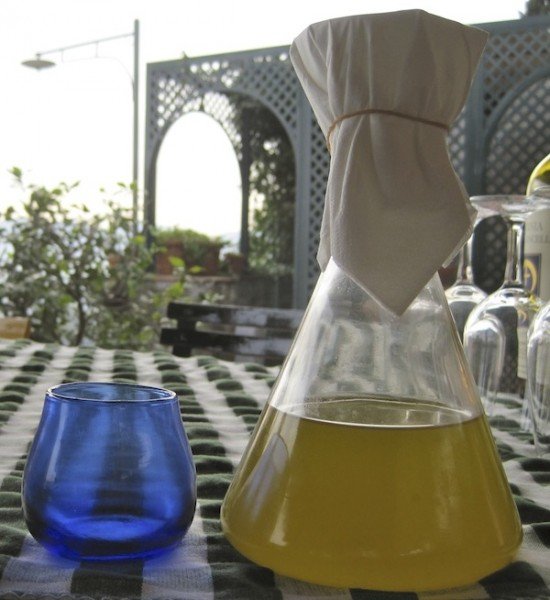 Blue glass of professional oil tasters prevents them being influenced by the colour of the oil. 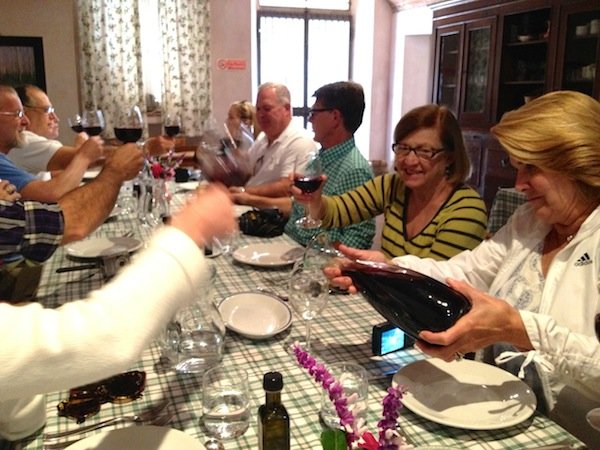 A toast to lunch at Alle Camelie

About a week before my first aspiring olive pickers were to arrive, Claudio phoned. His voice was subdued. He’d run three batches of olives through the press (he has a state-of-the-art press at the farm) and the oil wasn’t good. He wasn’t going to press any more. What should we do? We decided to go ahead with the visit; it was worth it just for Elena Pardini’s lunch. 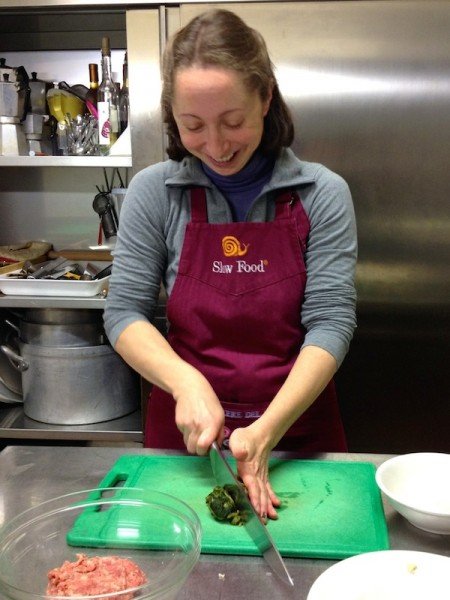 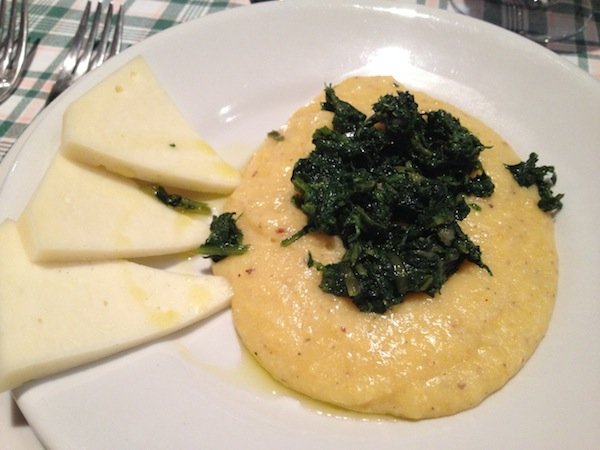 We would turn it into a hands-on lesson about why there wouldn’t be any Lucca oil for sale this year and a more general discussion about the difficulties facing small farmers and what constitutes a fair price for their produce.

Claudio conducted the group to the building on the edge of the olive grove where the immobilised olive press stood in dejected silence and where he hoarded the last of the 2013 oil. 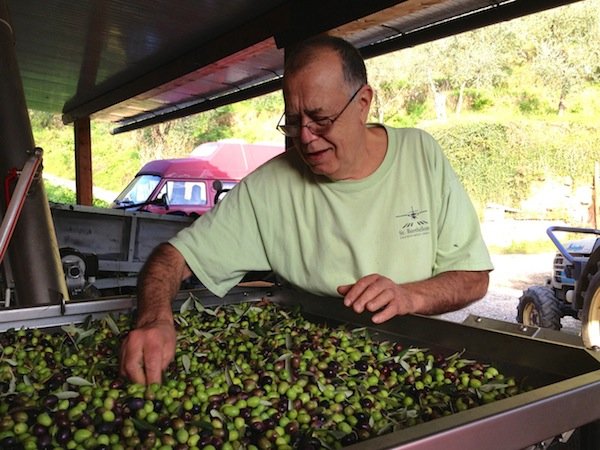 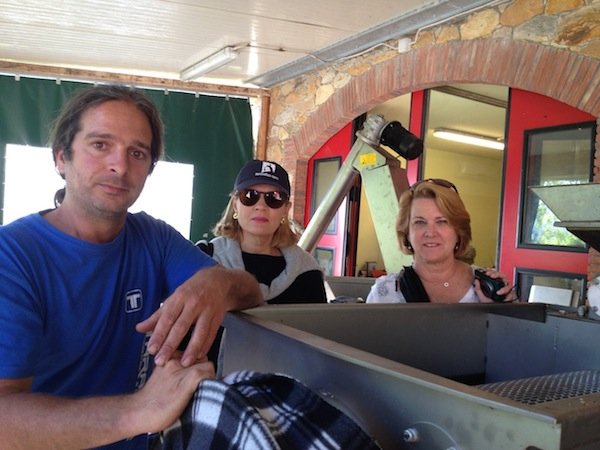 Pietro’s group this year at empty press with Claudio (left) 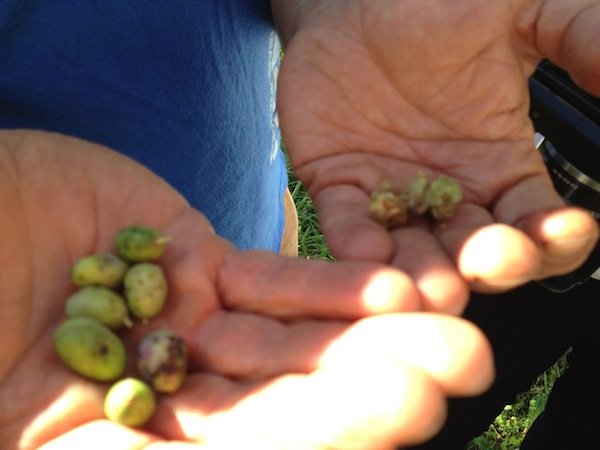 Sick olives (my camera refused to focus on them) 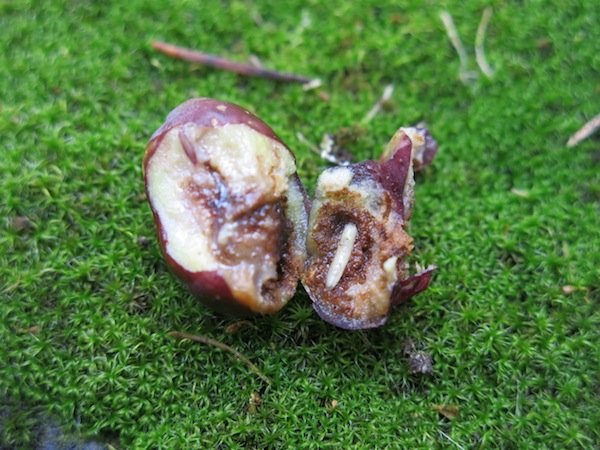 I was amazed at the interest of my guests, and the sympathetic yet probing questions they asked. How bad was it? In a normal year the yield of oil is between 12% and 15% of the weight of the olives pressed, and the quality earns him the Slow Food Snail award. This year it was 5% and the flavour of the oil was poor. To qualify as extra virgin in Italy, oil must have an acidity of less than 0.5% and his is usually below 0.1%. This year it was 2.5% which puts it in the category of lamp oil. 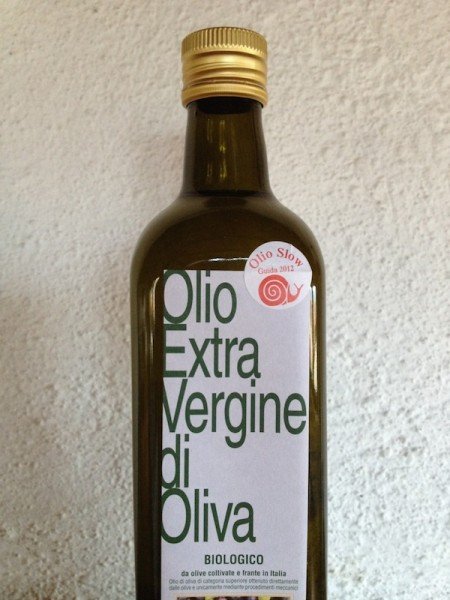 As an organic farmer, what can he use to control the fly? He uses pheromone traps, but during an infestation like this year, they hardly make a dent in the fly population. Could he have used chemical insecticides for one year and then go back to being organic? Not easily, and it was against his principles. Anyway, even the conventional farmers couldn’t spray enough to get a decent yield. The price of the insecticide and the labour wouldn’t be covered by sales of oil. 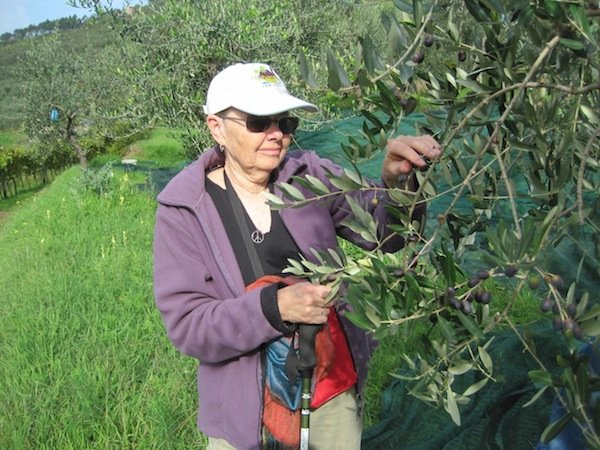 How would Claudio and his family survive? They’d have to tighten their belts, but luckily over half their income comes from agritourism (guests who stay on the farm), and his father Augusto is a successful builder which contributes to the family economy. 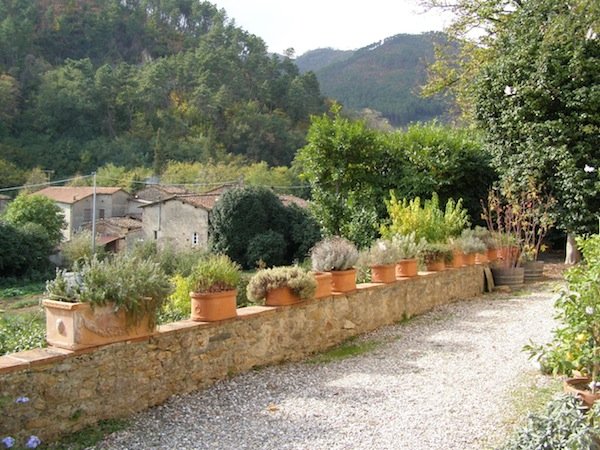 The agriturismo is a beautiful place to stay.

He had considered buying organic olives from another part of Italy that was less affected, but couldn’t find a suitable source. Would he raise the price of his remaining 2013 oil? Normally he lowers it when the new oil is ready, but this year he would keep it the same at €16 per litre. Our guests all received a present of the precious 2013 vintage.

How come we’re already seeing the 2014 olive oil in local supermarkets? Claudio had asked an industrial producer the same question. He imports much of his oil from Spain where the controls on extra-virgin oil are less stringent. He treats it chemically to reduce the acidity and correct any other defects, adds a small amount of Lucca oil to give it a hint of the local aroma and flavour and labels it as ‘bottled in Italy’, emphasising the point with a red, white and green banner.

We went to the dining room for a guided tasting of the 2013 and 2014 oils. In a way it was more interesting than tasting two good oils. Last year’s oil still exhibited much of its characteristic aroma and flavour. This year’s had little aroma or flavour, and what it had tasted a bit dirty, perhaps slightly fermented. A couple of weeks later when I took another group, it had lost even that flavour and was already smelling rancid. 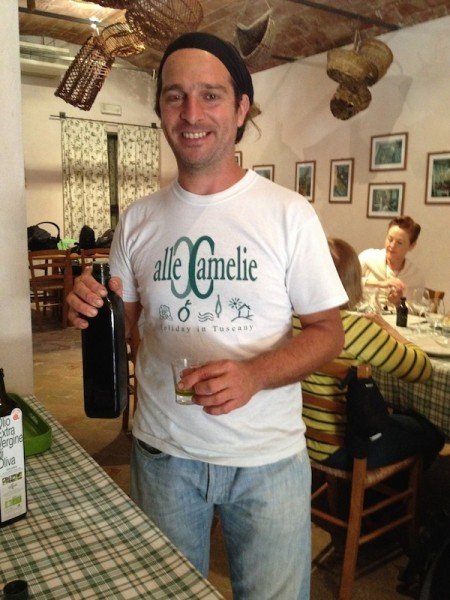 Claudio puts on a good face while holding the never to be labelled bottle of 2014 oil.

With their new insights gained during the visit, my guests can now interpret the sub-text of this carefully worded press release I received from an oil exporter (who shall be nameless) inviting the public to a tasting in London:

‘Sample the first Extra Virgin Olive Oil, known as “Olio Novello”, from the November 2014 olive harvest. This “Olio Novello” is extremely rare, and as a guest you will be the first to taste this limited release oil, flown in from Lucca, Italy especially for this event.’

As we were leaving Alle Camelie, Claudio’s father arrived, and I commiserated with him. He replied sadly that it wasn’t only the economic loss that they mourned. There was a psychological loss as well. In the autumn he was used to coming home from a day’s work, cutting a slice of bread, drizzling it with the new oil and enjoying it’s heady grassy aroma and piquant-bitter flavour. It’s a pleasure we all must forego this year.