Last summer we wrote about the delights of walking part of the South West Coast Path on the southern coast of England when we took a mid-season break.

Fortunately, such pleasures aren’t restricted to the summer. When catching up with family and friends over the winter, we are lucky enough to stay within 5 minutes walk of the sea and after a short walk down the road, this is what we see. 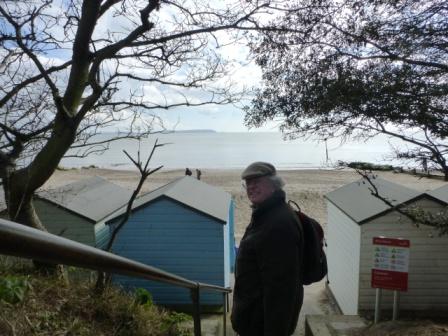 From our local beach, the Isle of Wight is clearly visible, with the well known landmark ‘The Needles’ – the name says it all. Tall thin rocks that stretch upwards from the sea to the sky. It’s quite a contrast to our home in the Dordogne from where the sea is two and a half hours drive to the west!

The scene we look out at today is vastly different from the way it was in prehistoric times about 10,000 years ago when instead of water, the scene would have been a grassy plain crossed by herds of migrating reindeer. There is plenty of archaeological evidence on the seabed – although a lot of it is difficult to access. Improving remote sensing techniques and devices are gradually expanding our knowledge plus spin-off from underwater geophysical surveys searching for oil and minerals including gravel. 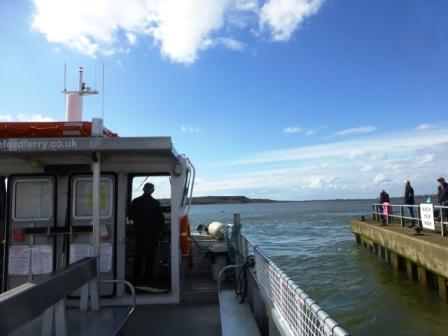 On the Mudeford Ferry heading to Hengisbury Head

Arriving at the seafront, we turn right along the seafront to the end of the quay where a little ferry plies back and forth between Mudeford Quay and Hengistbury Head. More archaeology! This headland is a promontory Iron Age hill fort which was constructed around 700 BC but its history stretches back longer than this to the Neolithic period and even to the Ice Age. It’s a very ancient site indeed and has been designated a Scheduled Ancient Monument. Today the area is well used by both locals and visitors alike and is also very important for its rare natural habitats so it has also been designated as a ‘Triple S.I.’ – a Site of Special Scientific Interest. For example, on Hengistbury Head 500 plant species, 600 types of moth and 16 different dragonflies as well as 300 species of birds have been recorded. But for today, we merely walked through part of this landscape heading back in the direction of where our July walk had finished. On the last day, having taken the ferry across to Poole, we went along to Bournemouth, west to east. On this walk we were heading back towards our finishing point at Bournemouth walking towards the west.

It was a chilly and cloudy day with glimmers of sunshine, but whatever the weather, it is so invigorating walking so close to the sea. And there’s always something to see on the way…… 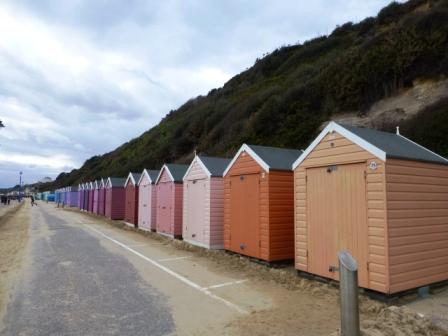 Beach Huts in a spectrum of paint chart colours

Perhaps it is an English curiosity – little colourful huts that line the promenades of our seaside towns? They are becoming increasingly colourful with lines of huts looking like a spectrum on a paint chart. The original hut that was constructed in 1909 has a prestigous Blue Plaque which declares what we call today a beach ‘hut’ to be the first municipal ‘Beach Bungalow’ in the UK – tres snob! 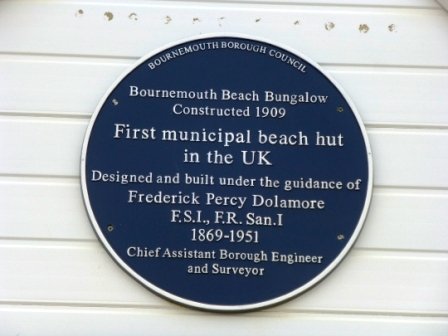 1909 was also the year that what became a music hall favourite was first recorded.  It’s a jolly, catchy tune and the lines “I do like to stroll along the prom, prom, prom” and “Oh, I do like to be beside the sea” seem particularly apt for us!

There are two piers on the route – something else that seems strangely British. In Victorian days, a Mayor of Bournemouth said “a seaside without a pier is like a pig without ears”!  Bizarre. We certainly don’t understand it – do you?  Near the one at Boscombe there are sculptures of rock formations seen along the area of coastline we walked last year – Durdle Door, Agglestone Rocks and Old Harry Rocks. You just can’t get away from archaeology and geology around here! These make a fun play area for children and climbing is positively encouraged – and there’s lovely soft sand to land on. 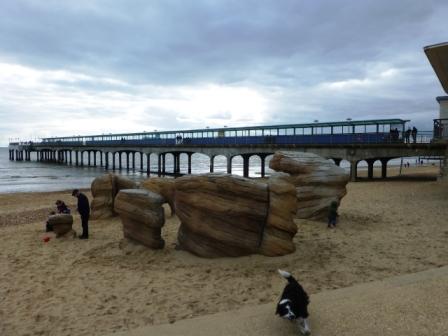 Copies of nearby rock formations make fun climbing for kids!

On the Pier itself there is a musical play trail, Steve couldn’t resist having a go! 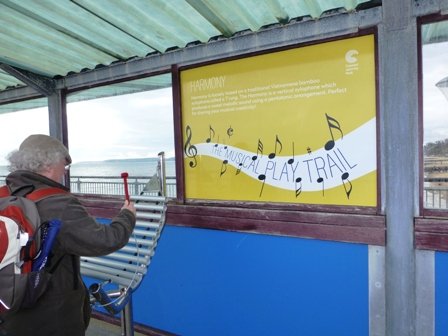 Steve couldn’t resist having a go on the musical play trail! 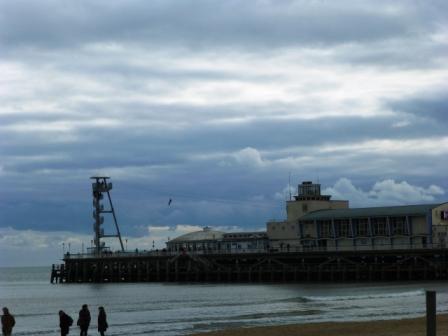 Brave souls ride the zip wire over the sea from the end of         Bournemouth Pier!

Finally, we arrive in Bournemouth, whose Pier has been in our sights for quite a while as we’ve walked, but it is only as we get nearer the we can the newly opened zip wire. Brave souls climb up a spiral staircase to the launching platform and then zip down, with shouts of ‘yeeee-ah’ over the sea to the landing platform. It doesn’t look very high, but we are assured it most certainly does when you’re up there and zooming over the sea is pretty scary. I don’t think we are likely to find out firsthand!

And, of course, this being England, there has to be fish and chips – and Harry Ramsden’s is perhaps the most famous purveyor of this national delicacy and there they are, right by Bournemouth’s pier, in a fine Art Deco building. 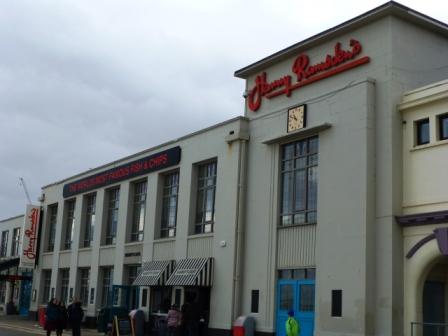 Our walk completed, we can ink in on our map of the British Coastline, another stretch that we have walked. Wonder where we’ll head to next?