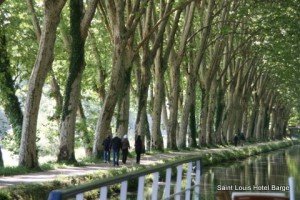 Guests from our hotel barge walking along the tow path

Each time that we moor in the village port of Meilhan-sur-Garonne, I draw our guests’ attention to an almost art nouveau concrete structure, about waist height and some twelve metres long; it is full of flowers, tumbling down over the concrete sides.  Quite a structure for a flower pot, one thinks.  Then you see the clue that tells of the reason it was built – there are rings attached to the front wall all the way along;  these were for tying up the draft horses that were used to pull the barges, and what is now a planter used to be a feed trough!

It is a reminder of the way the canal was used right up until the introduction of power driven barges in the early 1900’s.  Freight was efficiently transported for hundreds of miles, using as motive power nothing but draft horses walking steadily along the canal tow path.  Those were the days of total sustainability – the locally-bred horses were fed locally produced crops, nothing had to be imported. 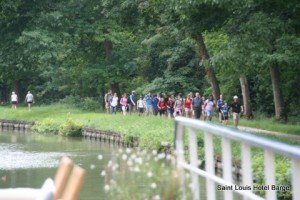 A large group of walkers on the tow path

Every canal therefore needed a tow path.  After the end of the era of horse-pulled barges, when motor driven barges took over, the tow paths in many places became disused and overgrown.  The Government of France came to a conclusion not many years ago, to the effect that the tow-paths represented a very significant resource that needed to be improved and developed for the benefit of the welfare and fitness of the population.  The Canal Garonne, “our canal”, was one of the first in France to be brought up to the modern standard, with the tow path cleared, levelled and surfaced.  It was completed between the cities of Bordeaux and Toulouse just three years ago, and it was done to such a condition that it is registered as a cycle path and we even see people rollerblading along it. 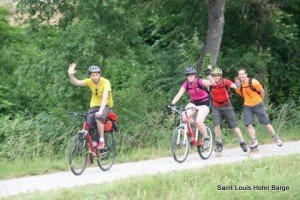 As was projected by the planners who designed and financed this facility, the increase in recreational use of the tow path has been very evident.  We now see long distance walkers and cyclists doing the route between the Atlantic and the Mediterranean, as well as people taking cycle rides from all the towns and villages along the way.  We also see the birth of cafés and restaurants, and low-cost accommodation, provided to take advantage of this new and healthy “slow travel” form of tourism.  We also see family groups, with children of all ages, taking to the tow path and camping along the way, having their own adventure and enjoying the beauty and ambiance of the canal.  It is great to see this newly encouraged shared use of the canal system, and usually we get a friendly wave from the cyclists, who are happy enjoying the environment. 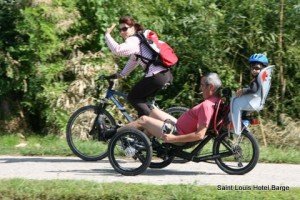 A recumbent trike and a friendly wave

What is remarkable is the sheer variety of bicycles that we see.  Not only are there the “normal” bicycles, but also every possible combination imaginable – recumbent bicycles, recumbent tricycles with the single wheel at the front, recumbent tricycles with the single wheel at the back, bicycles with trailers, tricycles with trailers, tandem bicycles – with our unparalled view of the tow path from the barge in the canal, we feel almost as if we are being treated to a “What’s New in Bicycles” exhibition!  Two unusual machines that I was unfortunately unable to photograph were a penny-farthing and a sort of streamlined two-wheeled pedal car, travelling extremely fast! 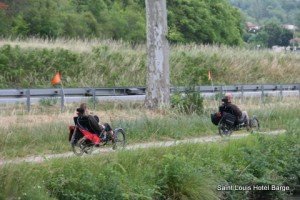 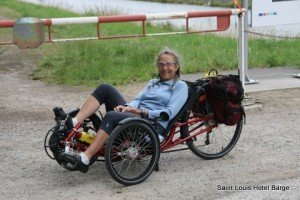 Finally, I would like to share with you two photographs of a school group that came our way some days ago.  The children stopped to sketch our barge, while their lunches were being carried by three donkeys being handled by the teachers.  Thus, as is so often the case, we see a cyclic trend in the use of the canal, with four-legged animals once again being used on the canal tow paths! 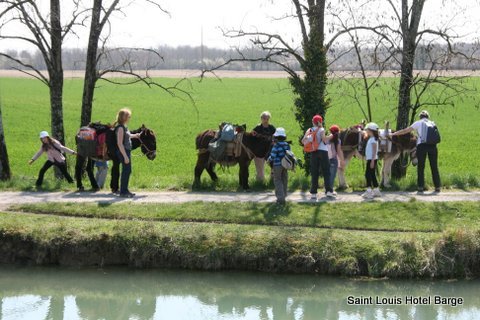 School party day out on the canal side - with their donkeys 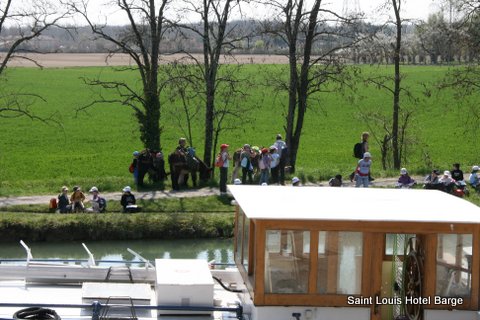