We now offer two Experience trips in France: The Luberon Experience in Provence and The Périgord Experience in the Dordogne. Our two base villages are just 300 miles apart, and the country, language, and many customs are the same. But the terrain, history, architecture, climate, and cuisine are each unique… these are two very different experiences!

One big difference is the prominence of two major rivers in our area of focus in the Périgord: the Vézère and the Dordogne. Our groups stay right on the Vézère and several of our days take us on and around these two rivers.

The Vézère River (below) runs about 130 miles, beginning in France’s Massif Central, flowing through the Corrèze department, and then into the department of the Dordogne. The Vézère continues southwest to Limeuil where it converges with the Dordogne River. 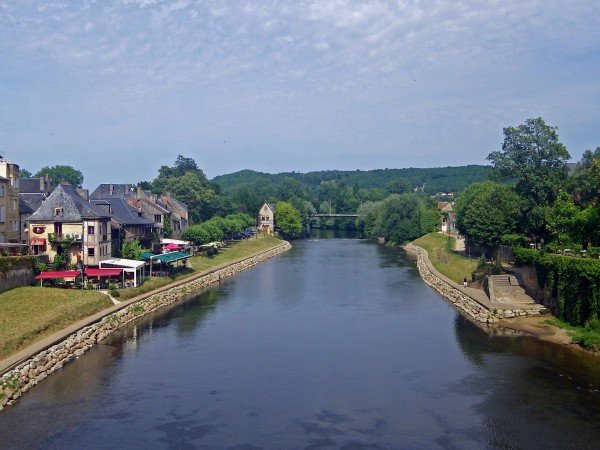 The Dordogne River (below) is one of the longest rivers in France, about 300 miles, beginning in the Auvergne department and flowing west through the Lot and the Dordogne. West of Bergerac, it joins with the Garonne River to form the Gironde estuary near Bordeaux. 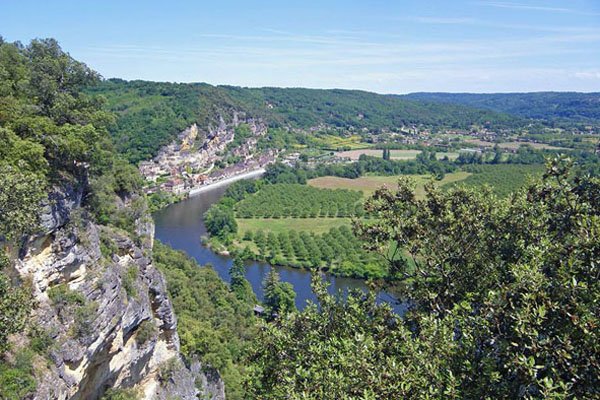 Both rivers are known for their meandering bends and loops and are bordered by high cliffs in several places.

Over thousands of years, these two rivers have drawn people to this area of southwest France. Prehistoric man settled around the lower portion of the Vèzére Valley more than 20,000 years ago. Today the Vèzére Valley is a UNESCO World Heritage site with 147 prehistoric sites and 25 decorated caves. Later the Celts and the Romans lived in this area. The rivers were important for communication and commerce, and in the Middle Ages, towns, villages and castles were built on their banks. The French and the English fought their Hundred Years War in the region around the two rivers.

Today the Vèzére and Dordogne rivers continue to draw people to the Périgord Noir who come to enjoy the history and beauty of this area. There are busy towns and villages on both rivers, as well as many quiet, less-discovered spots. Canoeing and kayaking are very popular activities in the warmer months, and there are places for swimming and fishing. The area also offers hiking, horseback riding, and cycling. Our family had a memorable two-week hiking trip around the Vèzére and Dordogne rivers in 2009, and we feel a personal connection to these rivers… as we travel with our groups, we still remember where we walked as a family. 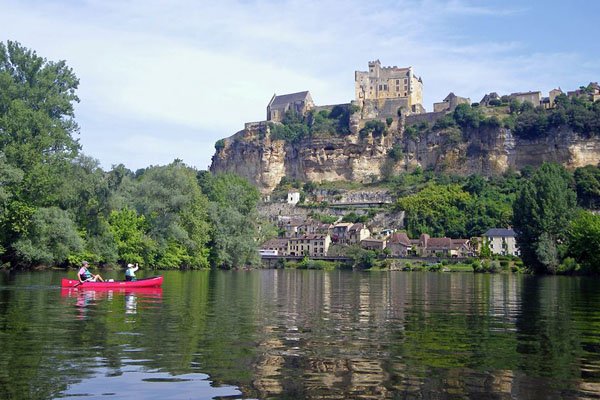 Our Périgord Experience groups get their first glimpse of the Vézère during our drive from the train station in Brive. We cross the river several times, pass by the waterfront town of Terrasson, and spot our first major castle, the impressive chateau de Sauvebœuf. Finally we arrive in our home village of Montignac where we’ll spend the week at a small hotel right on the river. Montignac is bisected by the river, the two sides of the village connected by two bridges. The older bridge was built between 1766 and 1777. 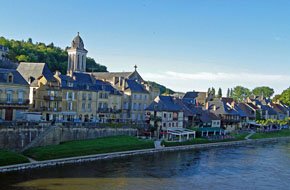 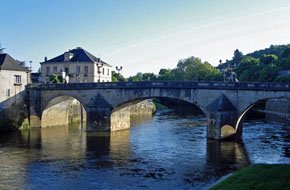 During our week we connect with the Vézère at several points to the north and south of Montignac. We return one afternoon to explore Terrasson, walking across the river on a 12th century bridge. The oldest parts of the Terrasson sit high on the hilltop overlooking the river. It’s a beautiful town, filled with flowers. 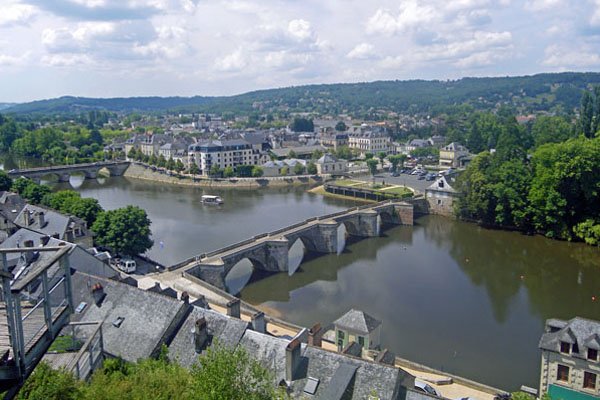 Wednesday afternoon we visit Chateau de Losse, just south of Montignac. Built in the 16th century, the chateau sits right on the banks of the Vézère, and the back terrace and the garden overlook the river. We can see the remains of an old lock and the place where goods were hauled up from boats below. 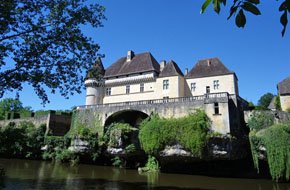 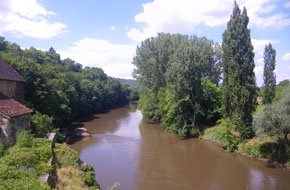 Later in the week we visit the Vézère at two points further south with archaeologist Steve Burman of Caves and Castles (also a member of Slow Travel Tours).  Below the prehistoric site of La Madeleine and the ruins of a medieval village built into the cliffs, the Vézère makes a two mile loop, the two ends separated by only about 300 feet.  It’s a very quiet part of the river, surrounded by farmland, with only occasional canoes passing by. People lived in this isolated spot carved into the limestone cliffs until the 1920’s. 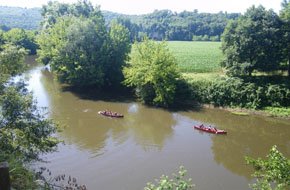 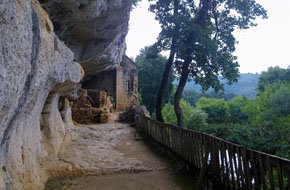 After our visit to La Madeleine, we stop for lunch at the quiet village of St. Leon-sur-Vézère, designated one of the “most beautiful villages in France.” A one-lane bridge crosses the river at St. Leon and our café is next to the bridge. In 2009 our family began our 130-mile walk right here, walking across the very narrow bridge. During our two-week walk, we crossed the Vézère just twice but crossed the Dordogne at least 10 times, maybe more, walking upstream into the department of the Lot. 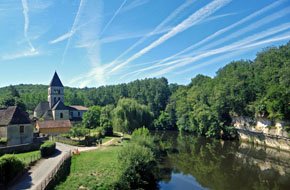 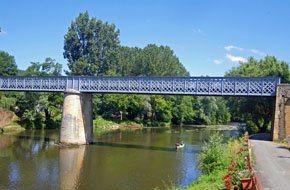 Although the Dordogne River is a bit further from our base in Montignac, one of our most memorable days is focused on the Dordogne valley. Our group takes a trip on the Dordogne, leaving from the village of La Roque-Gageac, either by “gabarre” boat or by canoe. Those who travel by canoe paddle 5.6 miles down the river, passing six castles along the way. 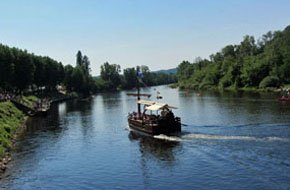 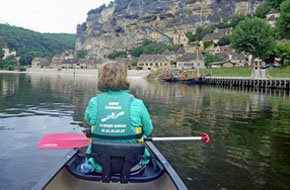 After lunch we all visit the Chateau at Beynac, sitting high above the Dordogne in its naturally defensive position, the village spilling down to the river. Richard the Lionheart once owned this chateau. From the top of the castle you can see for miles down the river in each direction. There are many beautiful views in the Dordogne, but for me, this one is the most memorable. 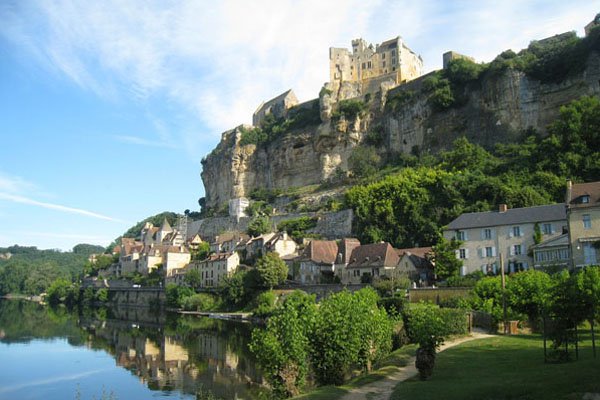 The Vézère and Dordogne rivers attract us with their history, beauty, and mystery… each an important part of our Périgord experience. If these two rivers could talk, what stories they would tell!

Interested in experiencing this unique area of southwest France for yourself? We’re offering three Périgord Experience weeks in 2015: June 27 – July 4, July 4 – 11, and July 11 – 18. See our website or contact us for more information. We’d love to have you join us!