In the summer months, when it can be quite hot, we very often moor our hotel barge the Saint Louis in the tiny port of Pommevic, between Moissac and Lamagistere.  There is a full canopy of trees, and it is pleasant to get some shade in the heat of the day.  Generally, no other boats are moored there, and we have for company the occasional boat passing between the locks  –  and a steady trickle of Pilgrims passing along the towpath. 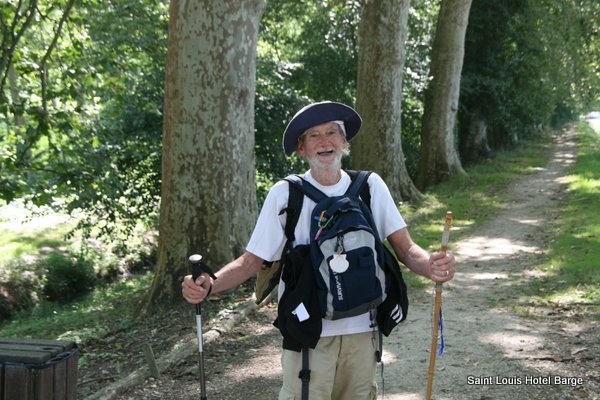 A pilgrim at Pommevic - complete with stave and scallop

For a distance of some fourteen kilometres between Moissac and Pommevic, one of the main pilgrimage routes to Santiago di Compostela passes along the canal.  This is Christendom’s third most important place to visit, after Jerusalem and Rome, and it is certainly the most important Christian pilgrimage in the sense of a holy destination reached after a long-distance trek.

In the early years of the 9th century, according to tradition, a hermit monk called Pelayo was led by a star to the burial place of St James the Apostle, and his find confirmed as being the remains of St. James by Todemito, bishop of the most westerly diocese in the Iberian peninsula.   This part of present-day Spain is the region that James chose to come and spread the Word after the death of Christ, and it was to this coast that his remains were brought in 44 A.D., after he was martyrised by Herod Agrippa.  There is no hard evidence that the remains found by Pelayo were indeed the remains of St James the Apostle, but the evidence was sufficient at the time for the Church and the State to give immediate acceptance of the claim.  Perhaps the absence of hard evidence does not matter – the fact remains that there was established at the place a shrine to St James the Apostle, and very soon a pilgrimage to the shrine developed.

The pilgrimage to the shrine developed within the population of Iberia, and then in the year 947 the first foreign pilgrim arrived – he was the Bishop of Puy, who had travelled over the Pyrenees from France.  Between then and the fifteenth century the pilgrimage was busy, and indeed it was at its busiest in the twelfth century.   Imagine, if you can, the conditions that these pilgrims had to endure at that time, and the risks they took.  Long staves, for protection, were part of every pilgrim’s essential equipment, as was a scallop shell displayed on the body, for identification.  (The scallop shell is the emblem of St James, the “logo” of the pilgrimage, and  the French for scallop is “coquille St Jaques”  –  “St James’ shellfish”)  Many of today’s pilgrims keep the tradition going by carrying a stave and displaying a scallop shell. 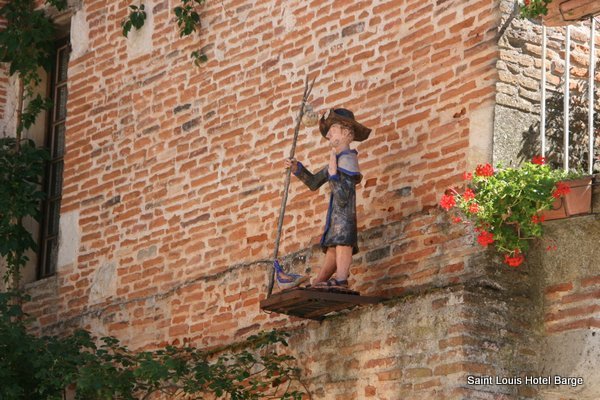 A pilgrim statuette in nearby Auvillar

I am often asked where the pilgrimage starts.  The simple answer is that there is no starting point – there are feeder routes across Europe, from Ireland in the west to Austria and Poland in the east.  Hence, the pilgrims represent a multi-cultural and a multi lingual society.  Although the pilgrimage is clearly of Christian origin, there are many people who are doing it as a classic long-distance walk with no religious connotation.  It is essentially Slow Travel!

As part of the parallel between the pilgrimage and Slow Travel, it is interesting that one of the very first Traveller’s Guide Books was written as a guide to the pilgrimage – the Pilgrim’s Guide “Codex Calextinum was written in the 12th century!

It is interesting to discuss with today’s pilgrims their motives for what they are doing.  I very often hear from people that their motives, their rationale, indeed their whole way of thinking have changed along the way.  There is the classic statement “One’s pilgrimage does not end in Santiago – it begins there”.  Perhaps this is a bit like Slow Travel, in which you have the time and the surroundings to be able to reflect on the world around you.

Meanwhile, back at Pommevic, the pilgrims can enjoy the fact that they only have 1,200 kilometres left to go! 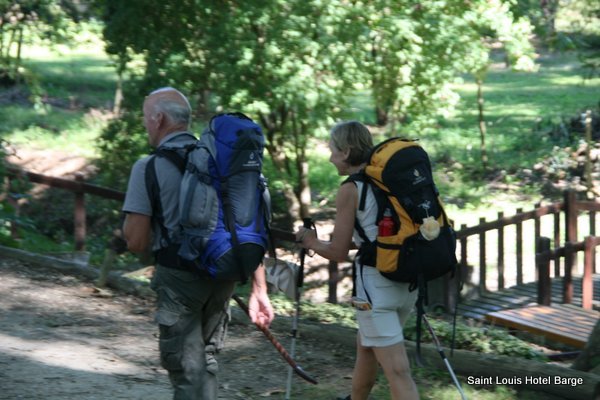