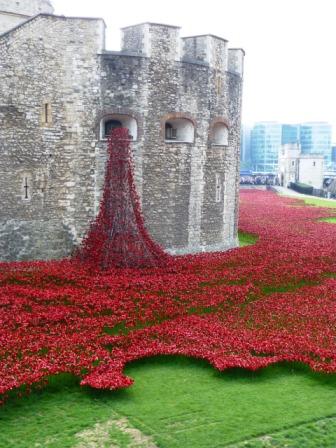 Poppies cascading into the moat

Poppies are symbol of Remembrance in the UK – the 11 November is known as Armistice, Remembrance or Poppy day.  Remembrance Sunday is the second Sunday in November, the Sunday nearest to 11 November – whereas in France an act of remembrance is always held on the day itself, with the Maire of each commune reading a message from the President to a gathering of local people, many of whom suffered losses during this dreadful war.

During the First World War, on the 11th hour of the 11th day of the 11th month in 1918, the guns of the Western Front finally fell silent after more than four years of continuous warfare. In many parts of the world, people observe a two-minute of silence at 11am on 11 November.

Poppies in the Moat – or to give it its official title ‘Blood Swept Lands and Seas of Red’ – is the brain-child of ceramic artist Paul Cummins and theatre stage designer Tom Piper. It was unveiled on 5 August 2014, one hundred years since the first full day of Britain’s involvement in the First World War.  Cummins’ first idea was to keep the whole thing secret and unveil it on 11th November, but it soon became apparent this was both impractical and impossible and so the project has unfolded over the months with over 8,000 willing volunteers ‘planting’ the poppies, starting back in August. 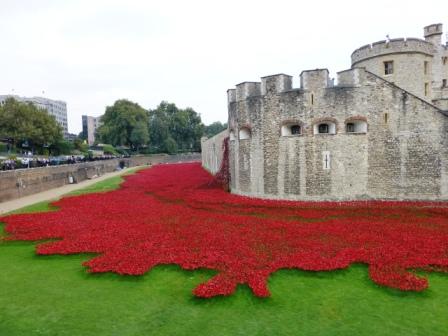 Part of the sea of poppies around the Tower of London

The author of ‘Blood Swept Lands and Seas of Red’ is unknown, but it was this poem that inspired Cummins to create his masterpiece.

The blood swept lands and seas of red,
Where angels dare to tread.
As God cried a tear of pain as the angels fell,
Again and again.
As the tears of mine fell to the ground
To sleep with the flowers of red
As any be dead
My children see and work through fields of my
Own with corn and wheat,
Blessed by love so far from pain of my resting
Fields so far from my love.
It be time to put my hand up and end this pain
Of living hell. to see the people around me
Fall someone angel as the mist falls around
And the rain so thick with black thunder I hear
Over the clouds, to sleep forever and kiss
The flower of my people gone before time
To sleep and cry no more
I put my hand up and see the land of red,
This is my time to go over,
I may not come back
So sleep, kiss the boys for me

The poppies will encircle the Tower of London creating not only a spectacular display, but a location for personal reflection – and it certainly does that for individuals such as us.  It is such a poignant sight – and we feel humbled just to have seen this symbolic outpouring of flowers and shared some of the emotions it evokes. There have been far more prestigious visitors than us – not surprisingly, the Queen & Prince Phillip visited and a yeoman warder laid the royal wreath on a small mound.  During his visit, Prince Harry requested an opportunity to return incognito to plant poppies – with whom in mind we will perhaps never know, but it was obviously a poignant visit for him. Also for the Duchess of Cambridge who had tears in her eyes as she surveyed the scene.

As we write, this amazing and complex project  is still ‘work in progress’ – it will finally total 888,246 ceramic poppies – one for each British and Colonial soldier lost during the 1914-18 war. It really is an awesome sight – each flower represents a man’s life – a loved one lost, a family decimated.  Thousands upon thousands.  Each evening there is a ceremony, the Last Post is sounded, dedications read and further poppies are ‘planted’ – each one dedicated to an individual.   By November 11, the poppies will link up around the 16 acre former moat – a sea of red, representing blood split during this ‘war to end all wars’. What a great shame that has proved not to be the case. 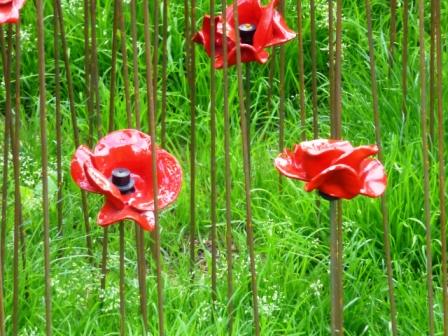 Each poppy is unique and hand crafted

over 3 days to complete. A team of 40 have been working on them since January.  It was hoped that millions of pounds would be raised for charity from the sale of the poppies which will be individually packaged and despatched later in the year – and support for this was such that they quickly sold out, so this goal will be achieved.

Unfortunately, we cannot be in London on the 11th November, but if you are able to be there this is what is planned for the final ceremony: 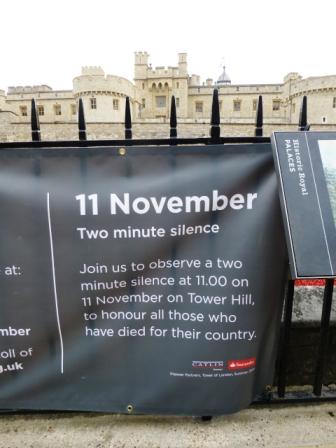 The closing of the Roll of Honour and a 21 gun salute, the planting of the final poppy in the moat followed by the playing of the Last Post by a lone bugler.

Spectators can gather on Tower Hill and events will unfold as follows:

One hundred years on – many things have changed as can be seen from this report of the First Two Minute Silence in London (11 November 1919):

The first stroke of eleven produced a magical effect.

The tram cars glided into stillness, motors ceased to cough and fume, and stopped dead, and the mighty-limbed dray horses hunched back upon their loads and stopped also, seeming to do it of their own volition.

Someone took off his hat, and with a nervous hesitancy the rest of the men bowed their heads also. Here and there an old soldier could be detected slipping unconsciously into the posture of ‘attention’. An elderly woman, not far away, wiped her eyes, and the man beside her looked white and stern. Everyone stood very still … The hush deepened. It had spread over the whole city and become so pronounced as to impress one with a sense of audibility. It was a silence which was almost pain … And the spirit of memory brooded over it all

(From a report in the Manchester Guardian, 12th November 1919)

But so many things have not changed.  Will we ever learn?