On top of Monte Serra stands a forest of telecommunication masts. Ugly as they are, they’ve often saved me from losing my way when traversing the Lucca plain on its tangle of threadlike roads. 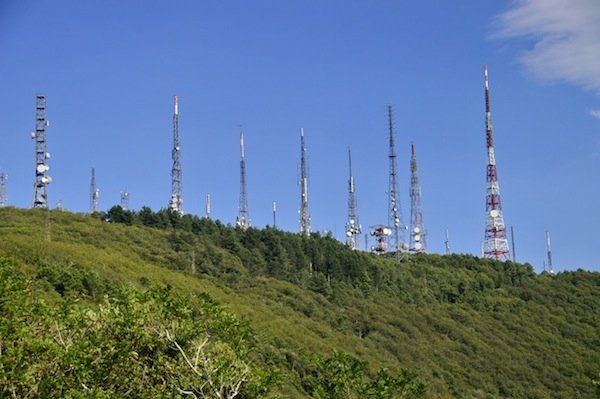 A useful blot on the landscape (photo: Klaus Falbe-Hansen)

They’re a beacon for the organic olive estate where I take my guests to pick and press olives and which lies at the foot of the mountain. 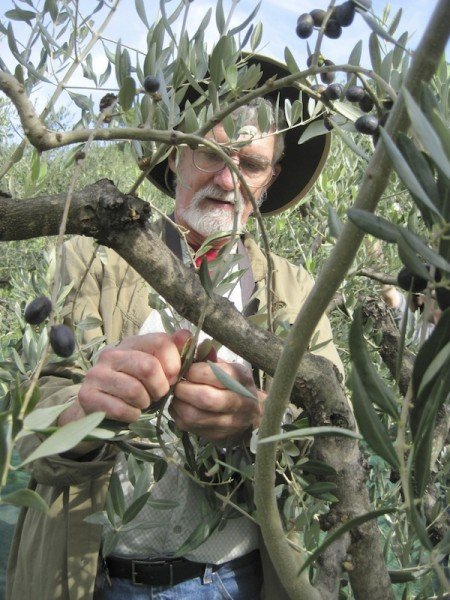 Monte Serra at 917 m (3008 ft) is the tallest peak in the rather puny chain called Monti Pisani (Pisan Mountains). Until a month ago all I knew about this clump of hills was that the ridge formed the boundary between the former republics of Lucca and Pisa, and that Lucca had lucked out by being on the east side which is rich in natural springs. The aqueduct built by Lorenzo Nottolini between 1823 and 1833 carried pure spring water to the drinking fountains of Lucca. (The same springs are now piped underground and the water is purified by ultraviolet light.) 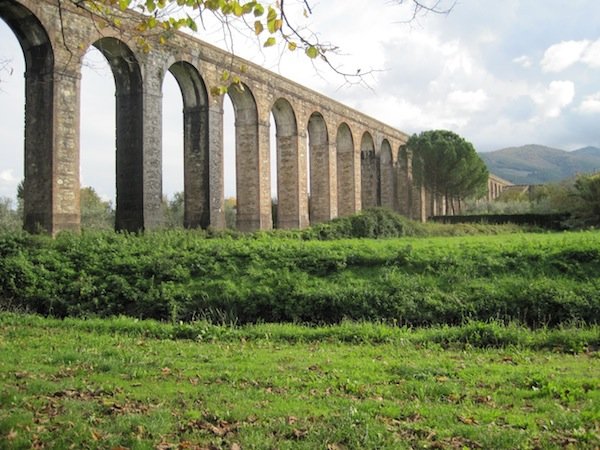 My truffle hunts around San Miniato, in the Province of Pisa, had shunted the Monti Pisani up my research list, because my route to the truffle woods runs along the old Via Sarzanese, an ancient pilgrimage path along their eastern base. 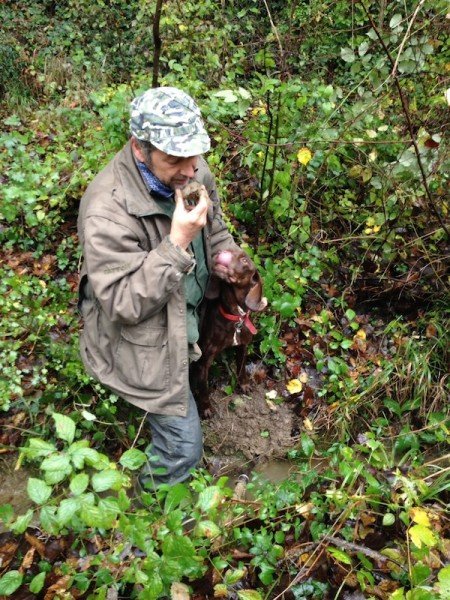 White truffles are in season

The mountains arrived at the top of the list in August when I was looking for outings for friends, my willing guinea pigs on my exploratory forays. I’ve been three times, twice making an entire circuit of the mountains in an anti-clockwise direction, and once cutting through the middle to inspect the telecommunications masts up close. 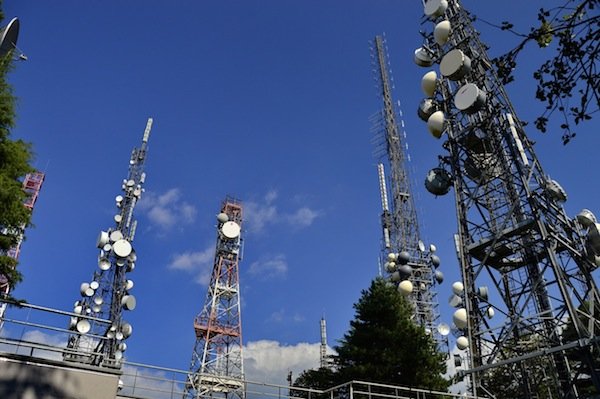 Maybe they have an industrial beauty… (photo: Klaus Falbe-Hansen) 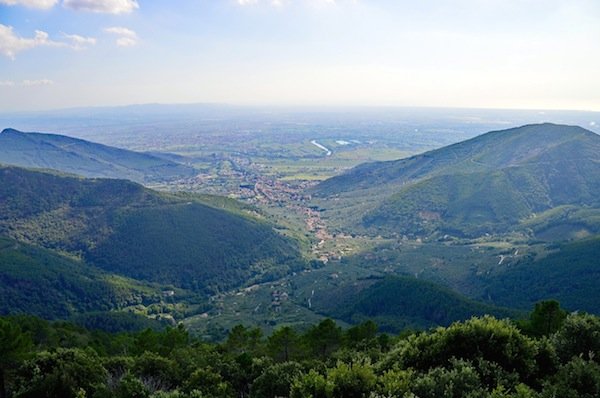 …but better to look in the other direction. (photo: Klaus Falbe-Hansen)

The masts probably won’t figure in future tours, but everything else definitely will. Here’s a brief preview of tours to come.

Starting from Lucca on the old road to Pisa along the Serchio River, you merge into the faded grandeur of an earlier epoch. You slow your pace and almost believe your car is a horse-drawn carriage. 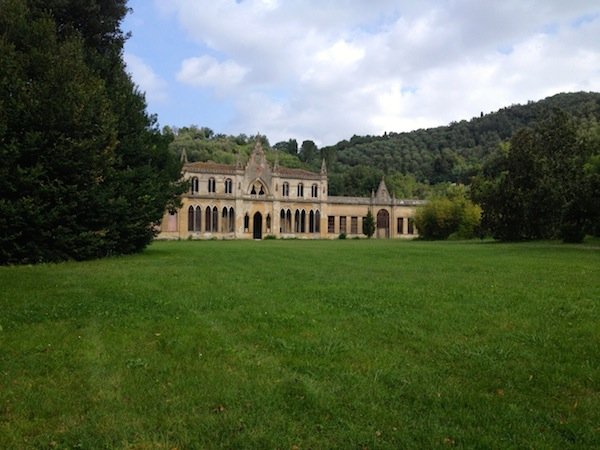 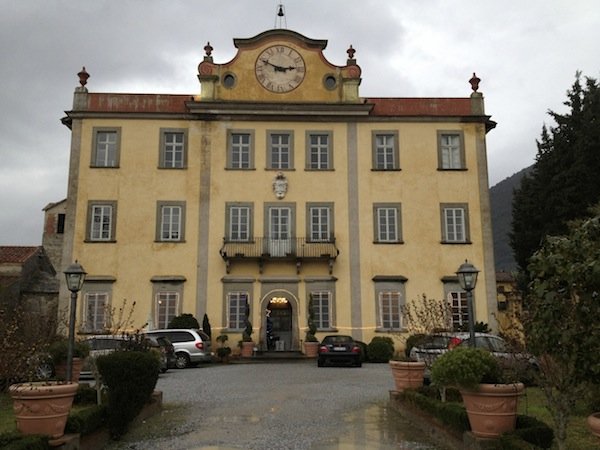 Emerging at San Giuliano Terme with its five-star spa, you cross the newer road between Lucca and Pisa. Fields of reeds testify that you’re now on the floodplain of the Arno River as it meanders lazily from Florence to Pisa. At Campo you’re convinced that the only pine nut factory in Italy that carries out the whole process from harvest to clean nuts has gone out of business. It turns out that the ugly single-storey factory, discreetly hiding behind a row of houses, only opens between October and April while the nuts are being harvested, and the owner shows us the hibernating machinery. Pisan pine nuts are to be sought out, and the ones you can buy here are in a class of their own. Note to return in October; could be combined with the olive harvest and truffle hunts. 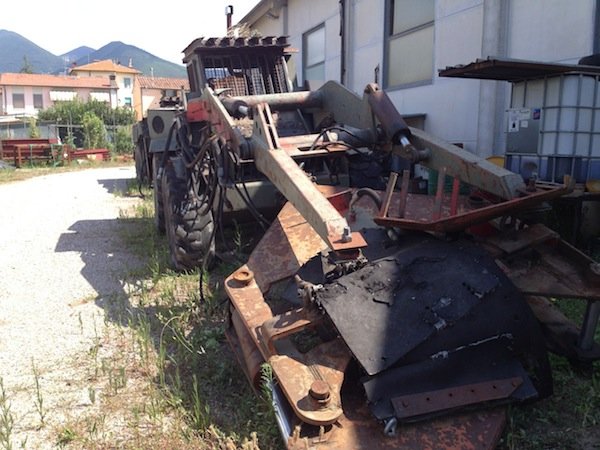 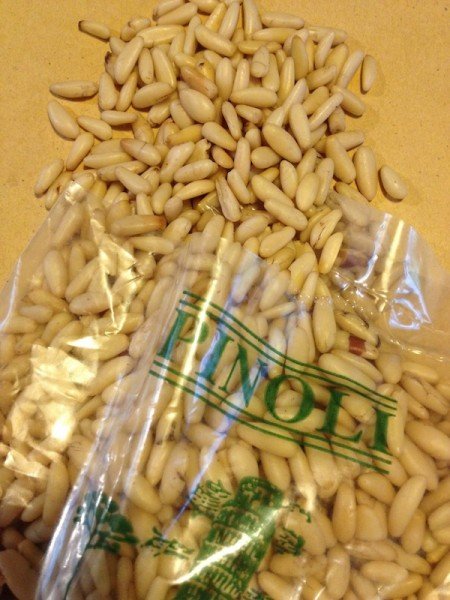 Next stop the Certosa of Calci, a house of the cloistered monastic order of Carthusians founded by Saint Bruno in 1044 at Grande Chartreuse. When it was inhabited by monks, they lived in seclusion, but there was nothing ascetic about the architecture. 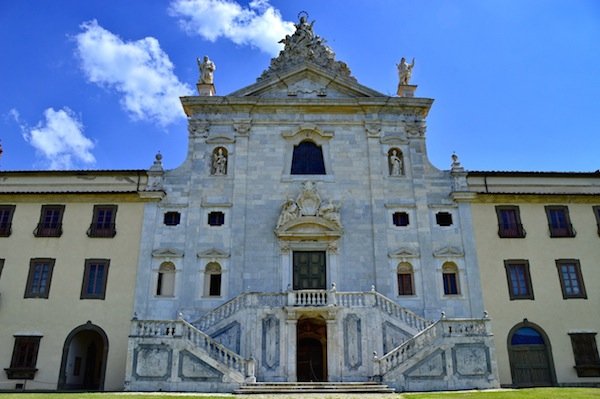 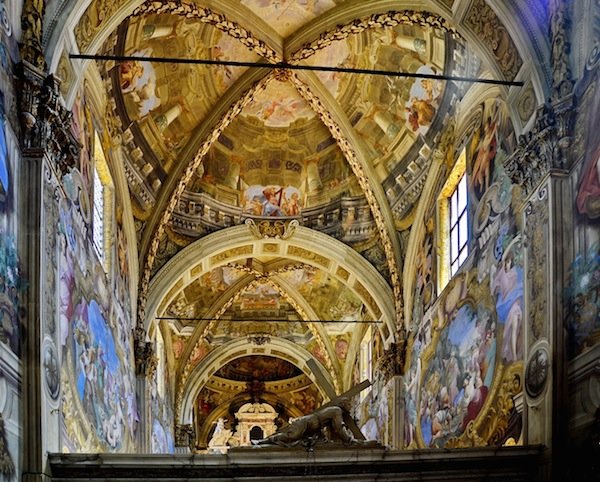 The blinding richness of the interior (photo: Klaus Falbe-Hansen) 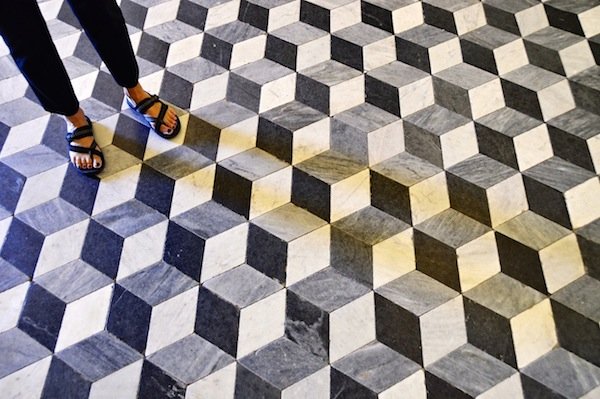 The floor of each chapel has a different design formed of marble tiles. (photo: Klaus Falbe-Hansen) 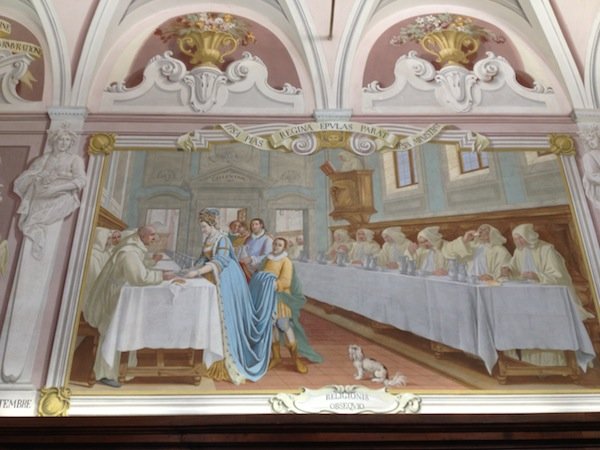 Half the building is home to the Natural History Museum of the University of Pisa. Besides the new geological and cetacean galleries, you’ll be enchanted by the museum of a museum, the 19th-century eclectic displays preserved in their mahogany cases. 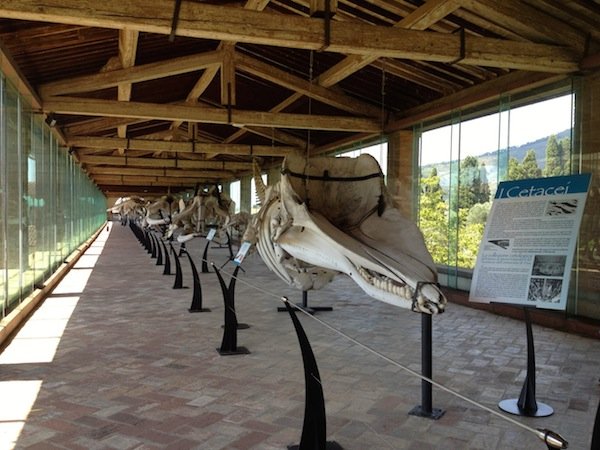 Cetacean gallery on the roof 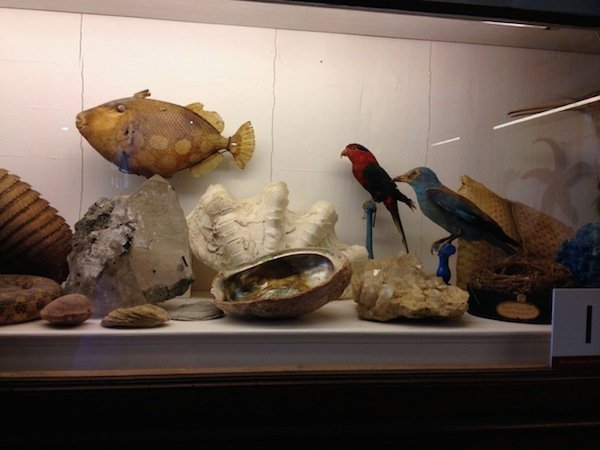 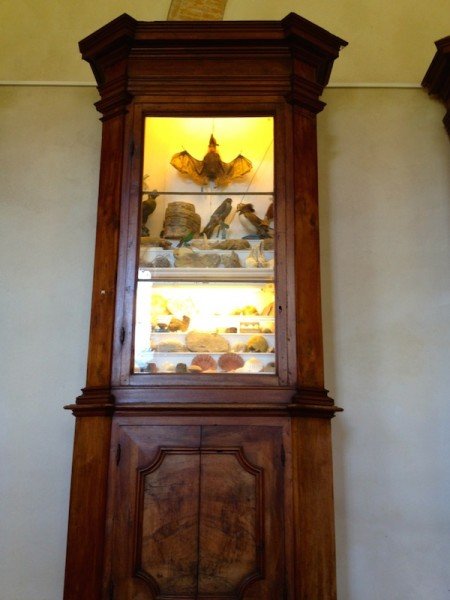 It’s lunch time and the guide at the Certosa recommends Il Conventino at Tre Colle, a village with a church and a few houses near the top of a stream valley with a view to the sea. He knows his restaurants; it’s good enough to return a second time (and third and fourth). 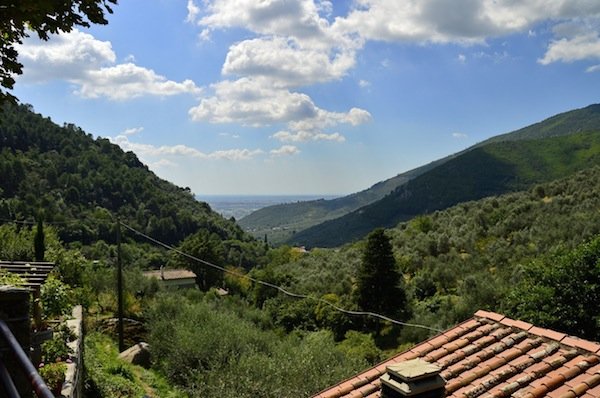 Continuing anti-clockwise around the base of the hills, you hurry through a chain of strip developments to San Giovanni alla Vena and the last remaining potter in a ceramic tradition going back to the Middle Ages. Here is the source of the ubiquitous green spatter ware I see in every ethnographic museum in Lucca Province, and which I’ve been trying to track down for years. 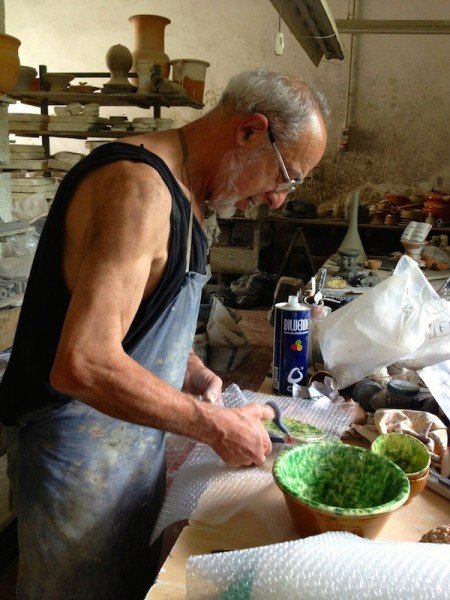 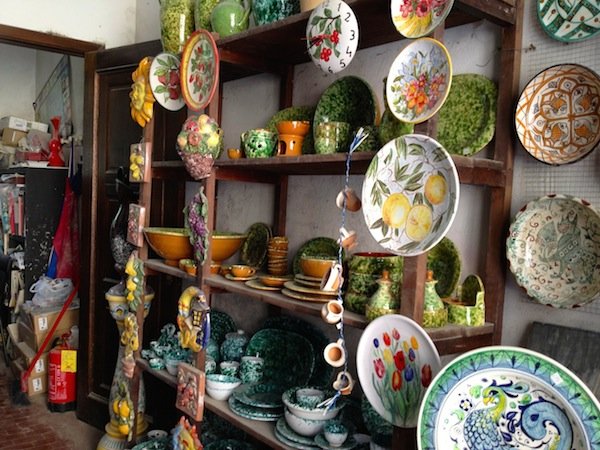 A pot, dish and ornament for every occasion

After giving you time to tiptoe among the clutter and select a few pieces to buy, Guido sends you round the corner to two historical flood control buildings, one dating at least to the 14th century and the other from the 18th century. Due to Leonardo da Vinci’s successful deflection of the Arno, the once necessary floodgates now hold back only a tide of industrial waste. 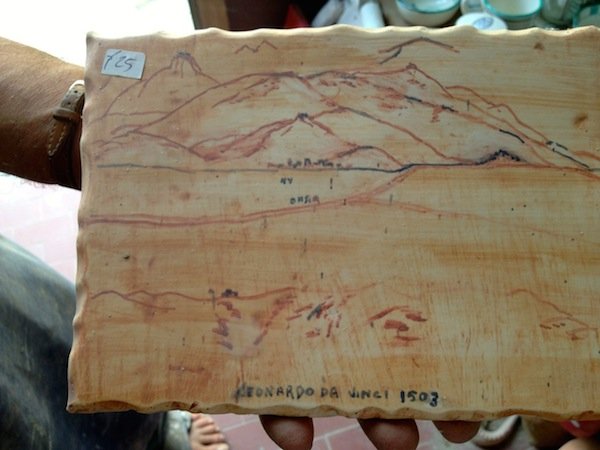 Leonardo’s plan captured by Guido on a tile 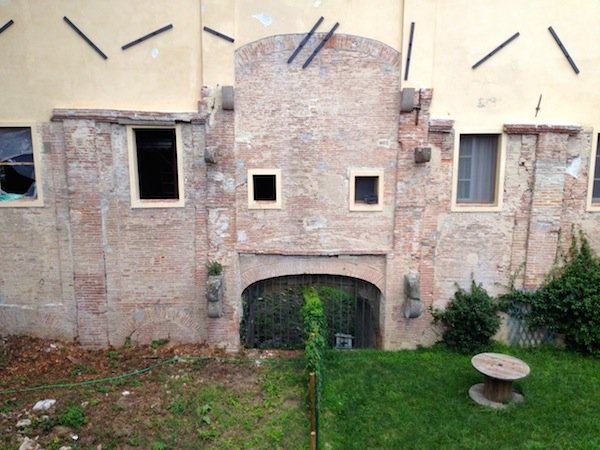 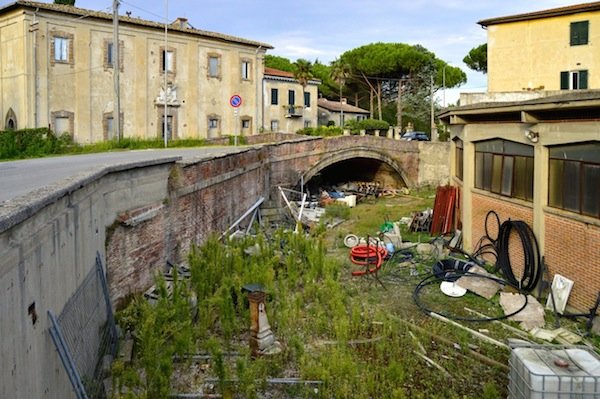 It’s a short drive to Vicopisano. Once the key to Pisa’s defences against Lucca and Florence, Leonardo’s engineering feat left it high, dry and useless. The castle designed by Brunelleschi has been saved the same fate by the dedicated guide Giovanni Fascetti, who has given it a spit and polish, and conducts a fascinating tour from the dungeons to the tower top. He isn’t always there, but now I’ve got his mobile phone number. 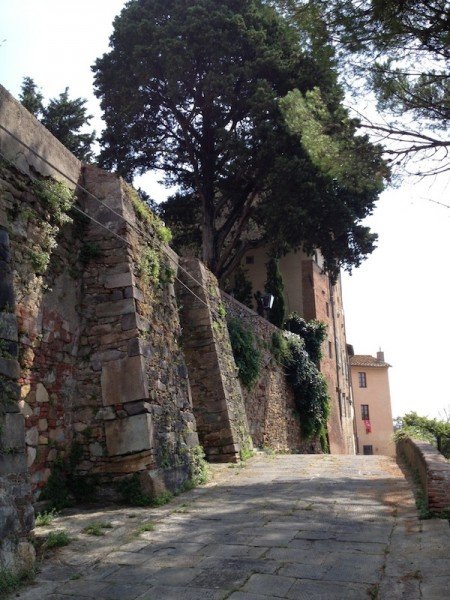 Road to the castle at the top of Vicopisano 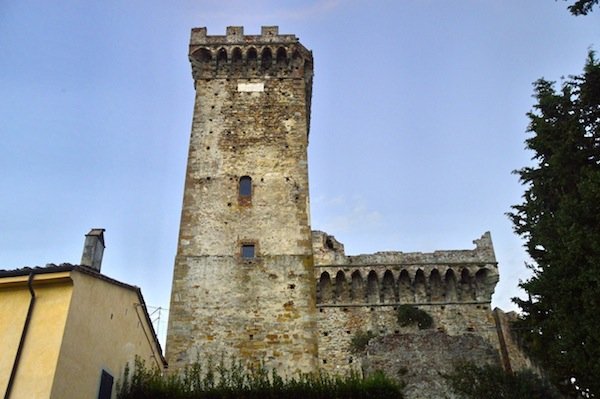 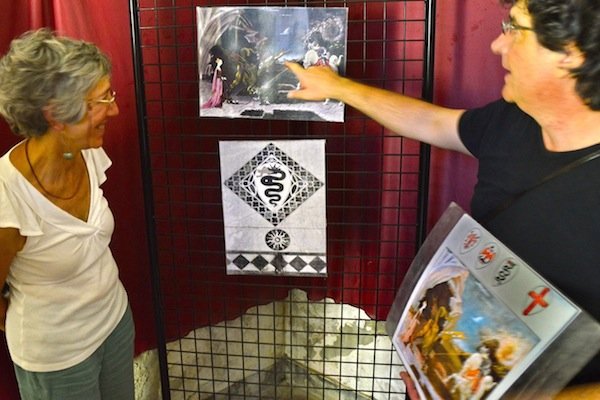 Giovanni explains his interpretation of Uccello’s painting of St George and the Dragon (photo: Klaus Falbe-Hansen) 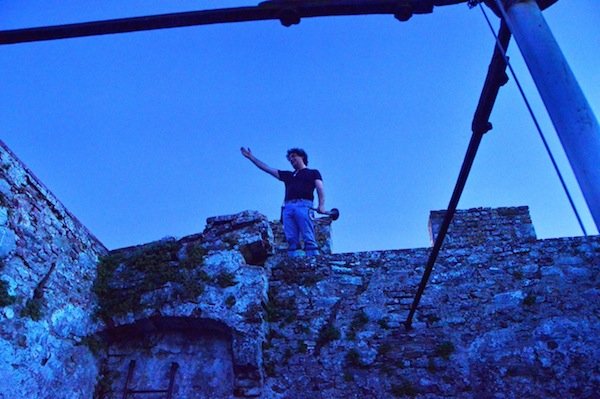 Also not to be missed at Vicopisano is the Church of Santa Maria. 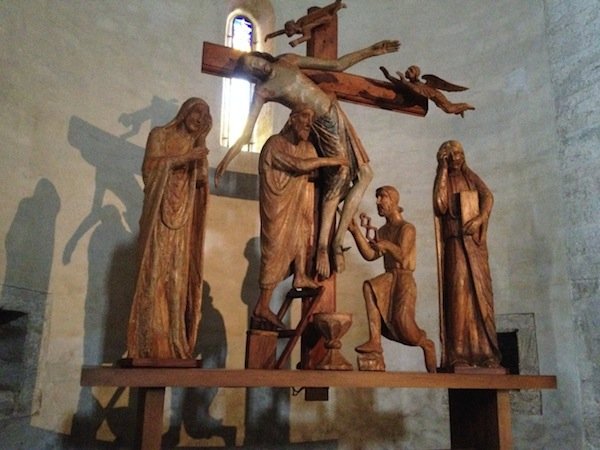 Still half an hour till a respectable Italian dinner time. Venturing past the cemetery, a sign to Frantoio Vicopisano (Olive Press of Vicopisano) beckons. 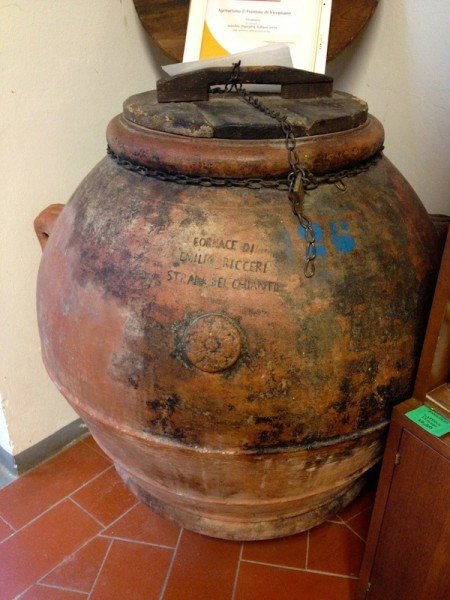 The tour by the enthusiastic owners lasts longer than you expected. Another note to come back in October during the olive harvest.

An hour later you enter Paolo Ricci’s welcoming restaurant L’Osteria di Ceppato where the seafood tastes like a million euros but costs so little you wonder whether there’s a zero missing at the end of the bill. The aromas of the meat dishes on the neighbouring table presage another visit. 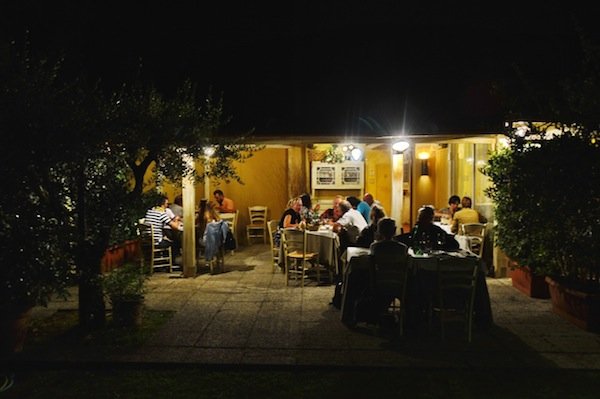 Completing the ring, you arrive at Lucca on the Via Sarzanese. Just before crossing back into Lucca Province the huddle of houses named Caccialupi, ‘Hunt the wolves’, may raise a smile. Not an activity you’ll find on my tours.