One of the great things about our area of south west France – the Vezere Valley, in the Dordogne – is that there is always somewhere new to explore and we take every opportunity to do just that.

For example, a good friend of ours wanted to visit Roman Provence – and Steve, as archaeologist and historian (what period doesn’t he know about?!), and I thought this would be a great opportunity to do some more exploring ourselves.

We had to take in the famous Pont du Gard – what an awesome sight this is! Now enclosed within an area of parkland to control the visiting, this magnificent structure was a vital link in the Nimes aqueduct which supplied water to the town. It was originally 360 metres long of which 275 metres now remain, 12 arches having been destroyed in the 12th century. It originally extended over 50 kilometres and is an amazing feat of engineering. It is amongst those with the smallest average gradient- an amazing 25 cm over a kilometre stretch. 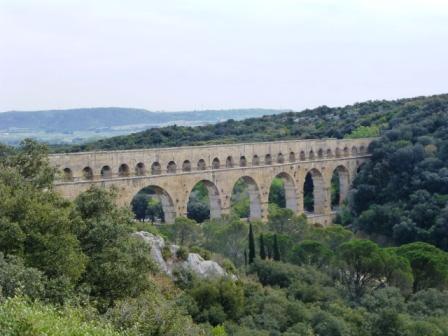 Next we went to discover a much neglected stretch of Roman road – the Via Domitia which stretched from the Alps to the Pyrenees and beyond. It is hard to understand why such important archaeological sites are allowed to be swallowed up by quarries! But some features still remain such as these original mile markers near Tarascon which have been rescued. 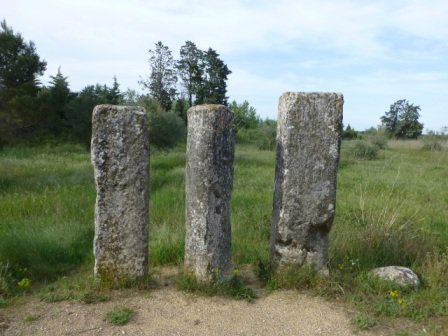 Mile markers from the Via Domitia

There is also a preserved section of the original road surface that can be seen (and walked on) at Narbonne. 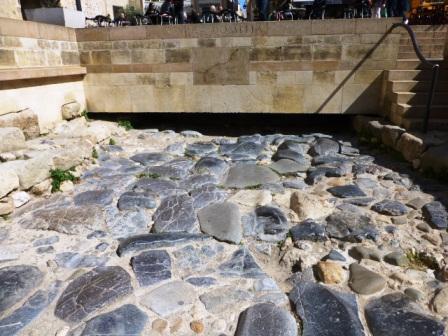 Preserved section of the Via Domitia in Narbonne

We couldn’t pass up an opportunity to see the amphitheatre in Arles – what an amazing structure and so well preserved too. 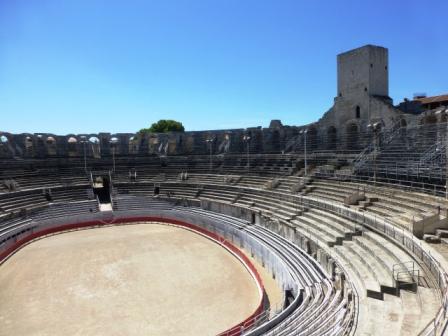 From the huge grandness of the arena to the small carved details, it cannot fail to impress. It was constructed at the end of the 1st century AD, at more or less the same time as the Colosseum in Rome, for the same reason – gladiatorial combats – and to show how Romanised Provence was !! 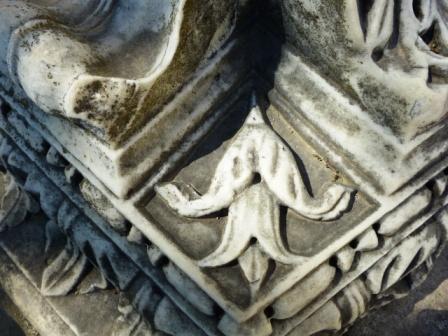 The beauty is in the detail

And, of course, this is France, so lunch has to feature in the day! What better than with a glass of wine and an ancient amphitheatre as a backdrop. 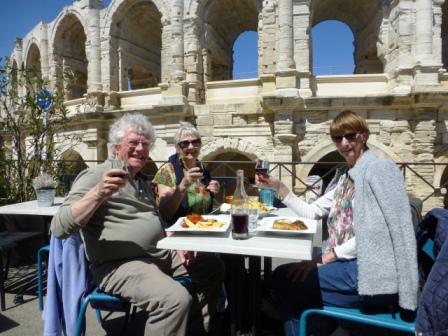 Suitably fortified, we head off to the Roman theatre at Orange – wow!! This has to be seen to be believed – you can judge from the size of the people in the photo, just how vast it is. The stage area has now been covered both to protect and preserve it and also to enable it to be used for concerts which it is regularly. What an experience that would be – one for our ‘must do’ list. 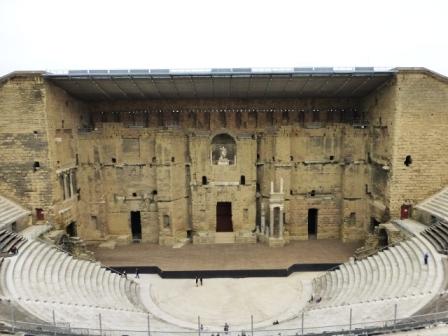 The magnificent Roman theatre at Orange

Walking through the old town to our next monumental treat, the Triumphal Arch, we passed this quirky floral shop. What fun! 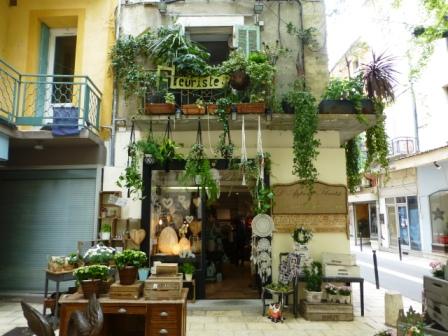 It is not such a clear line of sight now, but originally the theatre would have easily visible at the end of the road – what an impressive sight that must have been. 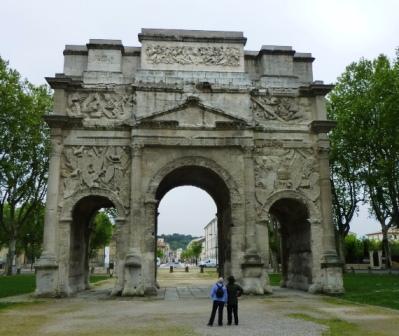 This is yet another monument in an amazingly good state of preservation as can be seen from the quality of the carvings. They show Celtic arms and armour and wrecked Egyptian ships – Roman triumphs of Julius Caesar and Augustus. 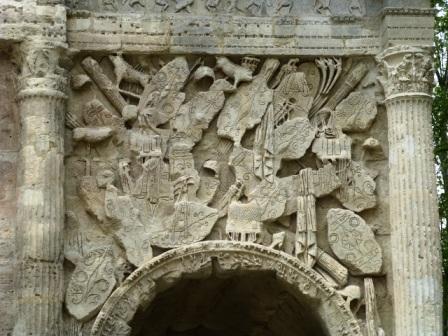 Section of the many carvings on the Triumphal Arch, Orange

We also like to grab opportunities between our tours – we usually regard Limoges as a convenient airport to use when flying to and from UK (and, of course, they have flights between various other countries too) plus it is on the direct rail line between Paris Austerlitz and Brive la Gaillarde which is the travel route for many of our tour members. However, its real ‘claim to fame’ is its porcelain as you probably know. So we decided to stopover and explore.

First we took a tour around the Bernardaud porcelain works. 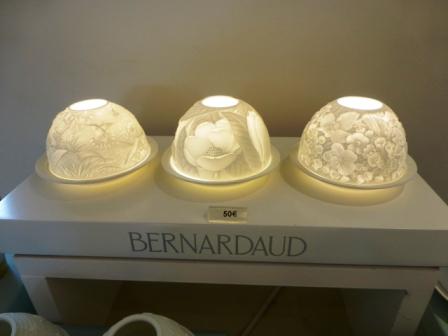 Porcelain lamps from the Bernardaud factory in Limoges

We were amazed at how quickly the slip (liquid porcelain) dried when poured into the mould to form a handle for example. This is then applied to the body of the jug using slip to key the two components together. It is then air dried before being glazed and finally fired in a kiln. 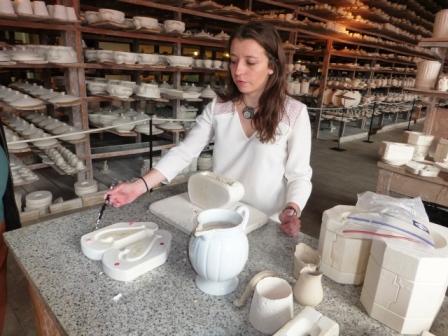 Demonstration of porcelain making at the Bernardaud factory, Limoges

It was great to see the manufacturing process still being continued today, but to see the elaborate pieces for which Limoges porcelain is renowned, we headed to the National Museum. 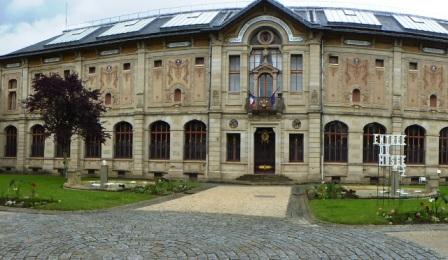 What a magnificent building! Built at the very start of the 20th century, it is oozing with Art Nouveau character and is a fitting setting for the wonderful collection.

We couldn’t miss a chance to look at the cathedral. As well as the magnificent structure itself, built at different phases through the Medieval and Baroque periods, in the Bishop’s Palace next door it also houses a series of models which show the development of Limoges over the centuries. 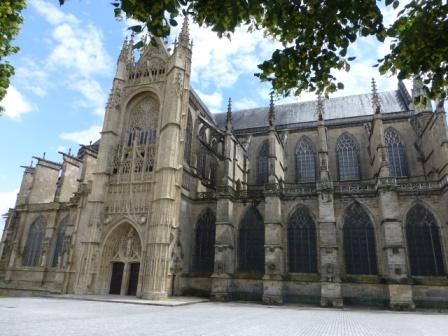 It certainly has changed from Roman days as you can imagine! 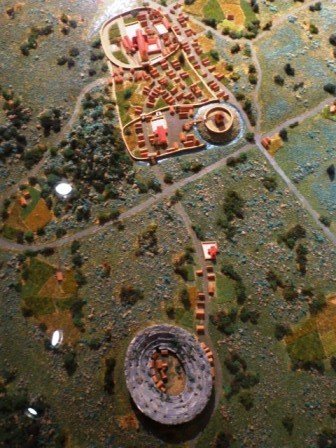 On a recent driving trip to England (we like to think of them as adventures, not just journeys!), we took a step back into the Middle Ages by making a visit to Guedelon a ‘medieval’ castle that is being built from scratch using original materials and techniques (as far as is possible these days). But that’s another story…… 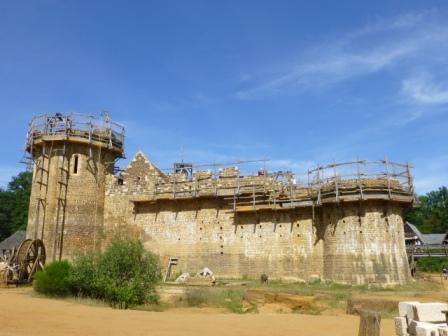 Guedelon – a ‘medieval’ castle in the making

So not only do we get to live in the midst of some of the most impressive cave art in the world – Lascaux, Font de Gaume, Les Combarelles, Cougnac and Rouffignac for example,  the Dordogne lays claim to 1001 chateaux (castles). But we have so many other places to explore right on our ‘doorstep’ – or ‘a deux pas’ (at two steps) as the French would say!