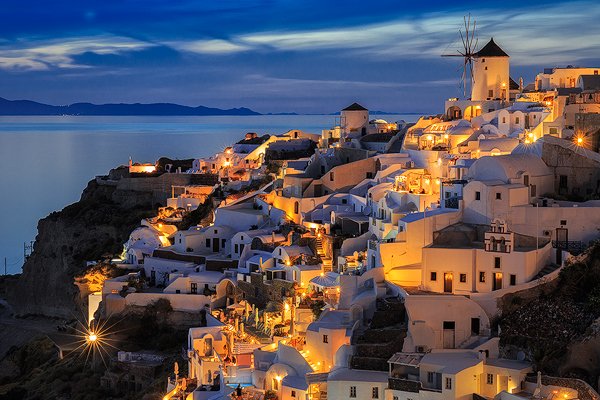 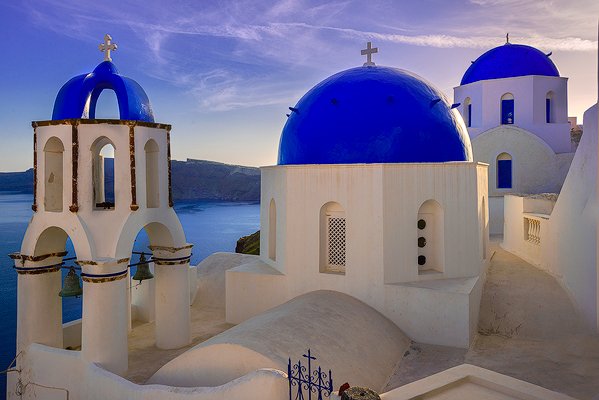 We just completed our first photo tour on the island of Santorini. The result: Great images and happy clients. 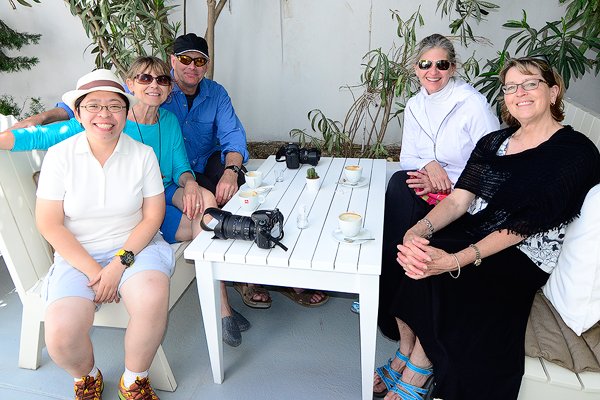 This volcanic island on the southern end of the Cyclades Islands in the middle of the Aegean Sea has fascinated me from the first time I visited in 1981. Its early inhabitants, the Minoans, who arrived from Crete between 2000 BC and 1600 BC, experienced one of the largest volcanic eruptions in recorded history. What is so fascinating and stunning about Santorini is that it sits on the top rim of a giant volcanic crater. The whitewashed villages of Thira, Firostefani, Imerovigli and Oia cling to the upper reaches of steep hillsides and cascade down towards the emerald green Mediterranean Sea. Postcard-blue domed churches dot the scenery. The interior areas of the villages are only accessible by foot unless you prefer the ancient mode of donkey travel. While most of the donkeys are used for the tourist trade some actually still haul building supplies into the difficult to reach areas.

The labyrinth of winding paths that go up and down, left and right, make for excellent strolling with a camera for the photography enthusiast — a visual surprise lurking around each bend. 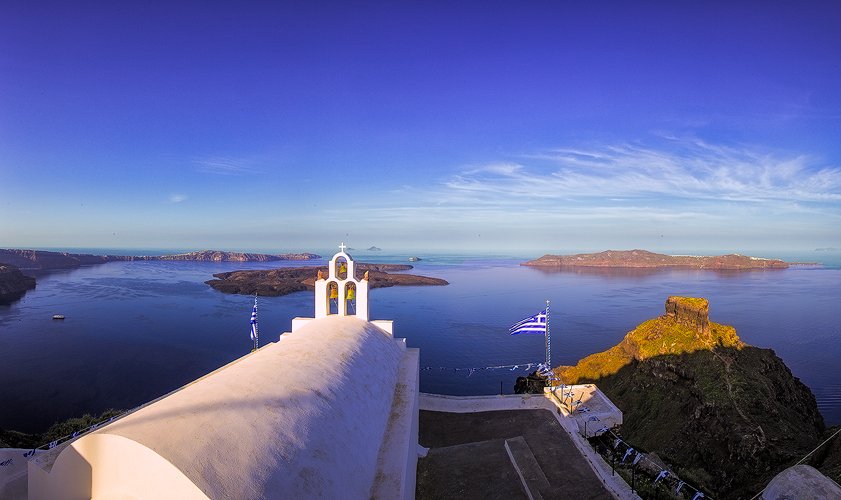 The view from Imerovigli.

This small island, only 25 km from north to south, is the perfect size to explore in 1 week. At first we thought that 7 nights might be a bit too long but as the tour progressed we all agreed that it was just right. Not too rushed with a good mix of photography, museums, walking and, of course, fabulous eating. We found the food to be excellent, especially at Vanillia, a stone’s throw from our hotel in Firostefani. Metaxi Mas in the southern village of Exo Gonia is a hit with locals and tourists. Tucked into the hillside, this former traditional Greek home with its vaulted ceiling and thick stone walls turns out delicious local cuisine with an international twist. The lunch bill for our group of six came to 66 euros. Meg, our group foodie, was visibly pleased and “shot” every single dish before happily digging in. We also quite enjoyed the complimentary glasses of Raki, the local “fire water.”

One of our excursions led us up a series of narrow switchbacks to the base of Ancient Thira. Sitting at nearly the highest point of the island, one wonders why this site flourished as a center of trade 2000 years ago. I’m sure it made it difficult for pirates to invade but also equally challenging for the traders who had to haul their wares 1000 feet up from sea level. Our leisurely walk from the parking lot led us up a few more hundred feet through the remains of this Greek, Roman and Byzantine settlement for outstanding views in all directions and a glimpse of ancient secular life and religious practices. 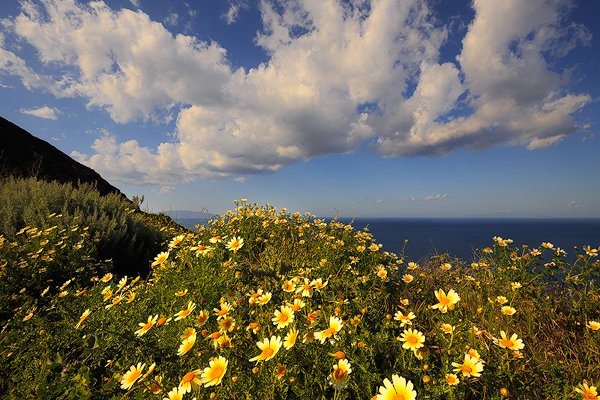 Our hotel in Firostefani makes for an ideal base, in fact I can’t imagine a more perfect fit. Nestled between the villages of Thira and Imerovigli, we had a close-by place to park our 9-passenger van (this can be a challenge throughout Europe). Our group could stroll down the path along the crater rim to the town of Thira or hike up to Imerovigli. Great restaurants, small grocery stores and coffee shops with strong Greek coffee, espresso and tasty pastries are just around the corner. Slowing down and walking the paths in either direction from our hotel makes for great photo ops. We learned the lesson of walking back in the opposite direction and seeing the environment with fresh eyes — a real bargain, two for one! Some of our best images were gleaned on the way back home. 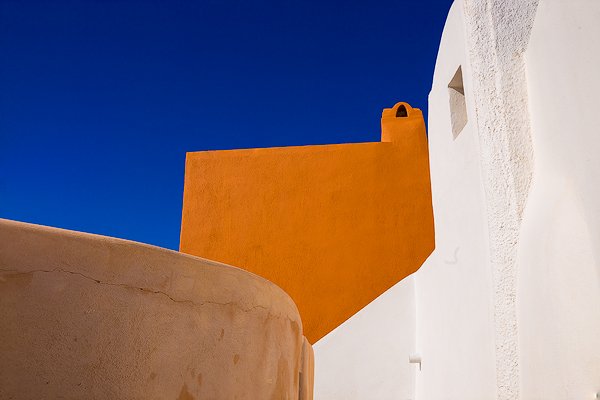 Several times we drove to the northern end of the island to the idyllic village of Oia (pronounced “Ia”), the setting for the movie “Summer Lovers” starring Daryl Hannah. A forgettable movie but a nice visual reminder for those who have visited Oia. I happened to be there in 1981 when the movie was being filmed. It was fun to see donkeys hauling the film equipment into the interior of the village.

Oia is over-the-top charming and photogenic and as a result can be extremely crowded. Tour buses from the other villages and cruise ships begin to arrive at around 5 pm for the world-famous sunsets (the sunset from our hotel in Firostefani was equally superb). As the hordes of tourists make their way out of Oia after sunset, we take their positions on the ridge that provides an outstanding view of the Aegean Sea and the northern end of village. This is the perfect location and time of day to create a stunning photograph. Once all set up with gear and tripods, we wait for the the “blue hour,” actually the “blue 15 minutes,” when the artificial warm light from the village balances with the intense blue ambient light of the sky, creating photographic magic. At Santorini’s latitude this all happens between 30 and 45 minutes past sunset.

The evening blue hour at Oia.

On the pastoral northeast side of the island we visited a couple of Greek Orthodox churches near Pori. We arrived late in the afternoon so that we would have the sun at a low western angle. The photo lessons here was to practice the star burst effect. Stopping your lens down to an aperture of f16 or f22 and obscuring the direct sun in the composition behind an element such as a wall, tree or top of a building and then moving your camera ever so slightly to reveal a bright point of the sun results in a wonderful star burst effect. This is actually quite easy to achieve and with some practice and trial and error we all got good results. The convenience of our cameras’ LCDs provided great feedback to see if we were getting the desired effect. Meg Koh really nailed it with this image. 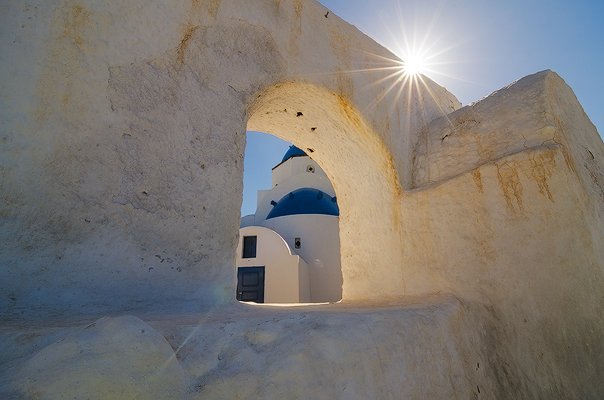 Pyrgos is the highest village on Santorini and a treasure trove for photographers. It also features some very nice restaurants. We had a tasty traditional Greek lunch at Kantouni Cafe before heading up to the top of the village with our camera gear. The 20-minute walk turned into 1 hour for us with so many colorful photo ops along the way. Near the top we encountered this wonderful passageway painted light blue and leading out to a yellow wall. 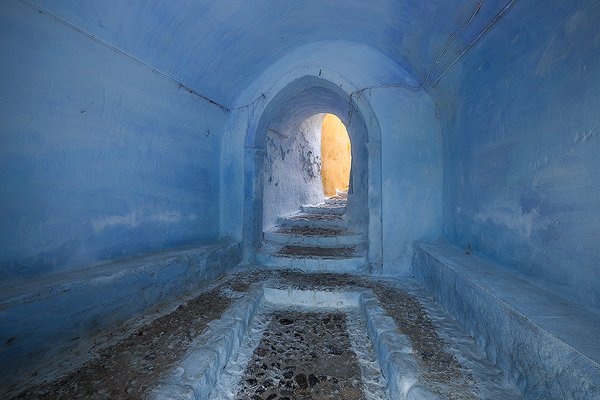 We did not visit the archeological site of Akrotiri on the island’s southern end. To be honest, both Magrit and I found these excavations to be visually underwhelming when we researched them in 2014. However, the fact that these are the remains of a refined Minoan culture and that only 1/13th of the whole settlement has been excavated so far after having been buried deep beneath volcanic ash from the catastrophic eruption of 1613 BC is mind blowing. A guided tour through the ruins would certainly bring this site to life.

Our group greatly enjoyed two museums in Thira, both featuring beautiful pottery and wall paintings from Akrotiri and Ancient Thira. The Santozeum Museum near the cable car in Thira houses reproductions of the famous Akrotiri frescos that were unearthed between 1967 and 1974. The 3D reproductions are amazing and were created with the Kodak Pathe technique which was also used for the Lascaux cave paintings in France. 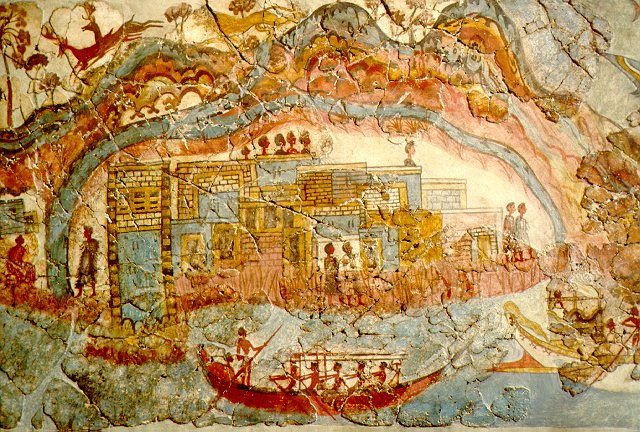 The Archaeoglogical Museum, also near the cable car in Thira, houses items mostly from Ancient Thira.

We also took a boat ride to the small island of Thirasia and visited the AK Foundation, a wonderful gallery of modern art featuring the works of 3 famous contemporary Greek artists just outside of Fira. As a special treat, we even got to meet one of the artists. There are also many wineries one can visit around the island (Santorini is famous for Vin Santo, a sweet dessert wine) for dining and wine tasting — we simply ran out of time.

We found spring to be the perfect time to visit  — a lot less touristy and a profusion of wild flowers. It can get hot or cold (prepare for both) and it’s usually windy.

Santorini is easy to get to — a short flight from Athens or from many European cities — but once you’ve experienced a taste of her magic, she’s hard to leave and we’ll certainly be back.